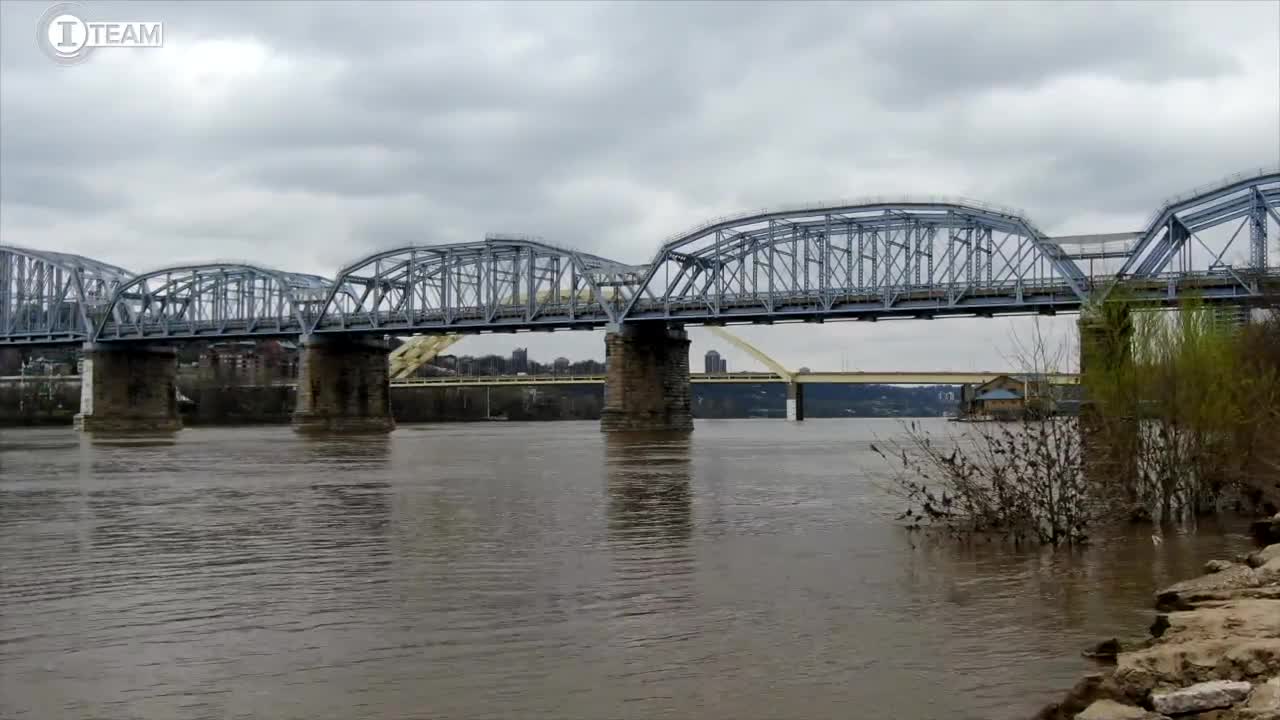 Millions of Americans might someday benefit from a class action lawsuit filed against manufacturers of forever chemicals by Rob Bilott, the Cincinnati lawyer made famous by the movie “Dark Waters.” The Taft Law partner won a $671 million settlement on behalf of 3,500 plaintiffs who alleged chemical giant DuPont contaminated their drinking water with PFOA, a forever chemical used to make Teflon.

CINCINNATI — Jeff Hermes worked for two decades as an airport fireman, spraying acres of aqueous film-forming foam (AFFF) to suffocate flames from jet engine fuel. He is convinced that exposure led to his 2016 diagnosis for prostate cancer.

“You were drenched in foam,” Hermes said. “I used that foam virtually daily and weekly for years and years and years. We weren't told that this is a hazard when people obviously knew."

Hermes is among millions of Americans who might someday benefit from a class action lawsuit filed against manufacturers of forever chemicals by Rob Bilott, the Cincinnati lawyer made famous by the movie “Dark Waters.” The Taft Law partner won a $671 million settlement on behalf of 3,500 plaintiffs who alleged chemical giant DuPont contaminated their drinking water with PFOA, a forever chemical used to make Teflon.

“Our case isn’t just about firefighters,” Bilott said. “It’s everyone who has these chemicals in their blood.”

That could be 97 percent of Americans, based on a 2015 study funded by the National Institutes of Health. Researchers found perfluoroalkyl substances, or PFAS, in serum samples collected for the National Health and Nutrition Examination Survey from 2011 and 2012.

PFAS is an umbrella term for thousands of synthetic chemicals that are used to make non-stick coatings for cooking products, stain-repellants for fabrics and food-package coatings that repel water and oil. They’re called forever chemicals because they don’t break down in nature and they accumulate in the bloodstream.

“The class action that we’re trying to bring at this point is for appropriate health studies and testing,” Bilott said. “We’re not seeking money or damages for anybody who thinks they’ve been injured or harmed by these chemicals.”

The I-Team contacted all companies named in the complaint. None agreed to an interview. But a few of them testified before Congress in September, including 3M, which made the firefighting foam that Hermes used for decades.

“3M ceased producing and selling AFFF more than a decade ago,” Senior Vice President Denise Rutherford told the House Committee on Oversight and Reform. “We will continue to work with our former customers to ensure that unused 3M firefighting foam is properly handled.”

“There are a lot of inconsistencies in the data,” she said. “We accept that there are associations, which are like leads, places that we should continue to look. And we are in fact doing that. But when we look at that evidence there is no cause and effect for adverse human health effects at the levels we are exposed to as a general population.”

Can you avoid PFAS contamination?

For most people, the biggest risk of contamination is from water pollution, said David Andrews, senior scientist for Environmental Working Group, a Washington, D.C.-based nonprofit. In January, EWG found PFAS contamination in the tap water of all but one of the 44 water utilities it tested in 2019. Cincinnati’s PFAS concentration of 11.2 parts per trillion ranked 20th on the list. That’s better than the 70 ppt standard that the U.S. EPA established in a non-enforceable guideline announced in 2016. But it’s 11 times the recommended safe level that EWG endorsed in 2019.

Greater Cincinnati Water Works uses granular activated carbon filtration to remove PFAS chemicals from the water it pulls from the Ohio River, said Jeff Swertfeger, superintendent of water quality. He also said PFAS levels have declined in the river since the 1990s and newer versions of PFAS chemicals do not appear to be as harmful.

“We know they’re there," he said. "We’re concerned about them. But we’re not panicking."

The Northern Kentucky Water District also uses carbon filtration to remove PFAS chemicals, but its water intake pumps in the Ohio River saw some of the state's highest levels of HFPO-DA, a replacement chemical for the more toxic PFOA compound that DuPont phased out in 2009. The Kentucky Department of Environmental Protection tested for PFAS compounds at 81 water utilities across the state. Its November 2019 report found no results above 5 ppt, which is well below the EPA’s most restrictive guideline.

“We think EPA guidelines are inaccurate and behind the times,” Andrews said. “Many states are setting limits for multiple PFAS in the 10 to 20 parts per trillion range, significantly below where the federal EPA has set their health advisory value.”

“You can take steps to reduce contamination. At this point, I don’t think it’s possible to eliminate it,” Andrews said. “There’s increasing evidence and recent studies that actually highlighted concerns about the chemicals that are still being used in products occurring in high levels in dust in the home that may actually be inhaled or dermally absorbed through the skin. So, it is quite possible that our exposure is from consumer products and treated products that are in our home.”

The cost of PFAS exposure

Hermes wishes he knew all of that when he joined the U.S. Air Force in 1983.

“These are dangerous chemicals. I feel like somebody knew that. But it never got to the end user, which was us,” he said. “I have friends that I’ve worked with over the years that are dead from various types of cancer that can all be linked to this chemical.”

Bilott said the case is even more important in the age of coronavirus because some studies have linked PFAS compounds to “decreased immune system response,” which could make it harder for people to resist and recover from COVID-19.

“What we’re trying to do through this lawsuit is actually get the science confirmed, get the studies and the testing done that will actually be able to tell us exactly what’s going on with these chemicals,” Bilott said. “The companies that are putting those out, putting them into our water, putting them into our blood, shouldn’t be able to say, ‘You folks haven’t been able to prove whether they cause those problems yet,’ and at the same time not provide any of the money, any of the funding necessary to do the studies.”

The financial cost of PFAS litigation is now measured in tens of billions and that could rise, according to recent estimates by Gordon Haskett Research Advisors. Analyst John Inch estimated the net present value of 3M’s future liability at $14.5 billion; DuPont’s at least $5 billion.

“It increasingly appears to be only a matter of time in our opinion before at least some PFAS chemicals are declared hazardous substances” under federal Superfund guidelines, Inch wrote. “Under Superfund, the remediation scope for projects would prospectively be substantially increased while also advancing the timeline and the cost for the designated polluters.”

Bilott declined to estimate how much his case could cost PFAS makers, although he did say DuPont spent over $100 million on a court-ordered scientific study in his 2017 "Dark Waters" case. That paid for blood samples from 70,000 people and 12 different epidemiological studies involving one chemical, PFOA. Does that mean it would cost exponentially more to study millions of people, thousands of chemicals?

“We would leave it up to the scientists to advise the court,” Bilott said. “What’s the most efficient way but also the most effective way? Particularly if the companies are saying there isn’t sufficient evidence, what do the companies say is sufficient to confirm what these health effects are?”

It’s still too early to say whether the case will cost chemical companies anything. Bilott scored two recent wins. In October, U.S. District Judge Edmund Sargus in Columbus refused to dismiss the case based on the manufacturers’ arguments that the court lacked jurisdiction. And in February, a South Carolina court rejected the manufacturers’ attempt to transfer the case to a judicial panel that has combined jurisdiction over multiple cases alleging contamination caused by firefighting foams.

But the case is bogged down by coronavirus closures of the federal court system and legal maneuvering over the timing of document requests, depositions and a hearing on whether to certify the case as a class action.

In the meantime, Hermes is trying to decide whether to renew his request for disability payments. The U.S. Department of Veterans Affairs denied the claim in 2016, saying he failed to prove his cancer was caused by the foam he used while serving in the U.S. Air Force from 1983 to 1987.

Hermes, 54, lives in rural Boone County and serves as chief of the Belleview McVille Fire District. He thinks the removal of his prostate eliminated the cancer. But he has struggled with urinary incontinence and erectile dysfunction, two common side effects of the surgery.

“The changes in your home life, your marriage, the relationship with your spouse is forever different,” he said. “So, it does take an emotional toll. Nothing will ever be the same. And I’m OK with that because I’m still alive and I’ve got friends that aren’t.”