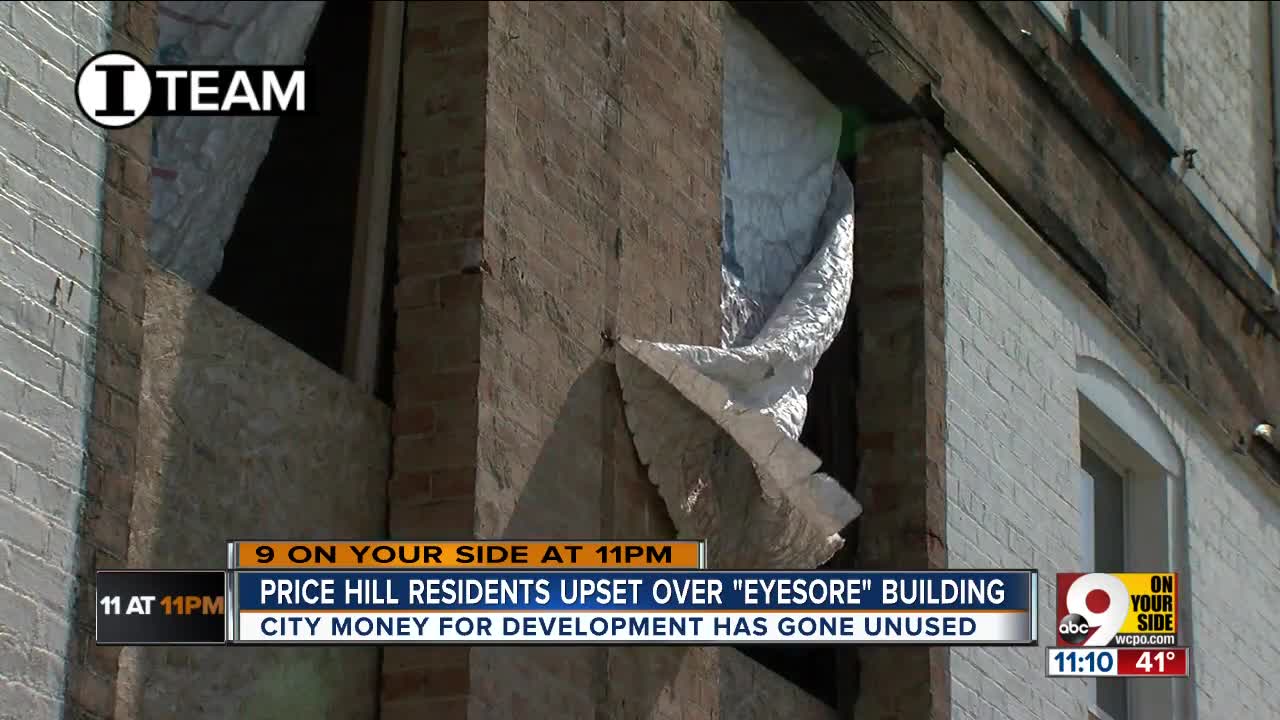 City council voted to give a $315,000 loan to developer KB Partners in May 2016 to renovate the problem apartments into new townhomes. It was meant to be a cornerstone project for the burgeoning Incline District, down the street from where KB Partners had built a new wine bar, coffee shop, art gallery and Mexican restaurant. But neighbors say the Price Avenue apartment complex is an eyesore. 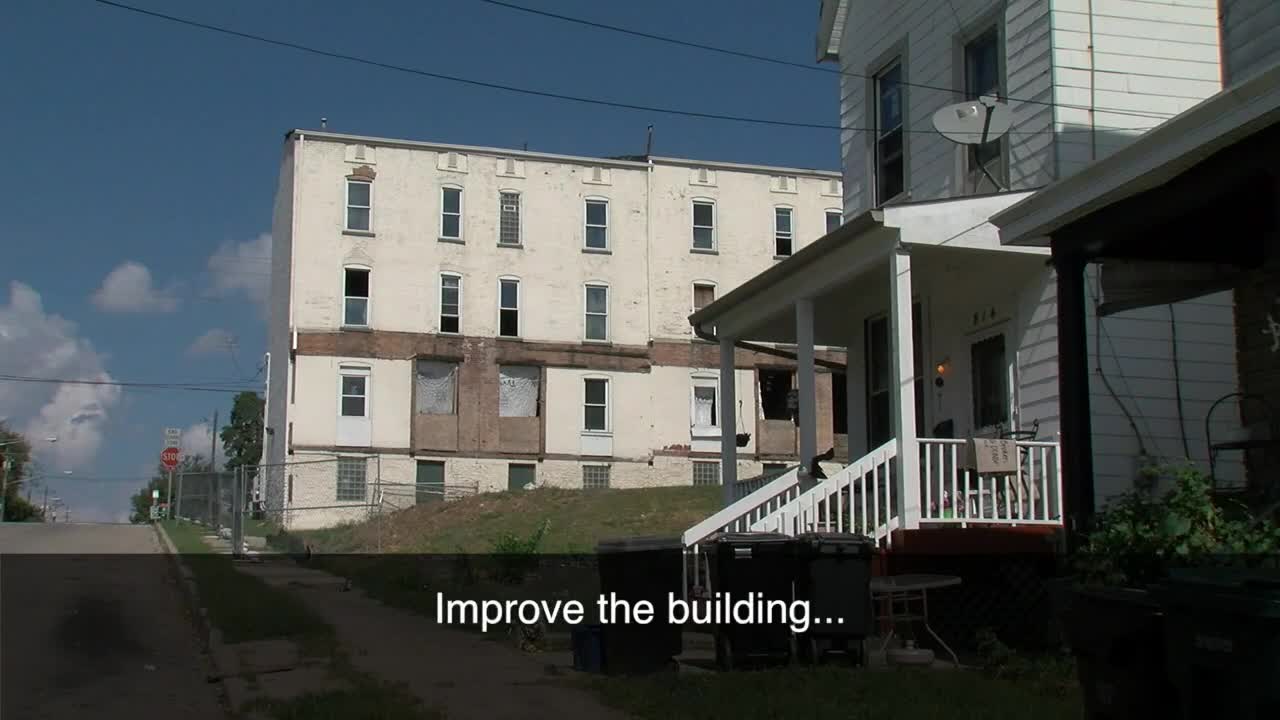 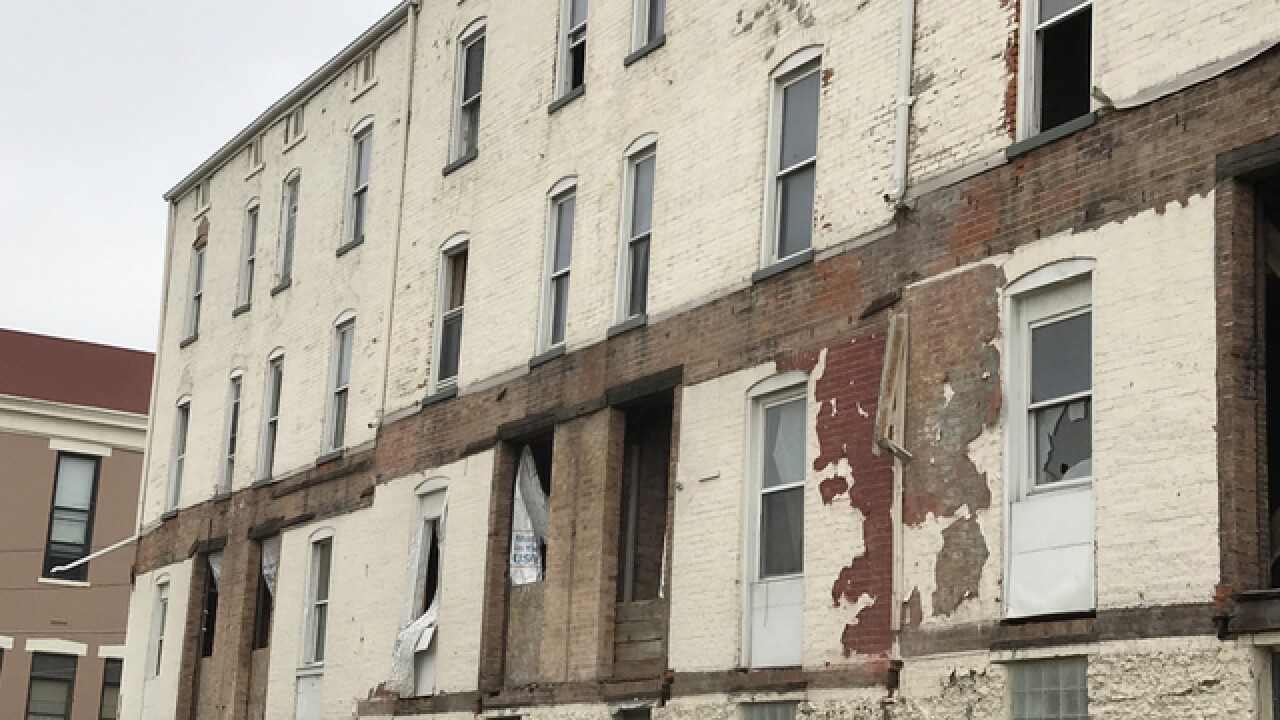 CINCINNATI -- Denise Yates has lived in East Price Hill for 25 years in a simple row house that was built in 1887.

She lives behind a large brick apartment complex at 2911 Price Avenue that was once a hotspot for open-air drug deals and crime.

Then the city of Cincinnati got involved.

City council voted to give a $315,000 loan to developer KB Partners in May 2016 to renovate the problem apartments into new townhomes. It was meant to be a cornerstone project for the burgeoning Incline District, down the street from where KB Partners had built a new wine bar, coffee shop, art gallery and Mexican restaurant.

But neighbors say the Price Avenue apartment complex is an eyesore.

What’s been done to this building, more than two years after taxpayers spent hundreds of thousands to help renovate it?

“Nothing. It’s just been sitting here,” Yates said. “I never see anyone working on it.”

The owners of KB Partners, Bill Buriwinkel and Tom Koopman, both declined interviews.

But neighbors have been outspoken, complaining to WCPO for months about the building's collapsed back porches, falling downspouts and gutters, exposed doors, broken windows, roof line holes and missing chimneys.

“It bothered me because it was dangerous - the back doors were open, and the windows had been open ever since they bought it,” said Theresa Thomas, who owns several nearby properties. “Anybody else would have gotten right away fined, or put in jail.”

It got worse in early September when a storm blew the roof off the building. Roofing hit the side of Yates’ house, damaging her gutters and downspouts.

“So now when rains, and if it rains real bad, it drips in my house, in my kitchen,” Yates said.

“We’d like to see them do some emergency repairs and put up some tarps. It’s worrisome because winter is coming,” Warminski said. “It’s an important building on the street because it is so visible and it’s on the corner of a revived business district.”

But Art Dahlberg, director of the city’s buildings and inspections department, said his office has been monitoring the condition of the building.

“I believe that within the next year or so we’ll start to see substantial improvements," Dahlberg said, adding that owners are waiting for an insurance claim to make repairs.

“We have a major rehab that’s going to take place and … they’ve already applied for some of the permits relating to that,” Dahlberg said. “That’s a little bit different than, say, a rental property where there has been roof damage, and there are still people living in the house, and there’s water getting into their unit. So we treat vacant buildings differently than we treat occupied buildings.”

The apartment complex, although vacant and roofless, is still an improvement over the blighted, problem property it once was, city leaders said.

“I remember driving through Price Hill and looking at that particular building and thinking, ‘Oh gosh, that looks like a problem,’” said assistant city solicitor Mark Manning.

Since KB Partners has owned the building, police calls have plummeted, Manning said.

“When you look at the crime statistics for the years prior to the current ownership, you would see things like gun arrests, drug arrests,” Manning said.

KB Partners has until 2021 to finish the project, under the terms of its fully forgivable loan with the city. Once construction finally begins, Dahlberg believes it will be a “game changer,” for the neighborhood.

“I relish the thought of what’s going to happen there,” Dahlberg said.

But that’s not how Yates sees it. She has to look at the dilapidated building every day.

“I feel it’s a shame because the money could have went into the community to do something to really uplift the community,” Yates said. “This makes everything up here look bad. It really does … It’s a shame, the building is sitting here downgrading Price Hill.”

The fight over the Price Avenue apartment complex has exposed a deep divide between longtime residents and developers in Price Hill’s Incline District.

Neighbors complain about lack of transparency. They say the city never asks for community input, instead giving preferential treatment – and plenty of free land – to one developer.

In the last 15 years the city has given five properties to KB Partners, and Hamilton County’s land bank has sold the developer eight pieces of land – at no cost, according to data from the county auditor’s website.

The city and land bank also sold the developer a handful of vacant land parcels for less than $1,000, often to create parking lots for the new business district.

“If you go up to Price and Grand and just stand at the intersection now, as compared to 10 years ago, you don’t see blight and terrible building conditions and crime,” said Phil Denning, the city’s director of community and economic development. “You see manicured lawns and houses that are being rehabilitated and sold. Condos and apartments for rent. Businesses that are employing people and bringing vibrancy to the area. I think that’s the real story here.”

But many residents see it differently. They worry the fate of their neighborhood is being decided by a single developer.

City leaders say KB Partners has invested millions to revitalize Price Hill, taking interest in the neighborhood a decade ago, when no other developer was interested.

“Nobody would touch it. The only group that came through, like a guardian angel, was KB Partners,” said Mayor John Cranley, who grew up in Price Hill. “Most people would be afraid to go there five years ago. What he has done is amazing.”

Cranley points to Somm Wine Bar at 3105 Price Avenue, which opened in 2016. The restaurant’s lighted back patio has a fire pit and water fountain. On Friday nights a jazz band plays.

“Just five years ago you would feel unsafe," Cranley said. "There were shootings on that corner all the time."

While residents appreciate these new businesses, they say it’s still no excuse for KB Partners to delay work on the apartment complex.

“Certainly they’ve been connected with some positive projects and no one wants to seem ungrateful for that, but there’s a lot more to the story,” said resident Laura Hamilton.

“Ironically we’ve paid, as the taxpayer, to help this building along … now it sits here in this state of complete disarray."

Neil Shaw has owned Red’s Deli on Price Avenue for 23 years, just a block away from the controversial apartment complex.

He’s been trying to expand his business for two and half years, overcoming several city code and planning obstacles. Now he is trying to get financing.

He is frustrated that KB Partners gets free land and a large city loan for its developments, while he has to pay for a simple expansion to his deli and grocery store.

“They get freebies all the time,” Shaw said. “Look be fair, okay. You’re giving benefits to KB in many ways, and we don’t see it.”

But Denning says the city’s development department is willing to work with anyone.

“We answer the phone no matter who calls," Denning said. "And so whether that’s a very capable community development corporation, whether that’s a one-off property owner who wants to make some improvements, other nonprofits that are invested in neighborhoods, we say yes to all of them.”

Napoleon Givens lives across the street from the Price Avenue apartment complex, and believes his fellow neighbors just need to be patient.

“People are anxious to see it happen quicker, so I can understand,” Givens said. “This guy (Bill Buriwinkel, a KB Partner owner) has a proven track record and in my opinion he is genuinely interested in how Price Hill looks and feels, and he wants people to enjoy it.”

Many leaders believe this is just the beginning of what will be a great revitalization in Price Hill. But they admit that better communication with residents could improve the dynamic here.

“Community relations and neighborhood relations don’t come naturally to private developers,” said Jeff Cramerding, chairman of the Price Hill Will board of directors.

“I think going forward we’ll see more and more private developers, and more and more competition, which is what happens when a neighborhood starts to see revitalization,” Cramerding said.

Going forward, the community development corporation will try to encourage better communication between developers and the residents who have lived here for generations.

“Our neighborhoods didn’t get this way overnight and they’re not going to change overnight … it takes time,” said Price Hill Will executive director Rachel Hastings. “It takes people communicating with each other on a regular basis in a language everyone can understand.”