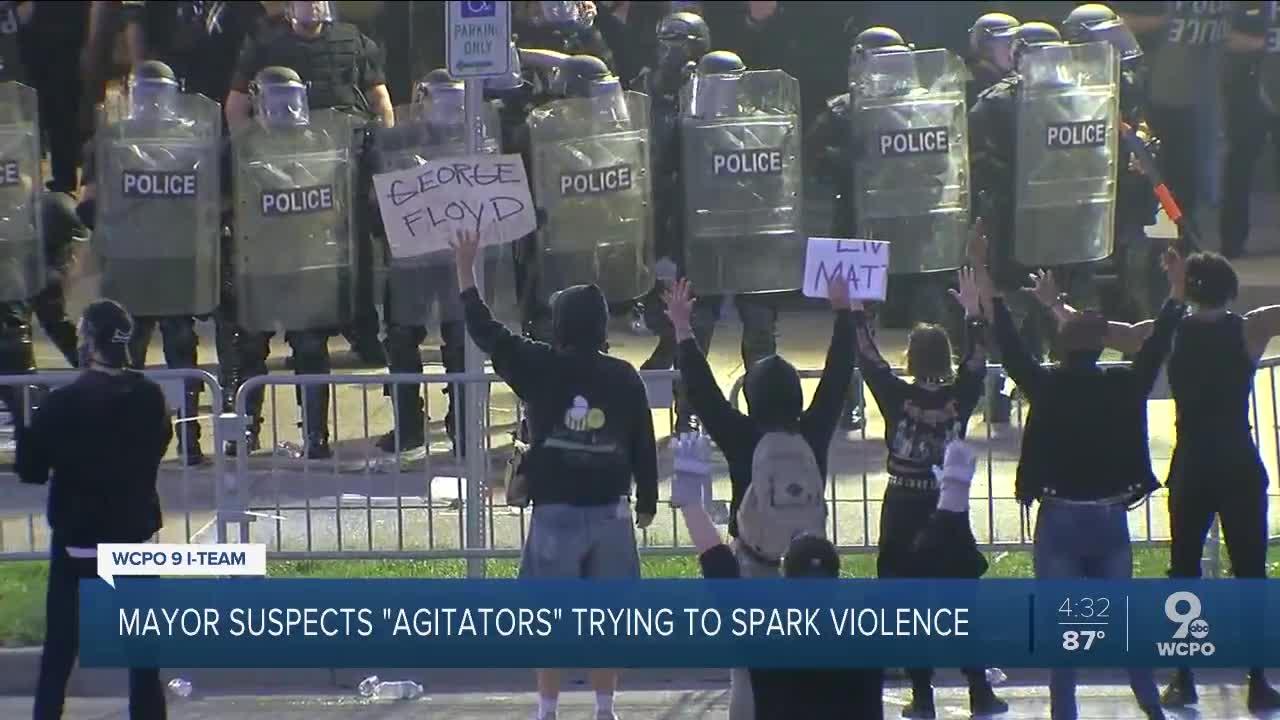 Cincinnati Mayor John Cranley described a frightening moment on Saturday evening that he says may prove the existence of outside agitators who are trying to incite violence and provoke police during peaceful protests here.

CINCINNATI — Cincinnati Mayor John Cranley described a frightening moment on Saturday evening that he said may suggest outside agitators are here trying to incite violence and provoke police during peaceful protests.

This comes as authorities nationwide investigate extremist groups for disrupting protests across the country in recent days and stoking violent confrontations.

“There is a group of people who are maybe right wing, maybe left wing, but are clearly agitators. And some people might even believe they are paid agitators,” Cranley said. “They are clearly not there to peacefully protest police actions or law enforcement in general. They are there to cause havoc.”

In an interview with WCPO, Cranley described what he saw happen while protesters peacefully demonstrated in front of Cincinnati Police District One Headquarters on Saturday at about 8:30 p.m. A Cincinnati police spokesman confirmed his account.

Between eight and 10 white men and women “were clearly coordinating with each other. They were walking around the building, taking notes,” Cranley said.

“You would have some of these folks try to get all the way around the building, and they were clearly taking notes on how many cops were there, looking at windows and entrances to the building,” Cranley said.

On the other side of the building, Cranley said, he saw a white man who appeared to hold an incendiary device and repeatedly point to a window.

“He was consistently pointing to a window in full view of the cops,” Cranley said. “He clearly knew he was being watched.”

“This guy went through the motions of pouring a liquid very conspicuously onto his shirt or a rag … and when he went to throw it, fireworks went off at the same time,” Cranley said. “Then a whole bunch of water bottles were thrown at the cops at the same time.”

Cranley believes their intent was to “provoke a response from police, presumably to get the cops to fire into the crowd.”

Minutes before, Cranley said, he saw a white woman ride by on a bicycle and distribute Popsicles to children at the protests.

“It seems coincidental that it was 10 minutes before the action that they took that she was getting the kids out of the way,” Cranley said. “I can’t prove that it was related, but it seems mighty coincidental. If they believed they could get the cops to overreact and shoot … that might have been an intent to get the kids out of harm’s way.”

Molly Broscoe, a doctoral sociology student and researcher at the University of Cincinnati who specializes in white supremacist movements, said it would not surprise her if extremist groups were active at police brutality protests in major cities.

"The city of Cincinnati itself doesn't have as strong an organized white supremacist presence as Dayton does, so a lot of the time, if they're here it's because they've traveled from elsewhere, more central in the state,” Broscoe said.

While Ohio doesn’t have the same problem with extremists as states such as Washington or Colorado, she said, there is still activity here.

In Cleveland, authorities blamed weekend violence on out-of-state agitators. But WCPO's sister station there reported that all 120 people arrested had Ohio addresses.

Columbus police asked for the public’s help on Sunday to identify a white man who allegedly paid people to destroy property and riot during weekend events.

Several members of an alt-right group were also outside the Ohio Statehouse in Columbus in April protesting Gov. Mike DeWine’s stay-at-home order due to the COVID-19 pandemic, Broscoe said, which media reports confirm.

Meanwhile the FBI said Monday that it wants the public’s help in identifying “violent instigators” who are exploiting peaceful protests nationwide.

“If the alt right is showing up at protests against police brutality currently, they are not doing so in good faith,” Broscoe said. “They’re doing so to disrupt … They might be infiltrating; they might be counter-protesting.”

WCPO surveyed arrest records from the weekend and found people taken into custody in Cincinnati were from at least three other states. But numbers of out-of-state arrests are low and it is unknown if anyone is affiliated with an extremist group.

Police data show the majority of those arrested for violating curfew are white.

As protests continue nationwide, and in Cincinnati, authorities urge people to be careful.

“You may be sitting next to or standing next to somebody who has far more insidious intentions,” Cranley said. “The real protesters – the people who are there to express their opinions – outnumber the bad guys. But then late at night, and especially as it gets close to the curfew hour, these infiltrators are clearly trying to cause chaos.”