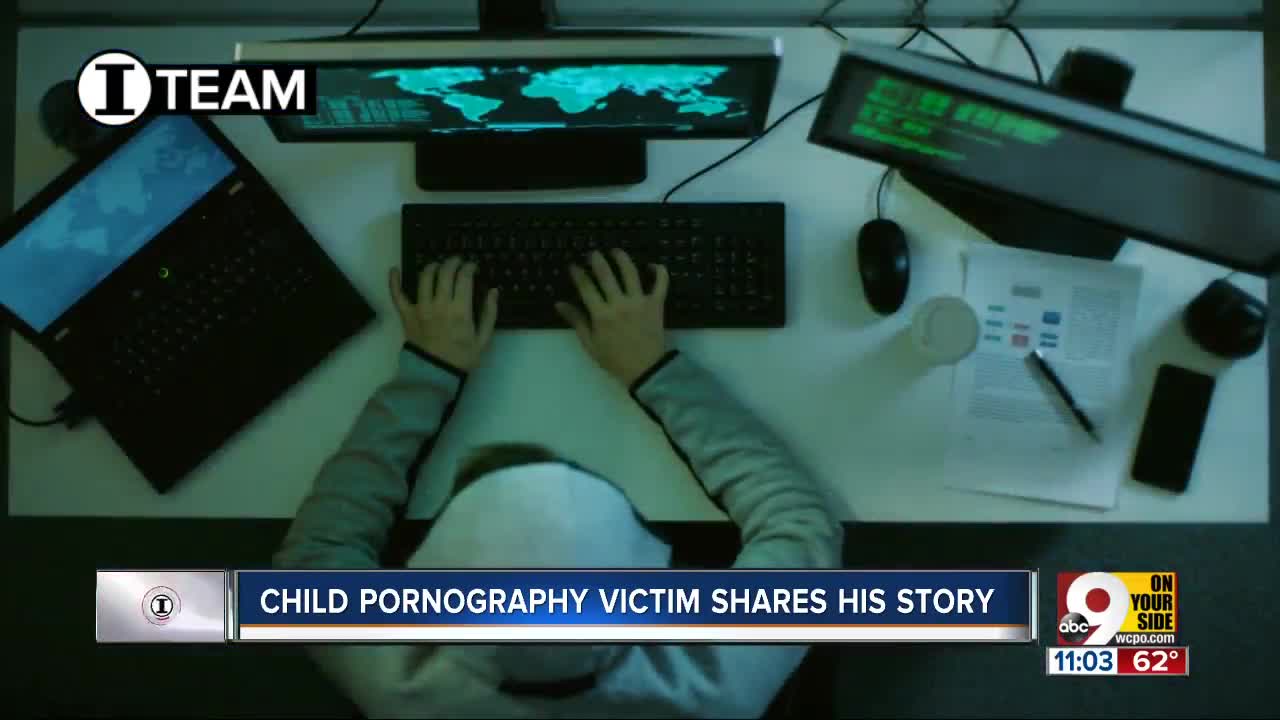 WCPO investigates the distribution of child pornography, its impact on victims and what's being done to stop it. 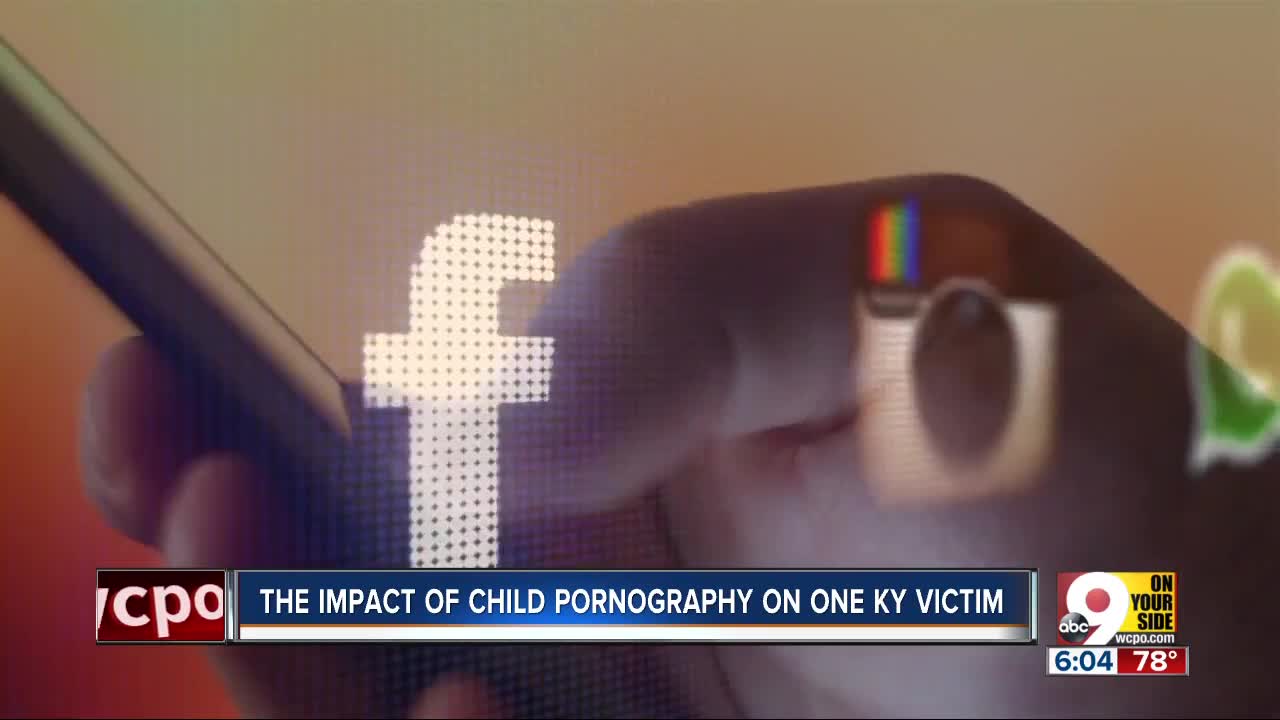 CINCINNATI — 'Solomon' was sexually assaulted for the first time during an overnight trip in Kentucky.

"I don't have a legacy that doesn't involve being raped as a child," Solomon told the WCPO I-Team.

Solomon said his abuser also took photos and videos of him posing naked, then sold them online.

Those images can still be found online, according to documents that federal prosecutors in the Southern District of Ohio filed in child pornography cases.

"It's worse than the actual abuse I went through," Solomon said.

Solomon, now in his 30s, said he is sharing his story publicly for the first time to shine a light on child pornography and the terrifying effect it has had on his life.

Solomon's code name is a pseudonym, just like other pseudonym's federal court documents use to identify 'Lily,' 'Andy,' ‘'Pia,' 'Maya,' 'Chelsea,' 'Violet' and so many other victims. We will refer to Solomon by this pseudonym in order to protect his identity.

"I can't get away from it. Ever," he said. "I don't expect you can heal from something like this. It's just too deep."

WCPO has spent several months investigating the distribution of child pornography, the challenges facing law enforcement, the relentless impact it has on victims and what is being done to address it.

The sexual exploitation of children online has been growing exponentially each year, according to the The National Center for Missing and Exploited Children.

The center's CyberTipline received more than 18.4 million reports in 2018.

That's nearly 33 times the number of tips provided to the CyberTipline from 2002-2012, according to a 2019 study of data received and analyzed by the NCMEC.

The same study found that one image of a child being sexually abused had resurfaced 491,200 times.

Law enforcement is more concerned than ever about how easy it is to upload and share pornographic images of children without being detected.

"This is one area where technology has made this problem a lot worse," United States Attorney Ben Glassman said.

Free encryption software and end-to-end encrypted networks enable users to hide their images from everyone except the person receiving it, Glassman said.

When he was a teen, Solomon said stalkers tracked him down and banged on the windows of his home after seeing the photos of him online.

“I never really talked about it with anybody. I tried not to think about it,” Solomon recalled. “I pretty much pretended it didn’t exist.”

He experienced anxiety, depression and the constant fear strangers would recognize him.

So he used alcohol and drugs to attack the memories and ease his suffering, but he said it only made things worse.

Eventually, through the support of his girlfriend, counseling and a renewed faith in God, Solomon became more focused and less self-destructive.

But despite some improvements in his life, he still can’t sleep for more than 2-3 hours at a time.

The combination of physical, mental and emotional trauma makes it more difficult for him to keep a job, pay for counseling and treatment, and maintain the kind of relationships many of us take for granted.

“It makes you just want to curl up in a ball and hide away from the world,” he said.

The technology used to identify online child pornography, called PhotoDNA, has been available for a decade.

The Microsoft platform creates a "unique signature" for each image, then allows users to compare those markers to previously identified images of child pornography, according to the Microsoft website.

If the signatures of the images match, the platform flags the content allowing host companies to identify it and alert the National Center for Missing and Exploited Children, which also uses PhotoDNA.

The NCMEC is the national reporting center for child victimization and is responsible for referring those cases to law enforcement.

"We gave it to the technology companies for free," University of California, Berkeley Professor Hany Farid told WCPO. "We are simply asking them to do the right thing."

Farid was a Dartmouth professor in 2009 when he developed PhotoDNA in partnership with Microsoft.

According to Microsoft, the Internet Watch Foundation figured out a way to use PhotoDNA to search videos.

Microsoft also makes PhotoDNA for video available for free, according to its website.

WhatsApp, which is owned by Facebook, provides default end-to-end encryption for its 1.5 billion monthly users.

It also uses PhotoDNA to "scan profile pictures" for known sexually exploitative images of children, according to WhatsApp.

WhatsApp's site says it uses "all unencrypted information including user reports to detect and prevent this kind of abuse."

As a result of that systemic approach, WhatsApp said it had removed about 250,000 accounts each month from November 2018 through January 2019.

"If people are doing bad things on your platform you should eliminate them," Farid said.

Tech companies provide 99% of the tips to the CyberTipline, according to the NCMEC.

But, there are still plenty of 'dark' internet highways.

Richard Stamper of Fairfield was a registered sex offender when he used the Tor browser in 2015 to regularly access child pornography, according to documents filed by federal prosecutors in the Southern District of Ohio. Those documents also say Tor's primary function is to conceal the IP addresses of users.

The I-Team examined Stamper's case in 2018 as part of a broader investigation.

WhatsApp emphasized that it only uses PhotoDNA to search profile pictures.

Tor said its software provides "a vital tool for millions of people who want to access the internet freely and privately" and that "it's easy to pick out bad actors and turn them into a story, but it's the silent majority of others working for good which are actually inspiring."

According to federal prosecutors in Cincinnati, Stamper's collection included thousands of photos and more than 100 videos.

Richard Stamper entered a 'conditional plea' of guilty in August 2018 to possession of child pornography.

The plea allowed him to appeal the decisions by the U.S. District Court judge relating to suppression of evidence and discovery.

Stamper filed the appeal in May of this year.

The Court of Appeals has not ruled on the case.

Under federal law, Solomon and other victims of child pornography can file claims for restitution from the individuals convicted of possessing or distributing images documenting their abuse.

“I had no idea to the extent these letters would arrive on my doorstep,” Solomon said. “It’s sickening.”

Carol Hepburn, Solomon's attorney, said the U.S. Department of Justice emails her 1,000 notices a month – equivalent to about 50 per client - notifying her that law enforcement investigating child pornography has identified one of her clients.

After receiving requests from federal prosecutors in Glassman’s office, U.S. District Court judges in the Southern District of Ohio have ordered men convicted of possessing Solomon’s images to pay him thousands of dollars in damages.

Solomon has used the money to pay for counseling and the loss of employment he blames on his ongoing struggle with anxiety, depression and anger.

“That to me is just a measure of how evil this crime is,” Ben Glassman said. “It’s a crime that exacts great harm on every victim, every time.”

Researchers have discovered most victims seen in images of child abuse experience lasting guilt and shame, and often believe they are also responsible.

That anxiety can be crippling at times, Solomon told WCPO.