Before you violate social distancing rules, beware: your neighbor is watching 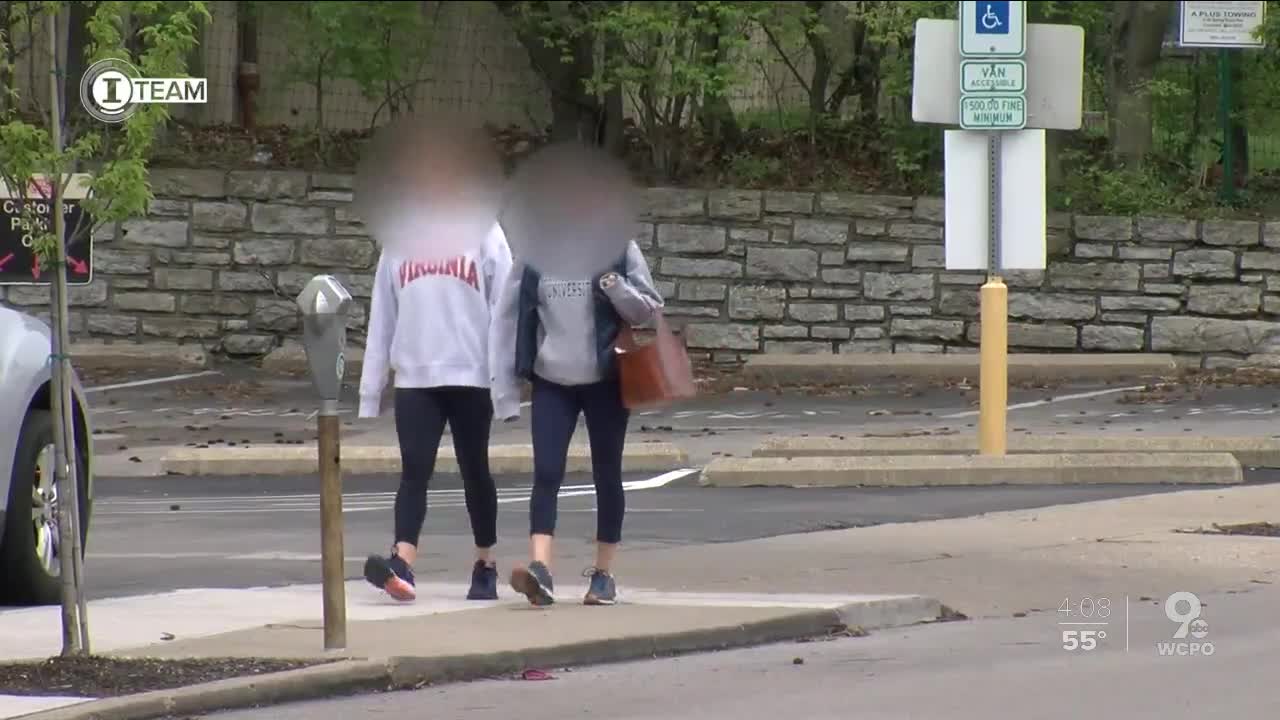 Cincinnati police report a growing number of calls over social distancing violations, while neighbors are taking to shaming each other on social media.

CINCINNATI — Donna Kinney is worried about the spread of coronavirus in her Hyde Park neighborhood.

A cancer survivor who is 75, she always wears gloves and a face mask on the rare occasions when she leaves her home.

She is not afraid to speak up when she sees others who may be ignoring social distancing rules by standing too closely together or gathering in crowds.

“We can’t get things better if we don’t speak up. It’s like if you see a crime and somebody will say, ‘Well I thought somebody else was going to call the police,’” Kinney said. “You can’t do that.”

Cincinnati police report a growing number of calls over social distancing violations, while neighbors are taking to shaming each other on social media. The frequent arguments on the Nextdoor social networking service reveal a sharp divide between what some think is an innocent outdoor activity and others believe is dangerous to the spread of the COVID-19 virus.

Kinney’s comments on Nextdoor a few weeks ago were some of nearly 400 posts about a controversial topic these days: whether customers gathered in front of Graeter’s Ice Cream in Hyde Park Square were violating social distancing rules.

“They were congregating outside like it was the middle of summer,” Kinney said about customers who sat on benches eating ice cream. “Then they went over into the park and sat like it was a normal day.”

Graeter’s is considered an essential business and allowed to stay open during Ohio’s stay-at-home order. But that didn’t stop dozens of Hyde Park residents from arguing back and forth over social media about whether eating ice cream outside was a harmless pleasure for families during a difficult quarantine, or a dangerous activity that would hasten the spread of the highly contagious virus.

“Our mission now is simply to ease some of the hardships that this virus is imposing by staying open as best as we can to bring some familiar comfort food to our guests,” said Graeter’s Ice Cream CEO Richard Graeter. “We ask everyone, wherever you are standing on the public sidewalk, to exercise common sense and maintain proper social distancing.”

Kinney called Graeter’s corporate headquarters to complain about the crowds outside its store. But she didn’t call Cincinnati police.

But plenty of others do call 911 or the non-emergency number for Cincinnati police to complain about social distancing violations.

Cincinnati police classify these calls as reports of disorderly crowds. The number of those complaints jumped from 84 in January to 207 in March. So far police have received 271 calls as of April 17.

“Our first format in talking to people is to ask them to cooperate and break up the crowds and engage in voluntary compliance,” said Cincinnati police Lt. Steve Saunders. “If that doesn’t happen we’ll continue to warn them if they don’t move on and separate, if they’re not gathering for essential purposes, then they might be subject to fines or potentially arrest.”

Two weeks later police arrested Rashaan Davis after he livestreamed himself drinking and dancing outside in Over-the-Rhine, huddling close together with over 20 other people and bragging that they did not care about the risk of catching COVID-19.

“This is how we do it in my city,” he said at one point. “We don’t give a f*** about corona. This is how we celebrate our coronavirus.”

More than 100 Cincinnati residents have also sent questions and concerns about COVID-19 to the city’s website during the past month.

Citizens can submit a general inquiry or report a business violation or public gathering, which are then referred to police or the city’s health department. Some residents criticize businesses that should be closed or employers who are not providing masks and gloves to employees.

But many others complain about activities in their neighborhood that they believe are unsafe.

“Please send somebody to stop that ice cream truck from driving around the neighborhood and enticing the people in the neighborhood to come out in large numbers and buy ice cream without social distancing or protective gear,” a College Hill resident wrote on April 3.

A Downtown resident urged city officials on March 24 to “sanitize all outdoor ATM machines and crosswalk buttons in the city. As a worker, I am seeing people coughing and touching these items very often daily.”

“We’ve gone out, we’ll talk to people and we’ll explain to them what good social distancing is,” Murphy said. “If they still knowingly violate it and they kind of force our hand, we would more than likely have to issue them a citation. But we have not had to do that yet. Most people are responsive to our requests and basically asking them to stop doing what they’re doing.”

Across the river, police in Kentucky are reporting very few social distancing complaints, in part because those calls are directed to a state health department hotline and not local law enforcement.

“The actions that have been put in place by the different state governments are a little bit different. Governor DeWine and Health Director Acton’s – it’s more of a stay-at-home order where ours is more of a social distancing order,” said Covington Police Assistant Chief Brian Valenti.

“In the beginning we had some complaints at parks and whatnot. The governor has since closed the parks … all of the parks have either been roped off or taped off and basketball rims have been removed. So that really helped,” Valenti said.

Newport police haven’t received any complaints about social distancing violations. The only place where Newport Police Chief Chris Fangman said he has seen complaints is on social media.

“We monitor them on social media and that’s the only place we’ve seen the complaints,” Fangman said. “You really got to take it with a grain of salt, because anybody with a keyboard can get their opinion put on there.”

In fact hundreds of people regularly post complaints on Nextdoor across the city’s East Side neighborhoods. They report coughing joggers, landscapers with backpack blowers and neighbors who host too many visitors.

“I just saw four high school-age kids come out of the house across the street and join up with a couple others and take off walking. No masks or social distancing; just like any other day to them. Parent is at work so a lot of times the kids hang out there in the house or shooting hoops out front. Really makes me angry because my daughter is one of the nurses working the COVID-19 wing at a local hospital,” a Fairfax resident posted on April 6.

“We have not really received any complaints, just questions on the status of essential personnel and how it's determined, in which we referred to Governor DeWine’s … guidelines,” Bronson said.

But in nearby Mariemont, Mayor Bill Brown posted a note on Nextdoor on April 14 asking residents to discuss with their children and teens the importance of not gathering in groups.

"Children should not have in-person playdates while school is out,” he wrote.

As long as the coronavirus is around, Kinney doesn’t see the complaints on social media ending anytime soon.

“If I see something that I don’t think is right, especially now, I’m going to challenge it,” Kinney said. “If I don’t think it’s right, I’ll speak up.”