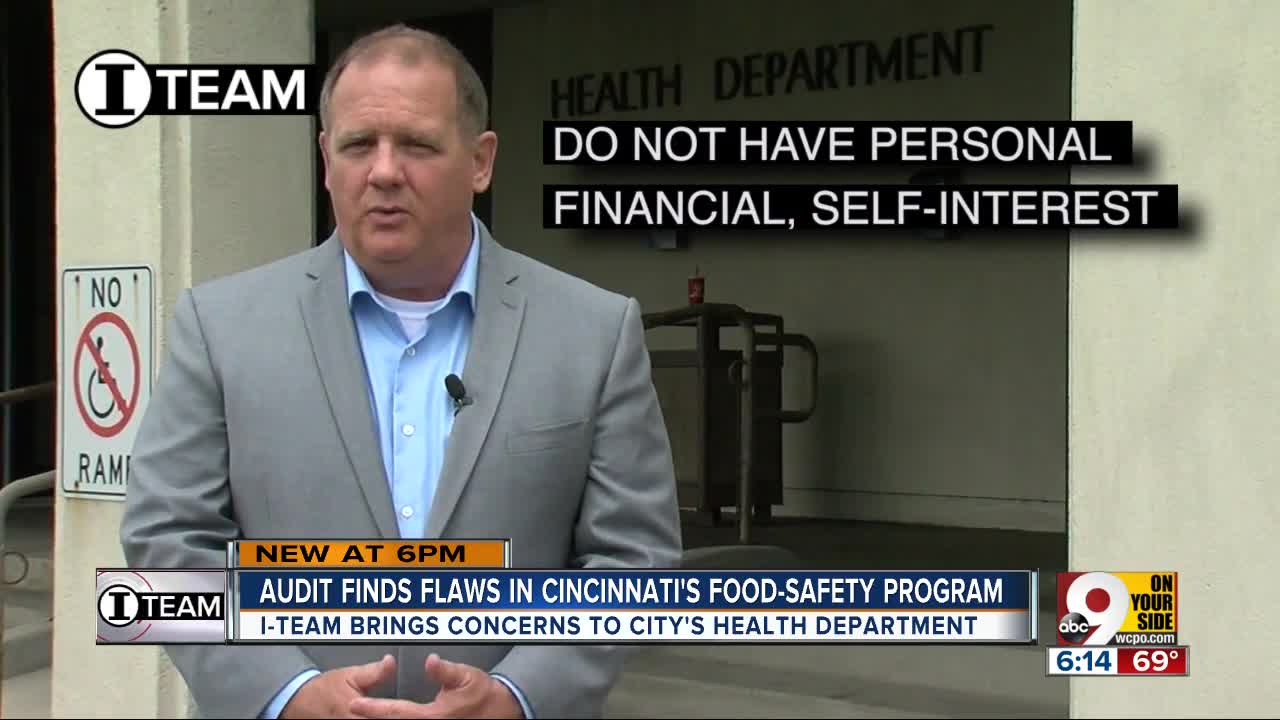 They stand between you and foodborne illness. But do Cincinnati's restaurant inspectors have the tools and time they need to do the job right?

Cincinnati Health Commissioner Melba Moore welcomed the critique and promised to get “more boots on the ground” by reclassifying two vacant, senior-level positions as inspectors as soon as next month. But she stressed that diners in Cincinnati are already safe because the eight inspectors that enforce food-safety rules are experienced and well-trained.

“No, I don’t think it’s a risk,” she said. “My team is quality. And the extensive training that they receive, it’s a blessing to have them.”

The food-safety program has 14 employees who enforce Ohio health codes at 2,500 licensed facilities in the city, including restaurants, schools, grocery stores and stadium concession stands. But only eight of those employees conduct inspections on a full-time basis. The audit found those inspectors have caseloads requiring between 485 and 694 inspections per year. The U.S. Food and Drug Administration recommends sanitarians conduct no more than 320 inspections annually.

“The minimum number of inspections required per sanitarian is sometimes double the amount of work set forth by (FDA) guidelines,” the audit said. This means “work performed by sanitarians may be done quickly and hastily while jeopardizing a thorough and complete investigation.”

Adding two inspectors to the mix would bring the group’s average number of inspections down to about 450, but that’s still above FDA guidelines.

But, he said, they are busy.

“When they’re here, they do a thorough inspection,” Singh said. “We see them like twice a year. Talking to some of them, that’s what they say, they have a lot of workload.”

Antonio Young, who oversees the food-safety program as the city’s director of environmental health, said the city makes up for staff shortages with inspectors that average 15 years of experience. Five city inspectors have advanced degrees.

“They’re all FDA-trained and certified,” Young said. “It’s very rare for a health-inspection staff to have that kind of certification. That gives them the aptitude to look out for things that might lead to foodborne illness.”

Complicating the staffing issues: A supervising sanitarian is now pulling “double duty” as a manager of inspection staff while working in the field during food festivals and processing new license applications for food trucks, restaurants and grocery stores.

“Although management makes an attempt to oversee employees through an informal process, (auditors) found sanitarians are given a tremendous amount of autonomy,” the report said. “At a minimum, management should document staff’s working hours, routinely monitor and analyze performance data, verify entries into the system and establish one-on-one meetings with employees.”

“The supervising sanitarian is assigning and approving overtime without having any knowledge of the overtime budget,” the audit said. “The need to improve communication between the (health department’s) fiscal section and (the food safety program) is essential to maintaining strong fiscal operations.”

Young said he’s now keeping a running spreadsheet of all overtime use and sharing that information with an assistant health commissioner. Robinson said he’s confident the numbers will trend downward.

“There won’t be any arbitrary constraints on our ability to do the job,” Robinson said. “What we’ll look to manage is to make sure that the communication is appropriate and that any use of the overtime is appropriate.”

Tools for the job

Auditors also addressed technology problems, including a pair of databases that the city uses to process food licenses. They were created at different times and track different details. But they can’t be linked together.

“This results in the manual entry of approximately 2,000 food licenses each year,” auditors concluded.

Young said a 30-year veteran of the department has been managing the cumbersome system effectively, but a software upgrade could solve the problem later this year.

“We’re looking forward to the latest version of Permits Plus, which is called Accela,” he said. “The issue is we are prioritized behind other departments currently. So, we can’t wait. We feel positive that it’ll happen soon.”

Another technology problem is more basic: Department-issued laptops and printers are aging and cranky, causing some inspectors to hand-write their inspection reports or wait until they get back to the office so they can enter the data on their desktop computers.

“These practices create duplicate work for the sanitarians and hinder the food inspection process,” the audit said.

A question of bias?

One final critique from the audit involves the lack of a rotation policy for city inspectors. They’ve been assigned to the same census tracts for approximately five years. That “can facilitate a sense of undue familiarity” between the inspector and food-license holder “that may result in an ineffective inspection.”

Moore agrees that inspectors should rotate territories more often. She’d like to see rotations every two to three years, similar to a policy she managed in St. Louis before becoming Cincinnati’s 42nd health commissioner 10 months ago.

“It’s not an indictment on the skill or the quality of the inspection,” Moore said. “You put another eye in there. And that’s all about continuous quality improvement.”

Of the 16 recommendations contained in the April audit, Cincinnati’s health department only disagreed with one: Requiring inspectors to sign conflict of interest statements.

These forms “ensure management that sanitarians are conducting inspections in establishments where they do not have a personal, financial or self-interest that might impair their judgment,” the audit said. “These may include political ideological or social biases that could influence their inspections.”

Moore said she’s asked the city’s law department for advice on whether the food-safety program needs its own conflict-of-interest procedures, given that all city employees are already bound by local and state ethics rules. The department argued in its response to the audit that adopting the standard for food-safety employees could lead to city-wide rule changes.

“This requirement would reasonably be applied to all inspection staff across all city departments, such as Buildings, Fire, Liquor and Zoning,” the department wrote. It could also create “a potential conflict involving union employees.”