Are traffic speed cameras about public safety ... or money? 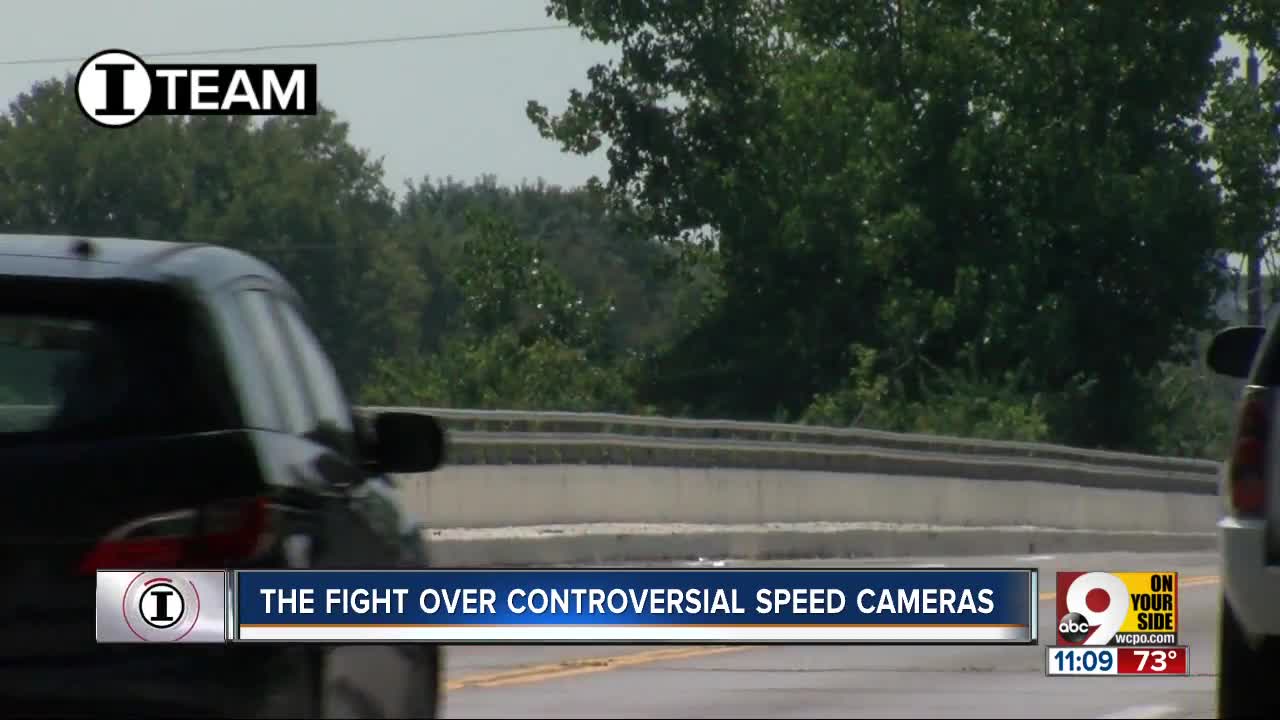 In Cincinnati, where traffic cameras are banned, community activists may ask voters to overturn the law next year. They think the cameras could reduce pedestrian deaths. People who oppose the move say they're a tool for police to wring extra money out of drivers. 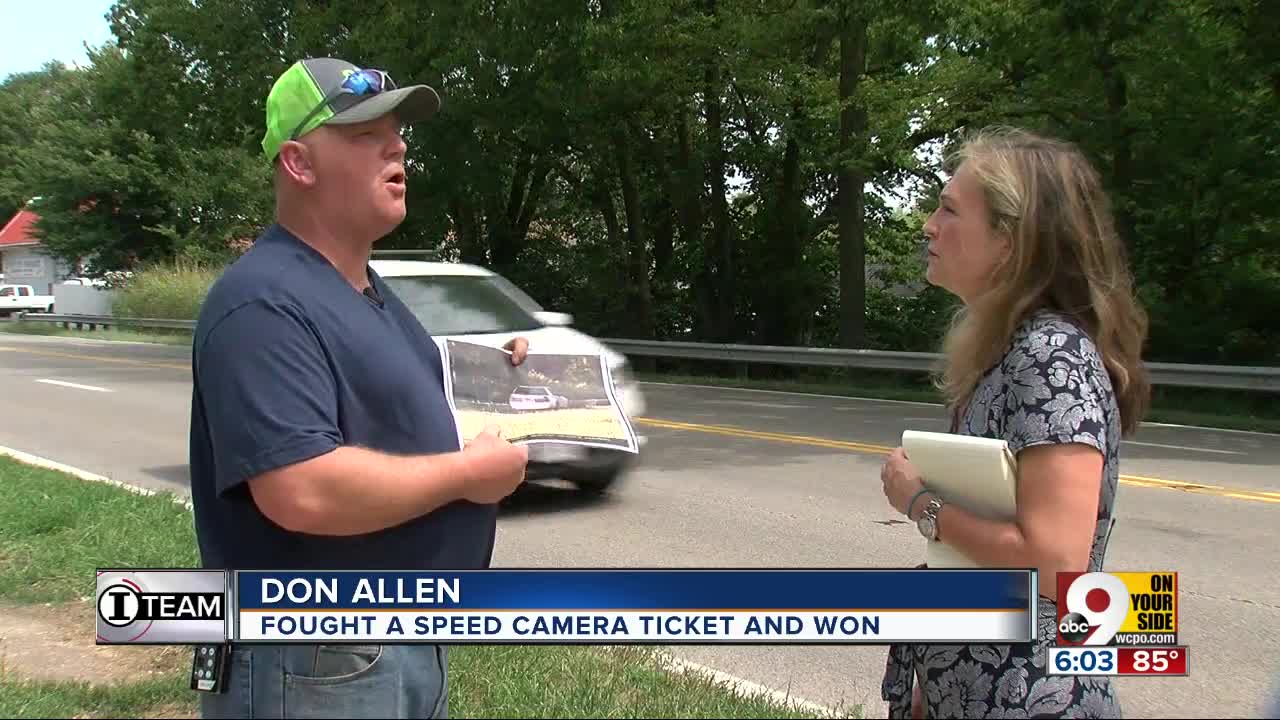 NEW MIAMI — Don Allen drove through New Miami for years on his way to work at a Hamilton brewery, never paying attention to the traffic enforcement cameras that have brought notoriety to this small village.

When a speeding ticket arrived in Allen’s mailbox in May, with a grainy photo of his car allegedly driving too fast on South Riverside Drive, he was immediately suspicious.

“The photo quality is what initially concerned me because it was just terrible," Allen said. "You could barely make out what kind of car I had."

Allen decided to investigate. He obtained the original photos of his car from the private company that generated the ticket.

Using speed limit signs as navigation points, he discovered that he was actually driving in a 55 mile-per-hour zone when he got ticketed for driving 47 miles per hour in a 35-mile-per-hour zone.

The citation was eventually dismissed. But Allen’s skepticism remains.

“I think this was about money,” Allen said. “This has nothing to do with public safety or traffic. This is about money.”

Traffic cameras have gotten a lot of attention since state lawmakers passed a new law in July to curb their use. So far six localities have sued to keep the cameras.

In Cincinnati, where traffic cameras are banned, community activists may ask voters to overturn the law next year. They think the cameras could reduce pedestrian deaths.

Controversy over traffic cameras in this Butler County village, which is known as a potential speed trap area, has gone on for years.

In July a Butler County judge ruled that New Miami owes $3.4 million to thousands of drivers ticketed by its old stand-alone speed cameras, which were found unconstitutional in 2014. The village has appealed that ruling.

“They were running what we think is essentially a scam where they were collecting money from people who didn’t live in the village at the behest of a for-profit company that had every incentive to get as many people ticketed and collect as much money as possible as fast as possible,” said attorney Josh Engel, who represents the drivers in that lawsuit.

Since then New Miami has switched its traffic enforcement program. Now officers use a handheld camera that looks like a radar gun.

The camera captures the vehicle’s license plate and measures speed. An officer pushes the button to take the photo and a private company issues the ticket.

But a new state law aims to limit the use of these cameras by stripping state funding to localities that use them.

Six municipalities, including New Miami, have already filed lawsuits challenging the legality of the new law, which took effect July 1.

In the meantime New Miami police have temporarily suspended their use of traffic cameras, awaiting a judge's decision.

That worries New Miami Mayor Bob Henley, who believes the cameras have made the village safer.

“People come flying into the village going 55 miles an hour,” Henley said. “If you are coming from Hamilton during rush hour, it lights up like a Christmas tree.”

Henley has spent his life in this village of roughly 2,200 where State Route 127 is a thoroughfare for traffic traveling from Hamilton to points north.

“I’ve personally seen four people die in a 100-yard stretch of that road -- all of them due to speed,” Henley said. “Since we’ve run those cameras up there, there’s been one accident that I can think of.”

If police are stationed at the village entrance then motorists usually slow down, said Police Chief Ross Gilbert.

“But if they don’t see us sitting out there, they speed up,” Gilbert said.

Yet Engel believes that money, not safety, is the true motivation for these cameras in New Miami.

“I am a hundred percent convinced this is not about safety,” Engel said. “This is about a village trying to raise revenue.”

Henley said it’s hard to tell how much money the village earns annually from the speeding fines, since it is deposited directly into the general fund.

On some weeks officers may generate 100 citations, and on others as few as 20. The company that issues the tickets keeps 35 percent of the $95 fine, or $33, while the village receives $62 per ticket.

“All of the money has gone to take the tax burden away from our village people,” Henley said. “A lot of services would be cut unless we did raise taxes, which we don’t want to do.”

Without the speed ticket revenue the village would likely disband its police department except for the chief, Henley said.

That’s one reason why New Miami leaders filed a lawsuit Aug. 27 challenging the new state law and asking a judge issue an injunction allowing them to continue using the cameras while he considers his decision.

Under the new law, localities must report how much they collect from traffic camera fines. That amount would be subtracted, dollar-for-dollar, from state local government funding -- essentially wiping out any profit.

Representative Bill Seitz, a Cincinnati Republican who sponsored the law, calls traffic cameras “a scam,” and “policing for profit.”

Seitz was the architect behind a 2015 law that required cities using traffic cameras to station a full-time police officer with each camera, conduct a three-year traffic study and give speeders leeway before issuing tickets.

Dayton challenged that law, which was ultimately declared unconstitutional by the Ohio Supreme Court in 2017 because it conflicted with cities’ home rule powers.

Seitz also expects this newest traffic camera law to ultimately be decided by the Ohio Supreme Court in a year or two.

“I think the public is definitely on my side of this question,” Seitz said. “I get letters all the time from people all over state describing abuses from these cameras.”

Red light cameras and speed cameras have been used in Dayton since 2002, where officials say they have seen a dramatic improvement in safety.

“It changes driver behavior when they know a camera is there,” said Dayton city solicitor John Musto. “They don’t run red lights as often, they don’t speed as often.”

Musto filed a lawsuit challenging the newest state law in July. A judge granted Dayton an injunction allowing the city to continue using traffic cameras while the case moves through the court system.

Injunctions have also been issued in Toledo and Akron, allowing the cities to continue using the cameras.

The city charter in Cincinnati currently bans the use of traffic cameras, but some city leaders want to change that.

In July the city put out a request for informational packets from contractors on officer-held speed enforcement cameras.

"There’s physically not enough manpower to cover all of these streets,” Isaac wrote.

Before cameras could be used in Cincinnati, voters must approve a charter amendment to make it legal.

Already hundreds of parents, teachers and law enforcement officers have met to discuss traffic safety cameras and what must be done in order to get the issue on the ballot in November 2020.

“It will really be up to them whether or not it is something to put before the voters next year,” Landsman said.

If Cincinnati voters did authorize the use of traffic cameras, they would only be used around major thoroughfares and school zones and not as “speed traps,” or as a tool to raise revenue, Landsman said.

And the traffic cameras would come at no cost to taxpayers. Private companies pay for the equipment and for the overtime pay for officers to run the cameras outside of their normal work schedules, Landsman said.

“The goal is not to raise money,” Landsman said. “The goal is to get people in certain areas of the city to slow down to 20 to 25 mph because we know kids are crossing hundreds of streets every morning, every afternoon.”

“It’s these little towns that have given this whole thing this terrible wrap,” Landsman said.