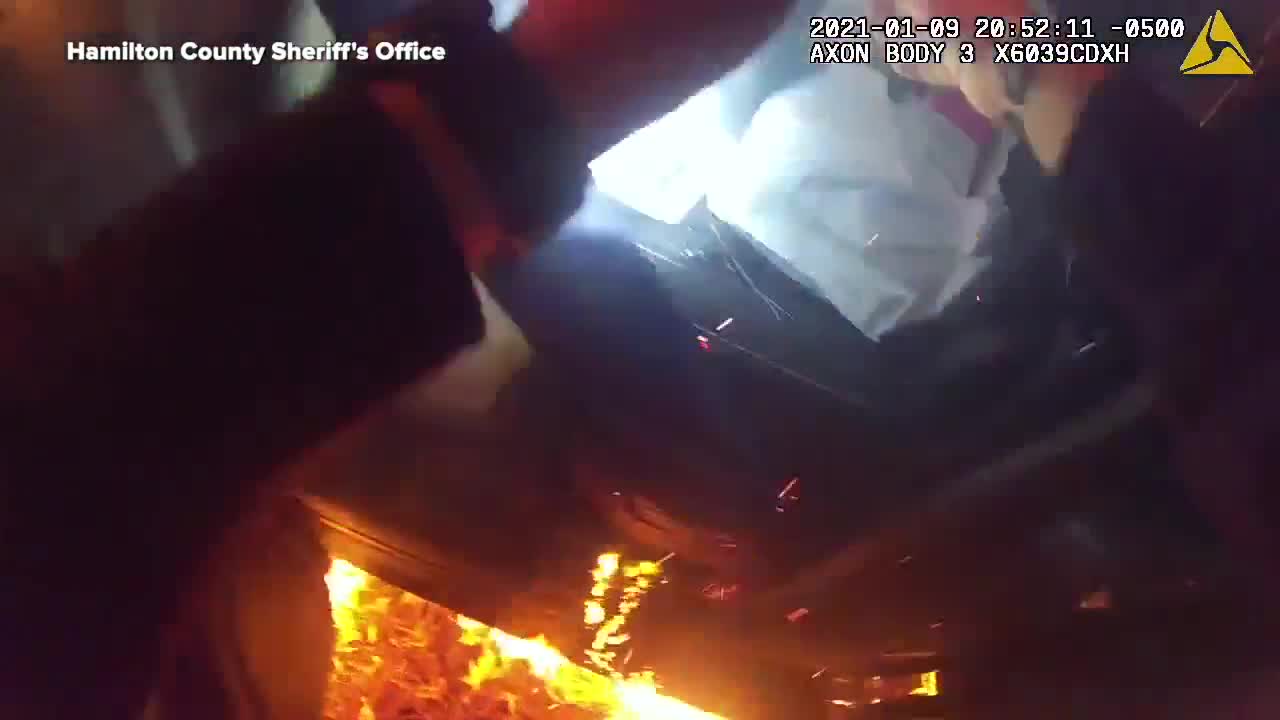 Body cam video shows a Hamilton County Sheriff's deputy, a Montgomery Police officer and a good Samaritan rescuing a woman who was unconscious inside a burning car that crashed in a wooded area along Fields Ertel Road. 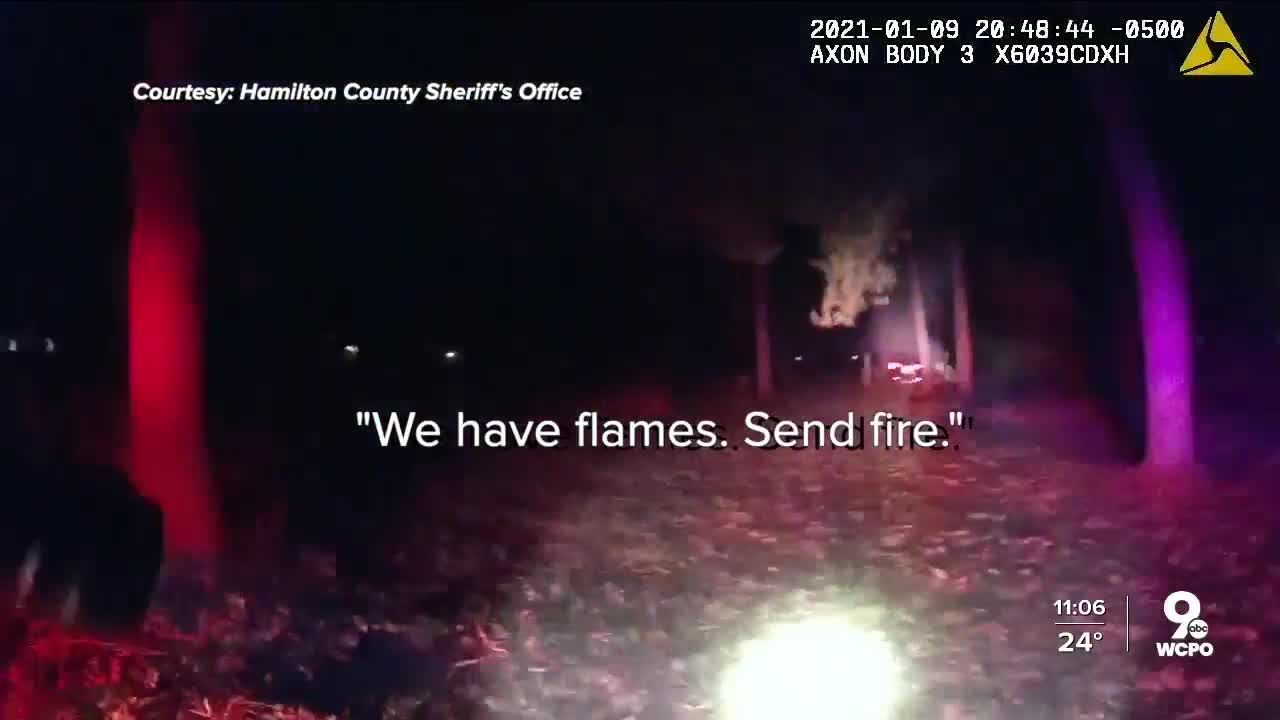 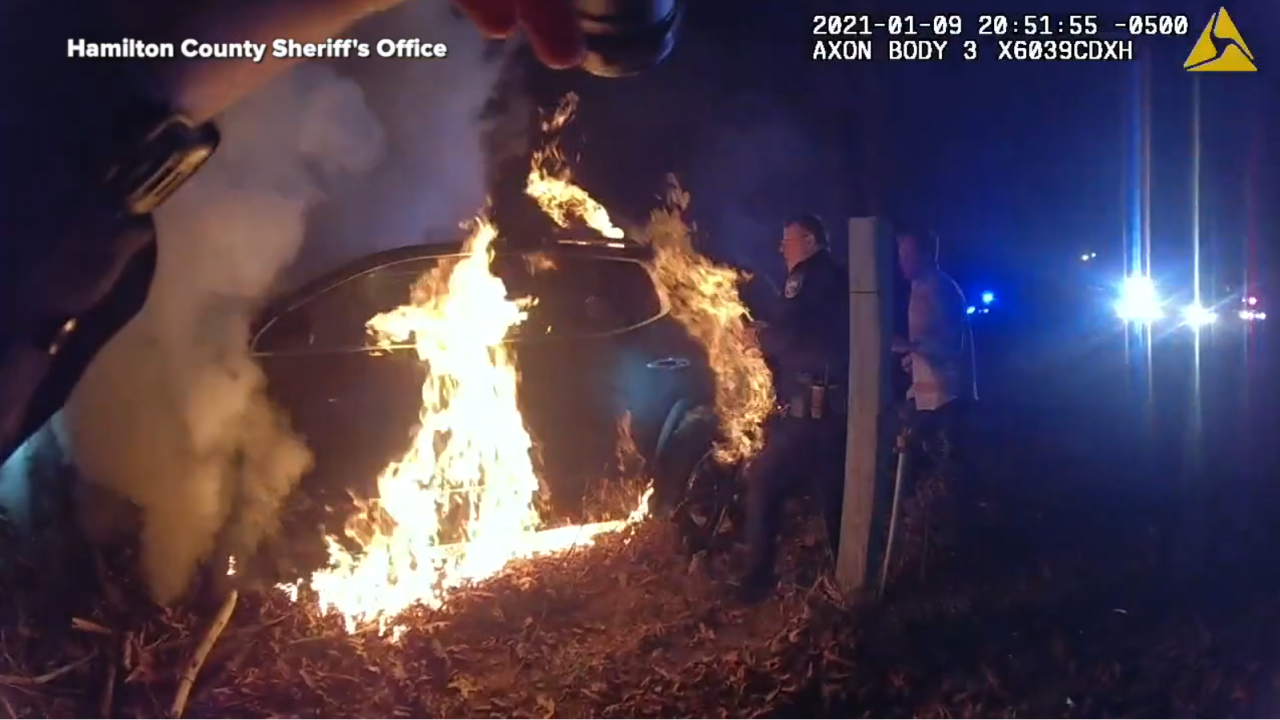 SYCAMORE TOWNSHIP, Ohio — A Hamilton County Sheriff's deputy was checking on what he thought was an abandoned vehicle in a wooded area Saturday night, but his quick action might have saved a woman’s life.

Newly-released body camera footage shows the life-saving efforts of the deputy, who discovered the woman passed out and having a medical emergency behind the wheel of her burning car.

Just before 9 p.m., the deputy radioed for help in a wooded area behind Pathways Church on Fields Ertel Road.

"She's passed out. Foot on the gas. I'm going to try to do a lock-out,” the deputy said, documented on the newly released body cam footage.

The deputy ran back to his car to call for firefighters to their location.

"We have flames. Send fire,” he told dispatchers.

With the woman's foot stuck on the gas pedal, the deputy did everything he could to get in, trying to break the driver’s window with his flashlight. But the door was locked, and the window wouldn’t shatter.

Three minutes after the initial call, more help arrived: Montgomery Police officer Rich Riley, who had helped the driver fix a flat tire down the road 90 minutes prior, arrived to assist at this scene.

With a shot fired into the lock, the door opened as the flames grew more intense. That’s when a good Samaritan jumped into the backseat to help.

"Hold on. Let me grab her arm. Get the seatbelt off," the man said.

The Montgomery officer pulled the woman out and they carried her away. Officers, watching as the car became fully engulfed in flames just 31 seconds after the woman had been rescued, shared their gratitude with the good Samaritan.

"Thank God you were working! Man, it went quick. As soon as that door went open the flames just went crazy!" one of the men said.

The woman suffered burns but was alert when she was taken to the hospital. The three men put their lives on the line in order to save another.

The Montgomery Police officer was treated at the scene for a burn on his wrist.

Officer Riley initiated an all-county broadcast for a missing motorist, and then he and other officers searched the area. He suffered burns on his hand after the rescue. He's back at home recovering.

Body cam footage showing their actions -- on @WCPO at 11. pic.twitter.com/ySTIN2uwfO