WCPO files complaint over rules for media during Tensing retrial 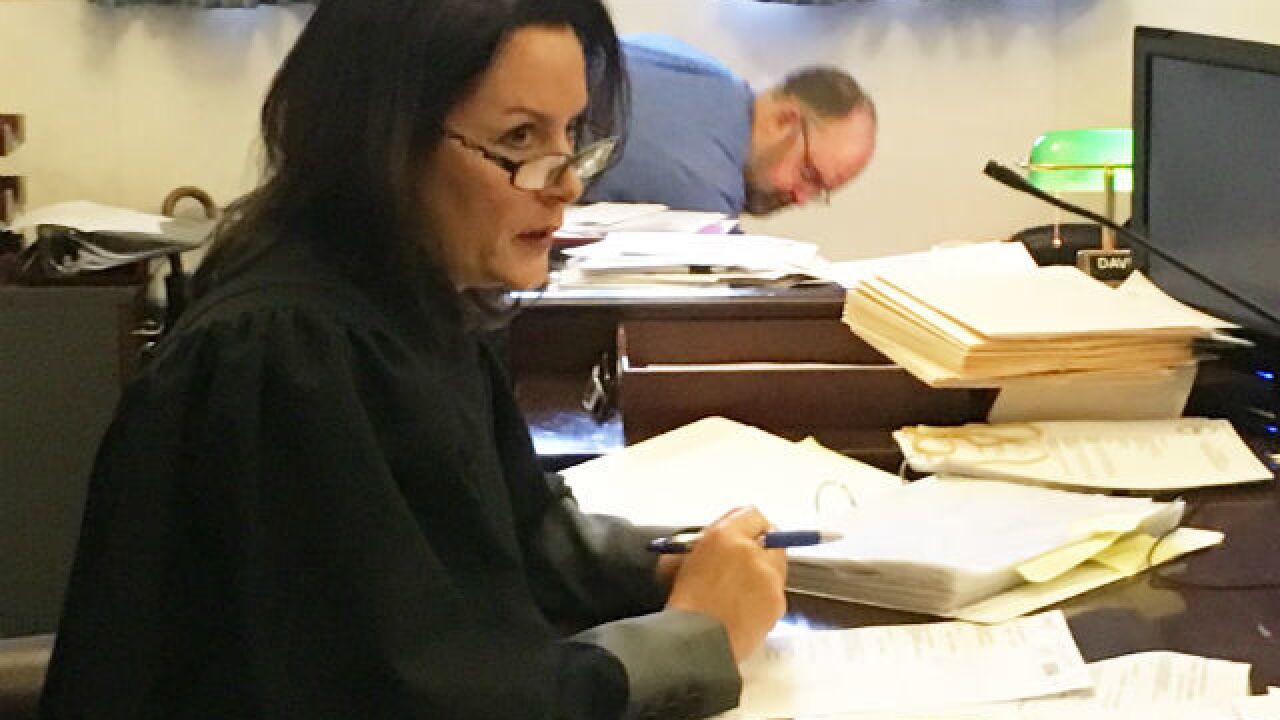 Copyright 2017 Scripps Media, Inc. All rights reserved. This material may not be published, broadcast, rewritten, or redistributed.
<p>Judge Leslie Ghiz holds a hearing in the Ray Tensing retrial on Jan. 23, 2017.</p>

CINCINNATI -- Moves by a Hamilton County judge to limit media access during Ray Tensing's retrial are unconstitutional, according to a complaint WCPO filed Monday with Ohio's First District Court of Appeals.

At stake is the public's right to know what happens during one of the most closely scrutinized cases in recent memory, the television station alleged.

Tensing, a former University of Cincinnati police officer, is charged with murder and voluntary manslaughter for fatally shooting black motorist Samuel DuBose during a traffic stop July 19, 2015. Tensing has claimed his use of force was justified, saying DuBose tried to drive off from a traffic stop and left him in fear for his life.

She told media outlets last week they needed to sign a "waiver" agreeing they wouldn't show jurors or witnesses or victims who had a problem with being recorded.

Without the waiver, Ghiz said WCPO would be banned from airing and recording what happens in her courtroom. That would be true even if another TV station is operating the sole video camera allowed inside. Broadcast and online media outlets sometimes share a single video camera, called a "pool camera," to avoid overcrowding where space is limited.

Ghiz also is barring electronic devices such as smartphones, laptops and tablets from the courtroom and entire fifth floor of the Hamilton County Courthouse during the trial.

The restrictions run afoul of rules established by the Ohio Supreme Court, as well as rulings at the state and federal level, according to WCPO's complaint. For example, a witness or victim can object to being recorded -- but, according to the complaint, a judge must hold a hearing to decide if that person has a valid reason before restricting the media.

Access is crucial because media act as the public's eyes and ears in the courtroom, WCPO news director Chip Mahaney said. Restrictions, he argued, limit the public's right to scrutinize what happens.

"Trials are part of our government. Our government operates in the open, and the trial of a man accused of a serious crime that has enormous community interest needs to be conducted in public," Mahaney said.

Ghiz's rules also would limit media access to jury selection, the complaint says, as well as to juror questionnaires. Those questionnaires became a point of contention in November: Jurors reacted negatively when Judge Megan Shanahan, who presided over the first trial, ordered the documents released at the request of the Cincinnati Enquirer and WCPO. Seven to eight jurors told Shanahan's bailiff that they "fear for their well-being" if their identities become known, according to a court entry. WCPO's complaint filed Monday alleges the entry was hearsay.

Ghiz told media the restrictions were part of her efforts to keep the trial in Hamilton County. That's the wrong choice, WCPO's complaint says: The Ohio Supreme Court has previously found a trial should be moved before restricting media access.

"I understand the judge certainly wants a fair trial," Mahaney said. "I understand the judge wants this trial to start and finish in an orderly fashion and wants to do what she can to put guardrails to get the trial completed in a legal fashion. But, at the same, you know, there are laws that govern trials, and we see the laws from a different point of view."

Defense attorneys and prosecutors have been banned from talking with media about the case since December, when Ghiz handed down a gag order.

The Cincinnati Enquirer, Associated Press, WXIX-TV, WLWT-TV and WKRC-TV have a separate court complaint about the same issues. Chris Schaefer, the assistant county prosecutor representing Ghiz, filed to consolidate the cases and have them dismissed, saying the judge has authority to control media access in her courtroom.

Ghiz recently had a jury subjected to tampering, according to the motion, when someone who knew the defendant used Facebook to locate a juror.

Electronic devices are barred from the fifth floor so no one can take photos or video of witnesses and jurors, the motion says.

There's also only so much room in court, Schaefer wrote, with 30 spaces are taken up by people necessary to the case -- jurors, alternates, the judge, courtroom personnel, defense and prosecution teams, and security. Ghiz is trying to reserve another eight for Tensing's and DuBose's family members, the motion says, leaving 12 spaces available.

Seven would be open to the general public, the motion says, while five would be reserved for media.