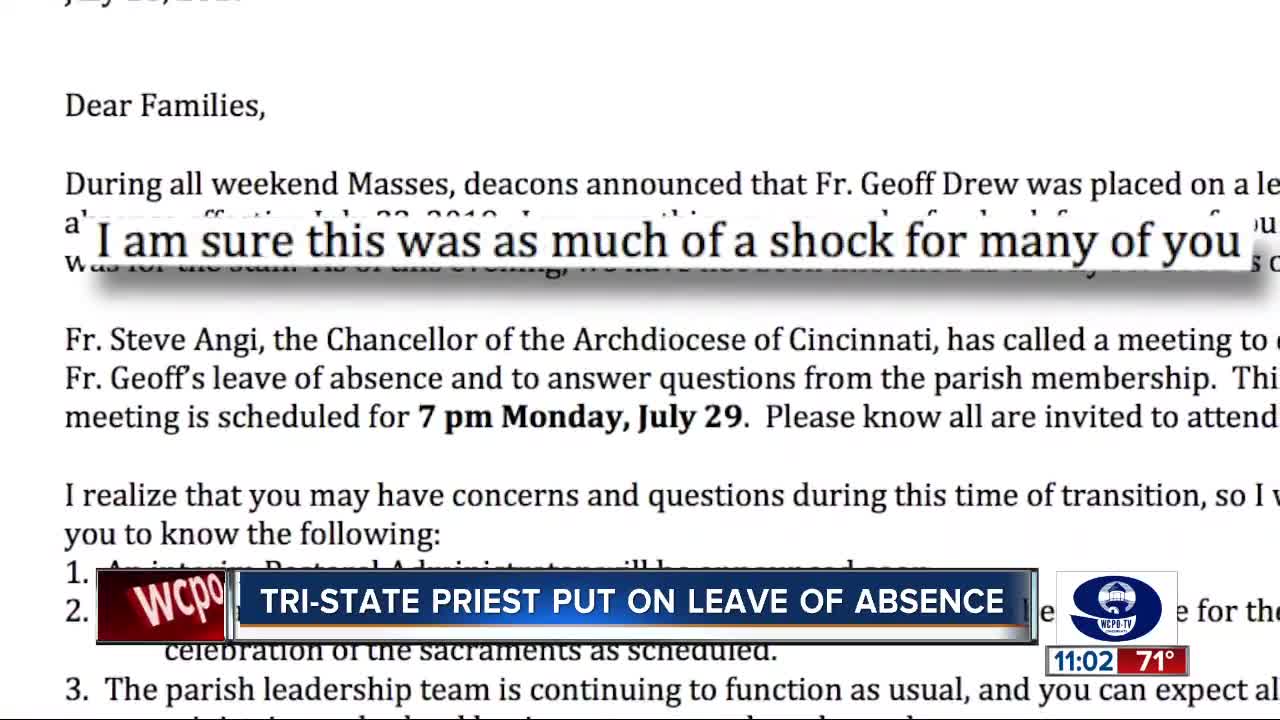 There is no evidence the Rev. Geoff Drew is guilty of criminal wrongdoing, according to Hamilton County Prosecutor Joe Deters. But some parishioners who attended a Monday night meeting meant to address the St. Ignatius priest’s suspension left uneasy.

GREEN TOWNSHIP, Ohio — There is no evidence the Rev. Geoff Drew is guilty of criminal wrongdoing, according to Hamilton County Prosecutor Joe Deters. But some parishioners who attended a crowded Monday night meeting meant to address the St. Ignatius priest’s suspension left uneasy.

They said they still did not know exactly what Drew had been accused of doing.

“They gave us very little details,” said Mike Hausfeld, whose son attends eighth grade at St. Ignatius of Loyola School. “The questions we asked, it was shoved off, pushed off to the side, turned into another, ‘That’s not our decision. We can’t make that decision. It’s not our call.’”

Reporters were not allowed inside the meeting. According to Hausfeld, Archdiocese of Cincinnati leaders disclosed only that the allegations against Drew involved inappropriate texts exchanged with a male student at the school.

That explanation matched the archdiocese's official statement to press earlier in the day: That Drew had been accused of behavior "contrary to the (archdiocese) Decree On Child Protection."

Archdiocese officials at the meeting also said Drew had been under monitoring after “some concerns” surfaced during his time in Liberty Township's St. Maximilian Kolbe parish, according to Hausfeld. They did not share whether those concerns had been related to his relocation to St. Ignatius.

They also did not share what would happen to Drew when his suspension and the accompanying investigation were finished. Hausfeld said they promised they were “making changes” but didn’t specify.

“I’m extremely concerned with the way they handled it tonight,” he said. “There was no answer.”

Ron Bonhaus, a 30-year member of St. Ignatius parish, said he first learned of the situation via a short announcement at Mass Sunday morning. The priest who made the announcement didn’t hint at anything scandalous or use the word suspension — instead, according to Bonhaus, he said Drew was taking a leave of absence.

“We went on, finished Mass, prayed and everyone went home,” he said.

Hearing the situation could potentially be far more serious was disturbing, he added.

“I’ve known him since he’s been here less than a year,” he said of Drew. “He’s always been very friendly, very outgoing, just a pillar in the community in my opinion. From what little I know him, he was an outstanding guy. It comes to a shock to all of us.”

Bonhaus was less frustrated with the archdiocese’s reticence than Hausfeld. He credited officials with making an effort to be proactive by addressing the situation in Monday night’s meeting.

He declined to comment on the allegations of inappropriate texting.

Even Kevin Vance, principal of St. Ignatius of Loyola School, said he had not received the full story from the archdiocese before the meeting.

“I am sure this was as much of a shock for you as it was for the staff,” he wrote in a Sunday letter to parents. “As of this evening, we have not been informed as to why Fr. Geoff is on leave.”

Correction: An earlier version of this story incorrectly identified one of the parishioners interviewed for this story.