Being deaf hasn't stopped this Loveland boy from hearing, talking and playing the piano 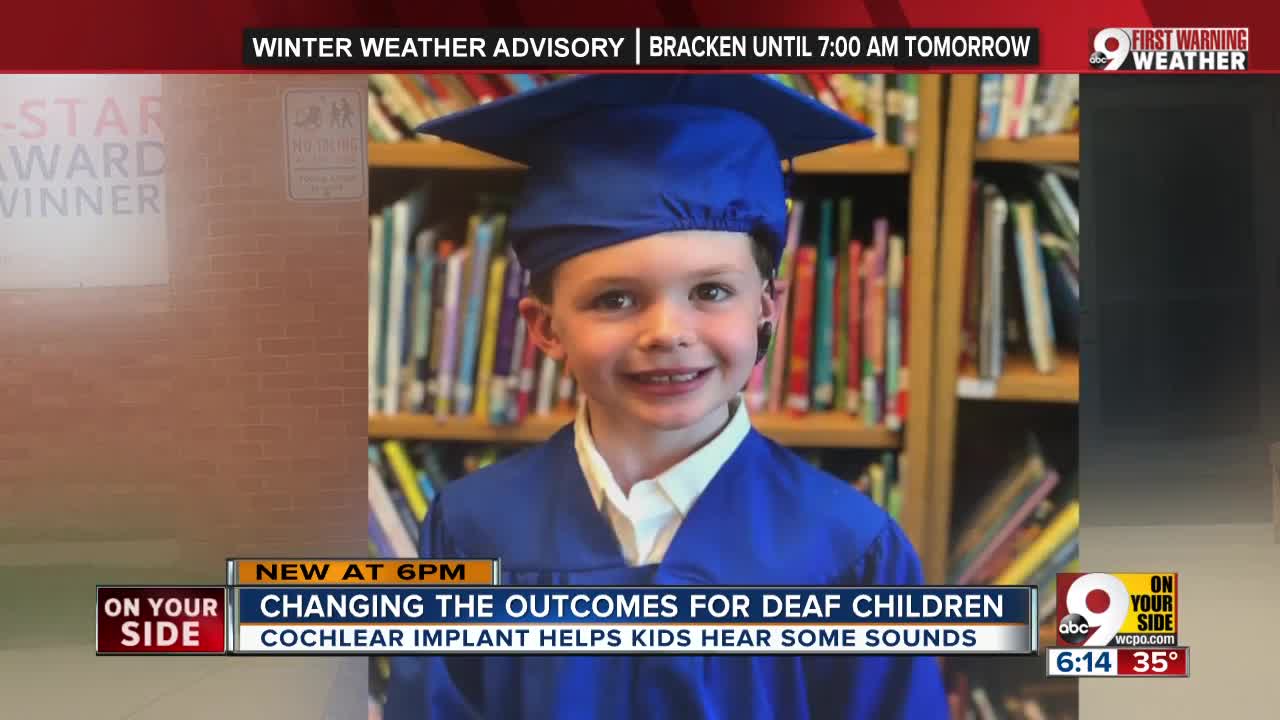 The Westermans said they were lucky to learn about Ohio Valley Voices, an early intervention program, early in Jack’s life. The not-for-profit organization, based in Loveland, teaches children with hearing loss to listen and talk using hearing aids and cochlear implants.

LOVELAND, Ohio — When Libby Westerman watches her son Jack play the piano she can’t help but think of the silence that revolved around her parents’ lives — and much of her childhood.

“I grew up in a deaf household. I had deaf parents,” she said.

As children, Westerman’s parents were sent to a school for the deaf, hours away from their families to learn sign language.

“When they came home during Christmas and summer as they grew older, there was no communication within the families,” she said of her parents’ experiences growing up deaf. “There were no friends that they could make within their neighborhood.”

Fast forward to the birth of her own son Jack, now 7 years old. Jack plays the piano, attends a public school, plays with his sister and drives his parents crazy playing the drums. Like his grandparents, Jack is deaf, but his experience growing up with hearing loss is significantly different.

“I don’t want his deafness to be a barrier in what he wants to do when he grows up,” Libby Westerman said.

The Westermans, who believed their son would attend a traditional school for the deaf, stumbled upon Ohio Valley Voices while doing research online when Jack was still an infant. Libby and her husband Jon took a tour of the school and left in amazement.

The Westermans said they were lucky to learn about Ohio Valley Voices, an early intervention program, early in Jack’s life. The not-for-profit organization, based in Loveland, teaches children with hearing loss to listen and talk using hearing aids and cochlear implants.

“We change the outcomes for these children,” said Maria Sentelik, executive director of Ohio Valley Voices. “The average deaf adult who uses sign language can’t read beyond the fourth grade level. They have a higher incidence of depression, suicide, drug use.”

Sentelik said the program works with Cincinnati Children’s Hospital Medical Center to connect children with new cochlear implants that allow them to access some sound. Think of a piano keyboard with 88 keys — a person with no hearing loss has access to all 88 keys in their brain. The cochlear implants can give a deaf child seven keys to decipher sounds.

“So what we do is — we really train the child how to interpret those seven keys,” Sentelik said. “It’s not really our ears that hear- it’s our brain. And so we’re training the child’s brain to understand speech through only using seven keys.”

More than 155 children have graduated from Ohio Valley Voices. Of those graduates who are now adults, 88 percent are attending college or higher education.

Jack wants to be a teacher.

As the Westermans learned, Sentelik said it’s critically important for children to come to Ohio Valley Voices early because of how the brain develops at a young age.

“Our statistics say that 80 percent of our children that come before the age of 3 can talk within normal limits, talk just like you by the time they graduate from Ohio Valley Voices,” she explained. “That number drops down to 43 percent after the age of 3.”

It’s also critically important for families to know that Ohio Valley Voices relies on scholarships with one-third of its population living in poverty.

“We believe strongly that every child deserves the right to talk regardless of income,” Sentelik said.

Jack’s mom Libby Westerman calls her family’s experience with Ohio Valley Voices “unbelievable.” She said she wishes this had been available to her parents.

“I just want Jack to lead a life where there’s endless possibilities and that he’s able to have access to anything he wants and to live the best life he can,” she said.

Anyone with interest in supporting Ohio Valley Voices and its mission is invited to purchase tickets to the Ohio Valley Voices 2019 Gala taking place Feb. 23 at The Phoenix on Race Street in Cincinnati, or contribute a donation by clicking here.