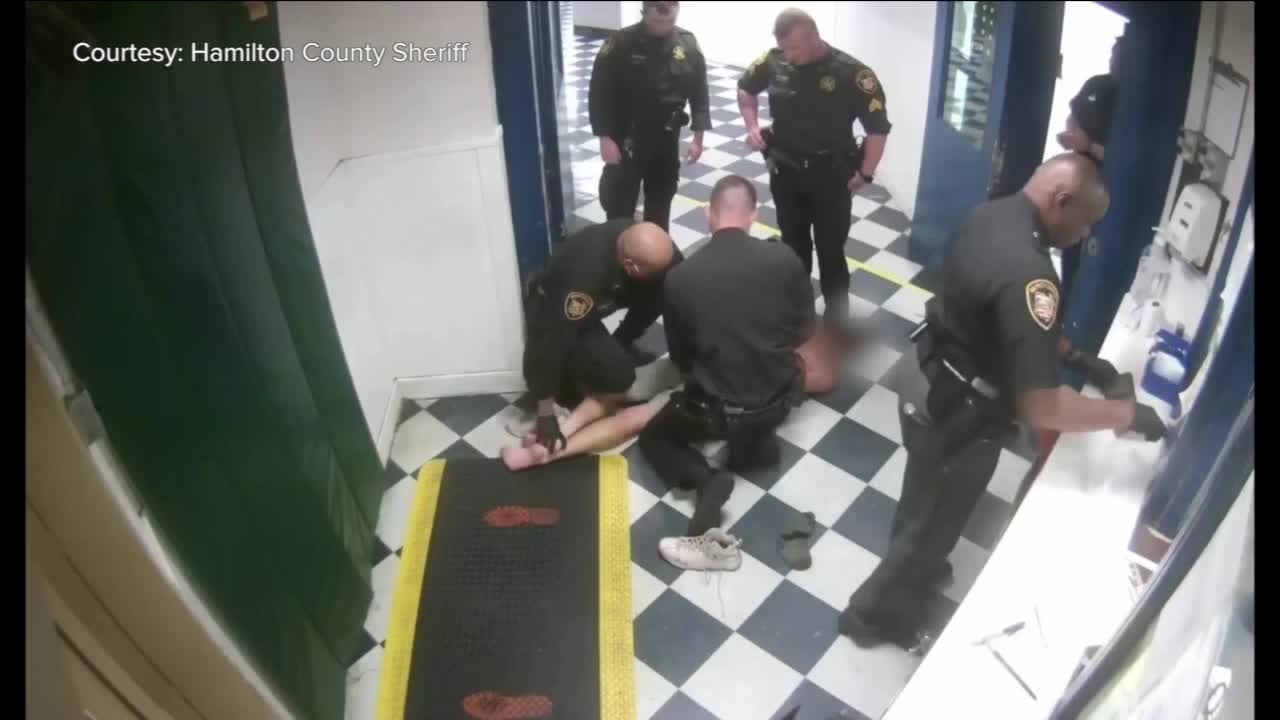 A Hamilton County deputy who kicked an inmate in the head has been arrested and charged with misdemeanor assault, Hamilton County Prosecutor Joe Deters announced Thursday afternoon.

CINCINNATI — A Hamilton County deputy who kicked an inmate in the head has been arrested and charged with misdemeanor assault, Hamilton County Prosecutor Joe Deters announced Thursday afternoon.

According to a news release from Deters’ office, Sgt. Jesse Franklin had been processing an intoxicated inmate at the Hamilton County Justice Center on June 9 when the inmate became combative. He bit Franklin’s work-booted foot, Deters wrote; Franklin kicked him in the head, resulting in a hospitalization where the inmate received five stitches.

"As sheriff of Hamilton County, I am outraged and shocked by the egregious conduct," he said. "These actions are inconsistent with our training and will not be tolerated under my watch."

Video of the incident shows deputies wrestling the inmate to the floor after he resists their attempts to search him. While he is restrained on his stomach with his arms cuffed behind his back, he bites the top of Franklin's boot. Franklin kicks him hard enough to lift his torso off the ground.

He lands on his chest several feet away.

The man had been arrested for disorderly conduct while intoxicated and obstructing official business. According to Hamilton County court documents, he had kicked his neighbor's truck and attempted to flee from police when they arrived to arrest him.

Neil said he had suspended Franklin's police powers as soon as he learned about the incident, although he did not provide a specific date. In light of his arrest, Franklin will be suspended without pay and disciplined. Neil did not clarify what the disciplinary process might involve.

"I will not comment specifically on the investigation at this time," he said. "I do not want to jeopardize the integrity of this process and risk the discipline of this employee being overturned."

Deters wrote that the inmate’s injury did not qualify as “serious physical harm,” which would have potentially elevated Franklin's charge beyond a misdemeanor.

“Not everyone has the temperament to be a police officer,” Deters wrote, adding later: “Maintaining a professional, 21st century police force is expensive to society, but pays for itself many times over.

“Actions like this are a harsh reminder that resources must be dedicated to recruiting the right kind of officers and ensuring that they have the proper equipment, knowledge, training and temperament to do the job that citizens want and expect.”

If convicted, Franklin could spend up to six months in jail.