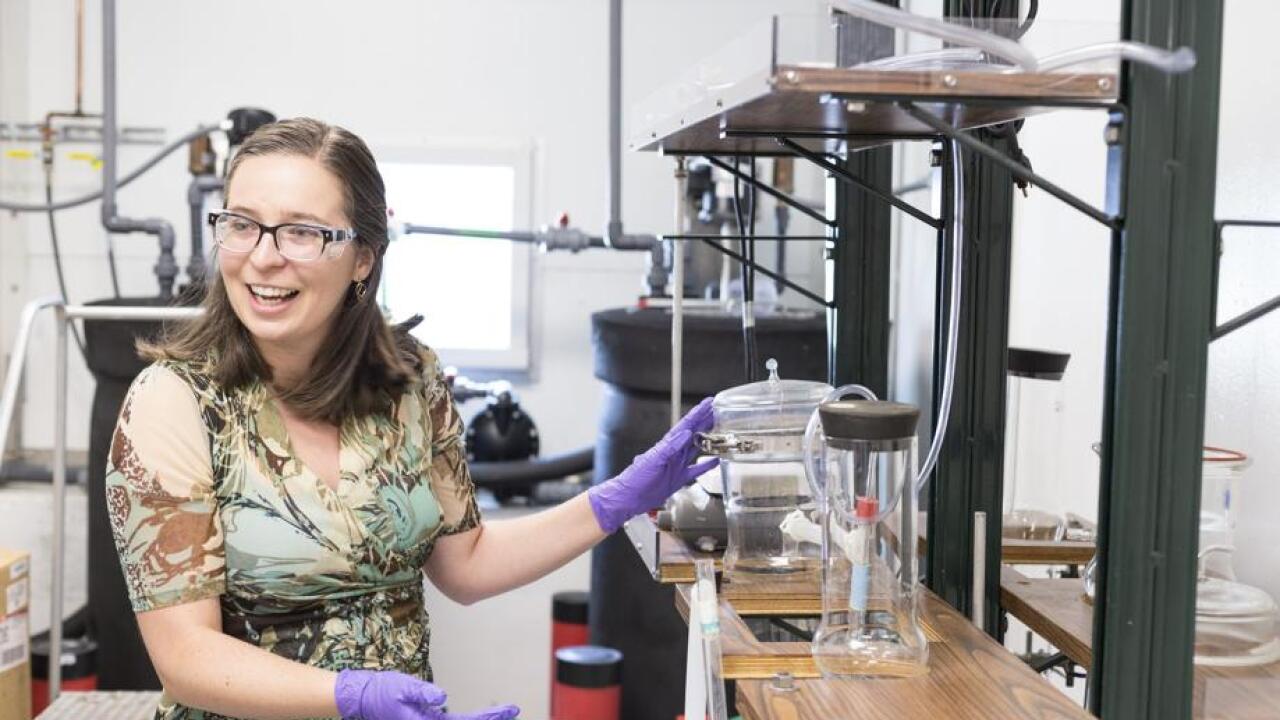 Jennifer Menzies, pictured in 2018 at her lab in Mason, is a P&amp;G scientist that is part of a team that tests and assesses how activated sludge water at wastewater treatment plants reacts and interacts with chemicals and ingredients that may be included in P&amp;G products. P&amp;G has worked with Fairfield’s wastewater treatment plant for around 25 years. IMAGE PROVIDED

FAIRFIELD, Ohio — Fairfield and Procter & Gamble’s generation-old alliance to protect water and the environment has improved the products many use every day, officials said.

“We all need to do our part for the environment,” said Jason Hunold, Fairfield Public Utilities treatment superintendent. “We’re environmentalists. We’re preventing water pollution, we’re protecting water quality. Everybody has to do their fair share when it comes to protecting the environment.”

About 25 years ago, according to the Journal-News, the city and the American consumer goods giant teamed to help P&G scientists run tests on chemicals and ingredients to see how they react to the activated sludge in a wastewater treatment process. Because the products that are flushed or poured down drains end up at a plant similar to Fairfield’s on Groh Lane, and a large amount of detergents, soaps or other surfactants could kill or harm what Hunold describes as “one gigantic biological animal.”

“It’s all biology out there. If we get hit with a slug load of a surfactant, it can negatively impact our treatment process because we have bacteria, microorganisms, protozoa, and we’re utilizing these organisms to breakdown soluble organic matter that’s in wastewater,” he said. “If we get hit with a big slug load of anti-bacterial soap, a surfactant, it can actually wipe out that bacteria I have here.”

Jennifer Menzies, a P&G scientist part of the company’s Global Product Stewardship, collects buckets of the activated sludge from Fairfield’s tanks and takes the liquid to her team at the research and development facility in Mason. Her team conducted tests and assessments on more than 100 chemicals and ingredients last year.

“One of my specific tasks is to evaluate ingredients that we would want to put into products for environmental safety, specifically bio-degradation,” Menzies said.

She said the tests she and her team conduct “require a certain amount of realism,” which is where the microbes from an activated sludge wastewater treatment plant come into play.

Menzies collects buckets of the activated sludge water is collected from multiple sources, but primarily Fairfield, Menzies said, “because they’re a great example” of a well-operated activated sludge treatment plant that receives predominately domestic wastewater, which is where a lot of P&G’s products end up after washing dishes, doing laundry and washing their bodies.

“P&G as a whole is committed to the environmental safety of our products, so we routinely do safety evaluations for any ingredient that we’re developing,” Menzies said.

Procter & Gamble had spent more than the 60 years focused on the future and environmental sustainability, starting in 1956 when it created the first environmental safety publication measuring surfactants in rivers.

“Early on, we realized as a big company that makes products that are distributed very broadly and well-received, we knew those products were going to be entering the wastewater stream so we needed to be responsible on this,” said Tracey Long, a P&G spokeswoman. “We were working towards sustainability before sustainability was hip.”

Over the decades, the company established its Environmental Water Quality Laboratory, formed its Corporate Environmental Safety Department, and co-founded the Society of Environmental Toxicology and Chemistry. In recent years, the company announced goals to reduce absolute greenhouse gas emissions, environmental sustainability goals as part of the P&G Ambition 2030, and the formation of the Alliance to End Plastic Waste, an organization to help eliminate plastic waste.

It was in the 1970s when P&G leaders felt they needed to invest in sustainability resources, Long said, saying it is the company’s responsibility that their products not harm the environment.

“As a company, our goal is always to provide products, superior value and quality that people love, that take care and provide benefits that they need. But in doing that we know we need to make sure we provide products that … are really helping to make the world a better place,” Long said.

1977: Co-founded the Society of Environmental Toxicoloigy and Chemistry

2015: Announced goal to reduce absolute greenhouse gas emissions by 30 percent by 2020, and partnered on two renewable energy projects in Georgia and Texas