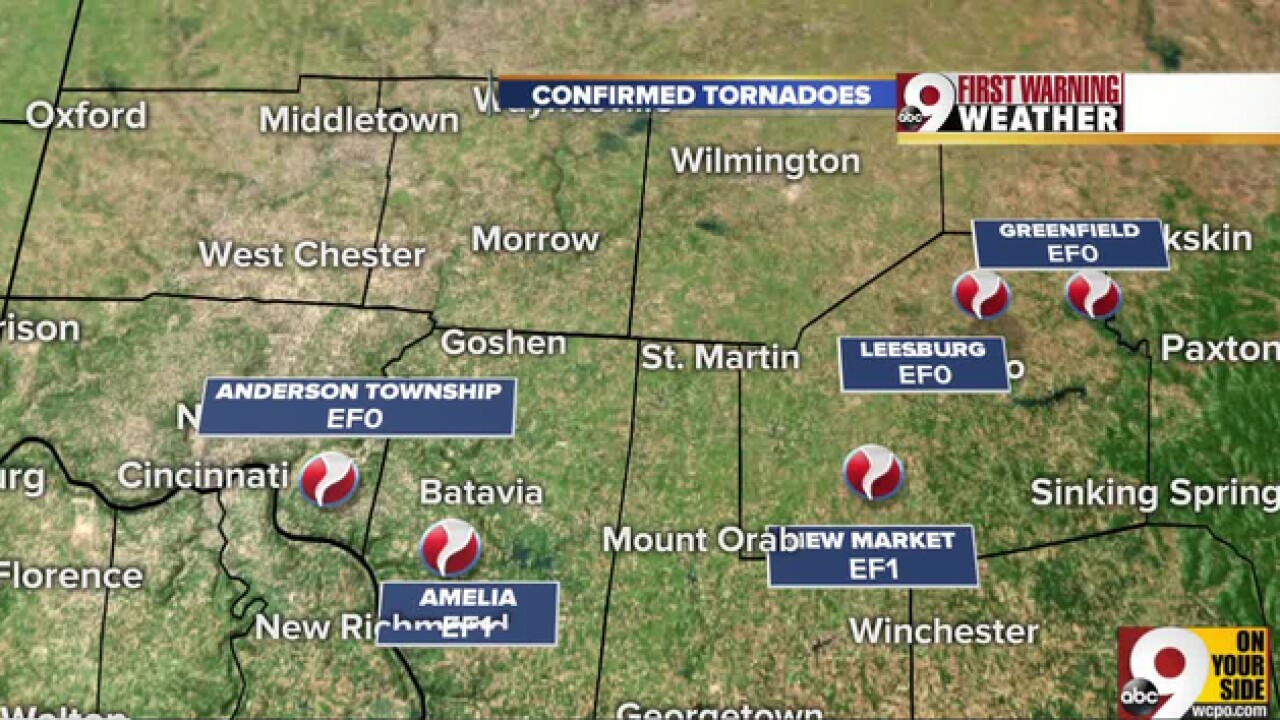 Copyright 2017 Scripps Media, Inc. All rights reserved. This material may not be published, broadcast, rewritten, or redistributed.
WCPO 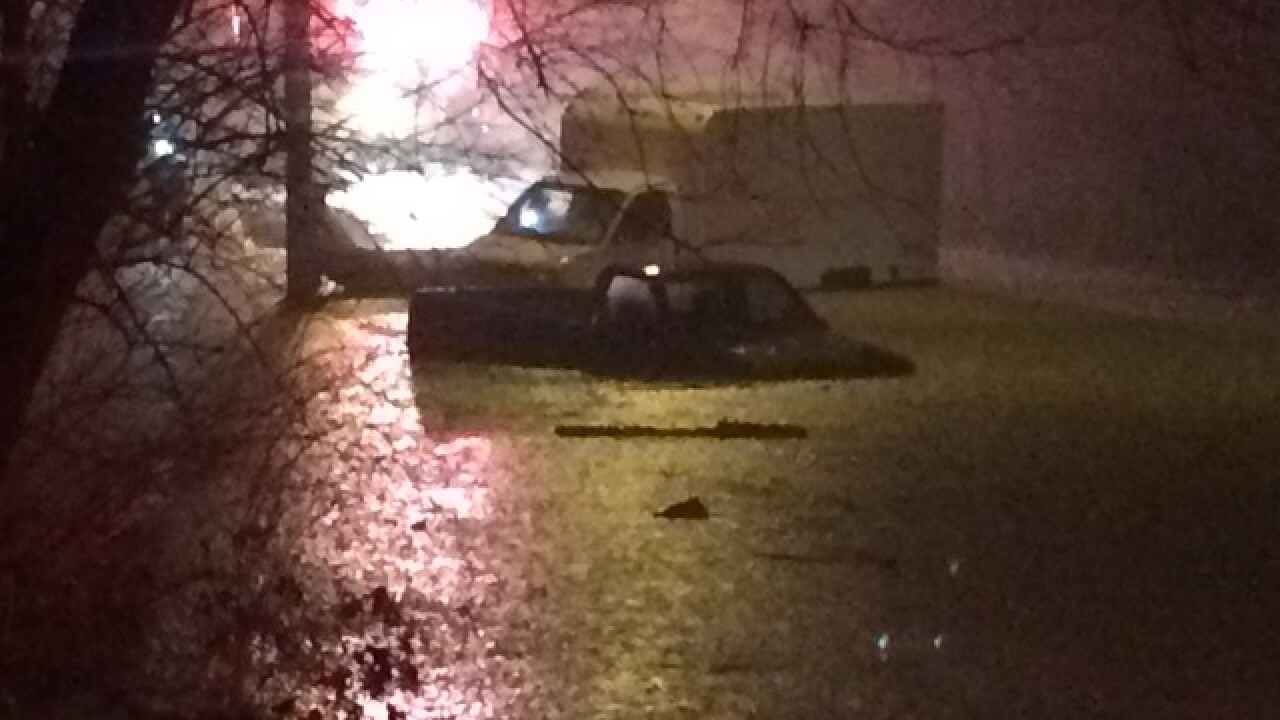 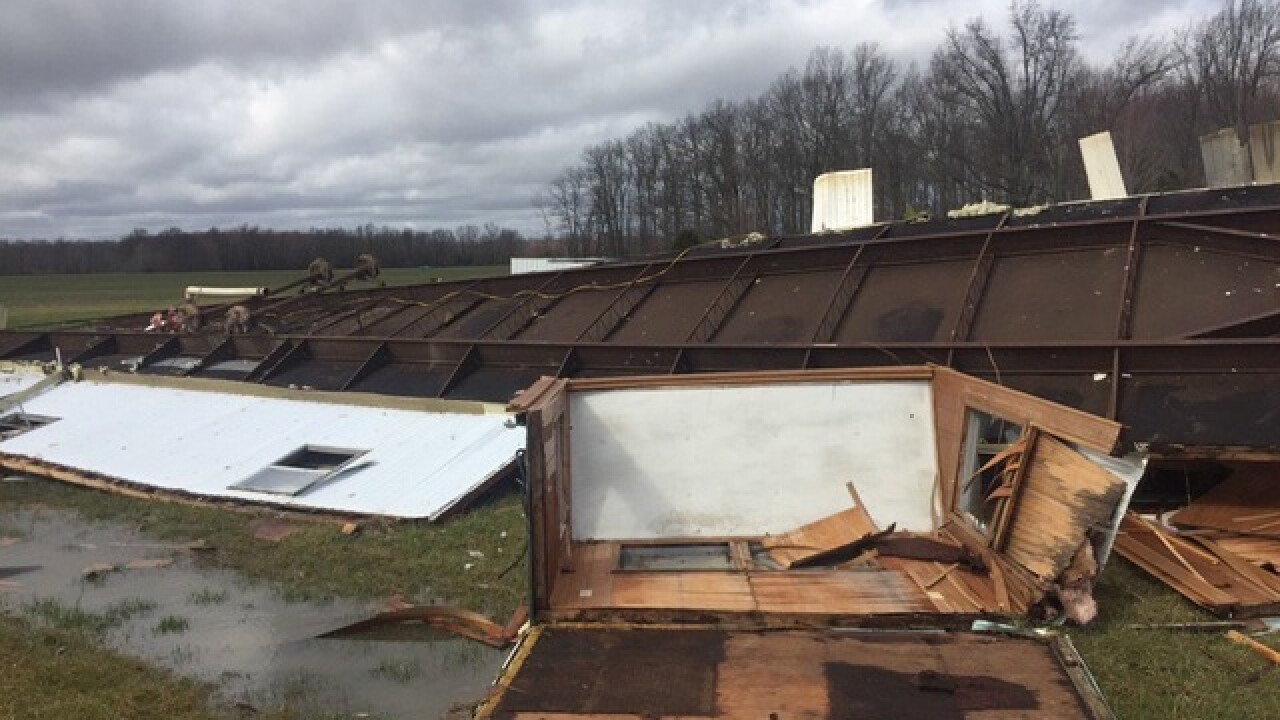 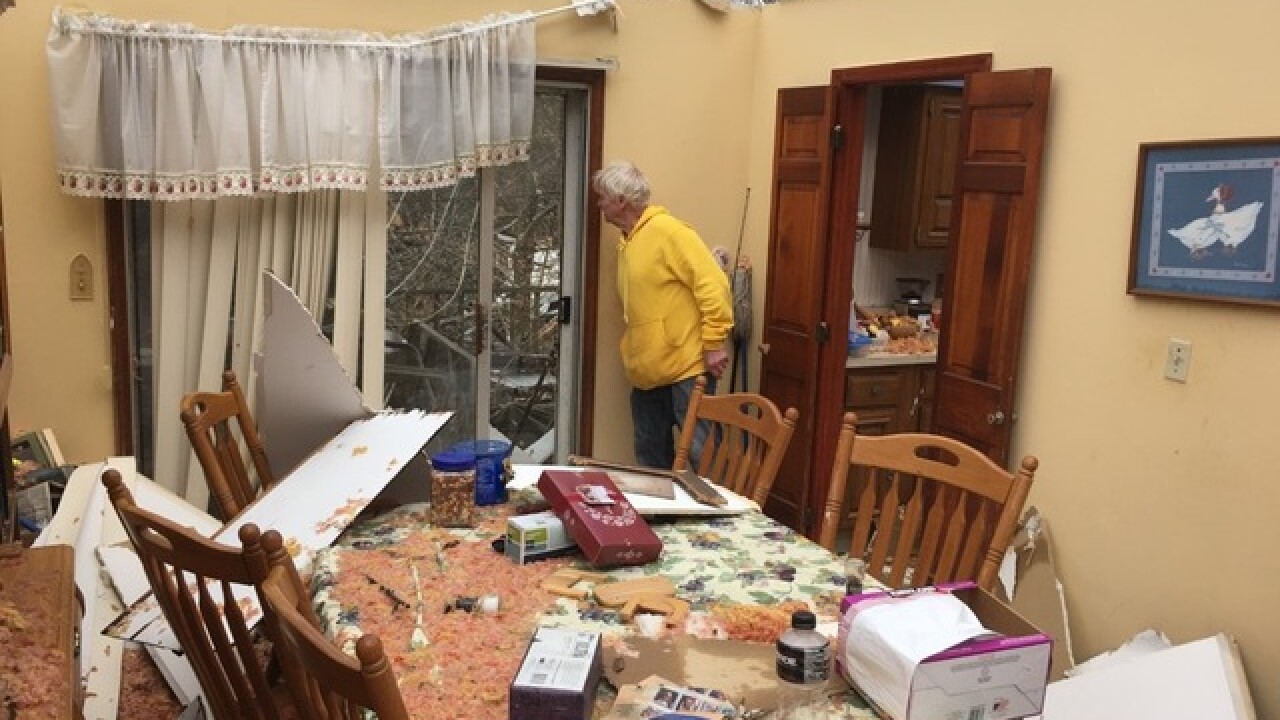 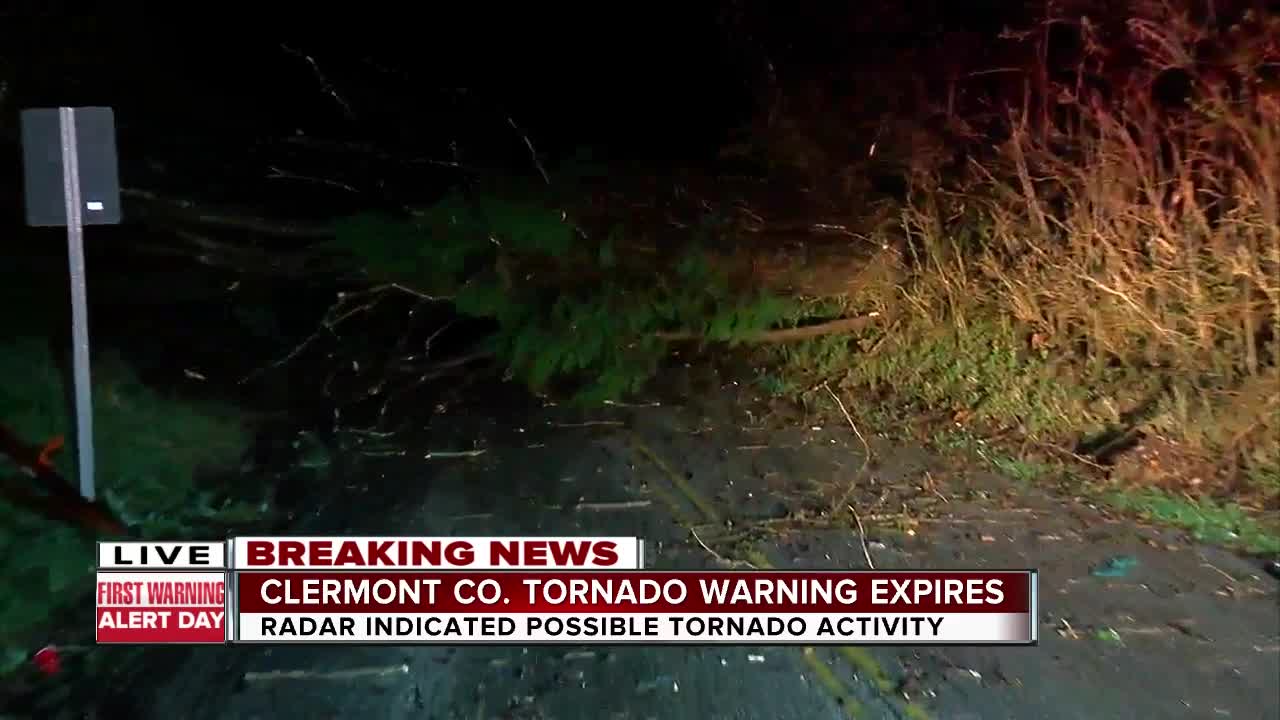 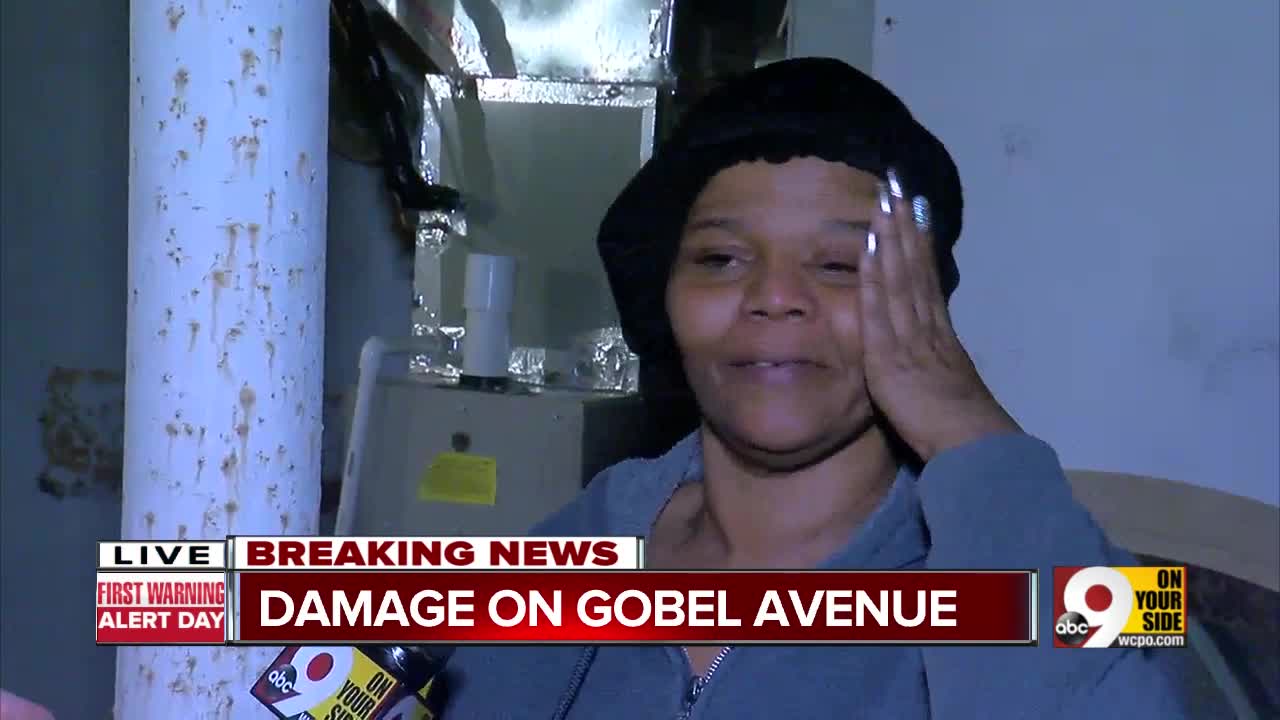 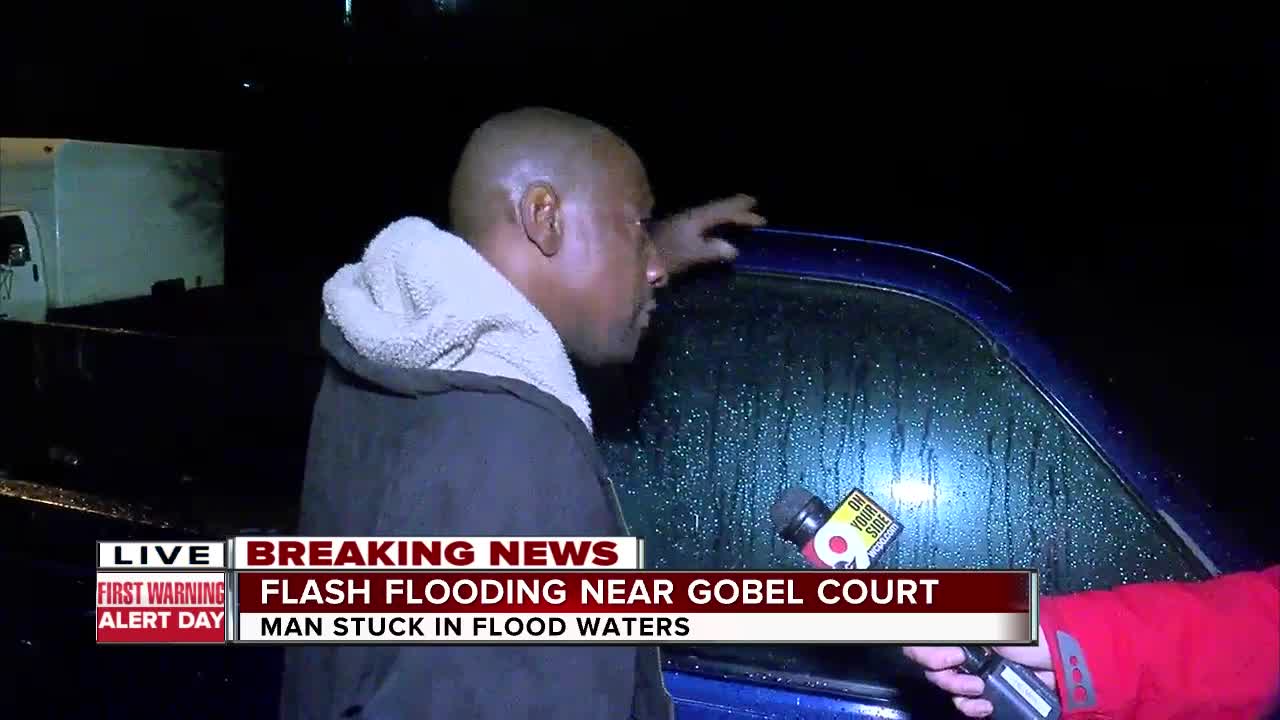 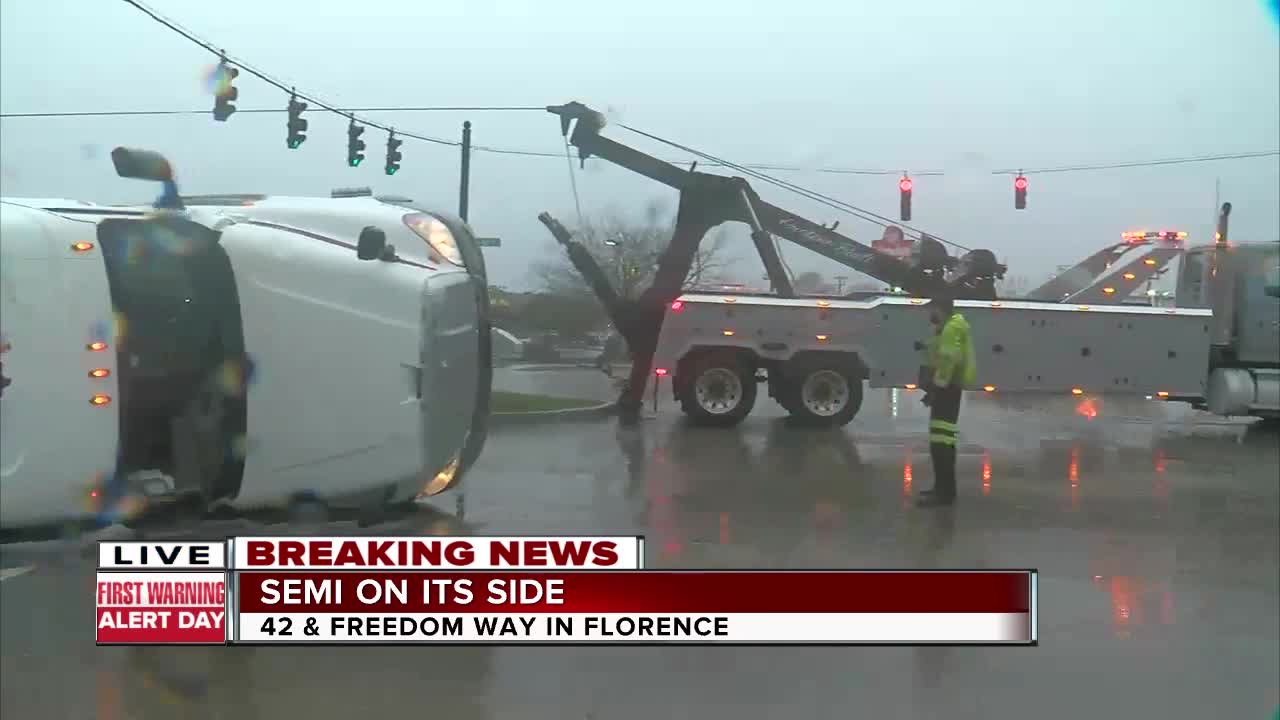 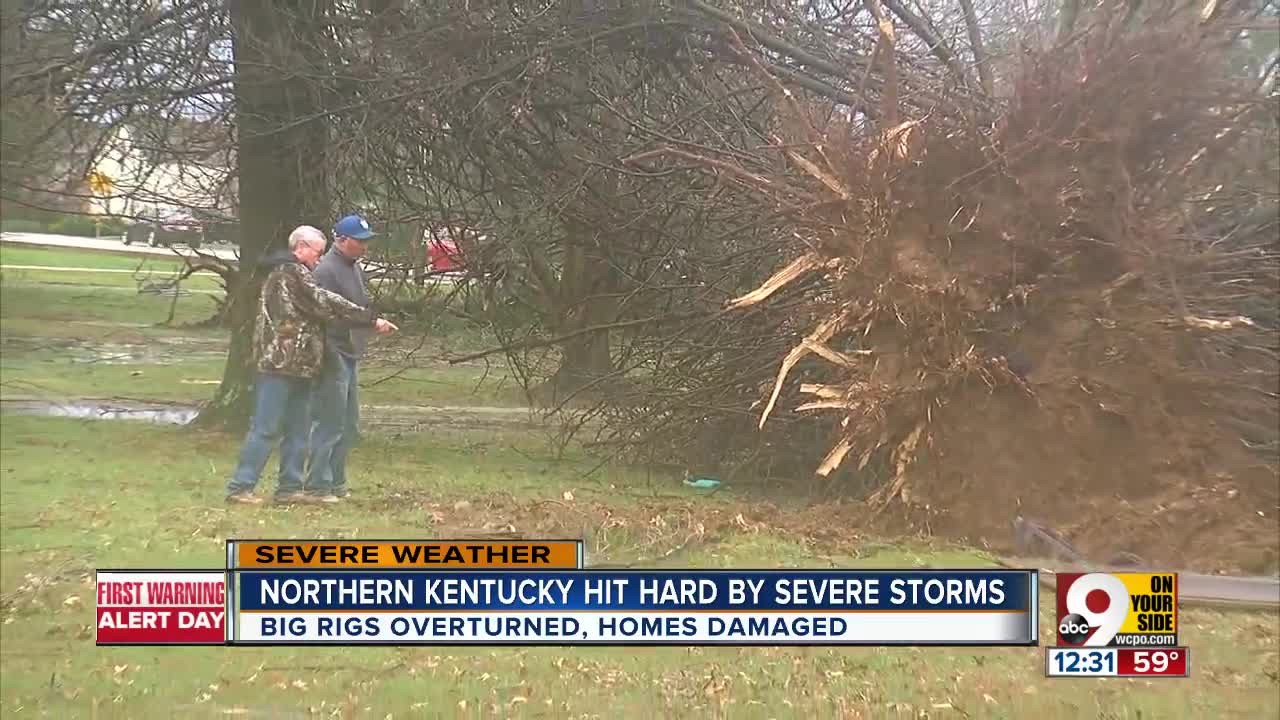 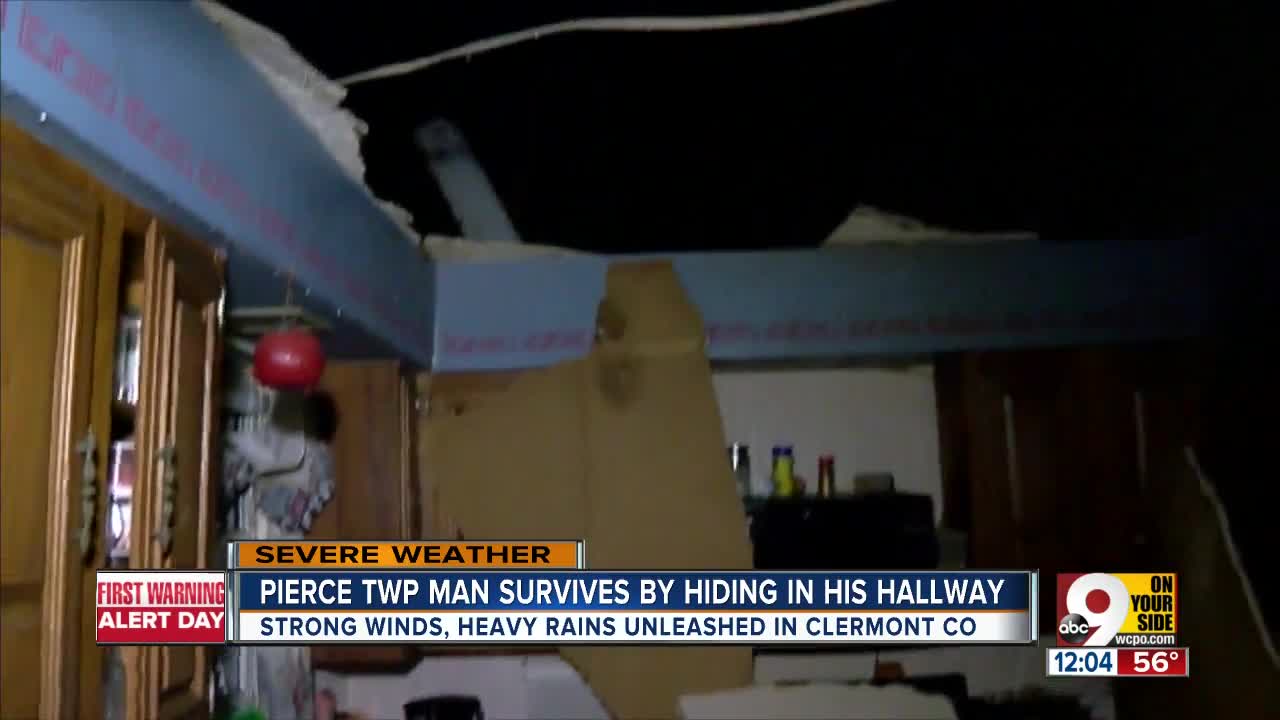 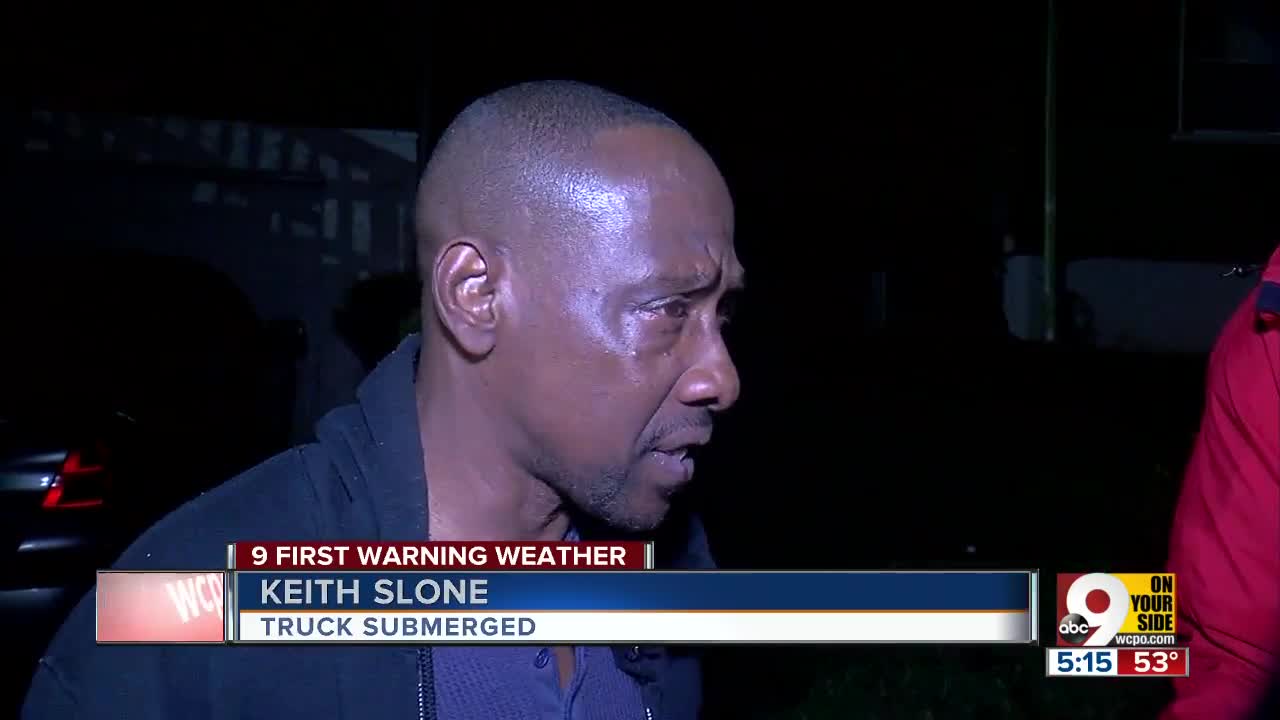 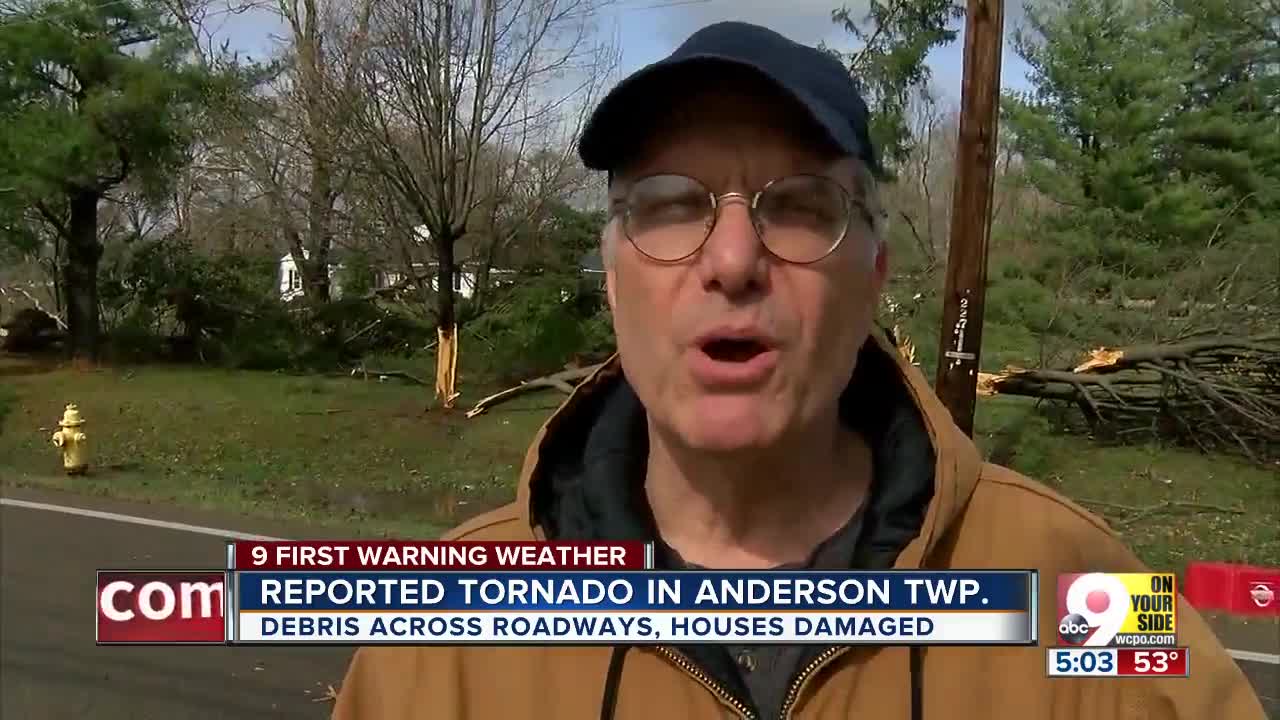 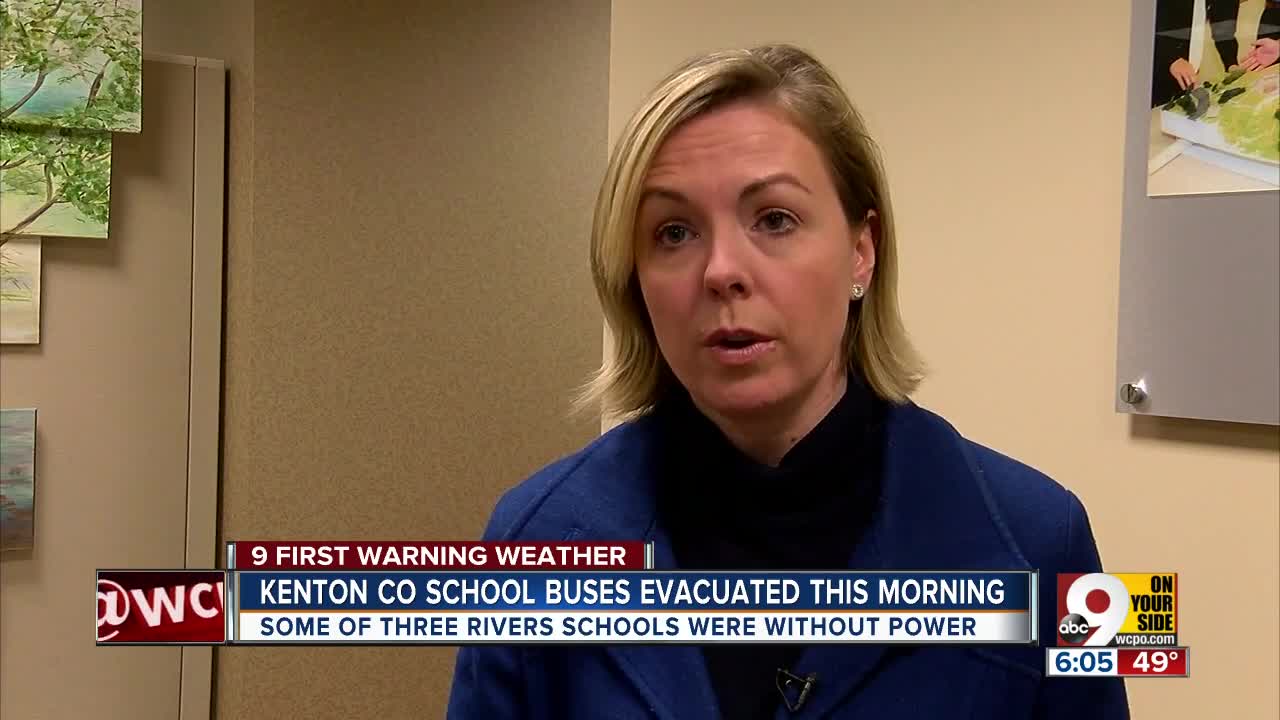 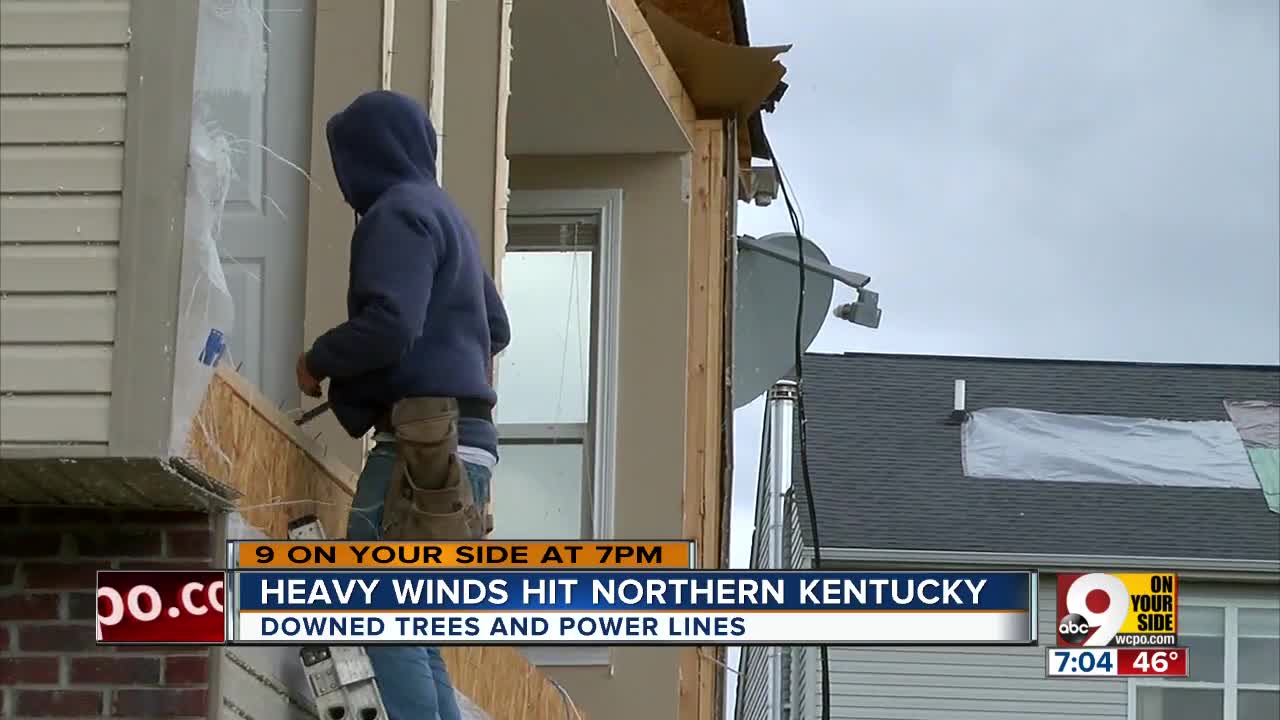 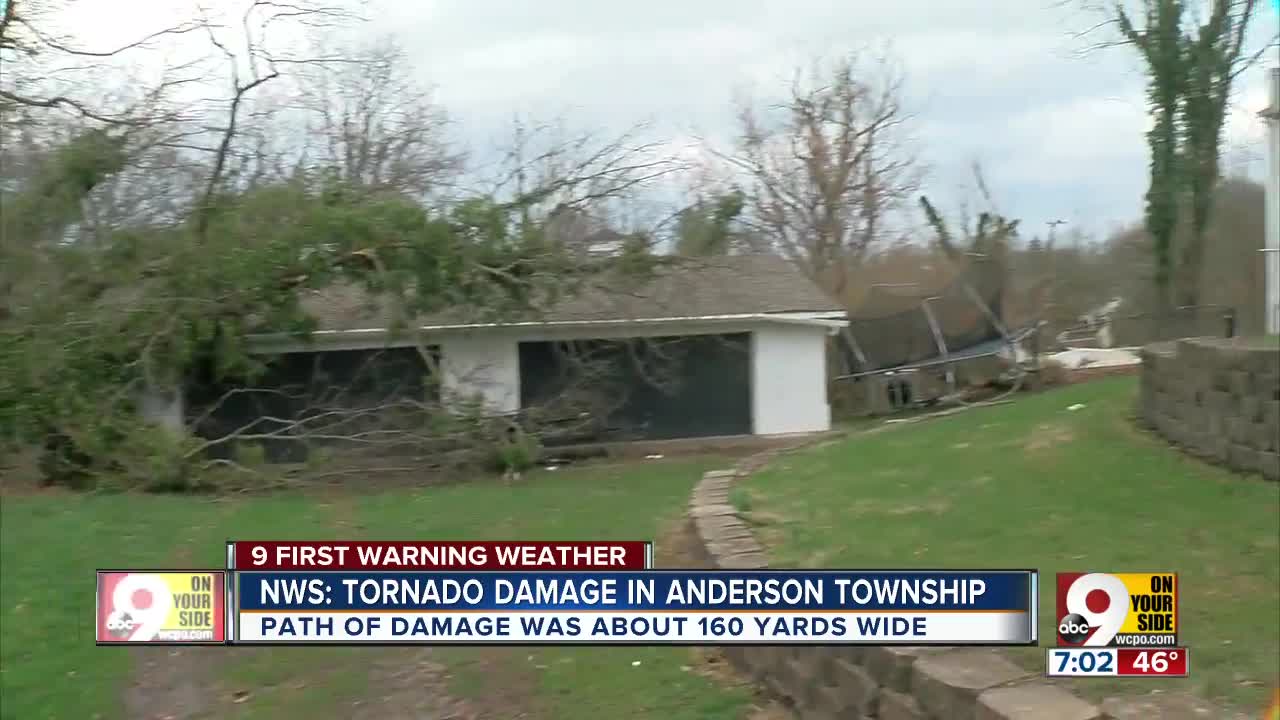 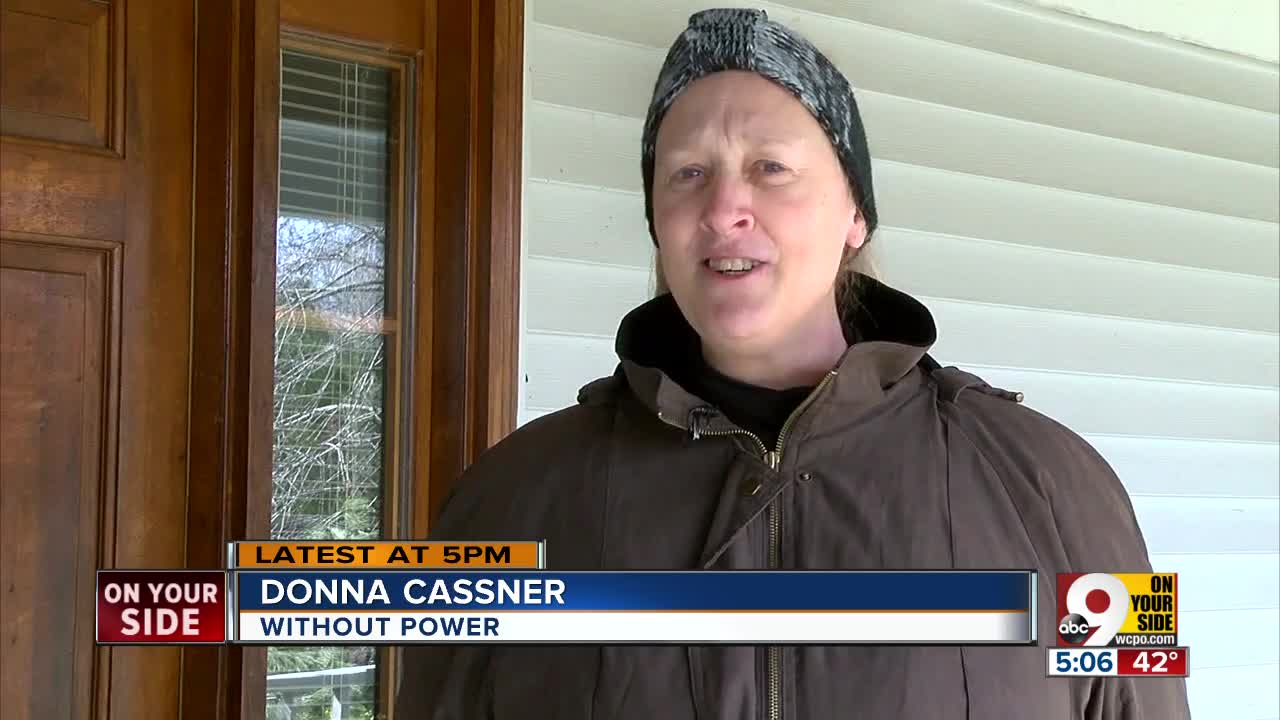 In Anderson Township, a path of tornadic damage was 1.04 miles long and about 160 yards wide. Eighty mph winds from the EF0 tornado struck at about 7:03 a.m. NWS officials also determined an EF1 tornado hit Amelia at about 3:38 a.m. Wednesday. It carried 110 mph winds for 6.4 miles.

Officials said Thursday a 250-yard-wide EF0 tornado caused damage near Leesburg in Highland County as it carved a seven-mile-long path with 85 mph winds around 2:30 a.m. Wednesday. Also in Highland County, an EF0 tornado struck Greenfield at 2:40 a.m. while an EF1 tornado hit New Market at 7:39 a.m.

Another survey team investigated damage in Northern Kentucky's Boone and Kenton counties, but found straight-line winds, not a tornado, caused damage there.

Chopper 9 surveyed the damage in Anderson Township from above:

A 4-inch-wide tree limb broke a hole through the living room ceiling of Mark Stefan's Anderson Township home. The front of his house was littered with limbs from 80-year-old white pines.

"We got off really easily," he said. "It could have been a lot worse with the big trees."

The entire roof of Carlon Addison's home on Locust Lake Road in Amelia was torn off, and fallen trees blocked state Route 125 near Oak Street in Amelia.

"I’m just lucky I got out of bed," Addison said. "I heard the noise, and I went toward the bathroom, so when I got halfway in the hallway, the whole thing just caved in like a big freight train coming through here.”

Addison, who has lived in the home for 24 years, said a garage out back was also destroyed, but neighbors just across the street experienced little to no storm damage.

Watch an interview with Addison below:

Farther east, in Brown County, several mobile homes were ripped from their foundations on Martin Alexander Road in Sardinia. At least one was turned on its side, and another appeared to be destroyed.

In Burlington, winds roared through as students were getting on school buses. A home on Pleasant Valley Road lost shingles and a huge oak tree in the front yard, not far from a bus stop where Bruce Thompson's grandson was waiting a half-hour earlier.

The storm threw power lines and poles to the ground and tossed huge trees like toys.

"It was barely sprinkling when I put him out to the bus," Thompson said. "He goes out at 6:35, and power went off at 6:50, and that's when it started with the wind. And he had just gotten on the bus, I think, before it rolled in here."

The kids had to be picked up after the worst of it, Thompson said.

Also in Burlington, the storms ripped off the side of a home on Colby Court:

Just south of there, wind toppled the steeple at Walton's First Baptist Church and sent it flying into the middle of Main Street. Emergency crews blocked the road until the steeple could be moved to the side:

@WCPO church steeple down at Walton Baptist and roof from the post office has been blown off in Walton, Boone Co. pic.twitter.com/jhUzB0pUPH

Strong winds also damaged the church's siding, pastor David Wiggins said, but the building didn't have any water damage. Wiggins said he thought the debris would be cleaned up before Wednesday night.

The timing of the storm Wednesday morning proved tricky for local schools. In Kenton County, 15 schools buses were on the road when the weather hit. Some of those buses had to evacuate.

Three Rivers School District also had its hands full after the students were dropped off, the entire campus of high school, middle school and elementary school were without power. Superintendent Craig Hockenberry said 30-40 percent of parents picked up their kids, but the emergency generators worked well for those who stayed.

"Our building is equiped for us to survive in there," he said. "We have enough food and water for up to a week, so there was no sense of urgency to get it out there."

Hail hammered parts of the region; one person sent a photo of 2-inch hail in northern Dearborn County, Indiana.

Flooding closed Columbia Parkway east of Columbia-Tusculum at "Dead Man's Curve" as well as between Taft Road and Delta Avenue. The ramp from I-71 southbound to I-275 eastbound was also closed by flooding.

On Cincinnati's West Side, flooding trapped a man in his truck and filled Anna Ramsey's basement on Gobel Avenue in Westwood. On that same street, flash floods inundated Keith Slone's pickup truck.

"My girlfriend’s daughter said, ‘Where’s your truck at, Keith?’ I came outside. No truck!" Slone said.

"It was submerged underwater. About an hour later, I see the top of my truck. ... The whole thing was under water. You didn't see nothing. And when the fire people came they said there was at least seven feet of water out here."

Along state Route 771 near Leesburg, in Highland County, a farm structure completely collapsed under a reported tornado.

No injuries were reported.