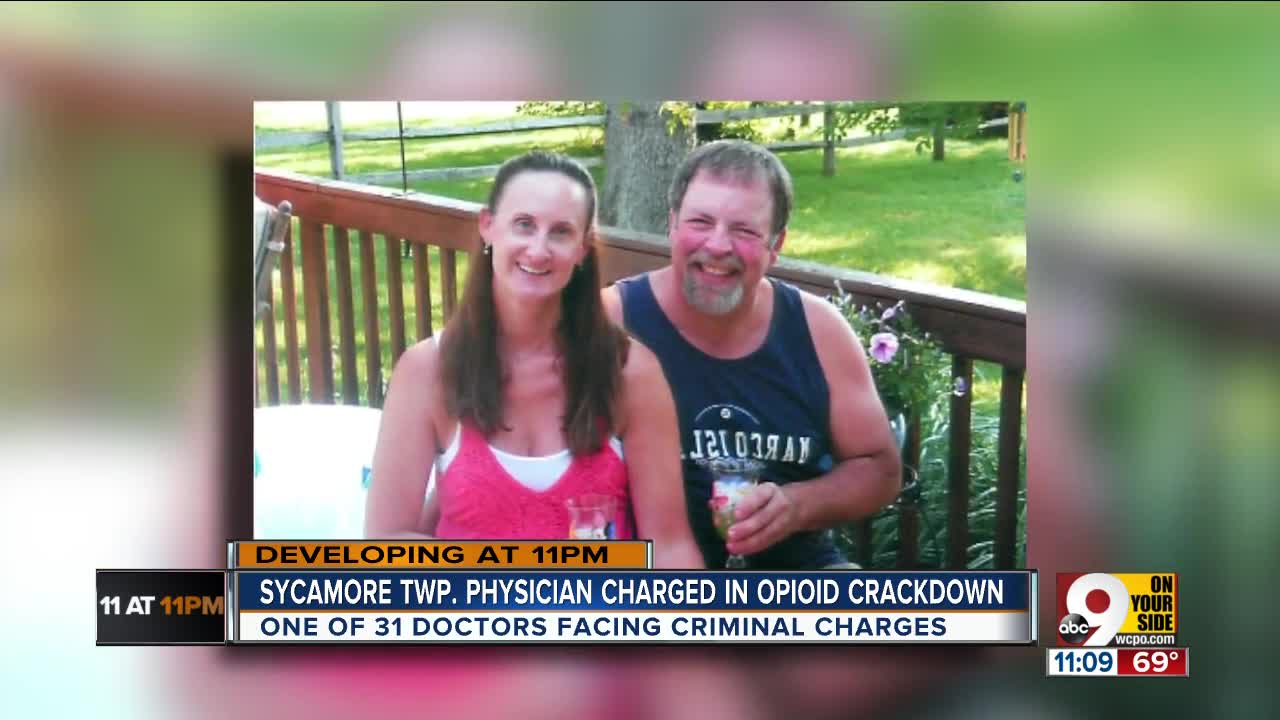 Noschang prescribed oxycodone, alprozolam and fentanyl patches to Jan Tyner, who would overdose on all three just a day after an appointment.

CINCINNATI -- After Jan Tyner died of a drug overdose in 2011, the Hamilton County Coroner's Office determined the cause of his death was acute oxycodone, fentanyl and alprazolam intoxication.

Tyner was a patient of Sycamore Township physician Raymond Noschang when he died. Now Noschang is one of 31 doctors facing criminal charges in a huge federal investigation into the over-prescribing of opioids.

The Department of Justice revealed the impact of its investigation at a news conference in Cincinnati Wednesday. It named 60 people as defendants – including seven pharmacists, eight nurse practitioners and seven other licensed medical professionals.

“It targets the so-called medical professionals who abuse their oaths and abandon their responsibilities to patients who trusted them,” said Amy Hess of the FBI. “It illustrates the lure of greed from making a profit at the expense of those that need treatment.”

Together, the defendants are accused of issuing 350,000 prescriptions and 32 million pills.

Federal prosecutors say doctors like Noschang, the only Cincinnati-area doctor indicted in this investigation, used their prescription pads to deal drugs.

“It’s important that who abuse their authority by dealing drugs with their prescription pad be stopped and held accountable,” said U.S. Attorney Ben Glassman. “It's incumbent upon us as the Department of Justice and as law enforcement working together to make sure that they are not further harming the public.”

A jury determined Noschnag was not negligent in Tyner’s case. But Noschang, a medical doctor for 34 years, could go to prison if convicted in the DOJ crackdown.

Last week, the State Medical Board of Ohio notified Noschang he was at risk of losing his medical license for his treatment of a dozen patients since 2010. The board's letter to Noschang accused him of prescribing potentially dangerous amounts of drugs, ignoring signs that patients abused medications, and failing to document some of that care.

The list of opioids Noschang prescribed to Tyner includes oxycodone, alprozolam and fentanyl patches. The day before he died of a drug overdose, Tyner received another prescription for fentanyl.

WCPO made several attempts to contact Noschang on Wednesday but was unable to reach him. His office is closed.

Two doctors and three pharmacists from Ohio and three doctors and one dentist from Kentucky were charged as a result of the investigation by the Appalachian Regional Prescription Opioid Strike Force. The ARPO force, comprised of prosecutors, data analysts and special agents, started investigating in December in Ohio, Kentucky, Tennessee, West Virginia and Alabama.

Watch the press conference in the player below:

Assistant Attorney General Brian Benczkowski said the cost of the operation was about $3 million. The cost in healthcare fraud “remains to be seen and will have to be quantified down the road,” he said.

“We put all of that into one bucket … and that gives us a sense of who the true outlier physicans and medical professionals are,” Benczkowski said.