From The Vault: Al Schottelkotte and the stolen Rembrandt Schottelkotte presented it to Taft Museum chairman during the 11 p.m. newscast on Dec. 20, 1973. 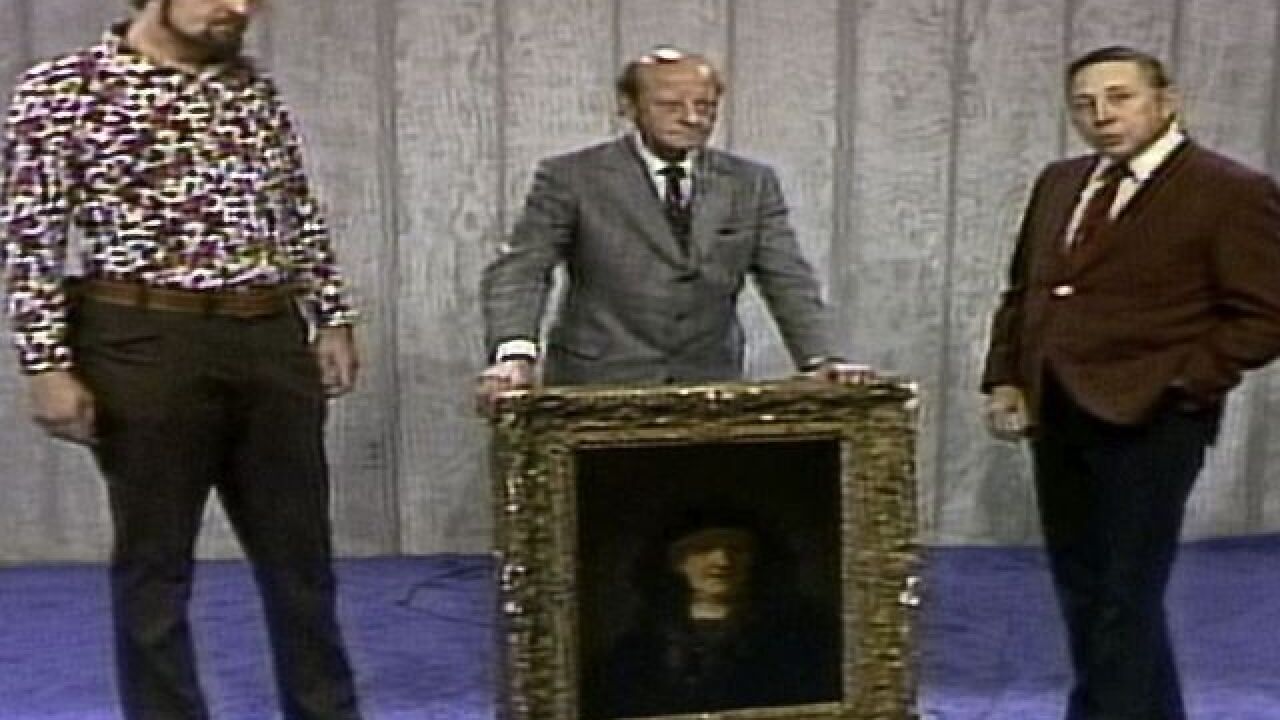 WATCH Al Schottelkotte's reports on the recovery of a stolen Rembrandt in the video player above.

CINCINNATI – One of the oddest chapters in Cincinnati history involved the theft of two Rembrandt paintings and the recovery of one of them on live TV by legendary WCPO anchor Al Schottelkotte.

The story had all the makings of a made-for-TV movie – a whodunit with a few bumbling thieves; ransom demands and threats; a mysterious, smooth-talking intermediary, and two art treasures by one of history's foremost painters – only it was real and played out live on Channel 9.

The paintings were stolen on Dec. 18, 1973 after two burglars with guns tied up an unarmed night watchman making his rounds outside the Taft Museum. He was the only guard on duty. The thieves actually passed up a pair of multimillion-dollar Rembrandts and grabbed two of lesser value – Man Leaning on a Sill ($250,000)  and Portrait of an Elderly Woman ($80,000). They were larger, the thieves explained later, so they figured they had to be worth more.

Two days later, a West-Side bar owner and real estate broker named James Hough called Schottelkotte and said the thieves had contacted him to be their intermediary. They demanded $300,000 from the museum or they would set fire to the paintings.

Hough said the thieves wanted to be sure they wouldn't be double-crossed, so they wanted Schottelkotte involved. Schottelkotte had Cincinnati's most-watched newscast for decades and a reputation of trust.

Hough said the thieves would return the paintings one at a time. The museum balked at the thieves' demands but ultimately agreed to pay $100,000.

The thieves said they would drop off one painting, then call Hough with the location, and Hough would deliver it to Schottelkotte to turn over to the museum. The thieves wanted to see for themselves – on TV -  that a museum official had received the painting  and that the museum had declared it authentic.

Hough called Schottelkotte about 9:30 p.m. on Dec. 20 and said he had Portrait of an Elderly Woman at the Regis Lounge, on Harrison Avenue, just outside of Cheviot.

When Schottelkotte  walked into the bar, about 10 p.m., the painting was covered in a quilt and propped against a wall. The patrons stirred when Schottelkotte arrived, and when Hough removed the quilt, they gathered around to see what the fuss was all about.

Schottelkotte called Taft Museum Committee chairman John Warrington and told Warrington to call police and meet him at WCPO. Schottelkotte drove the painting and Hough to the TV station.

"I doubt if my car will ever carry a more distinguished bit of freight," Schottelkotte said later.

When viewers tuned in the 11 p.m. Al Schottelkotte News, they saw a closeup of Schottelkotte saying: "I've been in news work 30 years now and have had some rather strange and unexpected things happen, and possibly the most unexpected of all took place tonight."

The camera widened to show Schottelkotte and Hough standing on the set along with Warrington and the painting between them.

Schottelkotte knelt and read off the plaque on the frame:  "Portrait of an Elderly Woman, Rembrandt, 1669." Warrington verified that it was authentic, and police carried it off as evidence.

Hough said the thieves had directed him to a barn at Blue Rock Road and Springdale Pike and that's where he found the painting.

Hough swore he wasn't involved with the theft.  "I know you know I've got to be suspect No. 1, but I also know that I'm clean," he told WCPO.

Hough said he didn't know who the thieves were or why they contacted him. "If I knew who they are, I'd be in much more danger," he said. He did say he had some "connections" with the kind of people who would.

A few days later, the museum paid the ransom and within hours the drama was over. Police recovered Man Leaning on a Sill, arrested three Loveland men and got back all but $24 of the ransom money. They had spent that on fast food.

Police wouldn't say how they did it, but they did say they found the painting in the rear of the Lorelei Bar on Route 22 outside Morrow, in Clermont County. Later, they confirmed that they had left the $100,000 in an ice machine while a noisy Christmas party was going on inside and followed the thieves after they picked up the ransom.

The three men in their early 20s were identified as Carl E. Horsley,  Henry Dawn and Raymond McDonough. They were small-time crooks who had done jobs together, police said, but they were drawn to the Taft by the Rembrandt exhibit, which had been highly publicized.

The cops knew Hough. "He had a reputation for driving a convertible around with his pet lion in it," one said. "He had this know-it-all-attitude."

Hough told Johnson he would act as intermediary between the thieves and the museum, Horsley said later. That was a fine arrangement until Hough set up the ransom scheme, according to Johnson. Hough had negotiated a $15,000 finder's fee and Warrington had written him a check. Hough returned the check on Jan. 11, 1974, but it was too late. Johnson told the cops, and all of three thieves rolled on Hough and pleaded guilty to lesser charges.

Hough ended up facing the most serious charges – extortion and grand larceny – and was sentenced to three to 20 years. Hough was paroled after four years and filed for bankruptcy a decade later.

Horsley was later arrested for shoplifting candy and gum from a store. He even bungled that.

And, after decades passed, art experts decided that the stolen Rembrandts were not Rembrandts after all but copies made by his students. The Taft Museum no longer displays them.

WATCH a former police officer's recollections about the theft in the video player above.

READ more about the theft in the book, "Stealing Rembrandts: The Untold Stories of Notorious Art Thefts," by Anthony M. Amore and Tom Mashberg.