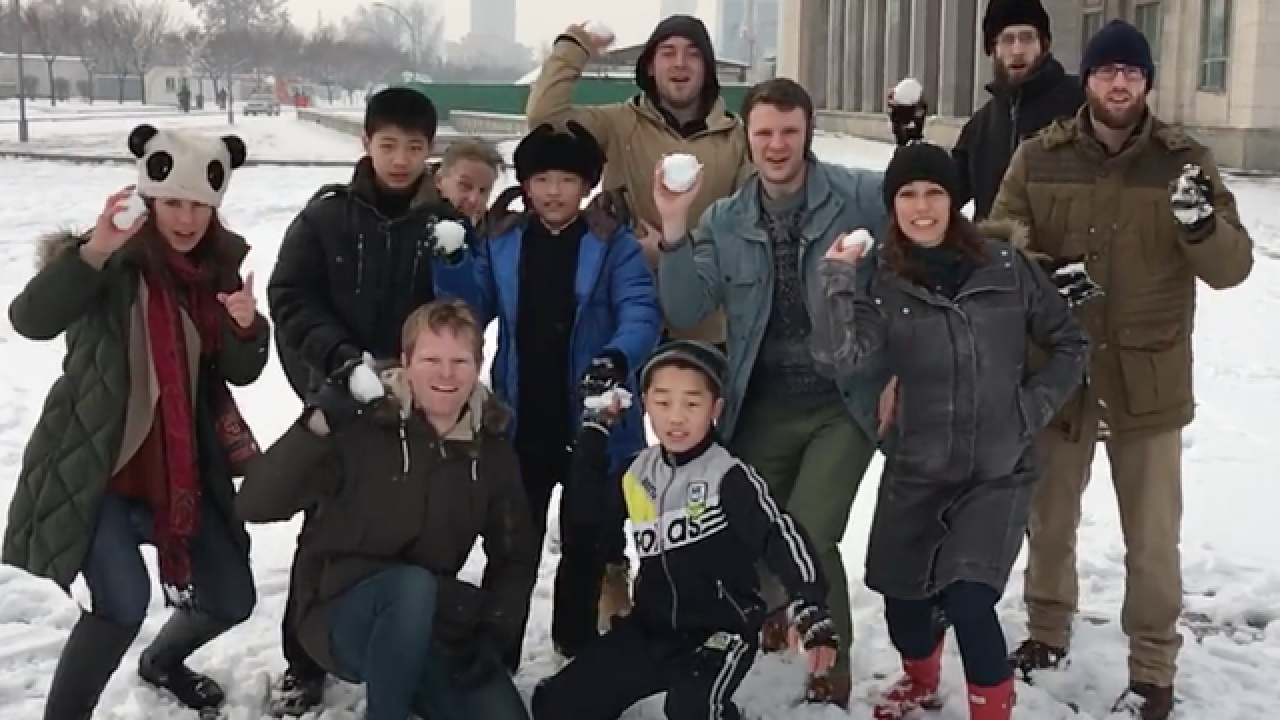 Copyright 2017 Scripps Media, Inc. All rights reserved. This material may not be published, broadcast, rewritten, or redistributed.
<p>Otto Warmbier (in a blue jacket, fourth from the right) prepares to throw snowballs at the camera alongside the rest of his tour group in North Korea. He was arrested and charged with crimes against the North Korean state; after 17 months of imprisonment, he was returned home comatose.</p>

Cheeks flushed, earmuffs askew, he looks from side to side at the rest of his tour group as he packs a handful of snow into a ball with his bare hands. The people standing around him are mostly Americans; three appear to be local children. All of them are seizing a moment of play in one of the most repressive countries in the world -- North Korea.

"Ready to throw it at me?" comes a voice from behind the camera. "Three, two, one."

Eleven snowballs sail through the air in slow motion. Eleven cold-reddened faces grin. Another smiling man sails into the frame with his arms spread like wings. Warmbier, in his blue coat, stands with his hand still extended, smile still fixed on his face.

Then time catches up. The formation breaks; Otto turns to his right and a burst of high laughter begins before the recording stops.

"This is the Otto I know and love," Austin Warmbier wrote when he shared the video with WCPO. "This is my brother."

RELATED: Family is relieved Warmbier is home, angry he was 'brutalized' in North Korea

The recording is only 30 seconds long. The moment it captured was even more brief. On a trip that had not been punctuated by Warmbier's arrest and 15-month imprisonment at the hands of the North Korean government, it might have disappeared into the increasingly crowded media library of the phone that took it -- been buried beneath a tide of other social media posts -- been folded smoothly into a mental landscape of fond, half-remembered moments abroad.

Instead, it became the last known gasp of normality and freedom in Warmbier's life.

The next time he appeared on video, he was pale, sobbing and begging the North Korean government for forgiveness. Kim Jong-un's regime claimed he had attempted to steal a propaganda poster from the hotel in which he was staying. After an hour-long trial, he was convicted of crimes against the state and sentenced to 15 years hard labor. Guards seized him under the arms and led him out of the room.

Warmbier returned to the United States Tuesday, 15 months after his initial imprisonment, but it wasn't the reunion his family hoped for. Warmbier is comatose, having sustained "severe neurological damage" during his imprisonment.

North Korean officials claimed he contracted botulism and fell into a coma, but doctors at the University of Cincinnati Medical Center said he showed no physical signs of such an illness.

There is little consolation available to his family now, except that he is finally home and in the care of people who truly want the best for him. He is unresponsive; he has lost a great deal of brain tissue.

As Cincinnati and the country search for answers and hope in his story, it would do well to remember that Warmbier is more than a symbol of North Korean brutality or of any administration's political successes.

He's an older brother of two, a son of parents who prayed for his return, and a 22-year-old college student who did not anticipate the direction his life would take in the days after that video.

Fifteen months and 6,703 miles away from where we are now, Otto Warmbier is smiling.