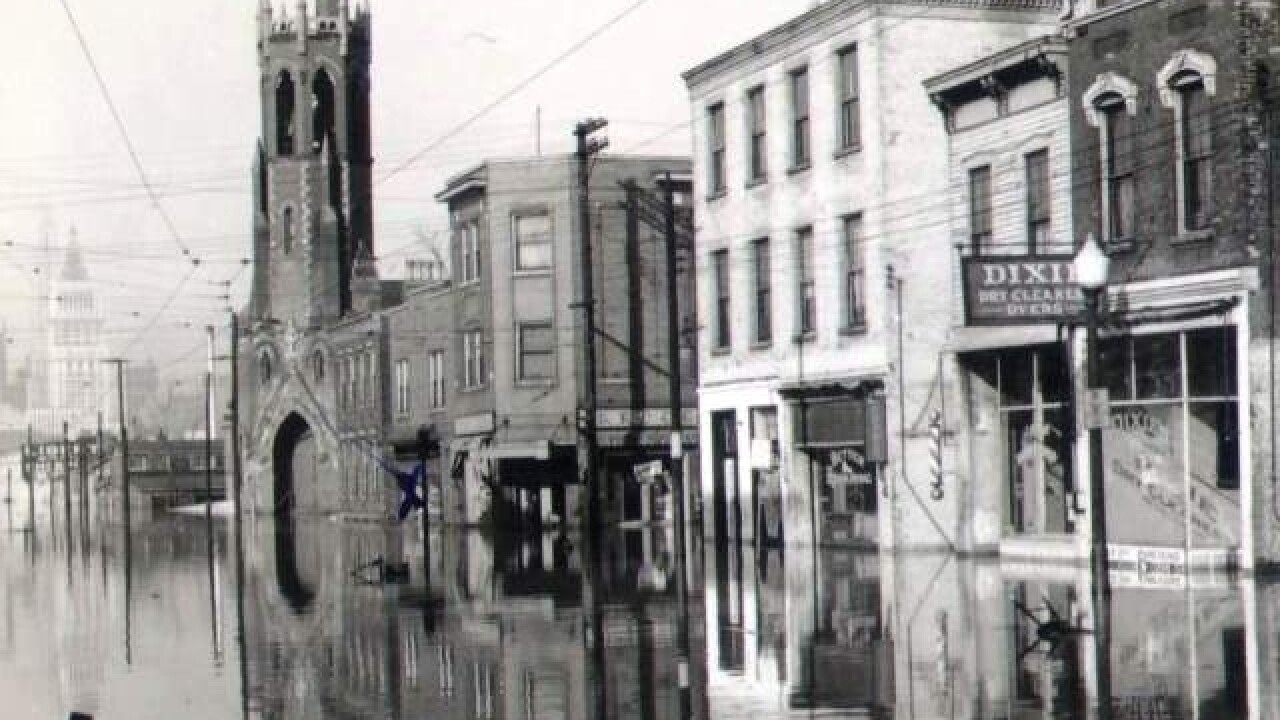 CINCINNATI -- As flood waters from the Ohio River subsided Monday, many in the Tri-State were reminded of devastating power the river can hold.

Many in the Tri-State don't have to look too far back to remember the damage done by the sudden swelling of the Ohio and its tributaries.

In March 1997, the Ohio crested just under 65 feet, submerging low-lying Cincinnati streets and some areas of the river cities in Northern Kentucky. The worst area hit though might have been Falmouth, Ky. in Pendleton County. It was there that the Licking River spilled over its banks and submerges much of the small town.

That devastation though could not compare to the biggest flood to hit the region in January 1937. It was in that month the Ohio crested at just under 80 feet. Floodwaters submerged about 40 percent of Covington, and a fifth of Cincinnati.

Below are a few snapshots of that devastation on both sides of the river as it crept up Madison Avenue in Covington and up to Union Terminal in Cincinnati.

Also, check out this gallery of flooding in the Tri-State here.

Cincinnati and Covington river fronts in 1937 and now

In a flood you want to seek high ground. In 1937, this photo was snapped of the Ohio River from Devou Park. The low area where Interstate 75 is located at the Cut-in-the-Hill became a flood plane for the swollen waterway. A similar view from today shows how far the muddy waters spread.

Cincinnati’s Union Terminal brought to a standstill by 1937 flood

Train transportation nearly ground to a halt in 1937 as flood waters encroached on the hub located in Cincinnati’s west side. In the 1937 photo the waters can be seen from what is today the parking lot for the Cincinnati Museum Center.

Madison Avenue became a river itself in 1937

Trinity Episcopal Church still serves parishioners near 4th Street and Madison Avenue in Covington. In the before photo here the Ohio River makes its way up the city’s main street with the church in the foreground. Off in the distance is the Cincinnati skyline, equally submerged.

Cincinnati’s Northside was submerged as well

The tributaries of the Ohio River backed up as well during the flood of 1937, creating problems for neighborhoods like Northside. Spring Grove Avenue was under water, as seen in this before picture. In the foreground of both photos is the Liberty Theater that stopped showing moving pictures in the late 1920s. The theater building still stands today and was designated a national historic site in the 1980s.