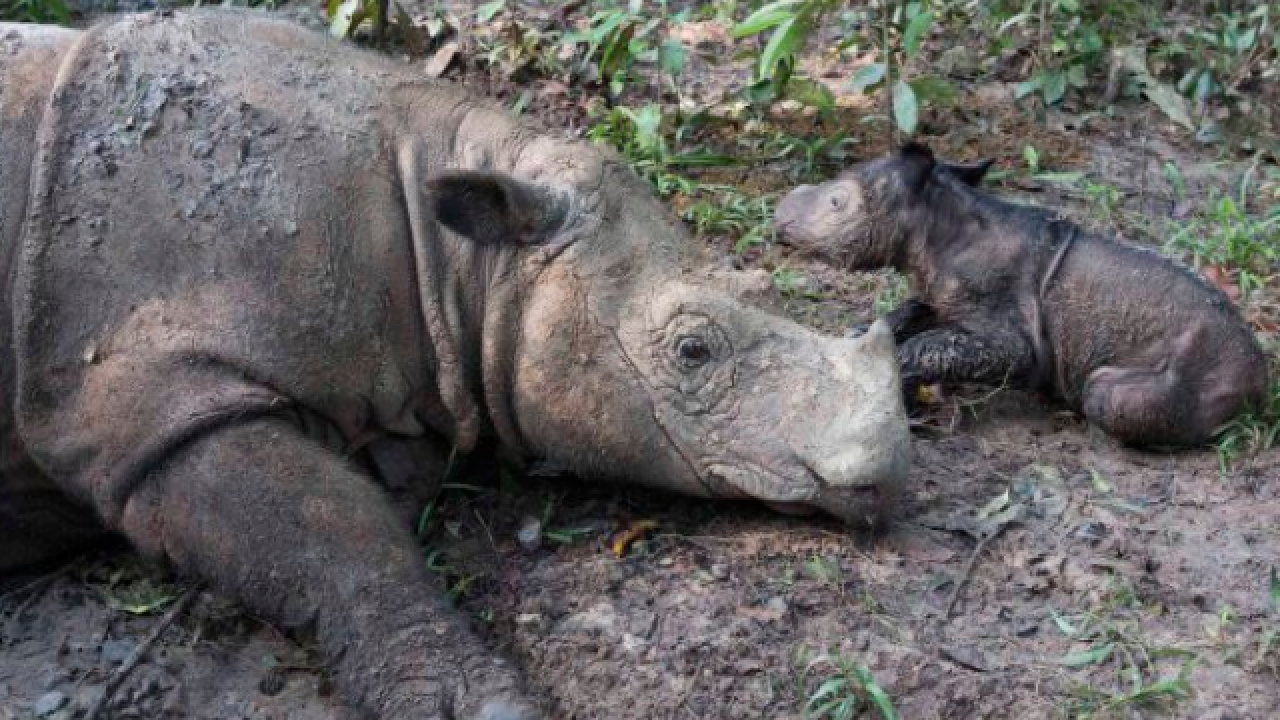 <p><span style="font-weight:400;">A Sumatran rhino, Ratu, gave birth to a calf at the Sumatran Rhino Sanctuary in Indonesia on Thursday.</span></p>

CINCINNATI - A rhino from the Cincinnati Zoo sired its second calf in Sumatra on Thursday, raising the critically-endangered population and the Zoo's achievements toward saving the species.

Andalas, father of the calf born at the Sumatran Rhino Sanctuary in Indonesia, was the first Sumatran rhino born in captivity in more than 112 years when he was born at the Cincinnati Zoo in 2001. Andalas was moved to the SRS in 2007.

The Cincinnati Zoo has been at the forefront of the Sumatran rhino captive breeding program since it began in the 1980s. Dr. Terri Roth, director of the Zoo’s Center for Conservation & Research of Endangered Wildlife (CREW), successfully bred Andalas after a breakthrough in research. Two more births followed in Cincinnati - a girl, Suci, in 2004 and another boy, Harapan, in 2007.

Harapan joined his brother, Andalas, at the SRS last November. Harapan was the only Sumatran rhino left in captivity in the Western Hemisphere until his departure from Cincinnati.

A team from the Cincinnati Zoo traveled more than 10,000 miles on a cargo plane with the 1,800-pound rhino. WCPO photojournalist Emily Maxwell was the only journalist to document the staff's journey to Indonesia.

SEE Emily Maxwell's story and photos from the journey.

The move ended the Sumatran rhino breeding program at the Cincinnati Zoo. Breeding efforts are now concentrated in Indonesia but CREW continues to lend support.

Harapan is expected to follow in his brother’s footsteps and will be bred with a female at the sanctuary in the future.

Roth celebrated Tuesday's birth in a release from the zoo. Roth was at the SRS last winter when Andalas and Ratu were put together for the breeding session that produced the calf.

“The birth of any healthy Sumatran rhino calf is reason to rejoice, but the birth of a female calf when the species is so very close to extinction makes this a monumental event," Roth said. "We applaud our Indonesian colleagues on their success and our own Andalas for siring his second calf."

Fewer than 100 Sumatran rhinos are left.

Cincinnati Zoo keeper Paul Reinhart was in Sumatra  for the birth of the calf, along with veterinarians and keepers from the SRS. Reinhart is the only person in the world to have witnessed the births of all five Sumatran rhinos born in captivity in the last century.

Reinhart arrived in Indonesia in late April and slept by Ratu’s den for the last few nights. He could hardly contain his joy.

“She's about perfect!" Reinhart texted.  "Ratu was / is stellar. Sometimes I can’t believe how fortunate I’ve been, to be part of something so extraordinary.  It shows how good things can go when people come together.”

Reinhart cared for all three rhinos born in Cincinnati.

Reinhart will stay at the SRS for a few weeks to assist with the calf and spend some quality time with Andalas and Harapan, the rhino he accompanied from Cincinnati to his new home last year.

Andalas's first calf at the SRS, a male named Andatu, was born to Ratu in 2012 and made history as the first Sumatran rhino calf produced in captivity in Indonesia.