Student on Cincinnati Christian University's decision to close: 'l feel like I’ve been lied to' 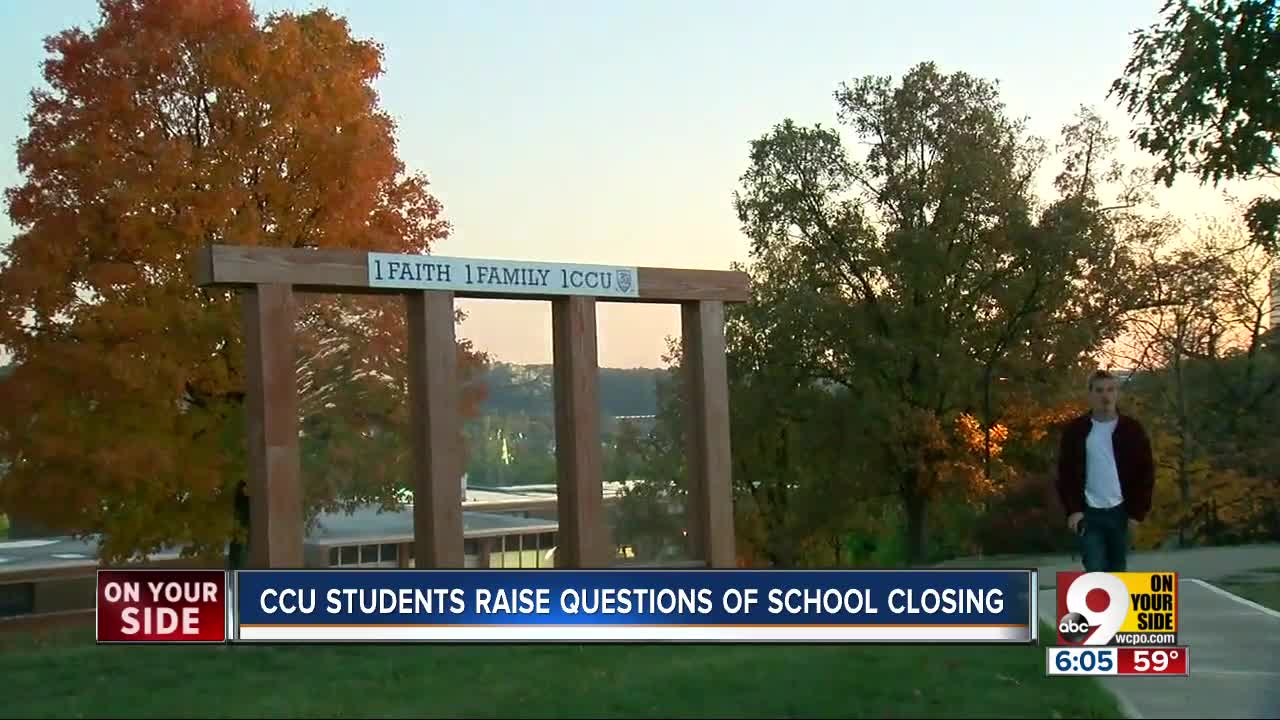 The 95-year-old Cincinnati Christian University will officially cease to exist as an educational institution at the start of 2020, having decided to withdraw from its accreditation rather than attempt to keep it. The decision will put CCU out of commission in the middle of the school year.

CINCINNATI — Students at Cincinnati Christian University say they’re not getting straight answers as to why the 95-year-old university is suddenly closing.

Straddled with a $5.8 million mortgage debt and threatened with losing its accreditation, CCU announced it’s closing at the end of the semester, leaving students scrambling to apply to other schools.

“I feel like I’ve been lied to for four years since I’ve been here honestly. It sucks,” said Scottie Gorslene, a senior football player.

“We got an email at about 5:15 telling us that the school was shutting down.

“They haven’t told us anything. They said, ‘I don’t know if the trustees are going to talk.’ We all just left.”

CCU announced the change as a “new historic partnership” with Central Christian College of the Bible. But Jim Sullivan, who used to attend CCU, called that spin.

“They are spinning this as a very positive thing. I don’t know that that’s the way I would,” said Sullivan. “I think we need to acknowledge that there’s some mishandling that’s happened here.”

There have been some red flags.

The Higher Learning Commission issued a letter of warning in July, telling CCU it could lose its accreditation by next summer.

Instead of answering the commission’s concerns, the school chose to withdraw its accreditation and close.

“It’s something that’s been in the works for a while now,” Sullivan said, “and some bad decisions along the way.”

As for CCU’s mortgage debt, it owes that to Central Bank and Trust. According to the Higher Learning Commission, university president Ron Heineman happens to be the chief restructuring officer for the same bank. In that position, Heineman oversaw the bank’s line of credit to CCU.

According to the Securities and Exchange Commission, Heineman has been fined and penalized for making false statements to auditors in the past and owes more than $300,000 in state taxes.

He was also in charge of the board of trustees’ finances while he was trustee for the school.

“This has been mismanagement from the people who are at the top,” Gorslene said. “They just didn’t do their job is what it sounds like.”

WCPO called and submitted several emails to CCUs staff and spokesperson only to get no answers.

We knocked at Heineman’s home but got no answers there, either.

In a letter, the school provided a list of recommended schools where students can apply and transfer. But students say it’s been hard enough to even request a transcript because everyone is trying to do it at the same time.

WCPO will keep pressing for answers and reporting how it goes.

RELATED: Cincinnati Christian University decides not to fight for accreditation, will close in 2020.