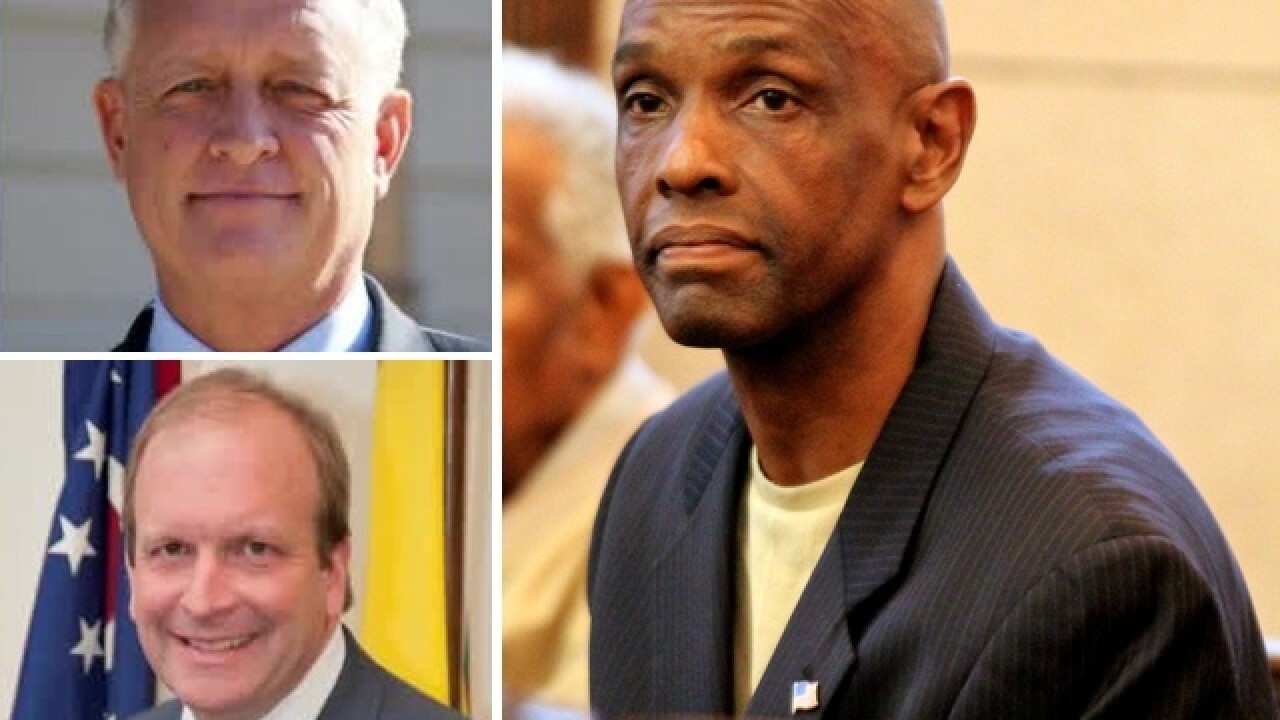 “He clearly doesn’t understand what the law is,” Deters scoffed. “This is coming from a guy who engineered to get his own wife his [city] council seat.”

Earlier in the day, Thomas called a news conference to demand a special prosecutor investigate DeWine and Deters and also to call for "racism, cronyism and all the other isms" to be cleaned out of the county courthouse.

Citing emails from April obtained by City Beat, Democrat Thomas accused Republicans DeWine and Deters of violating Ohio law when DeWine asked Deters to give a summer internship to his son Matt, a freshman at Miami University. Deters eagerly complied, according to an email Deters sent to his assistant.

Thomas, a vocal supporter of Hunter, the suspended former juvenile court judge, said DeWine and Deters appear to have violated Section 2921.43 of the Ohio Revised Code – the same statute under which Deters' office prosecuted Hunter in 2014. That statute forbids public officials from using their position to secure a public contract for themselves, their families or their business associates.

But that statute doesn’t apply to DeWine’s request, Deters said on the "Bill Cunningham Show" on WLW Radio.

"Pat simply asked if we had room in my program.  His [older] son had worked there before and I told Janet, 'Sure.  Make sure he gets invited to be an intern.'

"It's sickening to drag the DeWine family into this," Deters said. "They have never asked me or anyone I know to do anything improper. (Thomas) is doing this to save Tracie Hunter."

On the other hand, Deters said, Hunter did use the authority of her office to try to help her brother, a county employee, in a disciplinary hearing, and that why she was charged. Deters repeated that he did not prosecute Hunter - that the presiding judge, Beth Myers, hired two special prosecutors to handle Hunter's case.

"Cecil Thomas is trying to obfuscate what Tracie Hunter did," Deters said.

Deters said his office hired 37 interns this summer at $11 per hour, and sometimes he hires from Democratic families.

"I didn't hear from Thomas when the Mallory kids worked there," Deters said.

Deters accused Thomas and the media of hypocrisy.

"The Democratic Party chairman's son-in-law works for the clerk of courts (newly elected Democrat Aftab Pureval) and you don't hear a peep about that," Deters said.

"It's frightening that anyone could give credibility to any of this. The whole thing is ludicrous," Deters said.

Speaking on the courthouse steps in the morning, Thomas denied that his complaint was all about Hunter.

"You might say, 'What's the big deal? It's only a judge helping his son get a summer college internship," Thomas said. "However, we need not forget the charge and conviction of Judge Tracie Hunter under this exact same statute even though nothing she did came anywhere close to the elements in the statute.

"Ironically, Judge DeWine was one of three judges that upheld her conviction on appeal. Prosecutor Deters knew that by honoring the request of a Supreme Court justice to hire his son his office could potentially receive favorable rulings in return ... at least from one judge," Thomas said.

Thomas said DeWine and Deters could be guilty of a fourth-degree felony and called for Ohio Chief Justice Maureen O'Connor to appoint a special prosecutor. A felony conviction would disqualify DeWine from the bench in Ohio. Thomas also asked the Ohio Ethics Commission to determine whether DeWine and Deters should face discipline.

”As a judge who was wrongfully suspended from office after accusations that were initiated by Prosecutor Joe Deters, I absolutely believe that Patrick DeWine should be investigated, prosecuted and sentenced to jail," Hunter said.

Hunter was convicted after her brother testified that she gave him private court documents before a disciplinary hearing. Hunter's brother, who worked in the juvenile jail, had been fired for punching an inmate, according to court records. Hunter gave her brother the inmate's medical records among other things.

Hunter had been charged with seven other counts including forgery, backdating court documents to prevent prosecutors from appealing her rulings and misusing a court credit card to pay for legal filings in lawsuits against her. The jury did not reach a unanimous verdict on those charges and the special prosecutors dropped them rather than retry the case.

Hunter, a Democrat, won her seat in a contentious 2010 election and recount against Republican John Williams. She claimed she was targeted by Republican insiders at the courthouse because of it. A host of disputes and lawsuits followed.

Hunter was sentenced to six months in the Justice Center in 2014 but has she has been free while she appeals.

Federal Judge Timothy Black blocked a Common Pleas judge from sending Hunter to jail in May 2016. Black has continued the case until September.

Thomas went further to attack the "racism, cronyism and other isms rooted" for "far too long" in the courthouse.

“This place behind me needs to be fully cleaned out,” Thomas said.

The City Beat article points out that DeWine's older son, Richard Michael, also had a summer job in Deters' office.

"If you read more of the article, you will see that it's littered with nepotism and cronyism of friends getting jobs for their family members," Thomas said. "And we don't know how far back you can dig and you probably will find a tremendous amount of individuals that were given the favoritism of these positions."

Thomas recalled the case of former County Auditor Joe DeCourcy, a Republican who was forced to resign in 1990 after giving property tax breaks to friends and family. Auditor staffers wrote FOJ - Friend of Joe - on their tax forms.

DeCourcy and his chief deputy and nephew, Mickey Esposito, improperly granted more than $29.2 million in property value reductions, according to a state auditor investigation. DeCourcy pleaded no contest to five misdemeanor charges. A 180-day day sentence was waived.