Mayor, others could face charges if passed 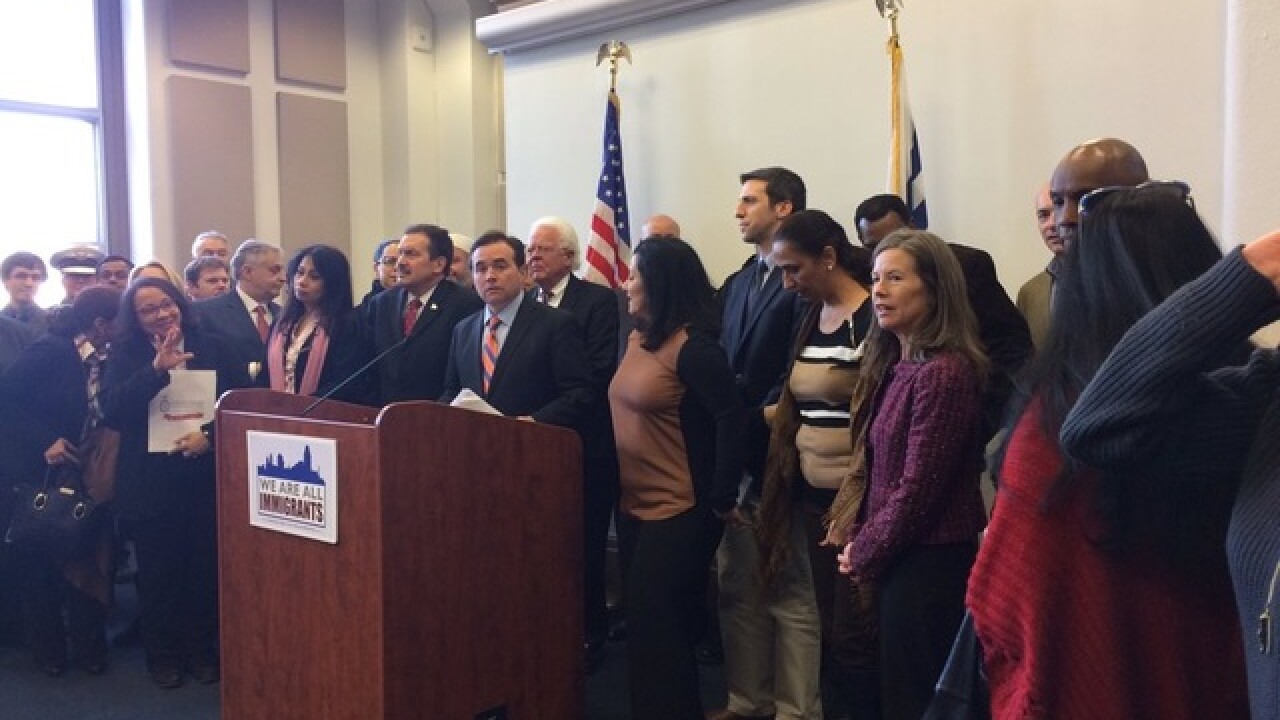 Copyright 2017 Scripps Media, Inc. All rights reserved. This material may not be published, broadcast, rewritten, or redistributed.
Rose-Ann Aragon | WCPO
<p>CINCINNATI. Jan. 30, 2017. A crowd packs a room at City Hall as Mayor John Cranley claims Cincinnati has long been a "sanctuary city."</p>

CINCINNATI -- Cincinnati and state officials would be prohibited from adopting "sanctuary city" protections for undocumented immigrants and held criminally liable for any crimes committed by such immigrants under a proposal headed to Ohio's legislature.

Mandel said in a Monday phone conference that he wants to protect children across the state from undocumented immigrants and that Cranley "is violating federal law and deliberately obstructing immigration enforcement by restricting interaction with federal immigration agencies and shielding illegal aliens from detection."

Cranley called Mandel's claims "a blatant lie" and an attack on the First Amendment.

"We have not and will not violate federal laws," the mayor said in a statement. "Mandel’s proposal is a straw man for his political ambitions, demonizing refugees fleeing oppression in the process. We are standing with refugees and disagreeing with President Trump’s executive orders, which is our First Amendment right to do. Mandel’s attempt to jail people who disagree with the President is an outrageous attack on the First Amendment."

Meanwhile, one of the largest provisions in the Mandel-backed proposal could have city officials who designate their cities as a sanctuary city charged with a fourth-degree felony were a crime to be committed by an undocumented immigrant. The charge carries up to 18 months in prison and a $5,000 fine.

Mandel did not say whether these charges would be implemented retroactively, though it is unlikely, said newly-elected Rep. Candice Keller, R-Middletown, who is co-sponsoring the bill with Mandel.

At the same time, the proposed bill prohibits the establishment of new sanctuary cities, so it’s unclear how exactly officials would be charged if not retroactively.

Civil charges could also be filed against sanctuary cities and their elected officials if a citizen believes a crime was committed against them by an undocumented immigrant residing in a sanctuary city. Damages against a city or an official could be claimed at up to $1 million.

Mandel provided a list of crimes committed by undocumented immigrants as reason for the law, but only one of the seven provided took place in Ohio. It happened in Painesville, a city that aggressively denied it was a sanctuary city after the mentioned crime -- a murder of a 60-year-old woman -- in March last year. According to Cleveland.com, "Painesville police encountered (the suspect) three weeks earlier, but border control agents declined to detain him."

Mandel is running for U.S. Senate and said he'd make the prohibition a priority. His campaign sent out a fundraising email highlighting the legislation a few hours after his state office announced it.

The term "sanctuary city" has no legal definition, but it's often a label used for cities that refuse to turn over individuals to Immigration and Customs Enforcement, or cities that just have welcoming resources or policies in place for immigrants.

The current Cincinnati Police Department policy states that "CPD officers will not enforce immigration laws. However, if Immigration and Customs Enforcement (ICE) officers request assistance from a CPD officer in detaining a subject, the officer will provide assistance with the approval of a supervisor."

The council's resolution indicated plans to not respond to ICE detainer requests and pointed to the Metropolitan Area Religious Coalition of Cincinnati's non-government ID program as examples of Cincinnati's "sanctuary city" practices.

However, Hamilton County Sheriff Jim Neil said he'd continue continue to detain undocumented inmates at the request of federal immigration authorities. Cincinnati has no jail of its own, so its inmates are held at the Downtown jail Neil's office operates.

This report contains prior coverage by WCPO.com's Paula Christian and Amanda Seitz. The Associated Press contributed to this report.