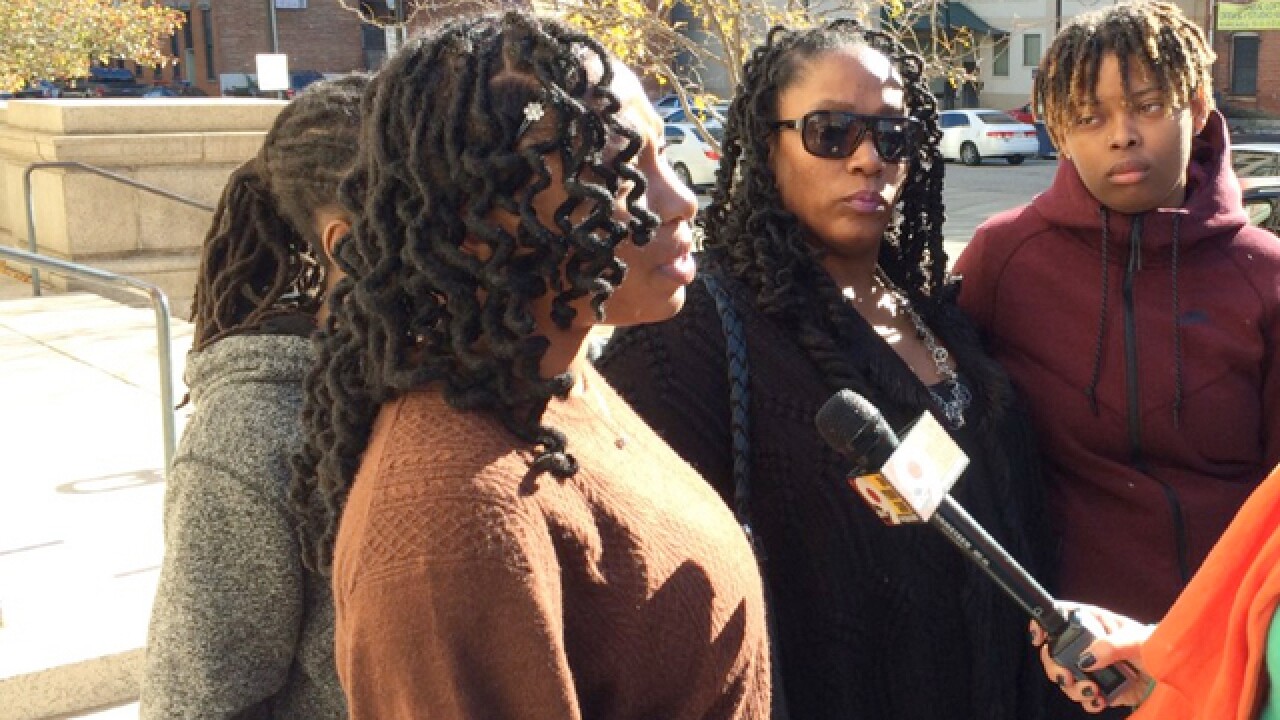 <p>Members of Sam DuBose's family speak to a reporter after the judge ordered a mistrial.</p> CINCINNATI -- Family members of Sam DuBose were disappointed but hopeful after a judge ordered a mistrial in the trial of Ray Tensing Saturday morning.

"Delayed justice doesn't mean no justice at all," DuBose's aunt, Rosalyn Christian said. "It's just delayed for a moment."

Tensing, a former University of Cincinnati police officer who shot and killed DuBose during a traffic stop last year, was charged with murder and voluntary manslaughter.

"People are suffering behind this," Reid said. "We are hurt. Hurt is turning to our strength, and our will to go on and make sure that we get justice. Because we're not giving up."

Reid also said Cincinnati has the opportunity to “lead the way” with this trial.

“This was the opportunity for them to change the pace in the course of history and holding these cops accountable,” Reid said.

In a statement Saturday, Cincinnati NAACP President Robert Richardson said the organization stands with the DuBose family and shares their disappointment.

“Far too often people of color are let down with outcomes that the majority community doesn't have to deal with,” Richardson said in a statement. “We ask everyone to remain peaceful and continue to remain steadfast and vigilant with the expectation of a retrial. We demand accountability and anything less than a conviction is unacceptable and a slap in the face of our community and the Dubose Family.”

"They have been on hold since Sam was killed," he said.

However, the family expects another jury will convict Tensing, Gerhardstein said.

"The family believes that the prosecution put in a strong case," he said. "They think the jury should have gotten it."

Elijah Evans, DuBose's cousin, said family members were appreciative of Prosecutor Joe Deters' work, but were hurt by the mistrial. He said a guilty verdict "would show our justice system was heading in the right direction."

"This is not just for Sam," Evans said. "This is for all the people who have been killed by police officers."

Deters said he would make a decision about whether or not to try the case again by Nov. 28.

"We just try to stay peaceful," Christian said. "That's what we want everyone to do: just stay peaceful. We'll get our day."

"Since this thing first started, they have called for peace and asked for people to remain calm, and they continue to do that and I commend them for that," Stew Mathews said. "I hope people will follow their wishes."

"You can just look into my eyes right now, and see that it really is hurting...to know that my daddy's not coming back,” she said.

But she also took time to remember DuBose, her father.

"He was so funny. He was hilarious. Even when I was trying to be mad at him, I couldn't help but smile because he was so funny," Chyna said.

She continued: "It was just out of nowhere to have him taken away from me."

Moving forward, Deters could retry Tensing on both charges, he could try Tensing on only the lesser charge or seek different charges, or he could drop the case entirely.