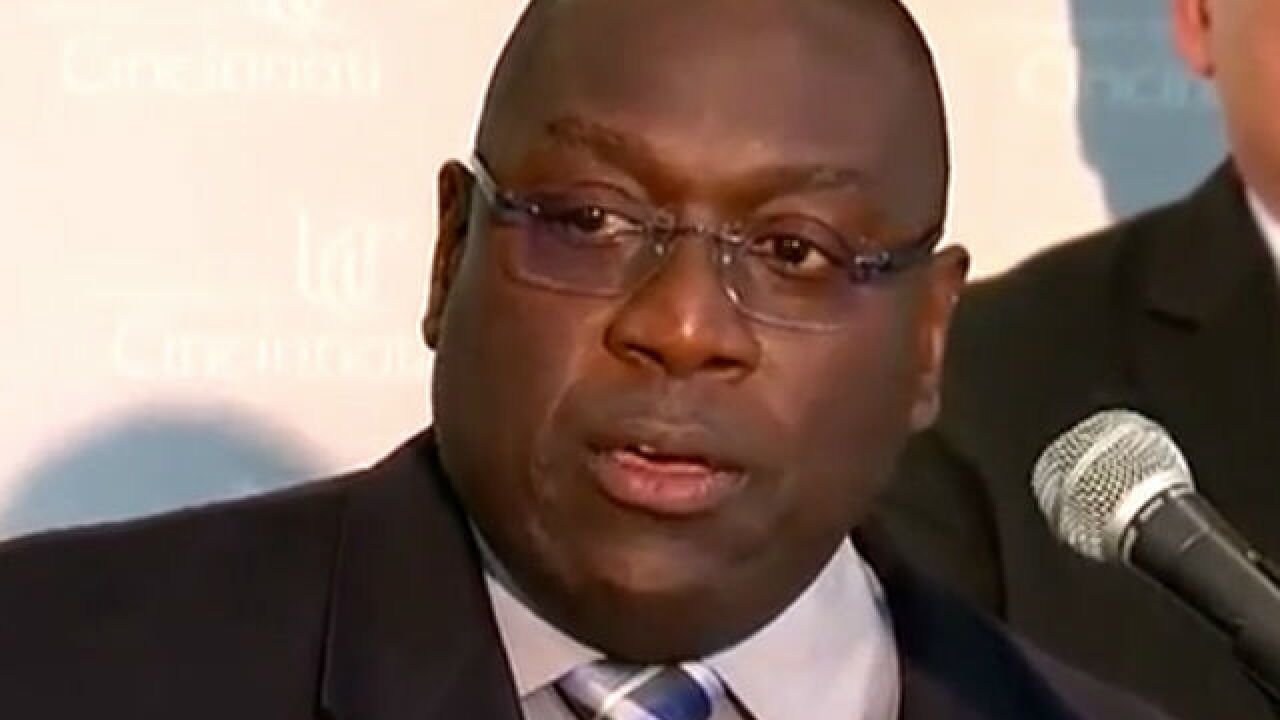 Copyright 2017 Scripps Media, Inc. All rights reserved. This material may not be published, broadcast, rewritten, or redistributed.
<p>Anthony Carter</p>

CINCINNATI – Documents raise questions why the University of Cincinnati took steps to fire its police chief under accusations of misconduct, allowed him to resign, gave him a letter of recommendation and hired him for a new job at a pro-rated annual salary of $137,700.

UC notified Chief Anthony Carter he was being terminated last month after a university-sponsored report claimed he engaged in "inappropriate behavior" while investigating a faculty love triangle among a wife, her husband and the wife's boyfriend, according to documents the university released Friday.

The wife said Carter asked her out three times while he investigated her husband's threat to kill her boyfriend, according to the UC report. Carter also sent the wife 171 texts and called her 11 times over 36 days, the report says.

The documents appear to dispute university Vice President Dr. Robin Engel's Nov. 28 announcement that Carter "voluntarily resigned" on Nov. 23 and raise questions as to why UC assigned him to another job in the Institute of Crime Science if officials were convinced of his misconduct.

The letter from Director of Public Safety James L. Whalen, dated Nov. 22, notified Carter that his employment was "being terminated with cause for violation of University policy."  It was marked received by Carter.

The letter from Johnson on Nov. 28 required Carter to accept the job offer the same day and Carter did so by signing at the bottom.

Engel was informed about accusations against Carter on Sept. 27, according to the UC report, which was submitted on Nov. 20.

UC also released a letter from Carter's attorney disputing the report, claiming Carter's innocence and accusing bias by the UC consultant firm that conducted the investigation of Carter and wrote the report.

UC's report said Carter “improperly injected himself” into the case and said his communications with the female faculty member went “well beyond any investigative imperative.”

Carter's attorney, Brian R. Redden, responded in writing, dated Nov. 27, and said Carter denied asking the wife on a date or acting improperly. Redden said Carter offered her a Bengals game ticket as a friendly gesture because she had complained to him that she had no friends.

"Chief Carter never asked Wife to accompany him to any event in any romantic fashion," Redden wrote.

But the report includes a text conversation in which Carter invites the wife to a play.

Carter: "Do you work late tomorrow? I have a Playhouse ticket that's available."

Wife: "Thank you for the offer but I'm heading to LA for a conference so last-minute scramble going on. Thanks for the thought, though!

Carter: "OK, I told you if I ever had ticket(s) I'd let you know. Safe travels and have some fun."

Carter: "Can I keep asking or would you prefer/rather I not?"

Wife: "Well, you're kind to ask. I actually told [Boyfriend] a few weeks ago that I rather not hang out with anyone right now ..."  (edited for brevity).

Carter: "OK, I only ask because you say you don't get out or have things to do. I never want you to feel uncomfortable ..." (edited for brevity).

Wife: "Thank you. I appreciate that ..." (edited for brevity). "Thank you for the kind words and for checking on me."

Carter: "Well, I won't bug but please call anytime you want ... no date but if you want to grab a bit (sic) or drink or just vent, feel free..." (edited for brevity).

READ the complete text and the entire UC report here or below.

Carter never called the wife or texted her again after that, according to UC's report. That, the report says, highlights "the fact that there was no on-going safety or investigative concern requiring interaction."

Carter's attorney said Carter never asked the wife on a "date,"  and when she used the word once he "immediately corrected that comment" and "made it clear he was not interested in such a relationship."

Redden's letter said the wife had repeatedly told Carter that she had "concerns about her husband's mental and emotional stability" and so Carter gave her his business cell phone to "keep the lines of communications open," as he had in other investigations.

Other accusations in UC's report, submitted Nov. 20,  included that:

Carter's attorney said the wife initiated some of her communication with Carter, and Redden dismissed her husband's claims entirely. Redden called him "an aggrieved husband and faculty member" who has claimed that the university bugged his office, phone and computer.

Carter's attorney said Exiger, the independent firm that investigated Carter for UC, deliberately set out to damage Carter "in retribution for his open criticism of Exiger's consulting work with the university."

"Exiger's conclusions are based on an erroneous assumption by Wife, which supported a conspiratorial allegation by Husband, to satisfy a predetermined result that promotes Exiger's continued role with the University," Redden said.

Exiger is the same company that investigated the operations of the UC police department after Officer Ray Tensing shot and killed Sam DuBose during a traffic stop in 2015. Carter was not employed by UC at the time. He was UC's police chief for 18 months.

Exiger conducted UC's investigation of Carter after it was determined the situation was not a Title IX issue, the university said.

According to Redden’s letter:

Whalen asked Carter to conduct the investigation and to keep it confidential with the deans of the schools where the three parties worked.

Carter gave his report to the deans after 10 days and considered the matter closed.

The wife "regularly reached out to Carter" through the cell phone and Carter was "completely transparent" in providing that information to the Exiger investigator.

Carter only contacted the wife to do same welfare checks he would do in any other investigation, the attorney said.

"As Chief Carter would do with any other member of the UC community, he continued to check on the welfare and mental and emotional health of the impacted witness to make sure that there were no further problems that would require university police intervention," the attomey's letter said.

"Chief Carter has violated no policy, no procedure, and has not behaved inappropriately in any  material way with respect to his investigation."

Carter is one of three finalists for the job of police chief of the City of Fairfield, a city official told WCPO earlier this week.

"Irrespective of the ultimate determination of this complaint by the University, we believe training should be developed and delivered that reiterates the boundaries that must be scrupulously observed between officers and complainants or witnesses,” it said.