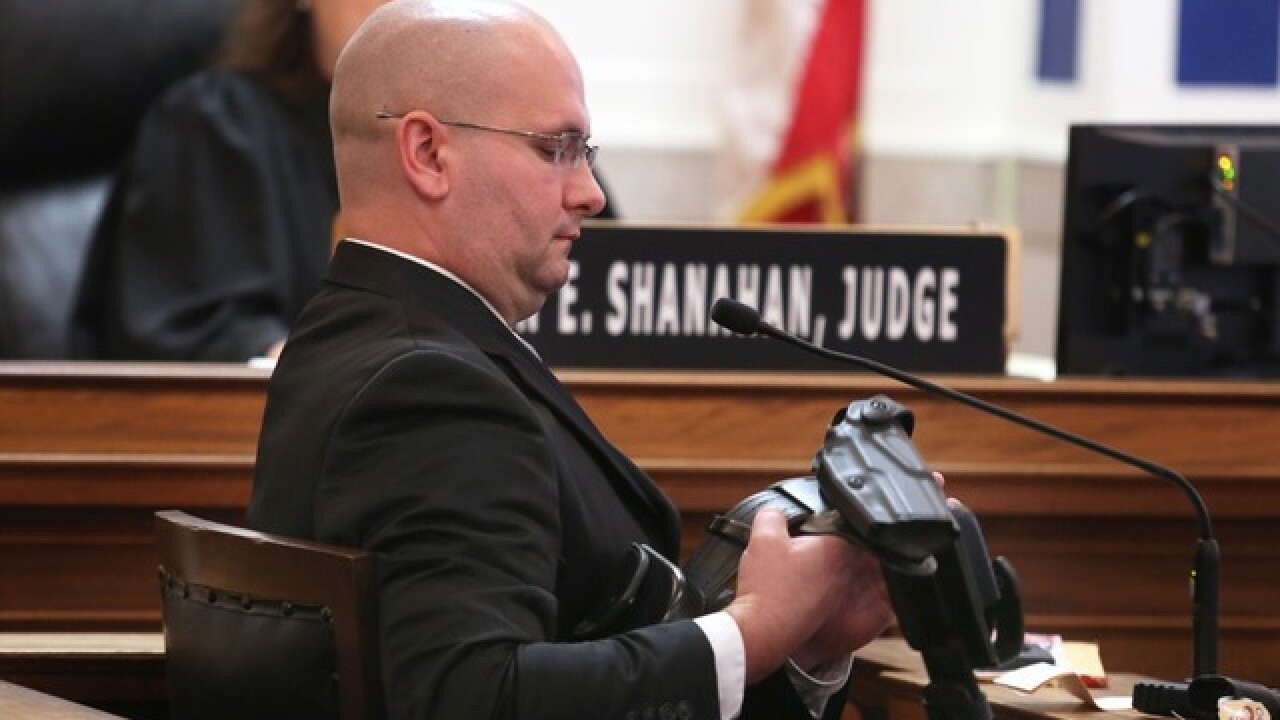 CINCINNATI -- After four hours on the first-day of testimony, the jurors in Ray Tensing's murder trial must have gone home thinking they had seen three different versions of the same one-act play.

Three prosecution witnesses, including two officers who worked with Tensing on the University of Cincinnati police force, David Lindenschmidt and Phil Kidd, seemed to agree on very little. There was one important thing the UC officers did agree on, though -- they said they didn't see Sam DuBose's car drag Tensing.

Tensing's defense claims DuBose started to drive away from a traffic stop in 2015 and dragged Tensing, forcing Tensing to shoot in self-defense.

The prosecution claims Tensing fired at DuBose before the car started moving and Tensing wasn’t dragged at all.

The officers said their views were partially obstructed when they pulled up to the scene just moments before the shooting and they didn't see Tensing fire the fatal shot.

Kidd and Lindenschmidt were the officers who originally backed up Tensing's claim that he was dragged in the UC police incident report. Both officers changed their stories a few days after the shooting, when they had to make sworn statements to Cincinnati Police investigators. At the time, UC put Kidd and Lindenschmidt on paid administrative leave  and started an investigation, but eventually returned them to duty. A grand jury reviewed their cases and did not return any charges.

You can hear Tensing telling Kidd on his body-cam video that DuBose dragged him, and Kidd responding, "Yeah, I saw that." Kidd also told officers at the shooting scene that he saw DuBose drag Tensing.

SEE the edited version of Kidd's video below:

Lindenschmidt's body-cam video shows him repeating Tensing's claim to other officers as they arrived, but Lindenschmidt, an Officer In Training at the time, did not say that he saw it happen.

SEE the edited version of Lindenschmidt's video below:

All of that went unmentioned in front of jurors Wednesday except for two brief exchanges. In cross examination, Tensing's attorney, Stew Mathews, asked why Kidd changed his story from "Yeah, I saw that."

In redirect, Kidd told assistant prosecutor Rick Gibson, "I didn't actually see him dragged. I saw him moving and the car moving."

You might say the prosecution's case doesn't rely on witness testimony anyway, since it has "the video."

Jurors saw the more disturbing unedited version of Tensing's body-cam video, which not only showed the fatal confrontation in Mount Auburn but also DuBose's bloody body slumped on the front seat of his car.

They also saw what was picked up by the other officers' body cameras -- not the shooting, but dramatic footage of them running up the street, guns drawn, as DuBose's car wandered south on Rice until it jumped the curb and hit a utility pole. And more shots inside the bloody car.

Both Mathews and Prosecutor Joe Deters promised that frame-by-frame viewing of the video in court will reveal more details that help their case.

Lindenschmidt and Kidd both gave support to other Tensing claims. Here are some other highlights from the first day of testimony:

>  Lindenschmidt said DuBose's car turned 45 degrees to the left when it pulled away from the stop. He said the car sped off  going "30 mph or faster."  He also said Tensing was knocked 10 feet down the road. Kidd said he couldn't say how fast the car was going. He said Tensing got up probably "10 or 15" feet away  from the spot he was standing when he shot DuBose. Kidd said he did not see Tensing "attached" to the car. Mathews says "attached" when he refers to his claim that DuBose was pressing Tensing's left arm against the door and Tensing couldn't get free.

> Kidd said just the recoil from firing a standard UC service weapon, a Sig Sauer P320 .40-caliber, would not have knocked Tensing to the ground. Deters has said Tensing was knocked down by the kickback from shooting DuBose, not because DuBose dragged him or hit him with the car.

> Lindenschmidt said Tensing violated procedure when he reached into DuBose's car and tried to pull the keys out of the ignition. Kidd said he saw Tensing "lunge" into the car. But Kidd also said he has done that, too.

> Kidd said he would agree that an officer would not be justified in shooting someone at a traffic stop unless the officer thought his life was in danger.

> Both officers said they didn't notice any injuries on Tensing.

Another witness, Alicia Napier,  gave a sometimes tearful account of what she saw when she put her kids in the car parked on Rice Street and DuBose and Tensing pulled up before her. Napier she admitted some of her testimony contradicted the statement she gave police that night. "I was really confused," she said in court.

The last witness of the day was DaShonda Reid, DuBose's long-time girlfriend and the registered owner of the car DuBose was driving. Reid said she and DuBose had three children together and they had gotten engaged two days before the shooting. Reid sneered at Tensing from the witness stand, and when Mathews' mentioned DuBose's "death" on cross examination, she interjected "his murder."

Reid gave abrupt answers to Mathews' questions, especially when he asked who owned the marijuana - between 200 and 1,000 grams, he said  - that police found in the car after the shooting.

"I don't know whose marijuana that was," Reid said. She then asked Judge Megan Shanahan to release her and counsel agreed.

SEE WCPO's complete coverage of the Tensing trial at WCPO.com/TensingTrial.