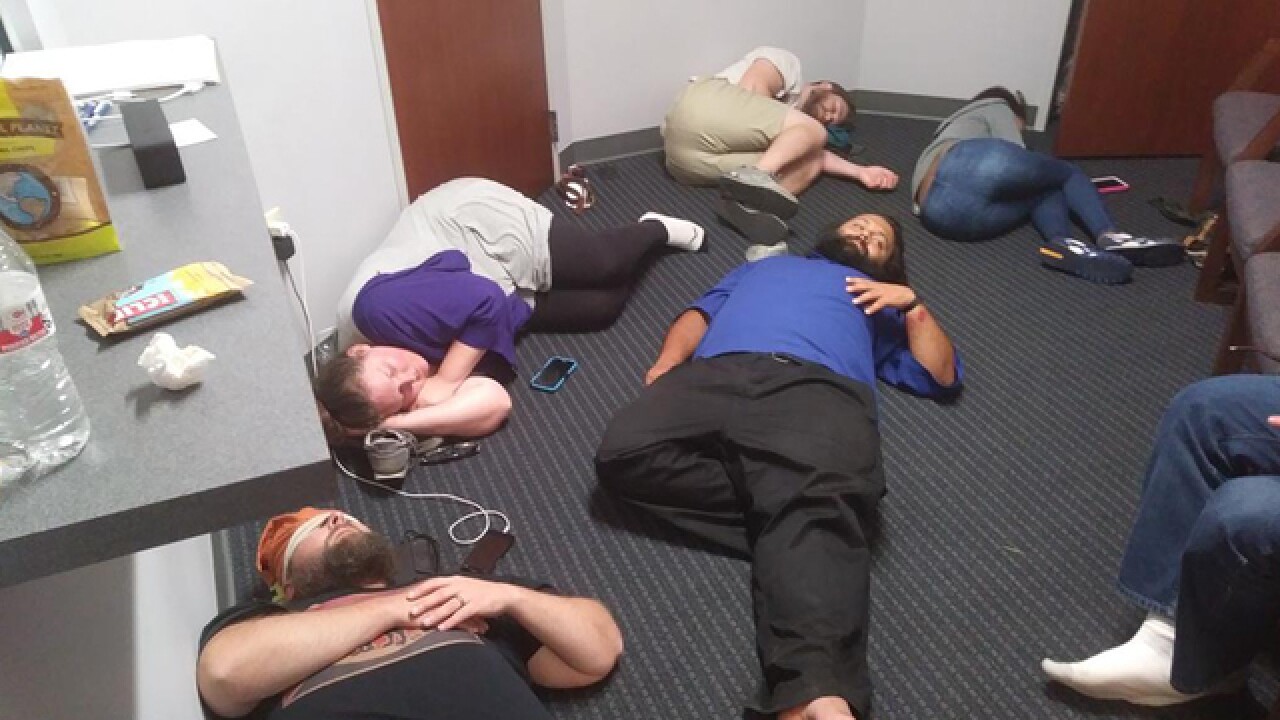 Copyright 2017 Scripps Media, Inc. All rights reserved. This material may not be published, broadcast, rewritten, or redistributed.
<p>Protestors inside Sen. Rob Portman's office.</p>

Protestor Billie Mays told WCPO the demonstrators left Portman's office at 2 p.m. Friday after they had been there since 4 p.m. Thursday.

Listen to the conversation in the video player above.

Scripps Center security locked elevator access to the 34th floor, so Anderson said they had trouble getting support and food. However, a good Samaritan took food to the 35th floor, walked down one flight of stairs and banged on the door until a security guard answered. She asked that guard to deliver the food to the remaining protestors before walking down 34 flights of stairs to exit the building.

Anderson has a rare, double-recessive genetic condition called spinal muscular atrophy, which is similar to ALS (of ice bucket challenge fame). She called her entire life a pre-existing condition since she has been dependent upon a motorized chair for mobility from the age of 5.

Portman, an opponent of the Affordable Care Act, had expressed mixed feelings about the Senate Republican's health care bill but did not deliver a public ‘no' until after Senate Majority Leader Mitch McConnell pulled it from consideration, pending party-pleasing improvements.

"Isn't that like saying you won't go to a dance when the dance has already been canceled?" wrote one Cleveland news outlet.

Medicaid pays 100 percent of Anderson's care through an Ohio Individual Options waiver. Activists said one out of four Ohioans are enrolled in Medicaid, many of them people with disabilities, older Americans and children.

“The problem is that I don't think that the congressmen who are pushing this through have really understood the changes that it's going to bring about,” Rixe said. “It might end up causing more harm than good.”

He said the bill wouldn’t do anything to help Americans, especially veterans who may need extra health care services.

“When we join the military, we join for so many different reasons, but the expectation is once we're done we'll have the promises made to us honored,” Rixe said.

Zachary Haines, a member of the Hamilton County GOP Party, said he wants to see a change in health care.

“I think we're going to come up with a solution, and I’m in favor of having some bipartisan approach to this issue I think,” he said.

The bill introduced in the Senate would reduce Medicaid by almost $800 billion and provide massive tax cuts for the wealthiest Americans. The protestors said they won't leave Portman's office until they are arrested or until Portman states that he will vote no on this bill or any other like it.

"We are sitting in to demand that Portman vote no not only on this (Better Care Reconciliation Act) bill, but any policy that cuts Medicaid, discriminates against those with preexisting conditions, increases the number of people without insurance or defunds Planned Parenthood," activists said in a statement to the media. "Doing otherwise is morally reprehensible."

Activists such as David Lynch want Portman to take a stronger stance against the bill and any future Republican legislation meant to "repeal and replace" the ACA, also known as Obamacare.

"We think it’s certainly not outside the realm of possibility that Sen. Portman could come back and vote yes on a revised bill," Lynch said.

Mic reported that similar protests were taking place in other Republican legislators' offices across the country.

"We care about people and we care about the 22 million that could lose health care with this bill," Billie Mays, who streamed the protest on Facebook Live, said. "I know more people than I can count that will be personally affected."

Mays, Lynch and their comrades also hope to speak with Portman face-to-face, either in his office or at a town hall. Although Portman has made recent appearances with organizations such as Adams Recovery Center for Women and continued to hold "constituent coffees" in Washington, he has not hosted a large public event in his home district in more than a month.

Demonstrators went as far as holding one without him in February, addressing their grievances to a cardboard cutout of his face.

"I want to be sure (my meetings with constituents) are constructive sessions," Portman told WCPO's sister station in Cleveland in February. "This incivility on both sides, people yelling at each other, is not going to get us to a point where we can make progress on those issues."

Mays said she and her fellow protesters planned to stay until either Portman responded to them or authorities removed them from the building.

"They are all welcome to come to our offices to discuss any topic," Portman spokesperson Emily Benavides said in a statement. "Rob has been hearing from people on both sides of the issue and will continue to be an independent voice for Ohio working to fix our broken health care system and ensure that people battling addiction have access to the treatment they need."

Another group of activists was scheduled to deliver a petition to Portman's staff and voice opposition to Republicans' health care plan at 2 p.m. Friday.