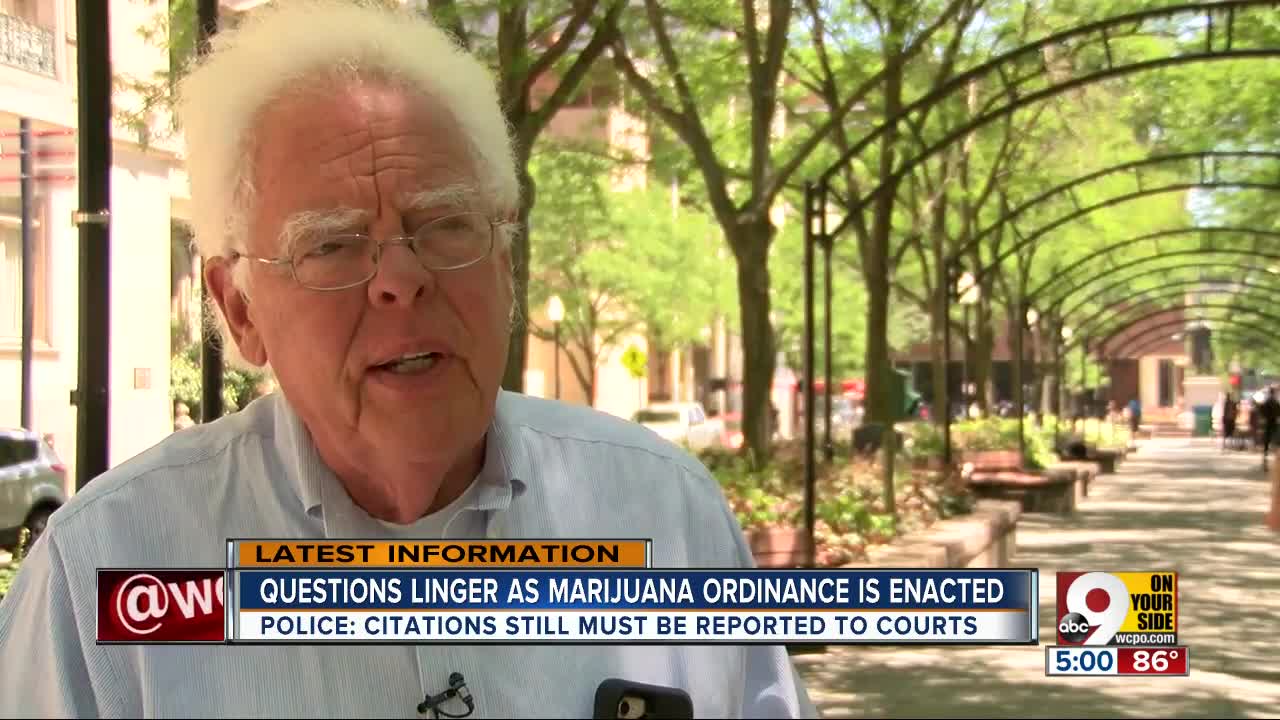 As the clock struck midnight Friday morning, Cincinnati's marijuana decriminalization ordinance officially went into effect. However, as the already-passed ordinance rolls into effect, many aspects of how to legally interpret the verbiage and enforcement of the bill are still unclear.

However, as the already-passed ordinance rolls into effect, many aspects of how to legally interpret the verbiage and enforcement of the bill are still unclear.

One detail within the ordinance's verbiage that remains unclear is how marijuana-related offenses decriminalized by the bill will be kept off a person's criminal record.

A statement WCPO received from the City of Cincinnati states: "An offense cited under this section is not required by the City to be reported as a criminal conviction."

The ordinance itself states that “arrest or conviction for a minor misdemeanor violation of this section does not constitute a criminal record and need not be reported by the person so arrested or convicted in response to any inquiries contained in any application for employment, license, or other right or privilege, or made in connection with the person’s appearance as a witness.”

However, Cincinnati police said they still need to report citations to the courts.

"Under state law, my office is required to accurately record all information we receive from law enforcement, the prosecutor's office and the court," Hamilton County clerk of courts Aftab Pureval said in a statement.

Pureval said his office will seek council from the Hamilton County prosecutor's office for an official legal opinion.

In the meantime, Cincinnati police still plan to confiscate marijuana discovered in possession, and officers have been told to issue warning citations to people found in possession of less than 100 grams of marijuana. These citations come with a zero dollar fine and won't land anyone in jail; however, it's still unclear as to whether they will go on a person's criminal record.

A statement WCPO received from the City of Cincinnati states: "An offense cited under this section is not required by the City to be reported as a criminal conviction."

"There are a lot of things that have to be worked out as the days and weeks of enforcement go forward," said David Mann, Cincinnati city council member. Mann voted against the ordinance originally, out of concern that it didn't specify an age limit.

Hamilton County Sheriff's deputies are under no obligation to uphold this ordinance, and plan to continue to follow Ohio state law, which incurs a misdemeanor charge and a fine for 100 grams or less of marijuana. The ordinance itself only affects the City of Cincinnati, so local municipalities will see no change in policy under this.

“I think part of what we’re seeing is problems are created if a jurisdiction within a large state acts on its own," said Mann. "There should be a statewide solution...“Doing it jurisdiction by jurisdiction, it may make some people feel good. But, I think it’s creating more confusion than our citizens ought to live with.”

He added that he is concerned that police have more important things to deal with, like the recent spike in fatal shootings during the summer.