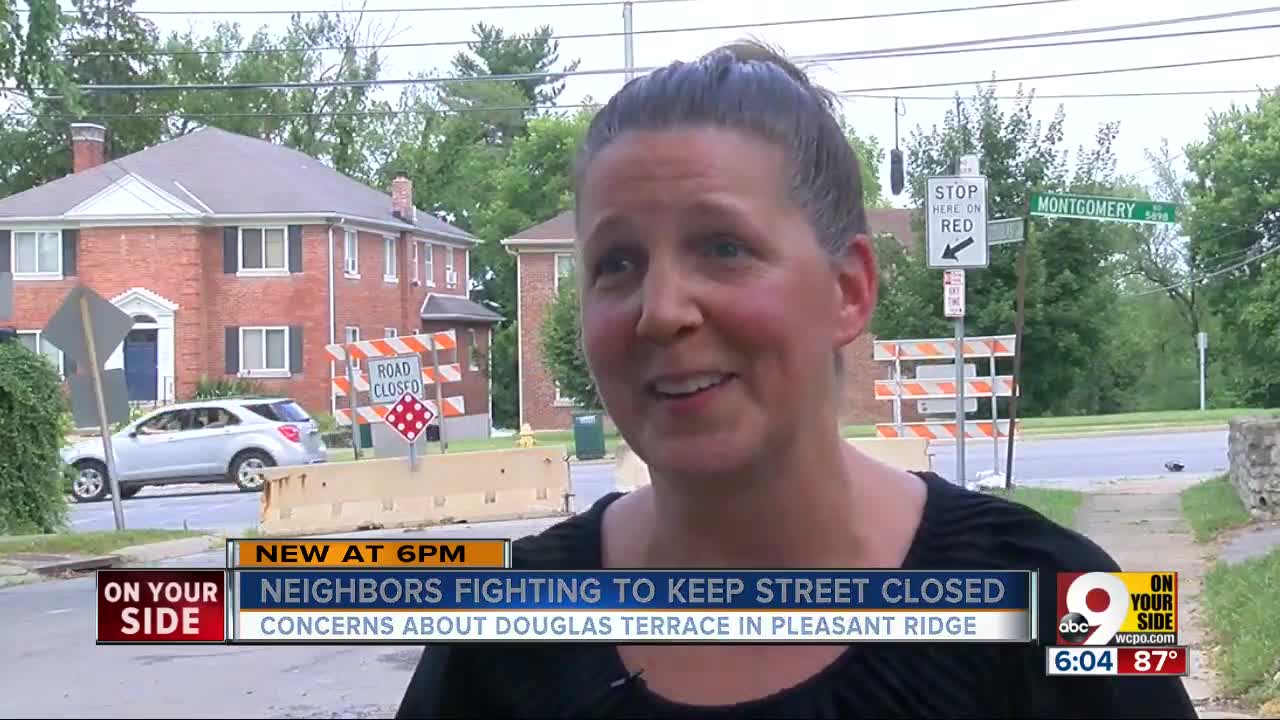 Up until three months ago, Douglas Terrace was a common shortcut for drivers trying to avoid the busy intersection at Montgomery Road and Ridge Avenue.

CINCINNATI — Three months ago, Dick Stadelmaier said he wouldn’t have been caught taking a walk with his daughter outside their Douglas Terrace home.

“We haven’t had nearly as much thru traffic so we’re able to use the front yard now,” he said.

Gwen Roth said she felt the same way about walking her dog.

“I used to walk my dog on one of the side streets because there was so much traffic on this street,” she said. “It would take me several minutes to cross this street especially in the morning when it got really busy.”

Fast forward a few months. Stadelmaier and Roth said they feel safer walking along Douglas Terrace ever since the Department of Transportation and Engineering blocked off Douglas Terrace at Montgomery Road — a three-month “test” closure that began with residents signing petitions.

Up until three months ago, Douglas Terrace was a common shortcut for drivers trying to avoid the busy intersection at Montgomery Road and Ridge Avenue.

“That pole has been struck by a vehicle,” Stadelmaier said, “and I’ve had two vehicles end up on my front yard as well.”

Roth said the amount of traffic and the number of accidents prompted the residents of Douglas Terrace to take action. Two years ago, they requested speed bumps.

“Slowed some people. Didn’t slow everybody,” she said.

Roth and Stadelmaier applaud the temporary closure with traffic limited to drivers who live on Douglas Terrace and other side streets. But the three-month testing period is up, and they’d like the closure to remain in effect permanently.

“They are also following their own policy and have sent out postcards to the residents,” she said. “They’re telling us they need 75% positive feedback to close it permanently.”

So Roth is going door to door, asking her fellow residents to send back their postcards.

“Please, please, please keep it the same,” Roth said. “It’s been significantly better for us.”

Farmer Low said the delay caused by the closure may slow down drivers by about two minutes based on testing.

Cincinnati City Council’s Law and Public Safety Committee is expected to discuss the matter. No date has been set.