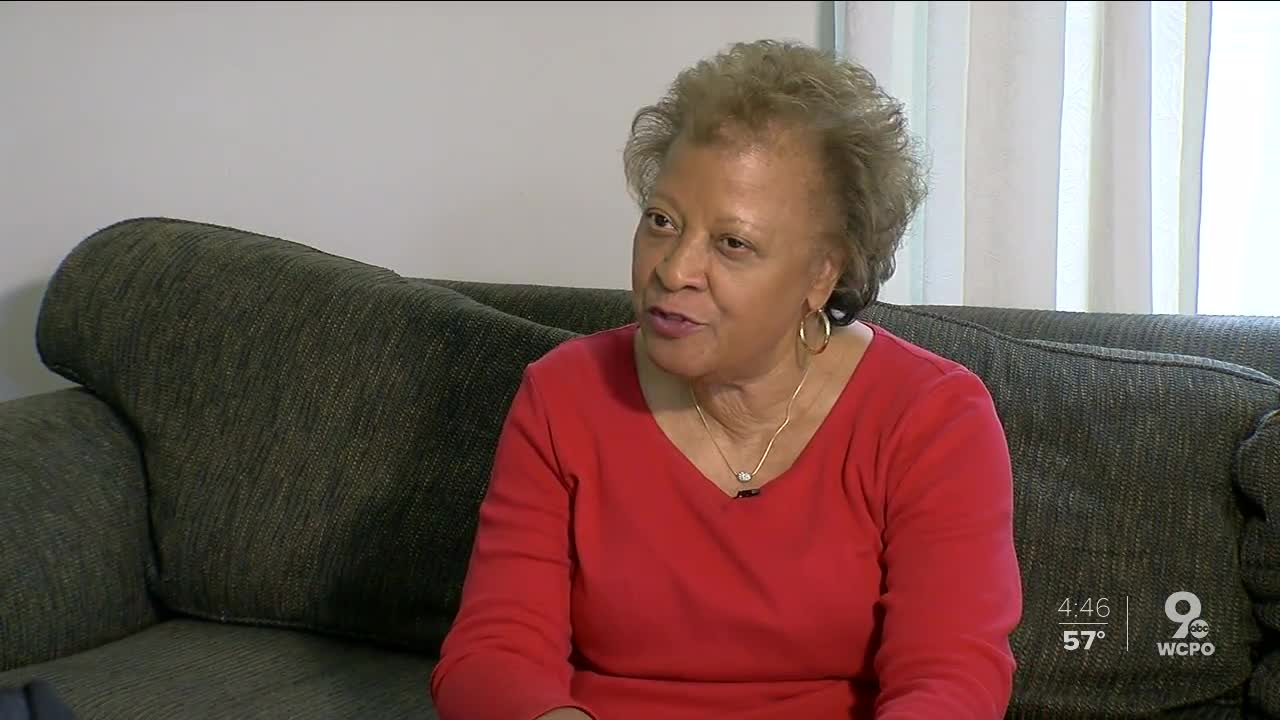 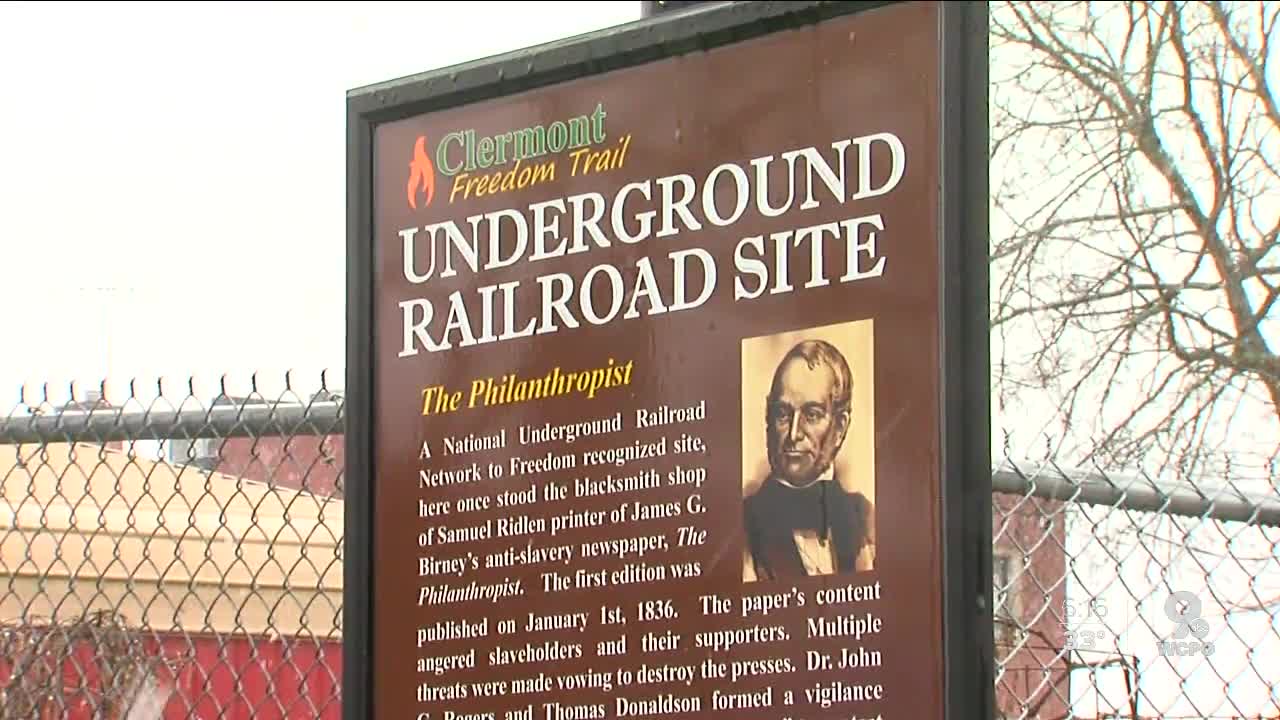 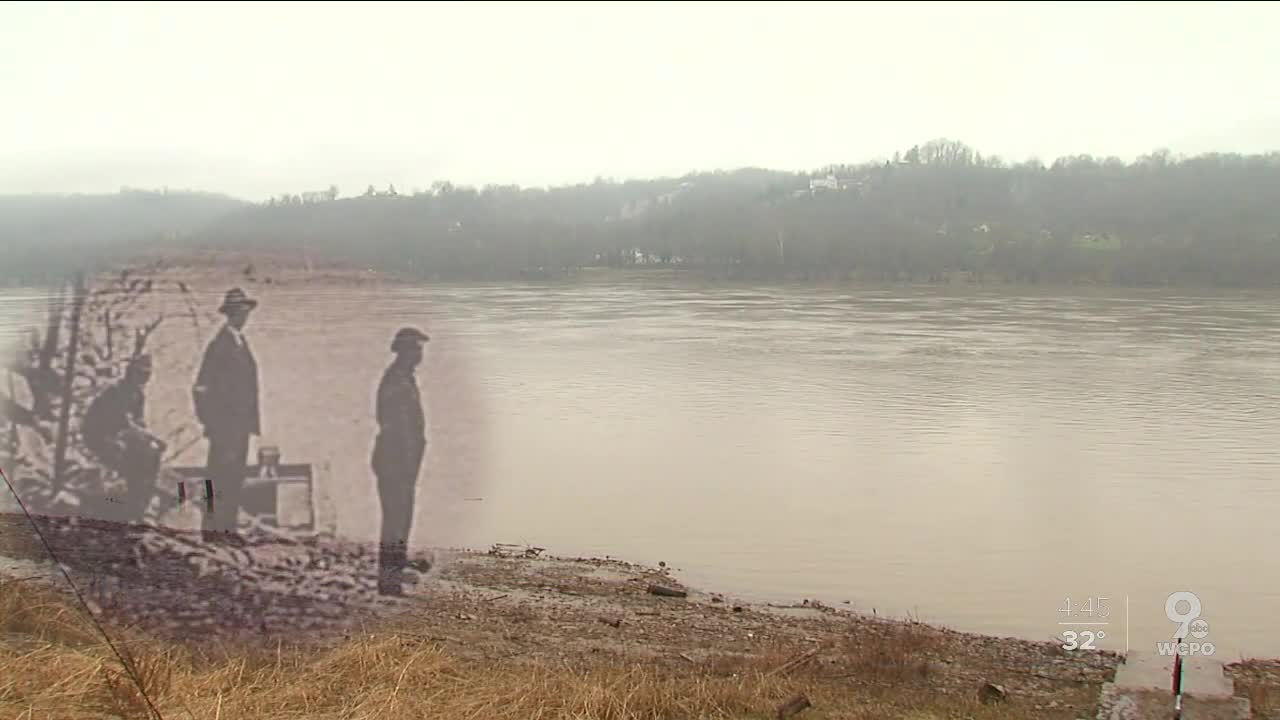 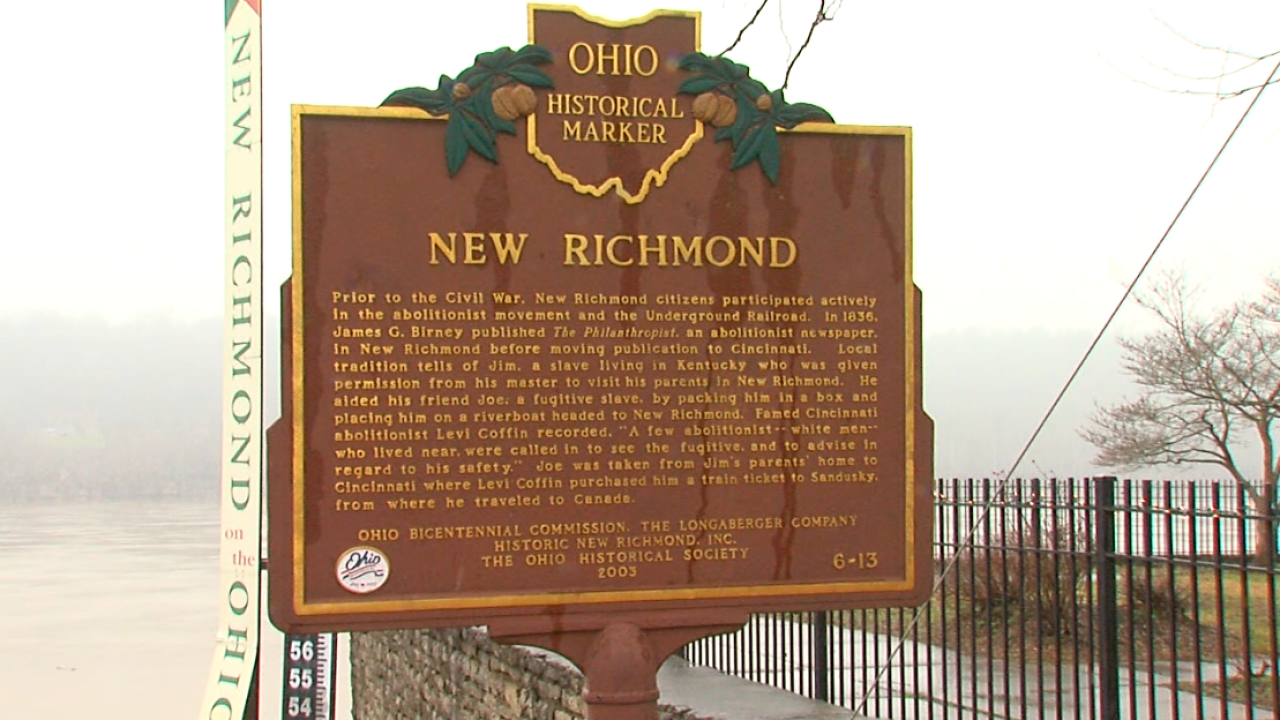 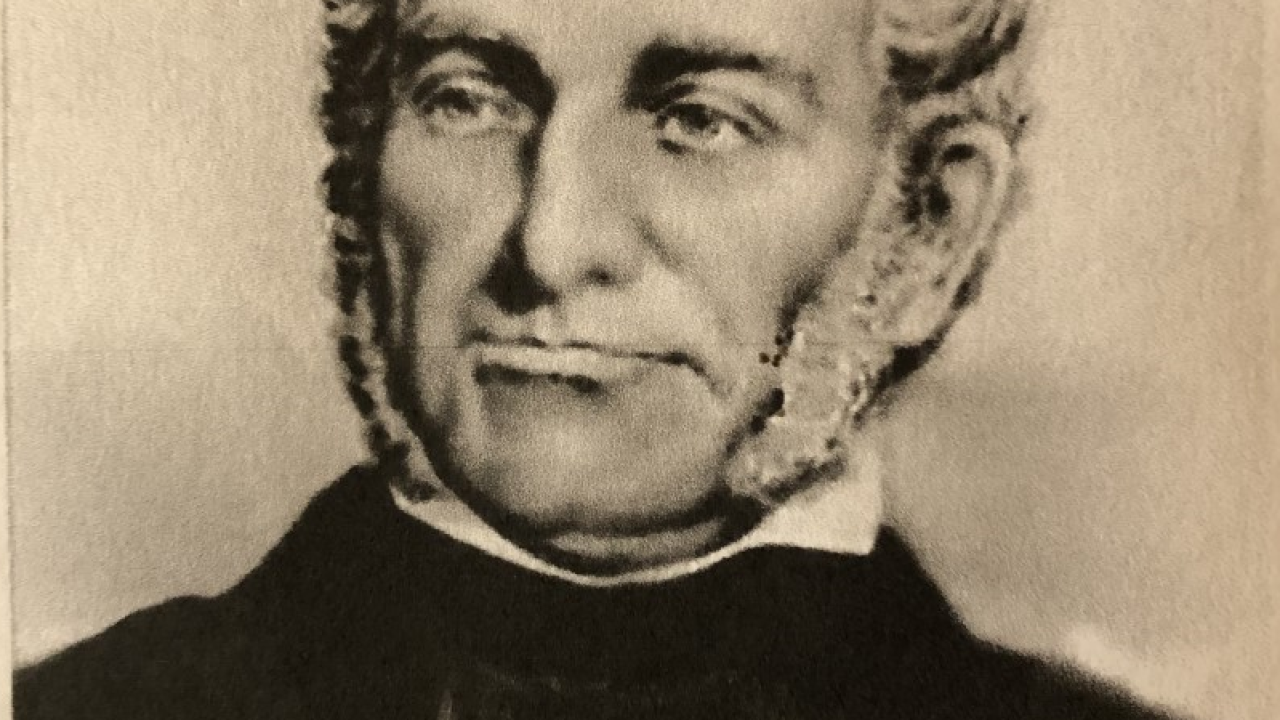 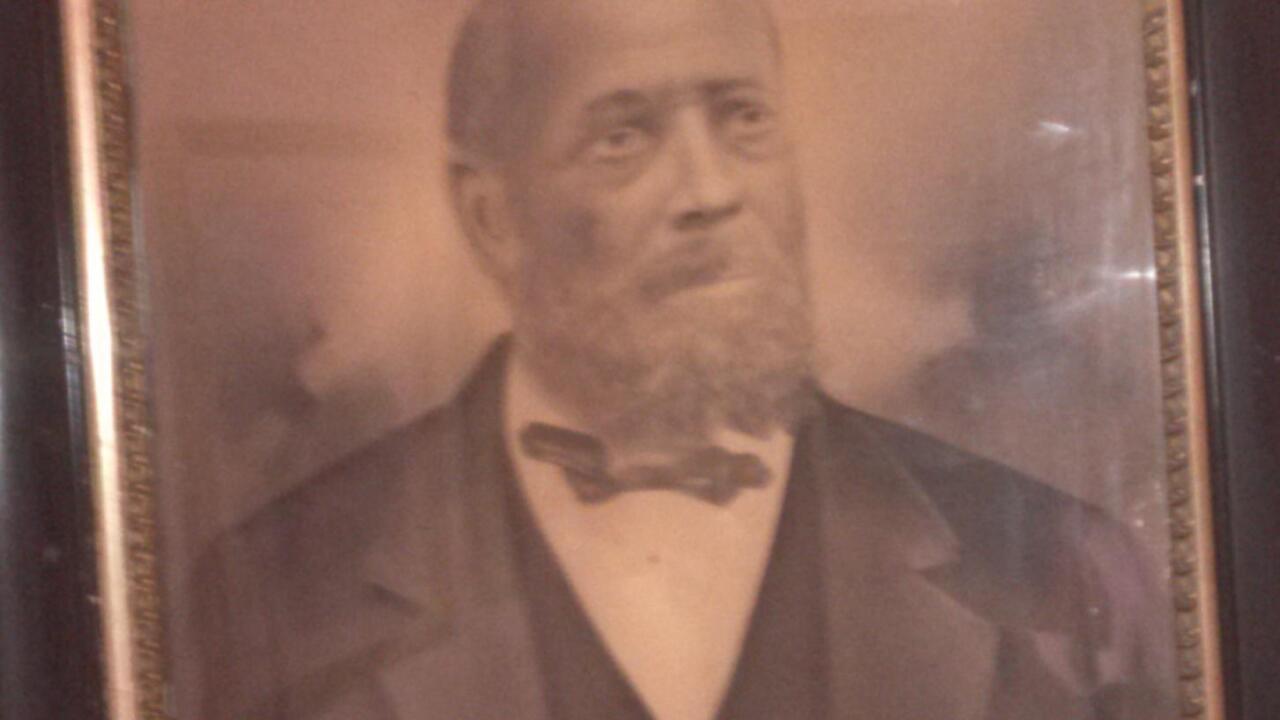 There aren't many people who can trace their family history in the same town back 170 years. But Mary Allen can.

She lives in New Richmond, where she is not only a member of the village council, but she is the great-great granddaughter of successful African American businessman Howell Boone and his wife, Aley. They also lived in the neighborhood.

"Even though he was a slave, he knew he was treated a little differently, and when he was an adult he was given his freedom and so he came here," she said. That was in the 1850s, before the Civil War, when Boone owned a livery and grocery store on what became known as Boone's Corner.

New Richmond was front and center in the abolitionist movement of the 1800s. The village is home to multiple sites with a connection to the Underground Railroad.

Many of those sites have markers placed by either the state of Ohio, Clermont County or the National Park Service as part of its National Underground Railroad Network to Freedom. Two locations have that designation: the location of the offices for James Birney's, The Philanthropist, an abolitionist newspaper, and the entire New Richmond riverfront; the location was the scene of several documented slave escapes.

"I believe that this little village has every bit of the Underground Railroad history that other river towns that are a little more notorious for it have," said Greg Roberts, New Richmond's village administrator and local historian.

One story retold on an Ohio historical marker along the riverfront is about a slave named Jim from Kentucky who was given permission to visit his parents in New Richmond. But, Jim's travel was unconventional. He was packed in a crate carried by his friend Joe for the riverboat ride across the Ohio River. When they arrived in New Richmond, a well-known abolitionist was there to assist them. Lee Coffin and other abolitionists helped Jim get safely to Cincinnati and purchased a train ticket for him to travel to Sandusky. From there, it is believed Jim made it to Canada.

Meanwhile, the strong abolitionist sentiments are part of the reason James Birney went to New Richmond to launch The Philanthropist. With financial assistance from people like New Richmond physician Dr. John Rogers (also known for delivering President Ulysses S. Grant), village residents began strategizing about how to protect the newspaper.

“He was part of a group called the Chieftains of Liberty and this was a group of citizens, call them vigilantes, but these were vigilantes on the right side,” Roberts said.

They encircled the blacksmith shop where the newspaper was beihg published every night wtih torches and guns in order to protect it, said Bob Lees, a New Richmond native and owner of the Front Street Cafe.

"There were numerous threats for its demise," Lees said.

Eventually, Birney moved the newspaper to Cincinnati, because it was a much larger city with more financial backing. But the paper touched off a violent backlash.

"It was promptly attacked by a pro-slavery mob," Roberts said. "The typeset thrown in the Ohio River. And, there was basically a riot where many people were killed.”

Despite the setback, the paper resumed publishing.

Meanwhile, African Americans continued to make their way to New Richmond by the hundreds. During the village's bicentennial in 2014, Allen did a lot of research on the African American heritage of the area. She studied about 60 families, including her own.

“My parents live here, and my brothers and sisters and I were raised here," Allen said. "There’s another four families that had decedents that came here in the 1850s who still live here."

Between about 1870 and 1900, there were 100 or so African American families that amounted to close to 20 percent of the population, Allen said.

In 1857, Allen's great-great grandfather was one of more than 20 influential African American men in New Richmond who formed a group called the Union Association for the Advancement of the colored men of New Richmond.

“Information suggests they predated the Niagara movement and the NAACP,” said Allen. “They created the AME church and Baptist church. They were like a savings and loan to the members.”

Allen said they also offered support to black families around New Richmond. She describes New Richmond as a close-knit community -- for blacks and whites -- with a strong economy at that time.

“We had a foundry and we had the boats," she said. "We used to make boats. But, we were also a steamboat terminus. So, there would be work for people."

But much of that changed in the early 1900s, as many African Americans moved away to take industrial jobs.

“It’s kind of interesting that 150 years ago, 200 years ago, there was this diversity and people were interacting,” Allen said.

Roberts agreed that a look at the past might offer us some insight today.