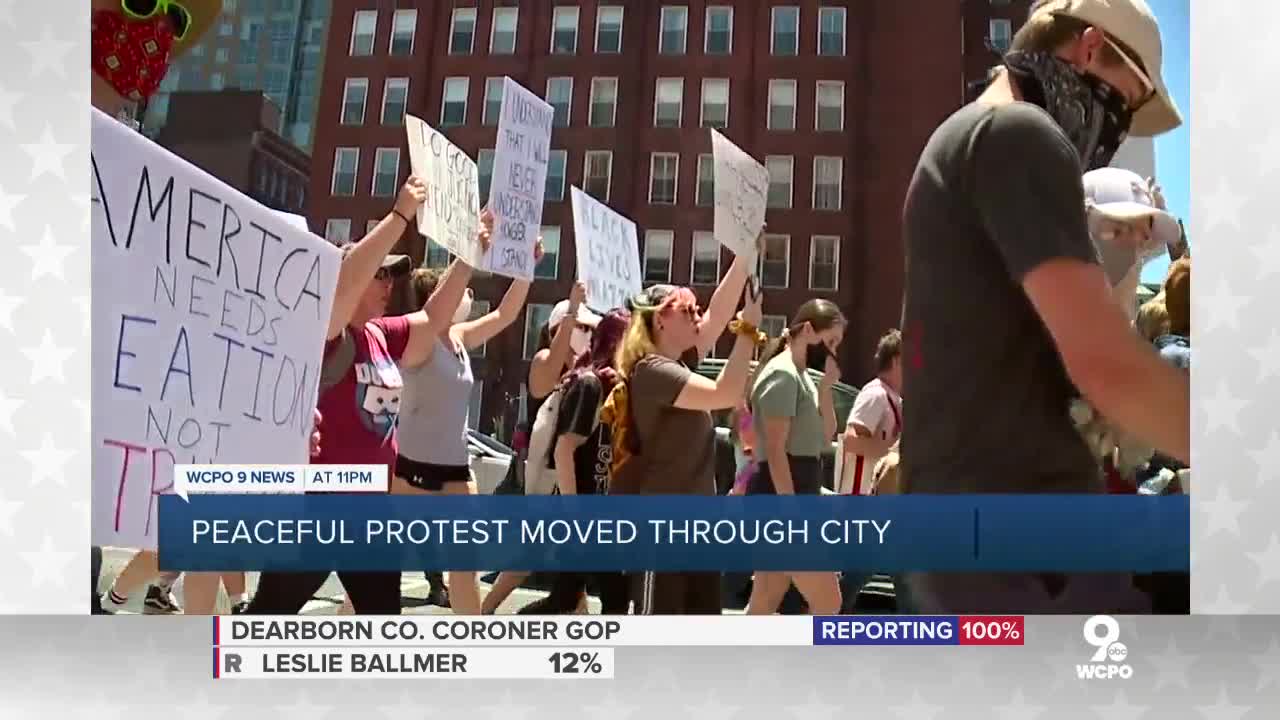 Protests spread from Downtown Cincinnati to West Chester Township and Madeira Tuesday night as the suburbs responded with concern and compassion and participants avoided the 8 p.m. city-wide curfew. 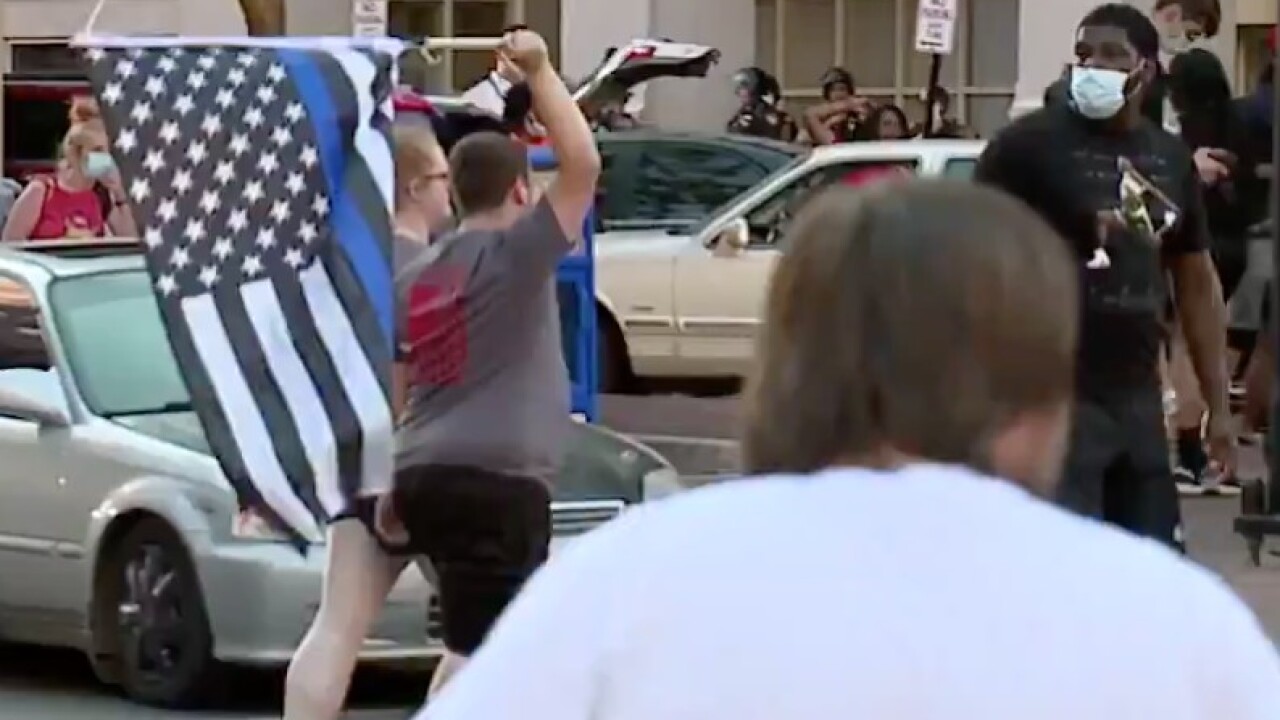 CINCINNATI — Except for what happened to the man waving a "Thin Blue Line" flag, Tuesday was by far the most peaceful day of five days of protests in Downtown and Over-the-Rhine.

A man twice his size slugged the flag waver in the face as he walked in the street past the Hamilton County Courthouse.

It happened in broad daylight and was caught on video.

Here is the video of a protester throwing a thin blue line flag into the street and punching the man who was walking with at today's Cincinnati #GeorgeFloydProtests @WCPO https://t.co/uoj6I2bZ5N pic.twitter.com/uLyoY8CZxz

Police Chief Eliot Isaac reported 17 arrests Tuesday - 10 for breaking curfew. That's a fraction of the 307 Sunday night and overnight into Monday morning, and the 119 Monday night. Most have been curfew violations, but some face assault, arson and weapon charges.

Police and city leaders have blamed a small group of people for causing problems associated with protests, usually after dark. Some protesters, though, complain that it’s the police who are too rough on them.

Outside City Hall, Dominique Harper and Tashawna Bax took the opportunity Tuesday afternoon to engage Assistant Police Chief Paul Neudigate in a conversation while a crowd blocked traffic for 90 minutes.

“We obviously feel how we feel. We’re going to be out here every day until we get things done,” said Harper. “But we would actually like them to not be so aggressive when we’re trying to get our point across. They’re bringing SWAT trucks in.”

“The violence directed toward the police, the damage, the rioting and the looting that we had Friday, it makes it very hard for us to find that common ground,” Neudigate said. “So what I was offering is an olive branch: ‘Let’s have that discussion.’”

“I think once we had that conversation with him we may see a change. He’s hoping for change,” Box said. “ I believe him. I don’t believe that he’s trying to blow smoke.”

Another frustrated protester said she doesn’t think most people understand that they’re not just protesting George Floyd’s death at the hands of Minneapolis police, but also similar police killings in Cincinnati over the years, police brutality in general and what they see as systemic racism everywhere.

"It's hard because it feels like we've been doing this same thing - these same protests over and over again for years on end - and we've been ignored," said Monica Ware.

Tuesday’s march started at the Hamilton County Courthouse around 1 p.m. and moved to Washington Park and City Hall before the organized portion ended around 4:30. Some protesters marched back to the courthouse and continued peacefully demonstrating right up until the 8 p.m. city-wide curfew.

Tensions did return to the courthouse just before curfew when a SWAT vehicle arrived and deputies in tactical gear entered the building. But nothing appeared to come from it.

As 8 o'clock neared, protest leaders pleaded with the crowd to go home and they dispersed.

At that point, it didn't appear that police would be activated to clear the streets as they had been the past two nights. WCPO 9's Josh Bazan said he saw one person arrested at Court and Walnut streets.

Protesters plan to be back Wednesday afternoon at 1 o'clock.