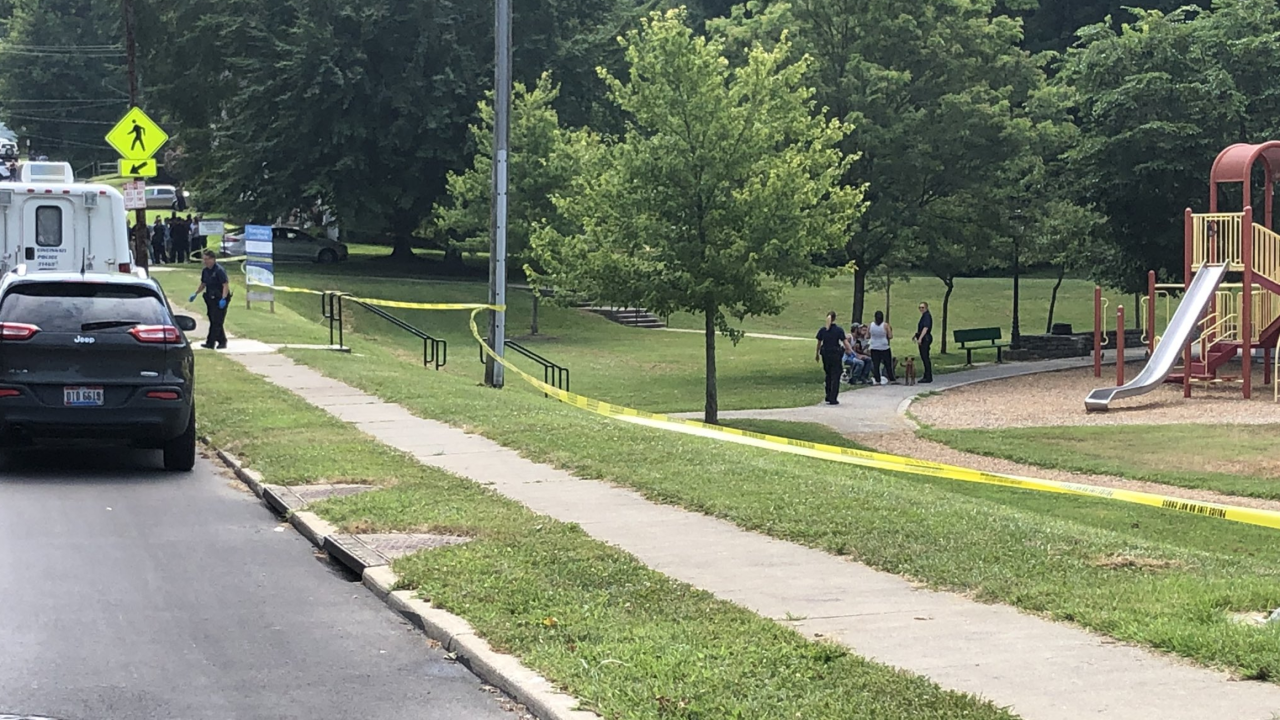 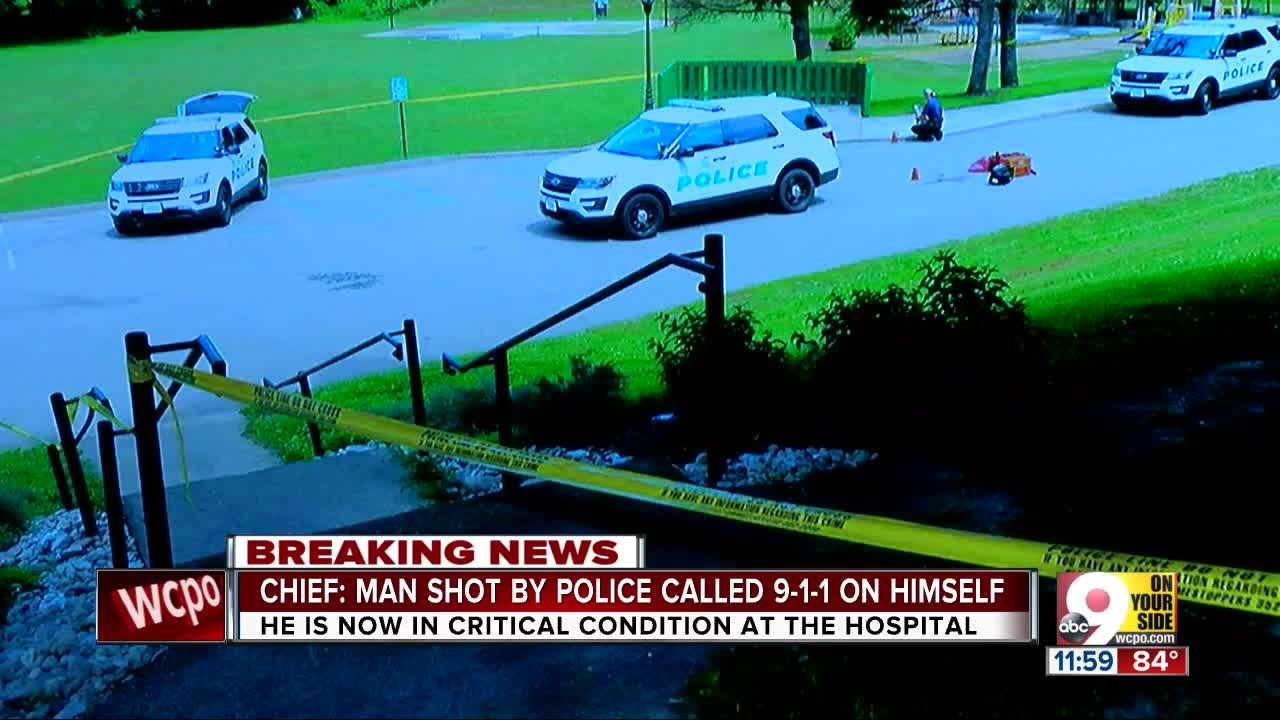 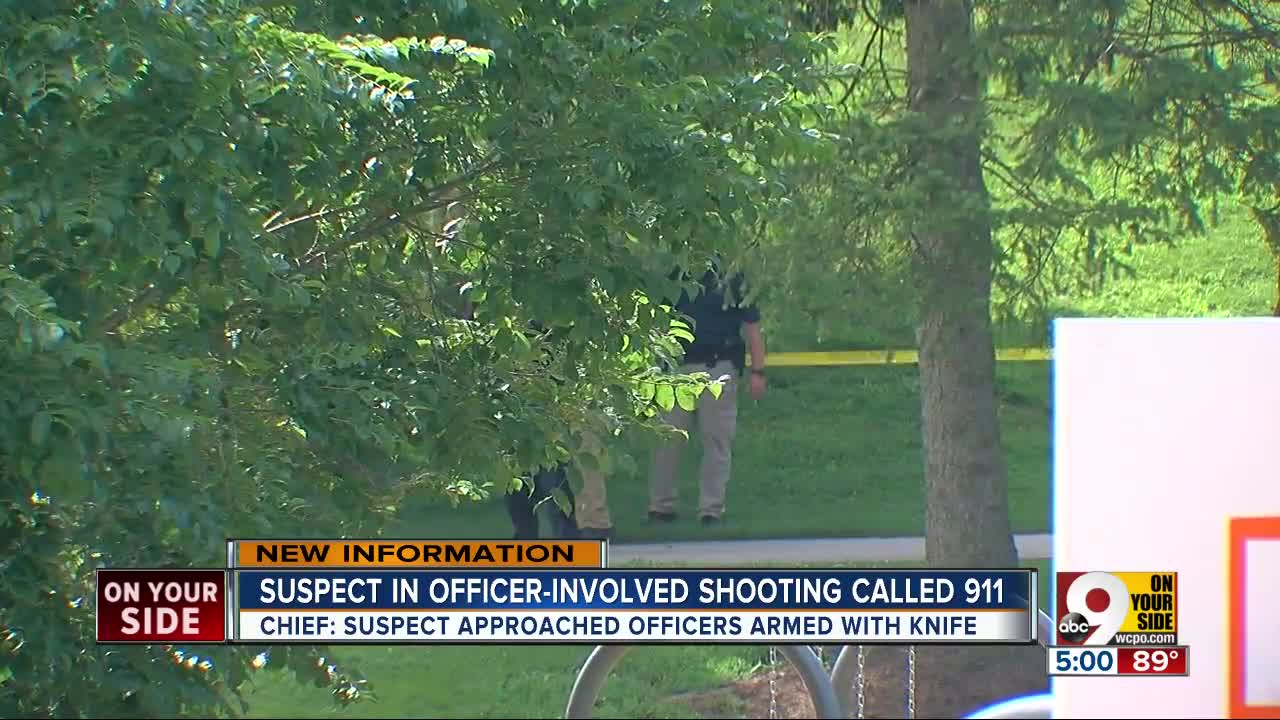 CINCINNATI -- After a day to review the evidence, the police chief and FOP president said a 25-year veteran officer was justified in shooting a man wielding a large knife in Bramble Park Thursday morning.

“I can’t speak to his state of mind or his mindset, but he was very clearly intent on engaging the officers,” Chief Eliot Isaac said at a news briefing Friday.

The suspect in the Madisonville officer-involved shooting called 911, gave a description of himself and approached two Cincinnati police officers with a knife when they arrived on scene, Isaac said.

Devin Johnson, 23, called 911 about 10:21 a.m. Thursday and said a man in the park had a knife and was "acting wild and going crazy,” the chief said. In the call, Johnson described the clothes he was wearing: An orange shirt and khaki pants.

When officers Al Brown and Kevin Brown responded to the park, Johnson came down the steps to the parking lot holding a 11-inch butcher knife with a 7-inch blade, Isaac said. Both officers told Johnson to drop the knife several times, Issac said, but Johnson continued to walk toward them.

According to Isaac, the officers tried to move backward and away from Johnson, but as Johnson got closer, Al Brown shot Johnson three times. The chief estimated Johnson was less than 20 feet away from the officers at the time of the shooting.

Kevin Brown, also a 25-year veteran with CPD, kicked the knife away from Johnson and then gave Johnson chest compressions until first responders arrived.

“They responded to their training and from what I’m able to determine at this point they are very much within the guidelines,” Isaac said.

Johnson's condition is "critical but stable," Isaac said. He underwent surgery Thursday at University of Cincinnati Medical Center. The officers were not injured.

“The mental status of somebody doesn’t come to mind with a police officer when you’re being attacked," Hils said. "Only surviving comes to mind."

Johnson has been charged felonious assault and aggravated menacing, according to court documents. Johnson had no prior criminal record.

While Isaac and Hils had their say Friday, several official investigations are underway.

CPD is conducting an internal investigation, and Hamilton County Prosecutor Joe Deters is expected to release his review on Monday. Body camera footage from the incident could be released at that time.

Both officers were placed on seven-day administrative leave as is customary in this type of situation.

It was later determined the 911 caller was describing himself, giving his name and phone number. The caller has been identified as Devin Johnson, male 23 years of age. The 911 call made by Mr. Johnson. pic.twitter.com/bW4yRNH5A6

Meanwhile, Isaac asked the community to keep Johnson and the two officers in their thoughts.

“This is a good family. I am very sorry that this has happened to them,” the chief said.

This was the first officer-involved shooting in Cincinnati since September 2018 when a gunman opened fire at the Fifth Third Center on Fountain Square.