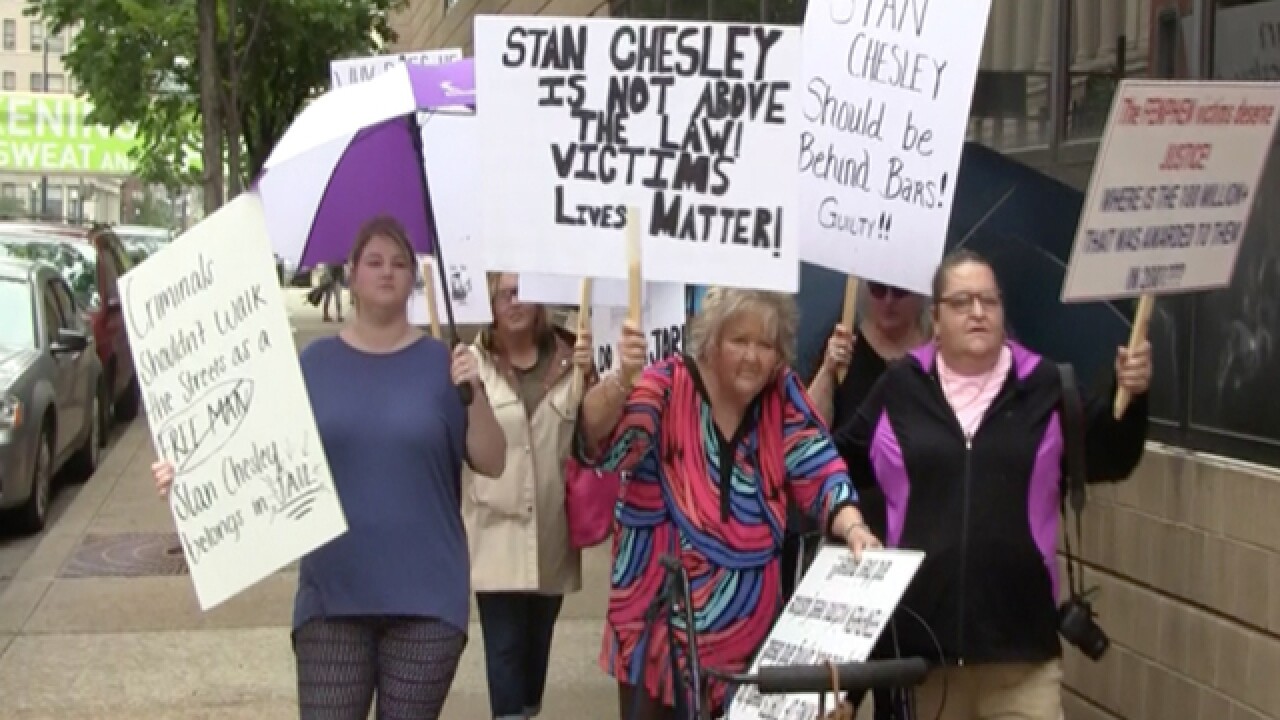 Copyright 2018 Scripps Media, Inc. All rights reserved. This material may not be published, broadcast, rewritten, or redistributed.
<p>Several fen-phen victims protested outside the Hamilton County Courthouse in May 2017. </p> 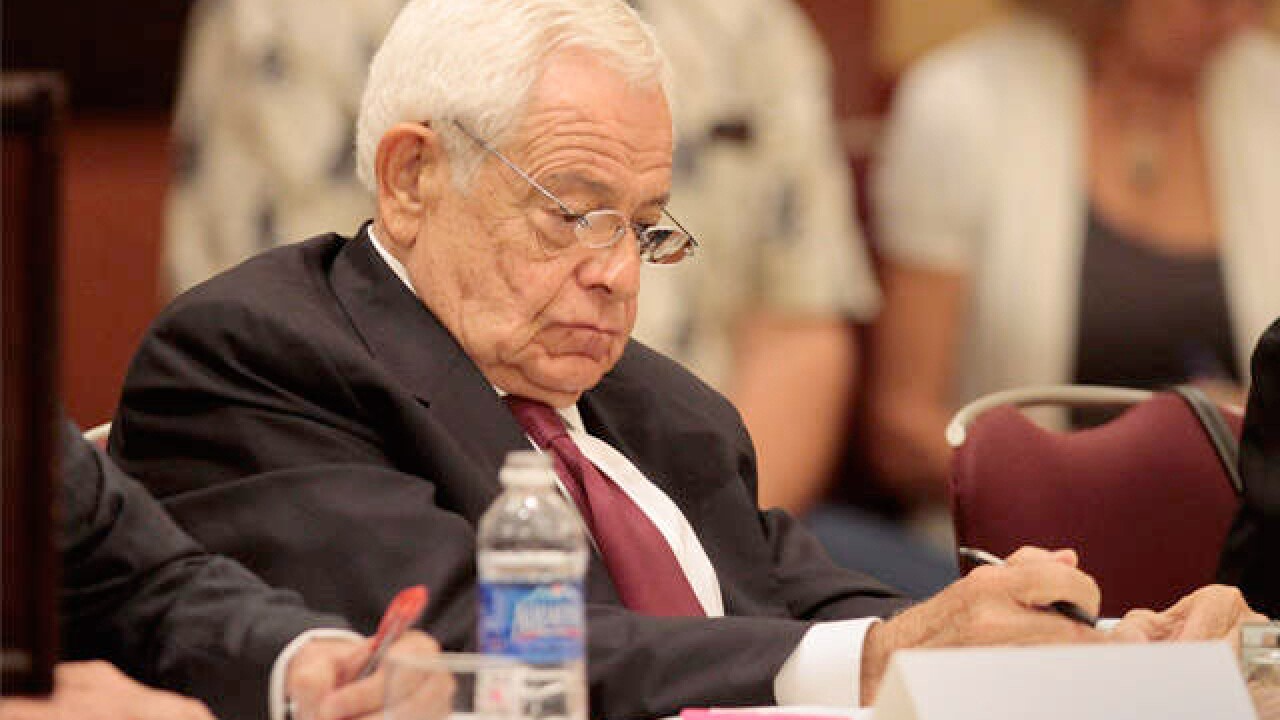 CINCINNATI - Years after hundreds of Stan Chesley’s clients sued to recover money he allegedly stole from their diet drug case, a federal judge announced a $23.5 million settlement on Wednesday.

In a few days the 382 victims of a fen-phen lawsuit filed two decades ago will finally receive money that their attorneys allegedly skimmed from their settlement with the drug maker.

“Some of them had such significant health problems because of the drug; they did lose everything,” said Lexington attorney Angela Ford. “Nearly all of them have had some degree of loss of faith in the justice system … I ran out of excuses to give them years ago for the case dragging on and moving in so many different directions.”

The settlement puts an end to the federal case against Chesley’s former law firm, Waite Schneider Bayless & Chesley, which harbored many of Chesley’s assets after he was disbarred in 2013. It also dismisses eight other related state court cases.

The settlement removes any future claims against Chesley’s wife, U.S. District Judge Susan Dlott, for assets she may have received from her husband.

But the settlement does not end the federal case, or any state lawsuit, against Chesley individually.

“None of these actions have changed his conduct, or his demeanor, or his sense of responsibility for the people he stole from,” Ford said.

In June the federal Sixth Circuit Court of Appeals in Cincinnati issued a scathing rebuke of Chesley and his “scheme” to avoid paying a $42 million judgment dating back four years.

“For years … Stanley Chesley appears to have been orchestrating a high-stakes shell game in an effort to escape a long-overdue multi-million dollar judgment. In the process, he has defrauded hundreds of judgment creditors, many of who are plaintiffs here,” judges wrote in the opinion.

A Kentucky state court issued a judgment nearly four years ago against Chesley for $42 million he owed his former clients. Since then, those victims have been trying to collect.

U.S. District Judge Robert Cleland, a visiting judge from Michigan, approved a settlement this week, which finally makes them whole on that $42 million debt. But they are still owed tens of millions in long-overdue interest on that money, Ford said.

“Chesley has been successfully evading them with the help of his confidantes. In the process, five lawyers have been disbarred; two have been put in jail,” the appeals court wrote. “Through it all, Chesley has managed to transfer most of his assets elsewhere rendering himself judgment-proof.”

An attorney for Chesley did not immediately respond to a request for comment.

The story behind the case began in 1998 when Chesley joined three attorneys in a class-action lawsuit against American Home Products, the maker of the diet drug fen-phen. In 2001, attorneys negotiated a settlement of more than $200 million, for injuries to their clients from the drug’s side effects. The drug maker left it up to the lawyers to divvy up the settlement.

“So the fraud began,” the appeals court wrote. “The lawyers, at least for the time being, made out like bandits.”

The fallout from the scheme has been sweeping. Five lawyers and a judge have been permanently disbarred. Two of Chesley’s accomplices were convicted of wire fraud and are serving prison time. Chesley avoided prosecution by testifying against his co-counsel, according to the appeals order.

After years of trying to collect their judgment in state court, the victims filed a federal suit in 2016 to unwind the assets that Chesley had transferred to his law firm and a trust set up by another attorney, Thomas Rehme.

As part of the settlement, a federal judge issued a permanent injunction freezing those assets and preventing Chesley from ever receiving them.

In May 2017, many of Chesley’s former clients traveled to Cincinnati to protest outside of the Hamilton County Courthouse.

“There’s some of us who are going to die before this is all over with and I might be one of them,” Evelyn Hopkins, of Florida, told reporters then. “It’s destroyed me, it’s destroyed my family.”

Hopkins, who has a pacemaker, stents in her heart and a leaky heart valve caused by the diet drug, lost her home and had to move in with her daughter.

“It wouldn’t hurt him to pay us and he probably wouldn’t even miss it, he’s got so much,” Hopkins said. “I live with my daughter. I live in a bedroom because I can’t afford anything else. I’m on food stamps.”

The $22.5 million settlement will be distributed to victims based on the amounts that were stolen from them in the original fen-phen settlement, Ford said.

“The door is open to collect additional money from him (Chesley),” Ford said.

Connie Centers, a victim from Kentucky, told reporters that some have died awaiting their settlement money.

“Our lives have been destroyed … all this time they’re spending this money on filing this appeal and this appeal, paying out all these fees,” Centers said. “And we’re living in poverty, we can’t pay our bills, can’t get our medicines because of our heart problems. It can’t go on, it has just got to stop.