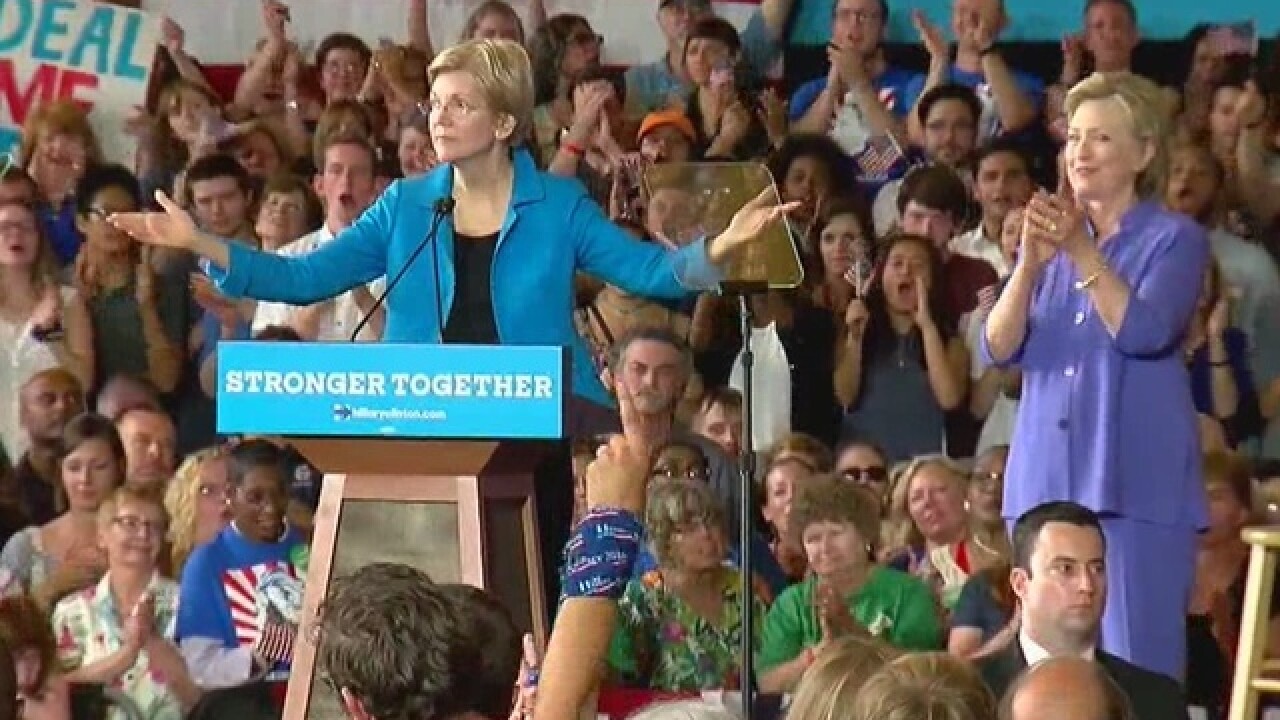 "He's a small, insecure money grubber who fights for no one but himself,” Warren said, referring to presumptive Republican nominee Donald Trump.

Watch the entire event in the video player below.

Warren, D-Mass., spent much of her 15-minute speech ribbing Trump and questioning who exactly is on the receiving end of Trump's making America great again.

“He means even greater for rich guys just like Donald Trump,” Warren said. “Great for the guys who don’t care how much they’ve already squeezed from everybody else."

The Trump campaign responded promptly, promising in a news release that Trump would serve the American people rather than special interests in Washington. The news release also called Warren a "turncoat" and "sellout."

"Warren’s campaigning for Clinton stands in stark contrast to the liberal ideals she once practiced," the news release said. "This sad attempt at pandering to the (Bernie) Sanders wing is another example of a typical political calculation by D.C. insiders."

“She’s been on the receiving end of one right-wing attack after another for 25 years, but she has never backed down,” Warren said. "She doesn’t whine; she doesn’t run to Twitter to call her opponents fat pigs or dummies … she gets up and keeps fighting for the people who need her most.”

While Clinton called Trump “temperamentally unfit and totally unqualified to be president of the United States” near the start of her half-hour speech, she focused the majority of her time on her plans to create an economy that works for all Americans.

Both Warren and Clinton described their hardworking parents and grandparents, saying they lived in a time when the “basic bargain” of America was that hard work would pay off.

“We must have an economy that works for everyone again, and not just those at the top,” Clinton said. “This election is a chance for us to make it right for the future, for our kids and for our grandkids."

Clinton outlined her five economic goals, which include what she called the biggest investment in new jobs since World War II through a $10 billion “Make It In America” plan to strengthen manufacturing in the U.S.

Her other goals include making debt-free college education available to all Americans; rewriting laws so companies share profits with their employees instead of just executives; raising taxes on corporations and the wealthy so they “pay their fair share”; and updating economic policies for the 21st century.

Clinton said she believes in the Warren Buffett rule, part of a 2011 Obama tax proposal that stated no millionaire should pay a lower tax rate than somebody working for him or her.

She also expressed a desire to invest in worker training and apprenticeship programs where people earn while they learn.

“I can be a little wonky, but I have this old-fashioned idea: If you’re running for president, you should say what you want to do and how you’re going to get it done," Clinton said, accusing Trump of lacking clear plans for his presidency.

Trump will come to the Buckeye state Tuesday with a 7 p.m. event at Ohio University's eastern campus in St. Clairsville.