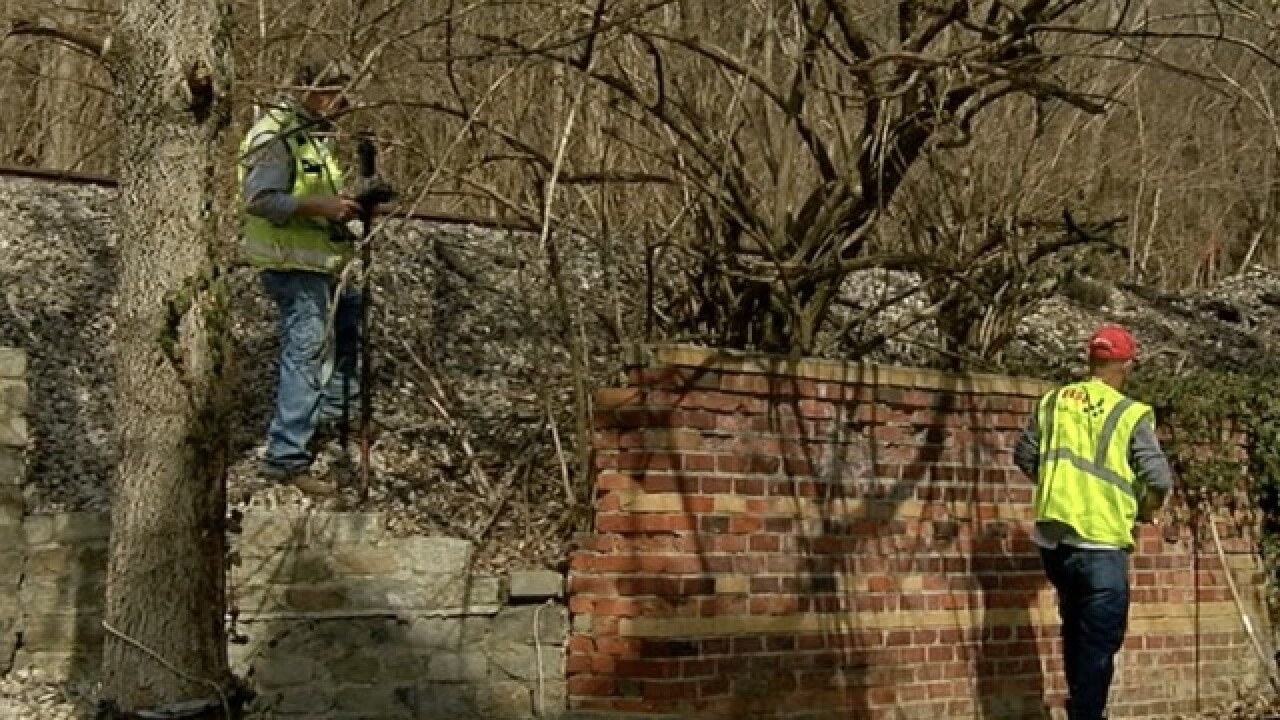 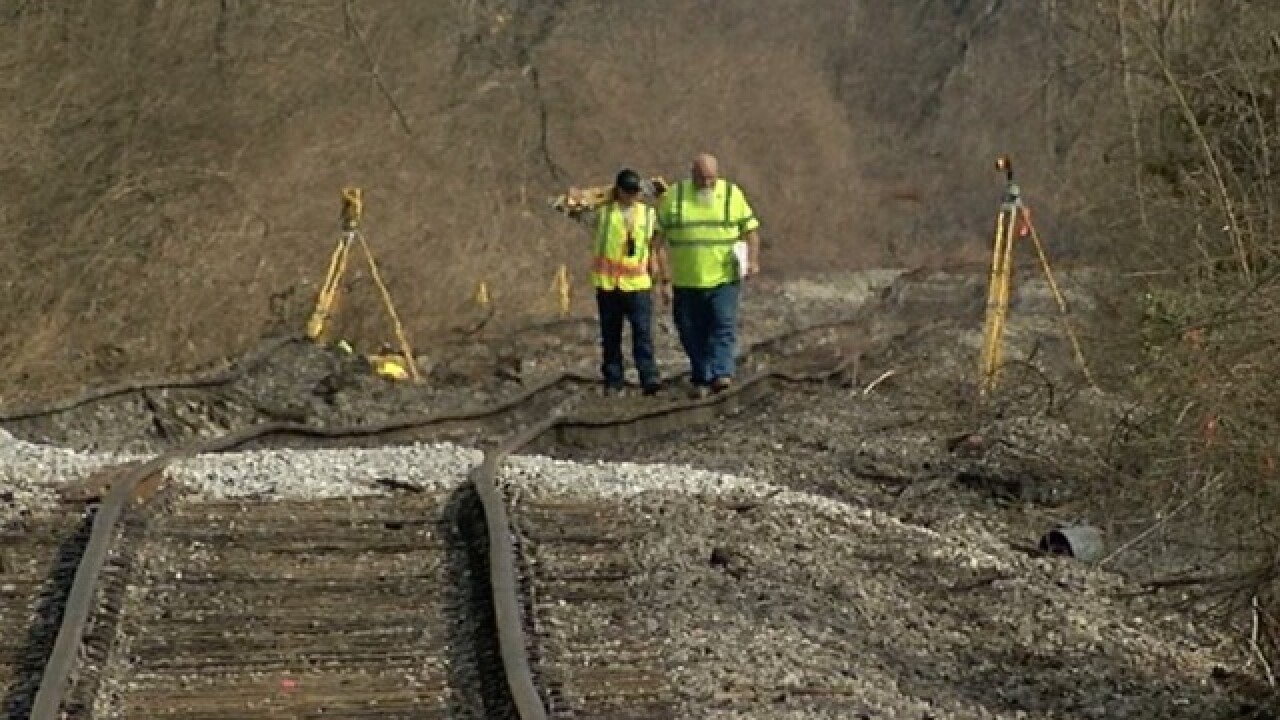 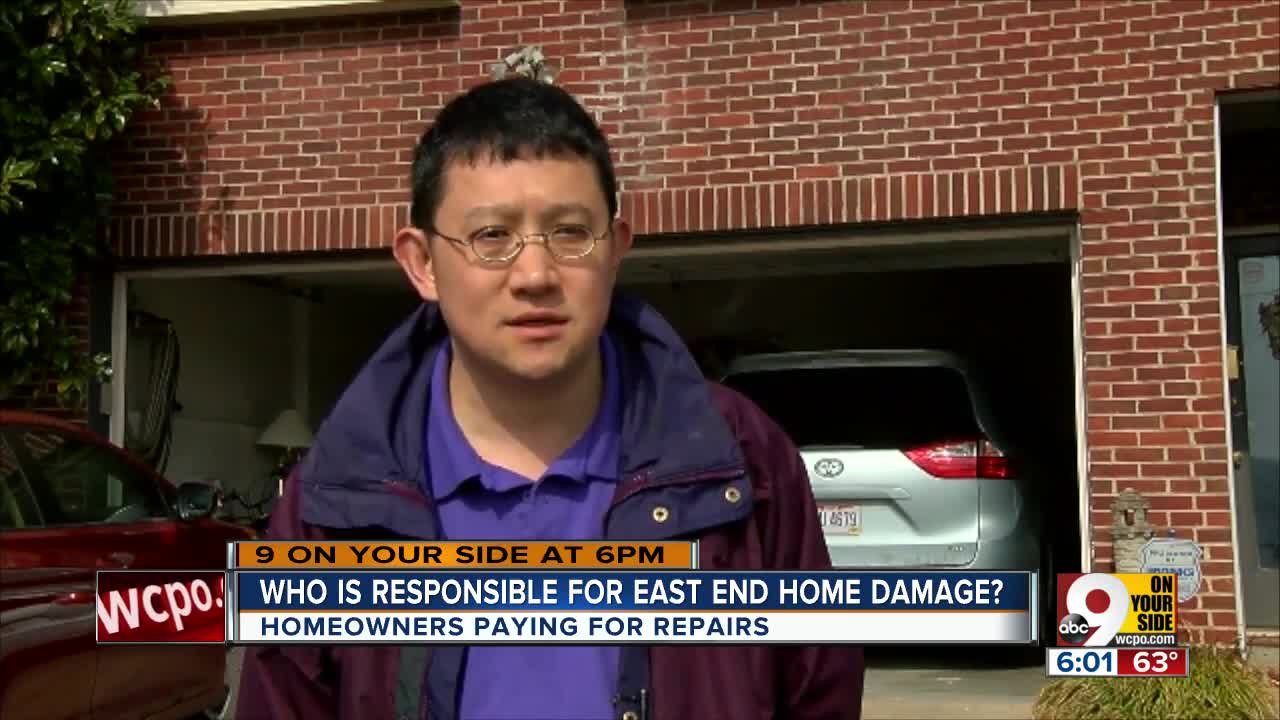 CINCINNATI -- Surveyors worked at a feverish pitch Monday to plot the path of a retaining wall in Cincinnati's East End neighborhood.

They were racing against time: A hillside is sliding several inches a month, threatening water and sewer lines servicing Downtown.

The $5 million to $10 million wall, built by Richard Goettle Inc., will run 1,200 feet between Hazen and Vance streets. Orange ribbons tied to trees Monday marked the exact spot, about 20 feet below a railway.

The city has been monitoring the area for years, noting slippages of a tenth-of-an-inch a year. But that's changed, according to City Engineer Don Gindling.

"Between November and January we noticed considerable acceleration of movement, so instead of a tenth-of-an-inch a year, we're now looking at several inches per month, so the movement is very accelerated," Gindling said last week.

Heavy construction equipment will move in soon and begin digging for 40-foot piers, work that should take about six weeks.

"It will go all the way down and get socketed into the rock, and they will be six foot on center," Gindling said. "So, it's a pretty massive wall. It will have a pier cap on top. That will be anchored into rock, so that will stabilize everything."

City Manager Harry Black said the emergency fix is strictly to save infrastructure; engineers aren't aware of any immediate risks to residents, pedestrians or vehicles, he said.

But 200 yards away at Riverfront Terrace, hillside slippage might have damaged homes. Driveways are pulling away from houses, cracks are showing in foundations and the foundations themselves are shifting.

"From what we gather, there's many different types of forces along the hillside here," said Dr. Sing Sing Way, who moved in four years ago. "We've all hired different engineers to look at it, but I think definite contributing factors could be the movement of the hillside, the railroad tracks and the railroad cars running so near to our houses and/or the way these houses were constructed. We just don't know the relative contribution of each or those factors."

If a slipping hillside is to blame, he said he thinks the city should pay to fix it.

But according to Black, it's not the government's responsibility. East End Area Community Council President Patrick Ormond hopes that changes.

"I'm grateful for what the city has done so far, but hopefully down the road there's some relief for these people that the city might be able to help out with, even if it's a tax abatement or something that can be worked out with the county," Ormond said.

Eric Russo, executive director of the Hillside Trust, said the wall is a good start but thinks it may need to be expanded.

"We have our life savings committed to this home," Way said. "We have  significant amount of income putting into the mortgage and property taxes, so it's a huge burden."