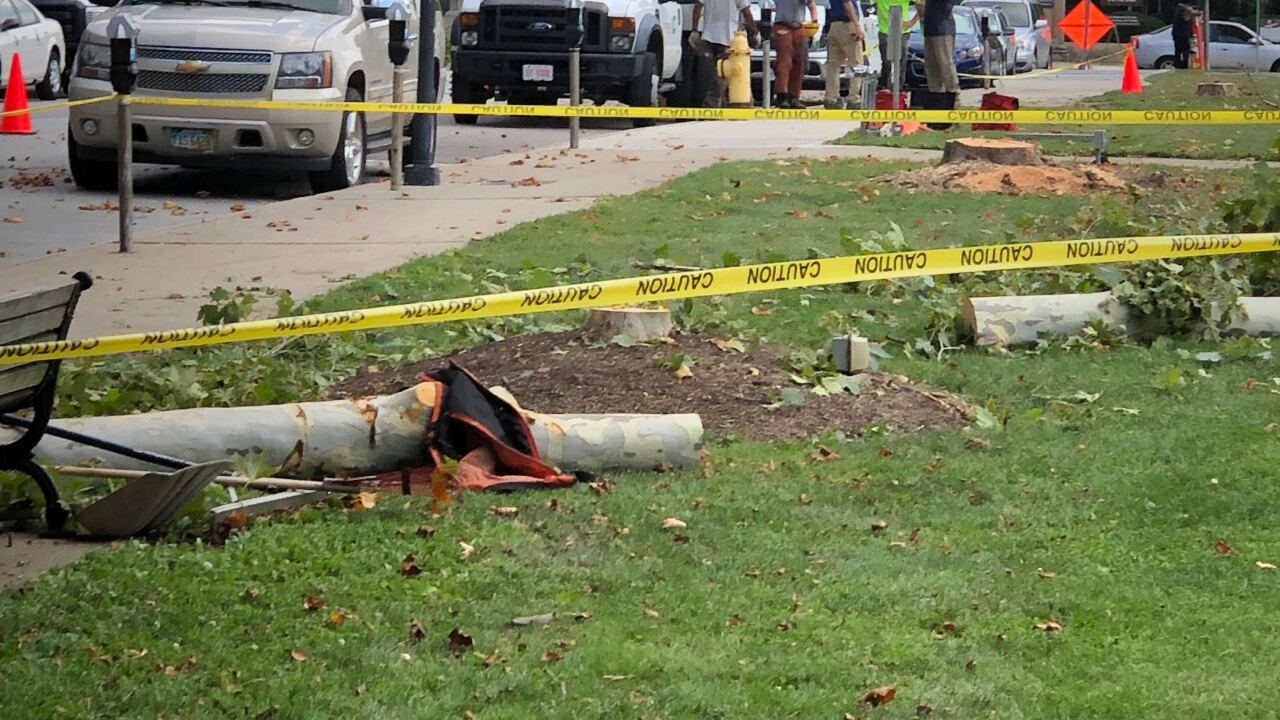 CINCINNATI — Just hours after crews cut down three of the four ill-fated London Plane trees in Lytle Park on Thursday, a local attorney filed a rare legal action asking an appeals court to force the Cincinnati Park Board of Commissioners not to yield its decision-making power over the park to Western & Southern Financial Group.

Attorney Paul DeMarco, who represents activist Kathleen Brinkman’s effort to save the trees, filed a petition for a writ of mandamus with the Ohio First District Court of Appeals.

“Who has the power to control city park property?" DeMarco wrote in the petition. "Is it the supposedly independent park board? Or is it the nearby company dangling money to fix it up and maintain the park for its private business advantage?”

A writ of mandamus is "an order from a court to an inferior government official ordering the government official to properly fulfill their official duties or correct an abuse of discretion," according to Cornell Law School's online legal dictionary — in other words, a judge forcing a government to do something it does not want to do. Obtaining one is usually tough, said attorney Matt Miller-Novak, who is not involved in the case.

This is the latest controversy surrounding the fate of four 50-year-old trees. Renovation plans call for them to be cut down as part of a $2.9 million overhaul of the park.

Representatives of Western & Southern, which is paying $1.6 million to help renovate the park, announced the company wants mature trees replaced by a row of 4-inch saplings "that will produce trees consistent in height and appearance."

Brinkman, an attorney and nearby resident, said the London Plane trees were specifically selected because they do well in urban environments and help improve air quality in densely populated areas. She argued that the trees are in a historic district where guidelines say to not cut down mature, healthy trees.

Cincinnati’s Zoning Board of Appeals in June voted unanimously against saving the trees, ignoring the pleas of Brinkman and other local activists.

Crews cut down three of the four trees Thursday before DeMarco could ask Hamilton County Judge Court of Common Pleas Thomas Beridon to sign a temporary restraining order to stop them.

“The Lytle Park project has been planned for a long time and has now received all the necessary approvals including unanimous decisions from the Historic Conservation Board and the Zoning Board of Appeals," said city parks spokesman Rocky Merz. "Moving forward with the project, providing a net gain of 29 trees and made possible through private funding, will provide a brand new park for the entire community to enjoy.”

Activists are now taking their fight to save the one remaining tree to the appeals court.

“In substance, the park commissioners have ceded to a private company their lawful public authority and duty to maintain exclusive control over city park property and funds, allowing (Western & Southern) in effect to treat the park as its own property instead of the people’s,” DeMarco wrote in his application for a writ of mandamus.

The writ accuses Brad Lindner, chairman of the park board, of saying it takes “a couple million dollars” for citizens to have “a voice” in their parks’ management, during a June 20 meeting in which many citizens urged them to save the trees.

At issue is whether the park board gave Western & Southern veto power over the design of Lytle Park when the former park director signed an agreement in 2017 accepting the $1.6 million gift to renovate the park.