'This is our square': How Cincinnati has changed since the Fifth Third shooting 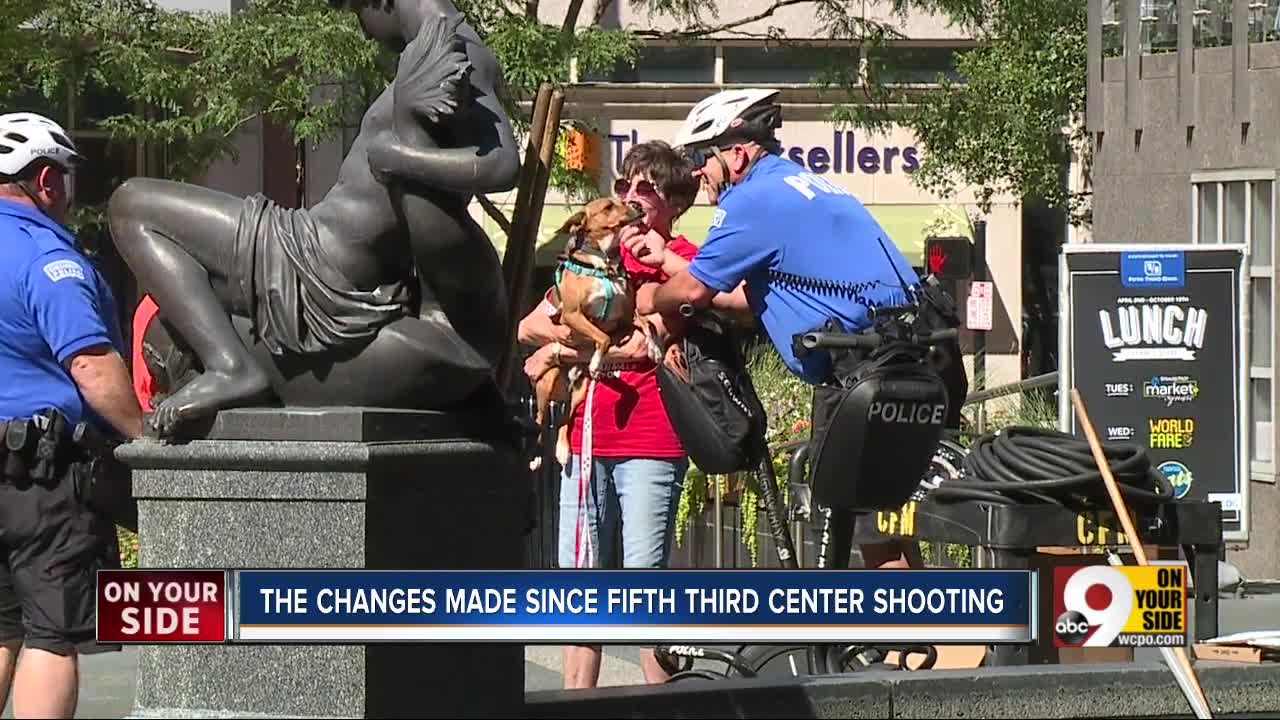 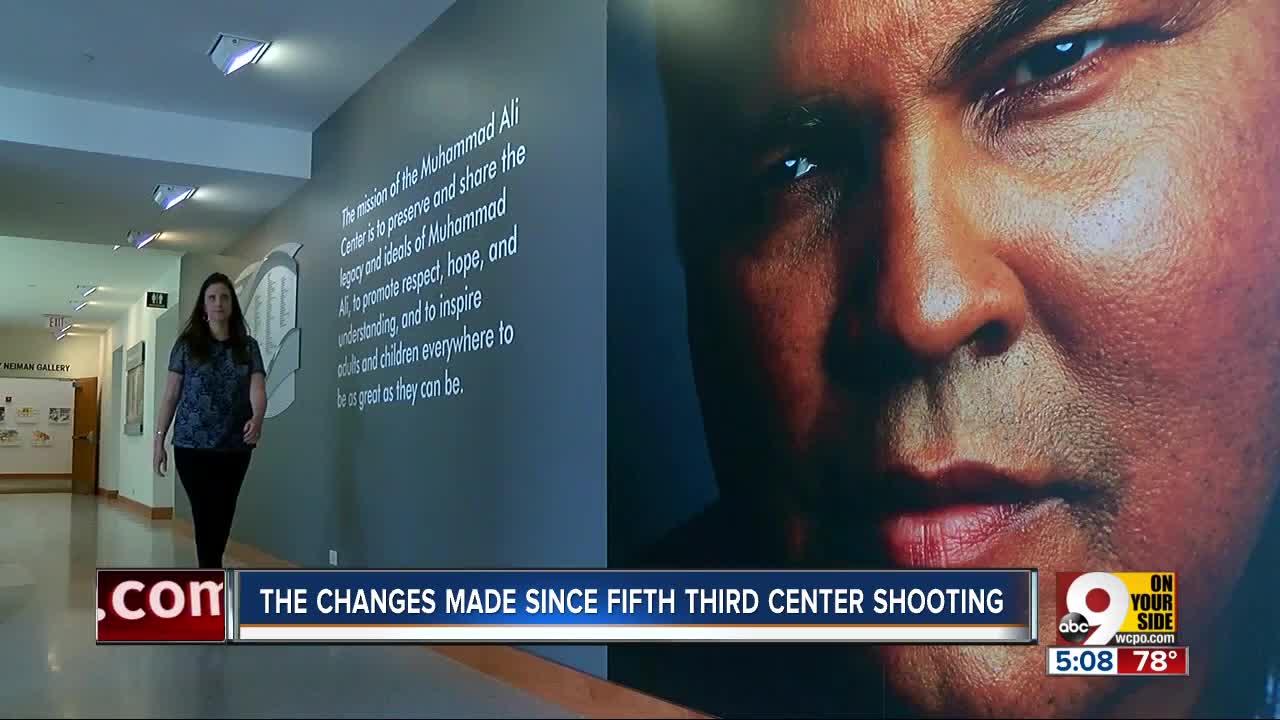 CINCINNATI — In the 12 months since a gunman opened fire in Fifth Third Center on Fountain Square, Cincinnati is determined not to let that day keep them from gathering in the heart of their city.

"If anything, I think it's been a bit of a strengthening point to say, 'No, this is our square,'" said Joe Rudemiller, vice president of marketing and communications for Cincinnati Center City Development Corporation, which hasn't let the shooting stop it from planning 500 events on the square in the last year.

"People were coming down to reclaim it and say we're not going to let this one tragic act kind of take away from this community space and this gathering space."

RELATED: An oral history: Nine people tell the story of the 2018 Fifth Third shooting and its aftermath

"I think it affects all of us that Fountain Square was the target of a (domestic) terrorist attack," he said. "But, it's also a sign of the resilience of our spirit that we won't let terrorists define our freedom, that we'll continue to go there and Fountain Square is as vibrant as ever."

Politicians, activists, business leaders and those injured in the shooting a year ago have different -- and similar -- opinions on what has changed or hasn't changed enough over the last year. Following the shooting, Fountain Square was the place where the community gathered to console each other during a public vigil. One of those in attendance was Michele Mueller.

"I absolutely remember where I was the morning of the Fifth Third shooting," said Mueller, national chapter liaison for the gun violence prevention group Moms Demand Action. Mueller said she was doing work on her laptop for the national organization when her phone rang. It was another local member of the organization.

"He said 'Michele I'm on my way. There's an active shooting situation going on at Fifth Third,'" Mueller said. "Your heart just drops and you think, you know, how? What is it going to take?"

Mueller said she had already been working to change laws in Ohio and other states as a way to curb gun violence.

"We lose 100 Americans every day to gun violence," she said.

But she said she believes groups like hers are seeing some success.

"What has changed overall," Mueller said, "17 states now have red flag laws. And, 21 states have their own comprehensive background checks."

Ohio and Kentucky are not among those states, but Ohio Governor Mike DeWine recently announced his support for some stricter gun laws following the deadly shooting in Dayton last month.

The proposals he introduced include background checks for most gun sales in the state of Ohio and safety protection orders, similar to "red flag" laws passed in other states. DeWine's proposal asks state lawmakers to pass legislation that would allow the courts to remove firearms from potentially dangerous individuals and offer mental health services.

"We've come a long way in Ohio to see good strong legislation being introduced and supported in a bipartisan way," Mueller said.

Whitney Austin is also a supporter of changes in gun laws. One year ago, she was entering the Fifth Third Center for a meeting when she was shot 12 times. Since then she has had numerous surgeries, has left the bank and now operates Whitney/Strong, a nonprofit organization that works to reduce gun violence through responsible gun ownership.

"I feel like I have this purpose in life that I didn't have before," said Austin, who is a gun owner.

Austin said she believes there is a discussion that needs to take place with gun owners who don't want to budge on the issue of stronger gun laws.

"I can empathize with the fear," Austin said. "I want my family safe too. I want to be safe too. There is common ground and we can put together common sense legislation that will save lives. That will not infringe upon your Second Amendment rights."

"When someone says, 'I'm a Second Amendment person,' I always say back to them, 'I am too,'" Mueller said. "We're with them. But, we do need a law that will deter dangerous people from getting guns."

On Aug. 3, Mueller was with 2,000 members of Moms Demand Action at a leadership conference in Washington, D.C., when phones started buzzing.

"Our phones started going off and you know the alerts were coming through that there was an active shooter situation in El Paso, Texas," Mueller said.

Moments later, Brenda Moss, who lost her son to gun violence, spoke to the gathering.

"You didn't get this far by being mediocre," Moss said before receiving a standing ovation. "You're Moms Demand Action and that's what we demand."

Mueller said they felt compelled to do something.

"We were in Washington, D.C.," She said, "And it was just an organic uprising that we wanted to march to the White House and march to the Capitol, march to the Senate building."

Meanwhile, back on Fountain Square, Cincinnati police officers are visible, as are 3CDC staff in bright blue and green shirts, and bank guards stand near entrances to Fifth Third.

"I can't go into any specifics or details about the security protocols that we have in place at this point," said Gary Rhodes, chief communication officer for Fifth Third Bank. "But again, certainly the security of our employees and of all those who visit is a top priority."

Similarly, Austin is also embracing the changes in her life.

After the shooting, "what it did was entirely refocus what's important in life," Austin said.

"I love Fifth Third and I really had a wonderful career there and look back very fondly," she said. "So, I'm very thankful. I'm just doing something new now."