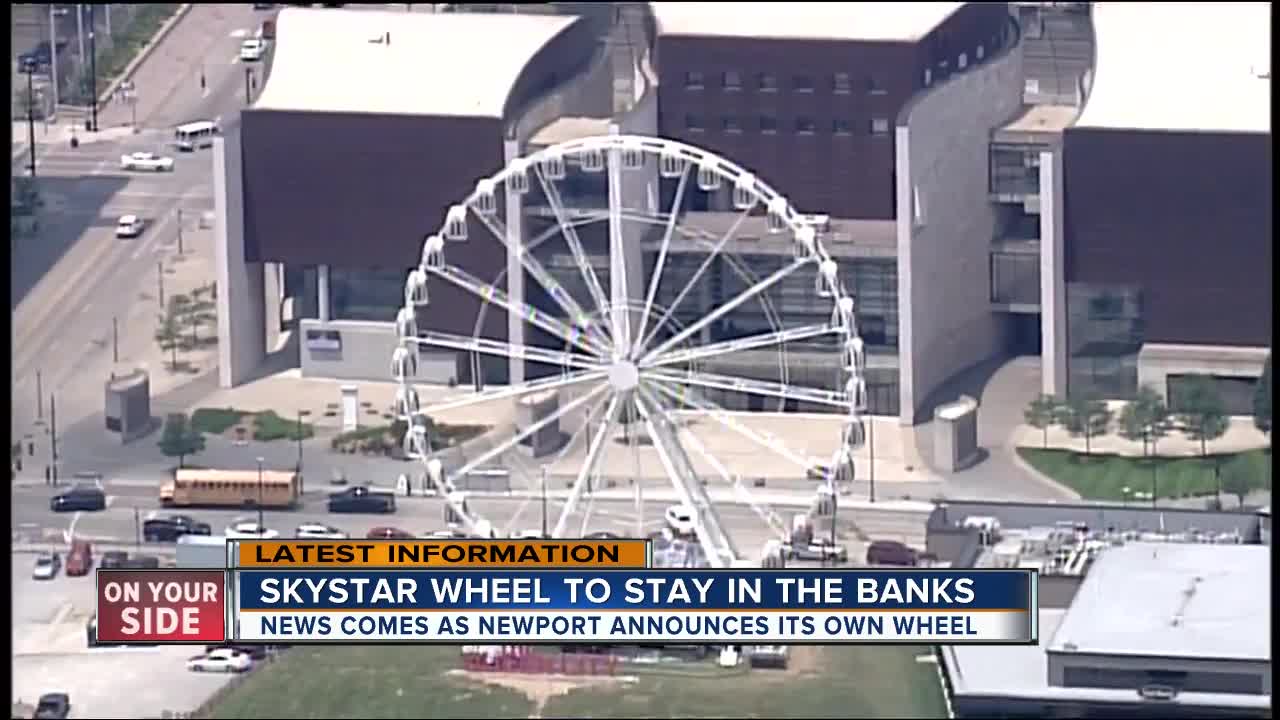 If all goes according to plan, the SkyStar Observation Wheel could be a feature of the Cincinnati skyline for at least the next decade. Phil Beck, the executive director of The Banks Project, confirmed on Tuesday that St. Louis-based SkyStar and Hamilton County Commissioners are working on a deal to keep the 150-foot-tall observation wheel's stay at The Banks for at least ten years.

CINCINNATI — If all goes according to plan, the SkyStar Observation Wheel will not only be a long-term feature of the Cincinnati skyline, it will be bigger and better than the one currently located at The Banks.

That new permanent Ferris wheel would replace the current 150-foot mobile SkyStar wheel that came to The Banks last August.

Schneider said his company plans to release renderings of the new Ferris wheel after his company and the Hamilton County Commission finalize a deal that will keep SkyStar in Cincinnati for at least the next 10 years.

Construction of the taller, permanent SkyStar Wheel could begin within a year, Schneider said.

Phil Beck, the executive director of The Banks Project, confirmed last week that the deal to keep SkyStar at The Banks includes two five-year extension options after the initial 10 years.

SkyStar sits on an empty parcel of land owned by Hamilton County.

The mobile observation wheel was scheduled to leave The Banks on June 17. Beck said Hamilton County and SkyStar agreed to a two-month extension to buy SkyStar and county commissioners "time to negotiate a final agreement."

"We're not asking for anything," Schneider said, referring to any request for public financial assistance to build the new SkyStar wheel.

The developers of The Banks brought the SkyStar to the Queen City to commemorate the riverfront project's 10th anniversary. At the time, those developers said the wheel would move on to another city on Dec. 3.

The SkyStar Wheel company then announced on Dec. 2 that the wheel would continue to operate at 55 E. Freedom Way through Father's Day.

The news comes months after Newport City Commissioners cleared the way for developers to bring the Newport Skywheel to the riverfront in Kentucky.

A ticket for the SkyStar is currently $12.50 per person. The attraction is open daily.