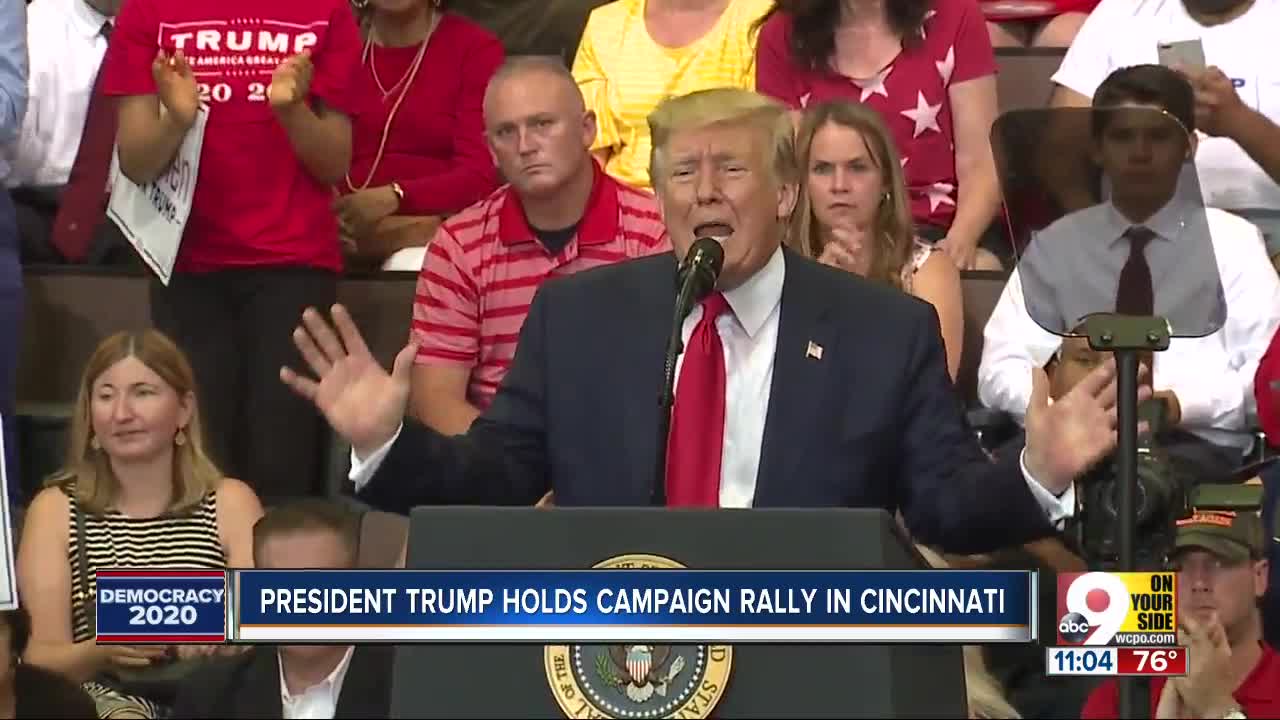 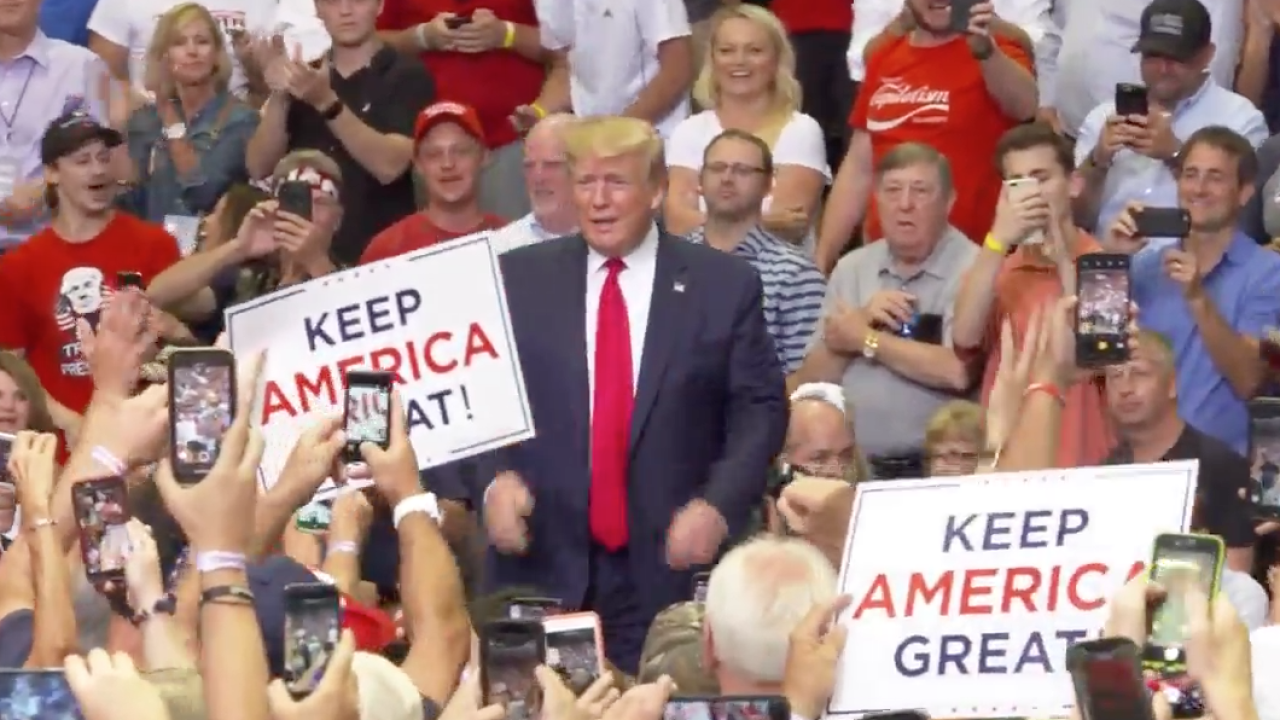 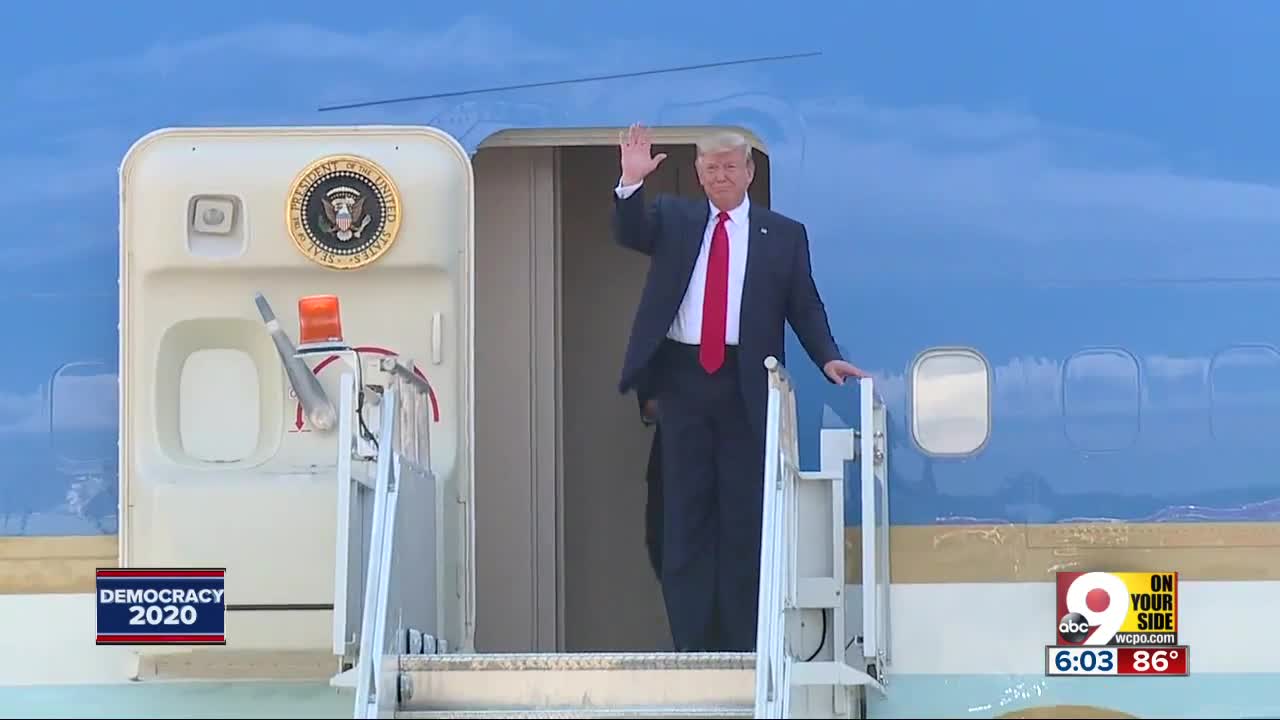 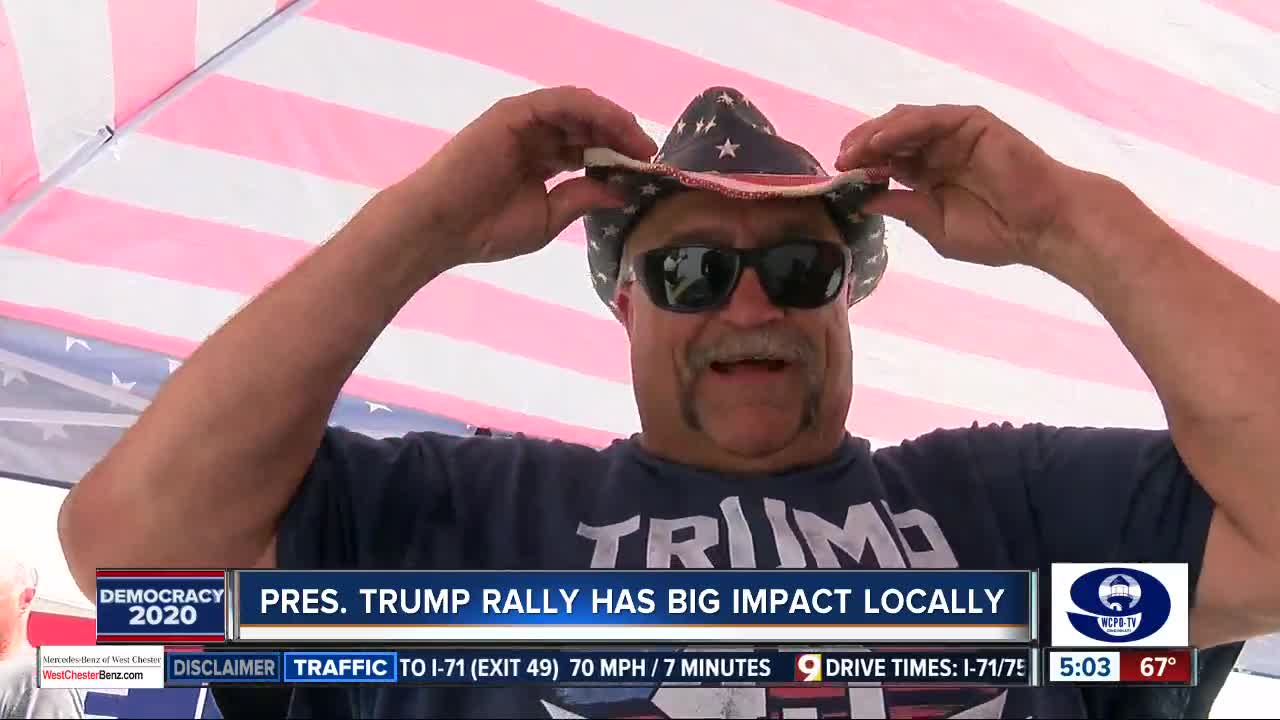 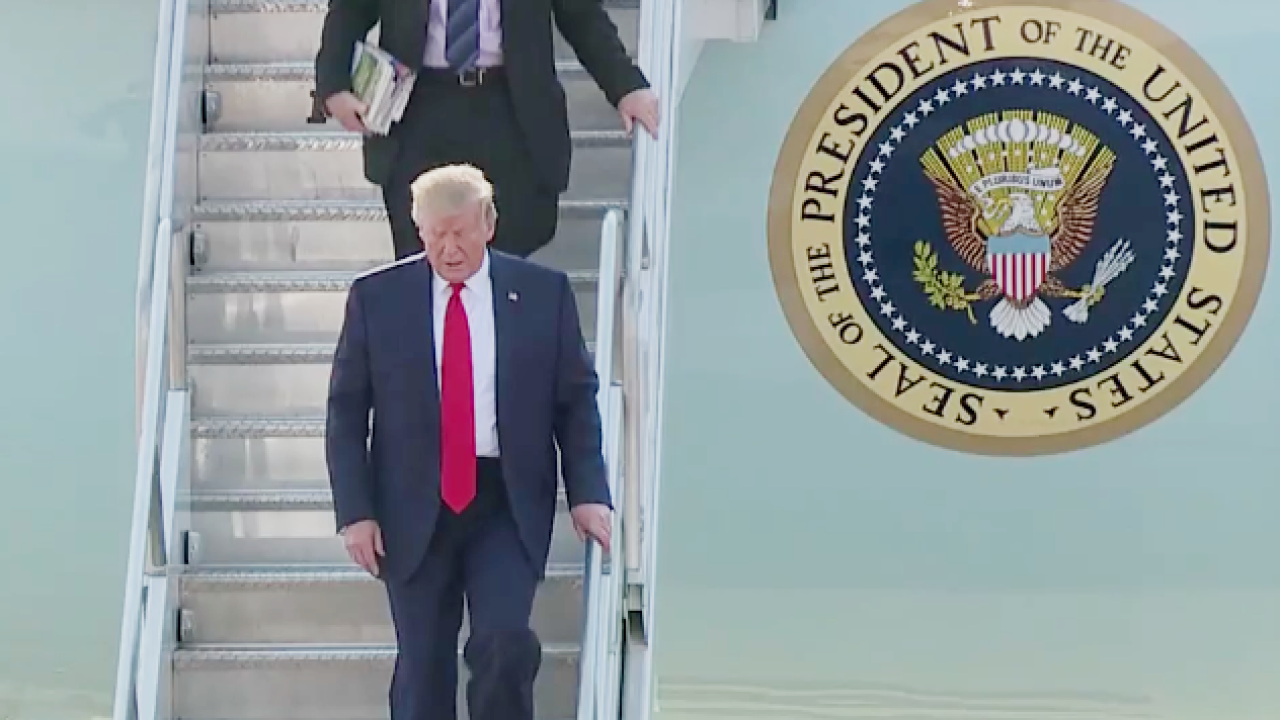 CINCINNATI — President Donald Trump attacked Democrats by claiming they put illegal aliens ahead of citizens and touted his record for creating jobs and opportunities for all Americans as well as strengthening the economy at a rally at US Bank Arena Thursday night.

Far behind in the polls with the election 15 months away, Trump called the Democrats the party of the socialism and got several standing ovations from the Cincinnati crowd with appeals to their patriotism and promises to "Keep America Great," the theme of Thursday's rally.

The crowd booed when Trump mentioned the Democratic debates and when he said Democrats threatened their rights to own guns.

Trump devoted most of his 90-minute speech to criticizing the opposing party and taking credit for low unemployment and a bolstered military.

With a full house regularly breaking into chants of "USA, USA, USA," Trump claimed the "the Democrat party is now being led by four left-wing extremists who reject everything that we hold dear." Those four presumably are Rep. Ilhan Omar of Minnesota, Alexandria Ocasio-Cortez of New York, Rashida Tlaib of Michigan and Ayanna Pressley of Massachusetts - the same four he previously said should "go back" to their native countries even though three of them were born in the United States. Pressley was born in Cincinnati.

Trump also charged that the Democratic Party has destroyed inner cities through "corruption, neglect and decay - total decay" and he mentioned Baltimore. But he did not mention Cummings by name. Trump recently called Cummings' Maryland district "a disgusting, rat- and rodent-infested mess."

Trump called Biden "Sleepy Joe" while talking about new tariffs Trump put on China this week. He claimed America was losing "hundreds and hundreds of billions of dollars" though previous trade agreements until he imposed tariffs on China.

Trump said China would like Biden to become president because Biden "has no clue what he's doing. They'd say to Sleepy Joe, 'Sir, just sign there' and he'd say, 'OK, I'll sign.'"

Trump attacked Warren's claim that she is part Native American, calling her "the great Pocahontas."

"I have more Indian blood than she does and I have none," Trump said.

The rally was interrupted twice by hecklers while up to 100 protesters demonstrated outside.

Scuffle breaks out in Trump crowd after protesters held up “immigrants built America” sign. Trump supporters tried to rip the sign out of their hands. pic.twitter.com/taCRKxoCqe

The first time protesters caused Trump to pause - almost 15 minutes into his speech - Trump turned to someone in the audience and asked in a low voice, "Democratic mayor?"

After a 14-minute pause, Trump said to the crowd, "Do you have a Democratic mayor? That's what happens."

Trump didn't comment on other local issues, such as the need for funding to replace the Brent Spence Bridge, or City Councilmember PG Sittenfeld's plan to create of a "rapid response network" to protect immigrants and refugees from federal immigration raids.

He touted a new plan for lower prescription costs (buying from Canada and Europe), promised "bold" action with Sen. Rob Portman of Ohio on the opioid epidemic, and said the AIDS epidemic and childhood cancer would be ended soon.

Trump said the 2020 election is about stopping Democrats from turning America into a socialist country and making a future based on "those four beautiful words - Made in the USA."

The rally, scheduled for 7 p.m., started late because Air Force One was late to arrive at CVG.

Trump supporters shouted "send them back" about the four Democratic congresswomen known as The Squad at a rally in Greenville, North Carolina, two weeks ago.

There was no such reaction Thursday, perhaps because Trump commented about it before the Cincinnati rally.

Pres. Trump on whether he'd try to stop any chants from supporters of "send them back" at tonight's rally: "I don't know that you can stop people...We'll see what we can do. I'd prefer that they don't. But if they do it, we'll have to make a decision then" https://t.co/JsAo4rT8TM pic.twitter.com/ViuBmatm6a

The WCPO team spoke with several Trump supporters as they left the rally. Here's what they had to say:

Sheila Woodard, Cincinnati: "I liked everything single thing he said and Pence as well. They were outstanding. I couldn’t ask for better. I'm proud of him."

Cheryl Smith, Cincinnati: "His speech was awesome. It made me proud to be an American."

Eli Rosenbaum, Cincinnati: "I feel unbelievable. I feel like so much love in the air, love for the country, love for just being an American."

Other supporters cited the economy, relations with Israel and his plans for health care as reasons they support the president.

Police shut down interstates and streets for the president's motorcade to Downtown.

Trump supporters started streaming into the arena when gates opened at 4 p.m. Some had been camping out here for days.

Pence has been in the Tri-State since Wednesday when he visited a plant in Lancaster, Ohio. He visited a Northern Kentucky chili parlor Thursday afternoon.

Even for the Vice President, the answer is apparently "Skyline."

Thanks to the Ft. Wright team for letting us use their photo! pic.twitter.com/SI3RX432r1

This was Trump’s fourth rally in Cincinnati and his 29th rally in Ohio since he first began his race for president in 2015. After his election in 2016, Trump's first trip was to US Bank Arena to thank Ohioans for giving him the state over Hillary Clinton, even though Hamilton County voted for the Democrat.

There were at least two organized protests in the crowd outside the arena Thursday.

About 100 protesters, led by United We Stand, gathered at the corner of Broadway and Pete Rose Way to protest what it called Trump's "hate speech."

Sen. Sherrod Brown released a statement ahead of Trump’s rally saying Trump has “made a lot of promises to Ohio workers and families, but he has failed to deliver on those promises.”

“The President promised to fix the Brent Spence Bridge, to invest $1 trillion in infrastructure projects and to support American workers,” Brown said in a statement, neglecting to mention that President Obama had also promised to fix the bridge. “Instead, we’ve seen a President who has betrayed workers by pursuing policies -- like his $1.5 trillion tax bill -- that favor the wealthy and big corporations over working families.”

Some Trump supporters arrived outside the arena days ahead of time to camp out. The rally was first come first serve for tickets.

Randal Thom, of Minnesota, made the 11-hour drive to put up his signs long before Trump and Pence arrived. Thom has been to 52 Trump rallies around the country.

“We always come a day or two early,” Thom said. “This time we came even more early because it’s a big venue.”

Another camper, Ken Barten, of St. Louis, said he has been to 25 rallies, and each was a little bit different.

“So, you know, it’s really going to be interesting now that the Democratic debates have started up to the second rounds,” Barten said.

Trump claimed the rally had a "record" crowd, but there was no official tally. US Bank Arena has a listed capacity of 17,090. For perspective, a sold-out Cyclones game is 16,529. That doesn’t include the floor space, which were used for Trump’s rally.

“It’s a little unusual to have both the president and the vice president,” Triantafilou said. “I think that speaks about the importance of Ohio on the electoral map.”

Triantafilou said he expected Trump to talk about the economy and jobs. The rally would inspire some Ohioans to get involved, Triantafilou said, so he was encouraging people to make sure they are registered to vote.

Not only would the rally encourage voter registration, Triantafilou said, it would encourage grassroots movements.

“That’s the main benefit from our perspective of having him here because people get involved and we need those volunteers to do things,” Triantafilou said.