COLUMN: NAACP panel on gun violence in the black community underscores how much work there is to do

'These are wounded places' 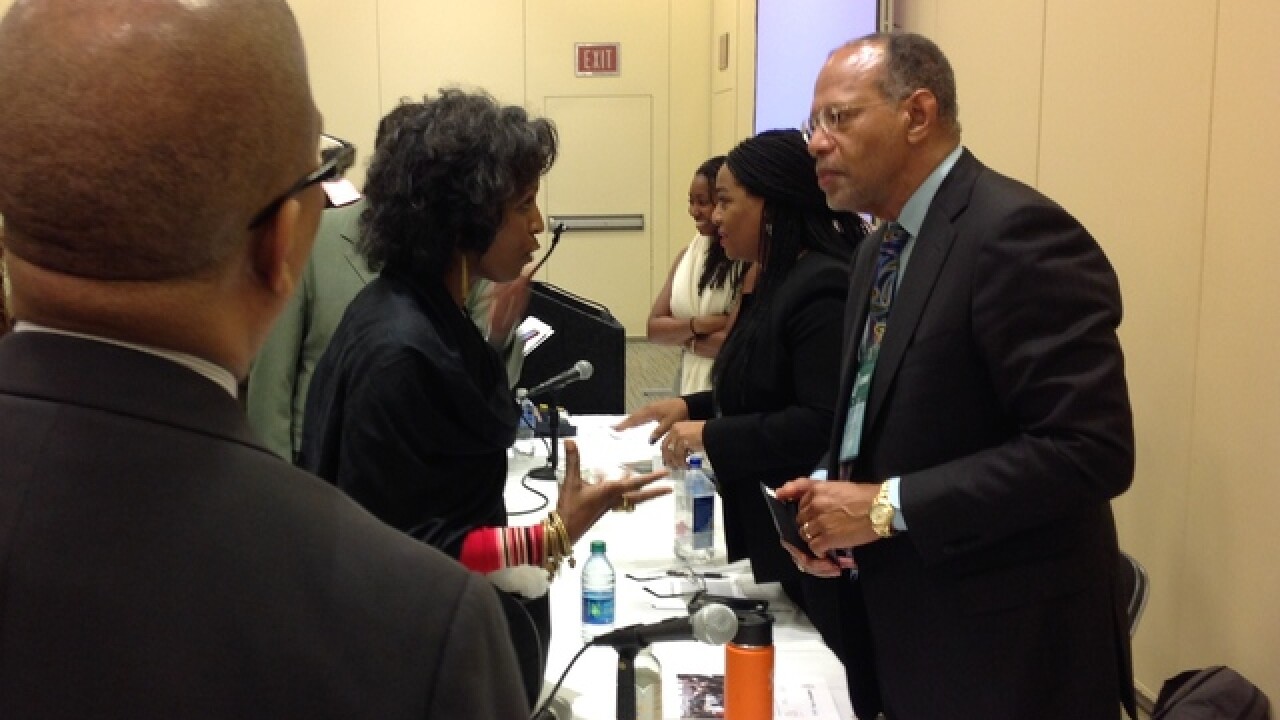 Lucy May | WCPO
<p>Scores of people attending the 2016 NAACP Annual Convention packed a meeting room for a panel discussion about gun violence in the black community.</p> 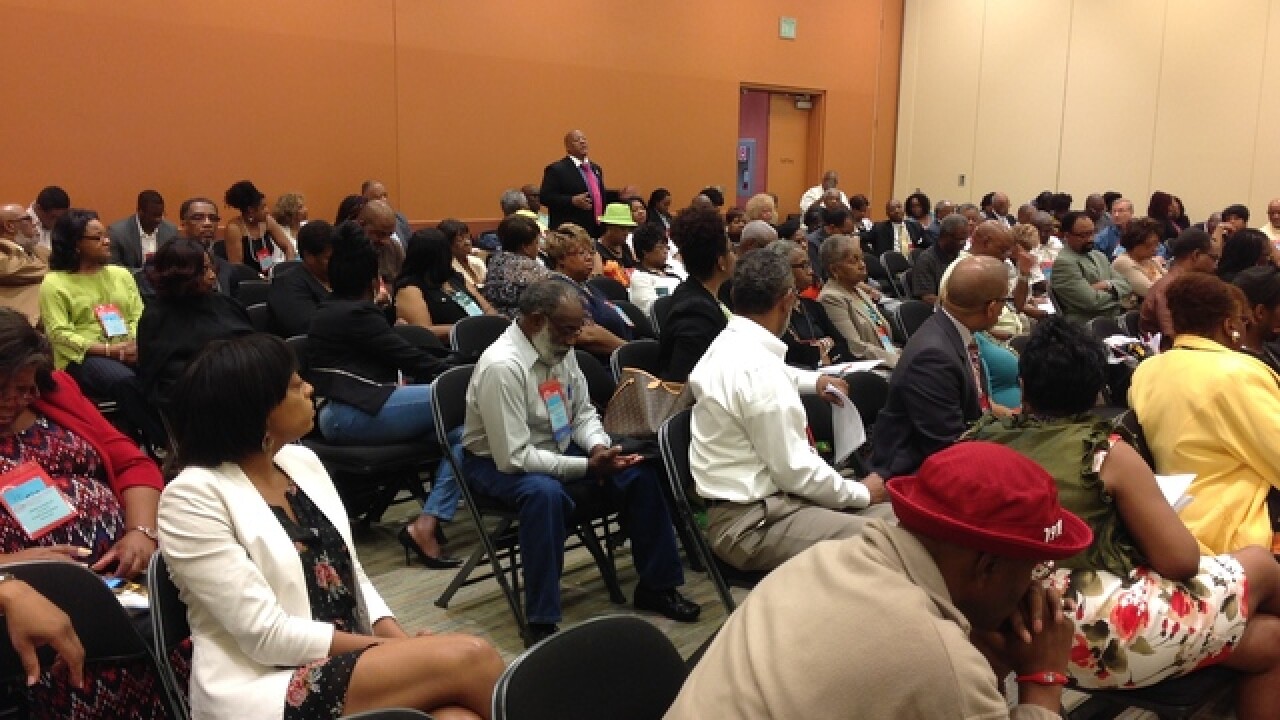 CINCINNATI — Dr. Victor Garcia sat before a packed room at the 2016 NAACP National Convention on Tuesday afternoon and said the words he has so many times before.

• "The violence that we're seeing in the urban communities is a consequence of concentrated disadvantage."

• "These are wounded places."

• "We shouldn't be asking what's wrong with these kids. We should be asking, 'What happened to them?'"

Garcia, a pediatric surgeon at Cincinnati Children's Hospital Medical Center, was one of five speakers for the convention's criminal justice panel entitled "Gun Violence in the African American Community."

As a surgeon, he's seen gun violence up close. More children than he cares to count have ended up on his operating table because of gunshot wounds. One girl who died on that table inspired him to try to figure out the causes behind the violence, and he has been working to reduce poverty and improve economic opportunities in urban neighborhoods ever since.

The NAACP's criminal justice panel gave Garcia the chance to share his insights with people from across the country.

He talked about how gun violence could be viewed as a public health problem, like cancer. When it comes to treating cancer, doctors and researchers don't only find better ways to cut out tumors or more effective chemotherapy drugs. They find out what's causing cancer, then work to convince people to change their behaviors and environments.

"This decade, for the first time, we have a drop in cancer rates," Garcia told me after the panel. "It's because we're getting more people to not smoke."

The way Garcia sees it, part of the answer to gun violence has to be creating economic opportunities for people living in poverty who don't have any now. He told the NAACP members at the end of the panel discussion about Waterfields, a company inspired by Garcia's organization CoreChange. Waterfields grows microgreens at a hydroponic facility in the West End and hires local people from poor urban neighborhoods to work there.

But gun violence, like poverty itself, is complicated. And Tuesday's panel discussion delved into many issues, frustrations and solutions over its 90-minute duration.

'This Is An Uphill Battle'

Where Garcia aimed to appeal to the audience with science and research, Kayla Hicks spoke to their hearts.

Hicks is the African-American and community outreach director for the Educational Fund to Stop Gun Violence in Virginia. She said easy access to guns is one of the problems.

When people get released from prison and can't get decent jobs, they can gravitate towards illegal activities so they can feed their families and meet their obligations, she said.

"This is an uphill battle," she said. "And we also tend to forget about the young people."

Hicks talked about sitting with a 17-year-old boy who had never gone to jail but was suspected of killing several people.

Hicks cautioned that part of the problem is that too many parents have disconnected from their children — texting them instead of talking with them face-to-face and questioning what's wrong with kids today instead of asking, "What's wrong with us?"

"There's a lot of work that has to be done," she said.

Hicks said her organization teaches young people and their parents how to be effective advocates — whether that's through contacting their mayor and city council members or writing a letter to the editor.

"We show them what real effective advocacy looks like," she said. "Because if policy doesn't change, everything remains the same."

Those policy changes can happen at the local, state and federal level, Amber Goodwin told the scores of people in attendance.

Goodwin works for the Community Justice Reform Coalition, a group that promotes and invests in proven strategies to reduce gun violence in urban communities of color.

In addition to changing laws, though, Goodwin's organization also highlights community efforts that are making a positive difference in neighborhoods.

There are community programs that work, she said, but they often struggle to get the funding they need to make a bigger difference.

"You can tell a lot about an organization by where they put their money," she said. "People just are not putting their money behind people of color."

The concern and frustration in the room were palpable, and the discussion turned to issues of policing when Jessyca Dudley of the Joyce Foundation's Gun Violence Prevention Program asked the panelists to address all the bloodshed of the last two weeks.

Hicks, the wife of a black police officer, said she worries that cops like her husband will start to leave law enforcement in droves if the environment doesn't change.

"In health care, the more doctors and nurses you have that look like you, the better your outcomes are going to be," he said. "Similarly, I think the police force needs to represent the population that it serves."

And Edward Boone, the community programs coordinator for Strengthening Chicago's Youth, said he thinks some of the violence is the result of too much silence on the part of decision makers for so many years.

"These things have been going on for decades, and some of our leaders have remained silent or looked the other way," he said. "We have to end that code of silence with our elected officials and hold them accountable."

I sat and listened and took notes during the panel discussion. But, as a white woman who grew up in neighborhoods where people didn't get shot routinely, I would be a fool to say I understood all the emotions in that room.

I did leave thinking that all of us would be wise to try to understand — especially after the events of the past two weeks. Closing our ears and our minds seems like a bad option.

As Garcia put it: "If we come into this situation thinking that there is no way to change, then we need to move to New Zealand or someplace."