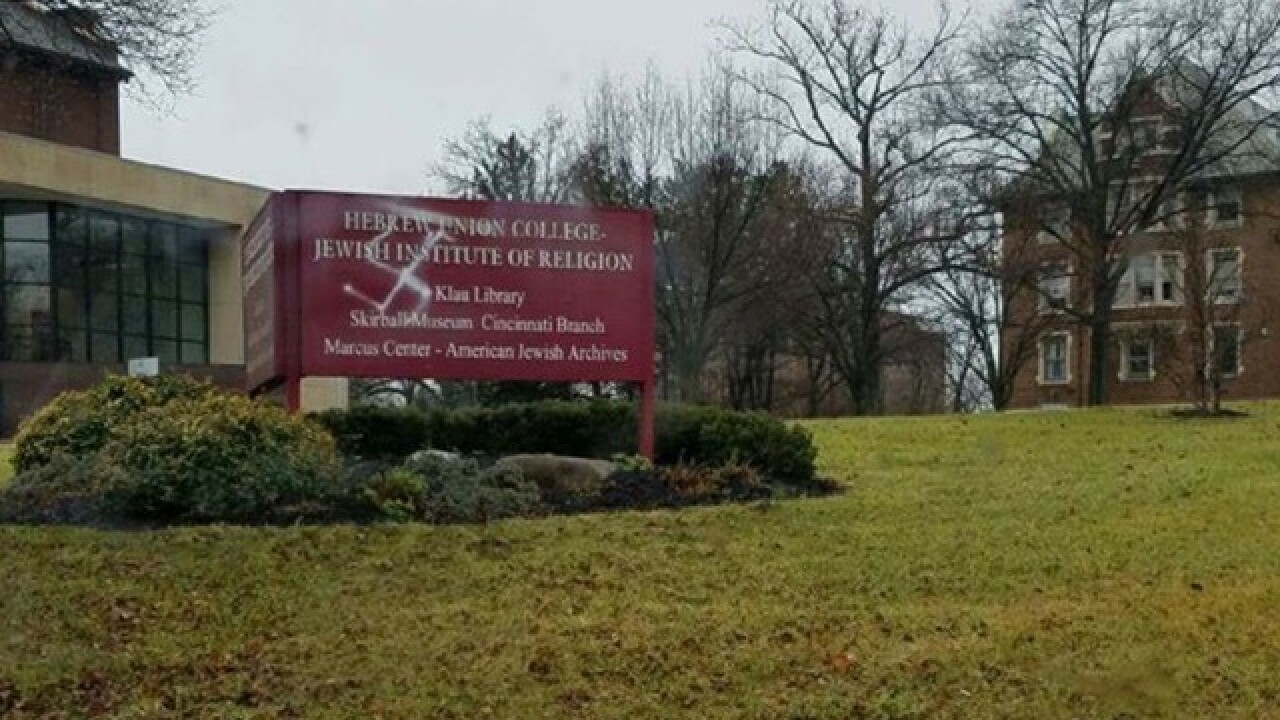 Copyright 2017 Scripps Media, Inc. All rights reserved. This material may not be published, broadcast, rewritten, or redistributed.
Lisa Dillon
<p>CINCINNATI. Jan. 3, 2017. A sign outside Hebrew Union College in the city's University Heights neighborhood was vandalized with a swastika.</p> 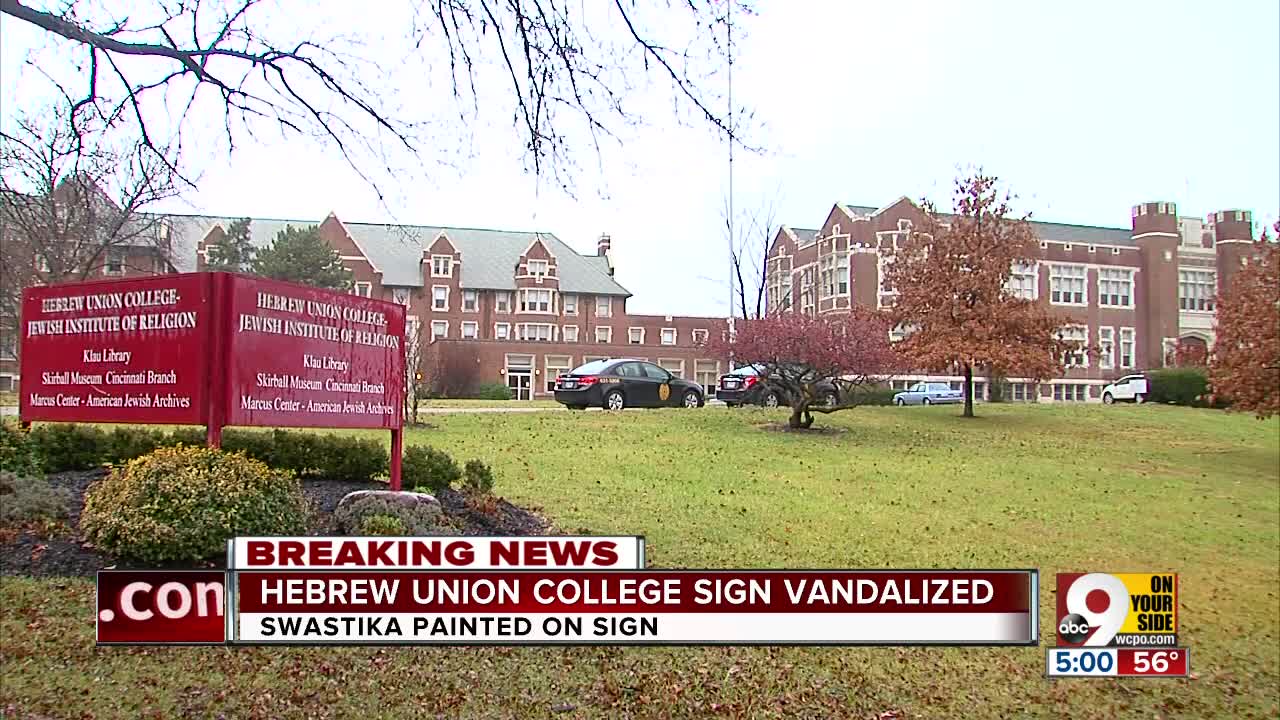 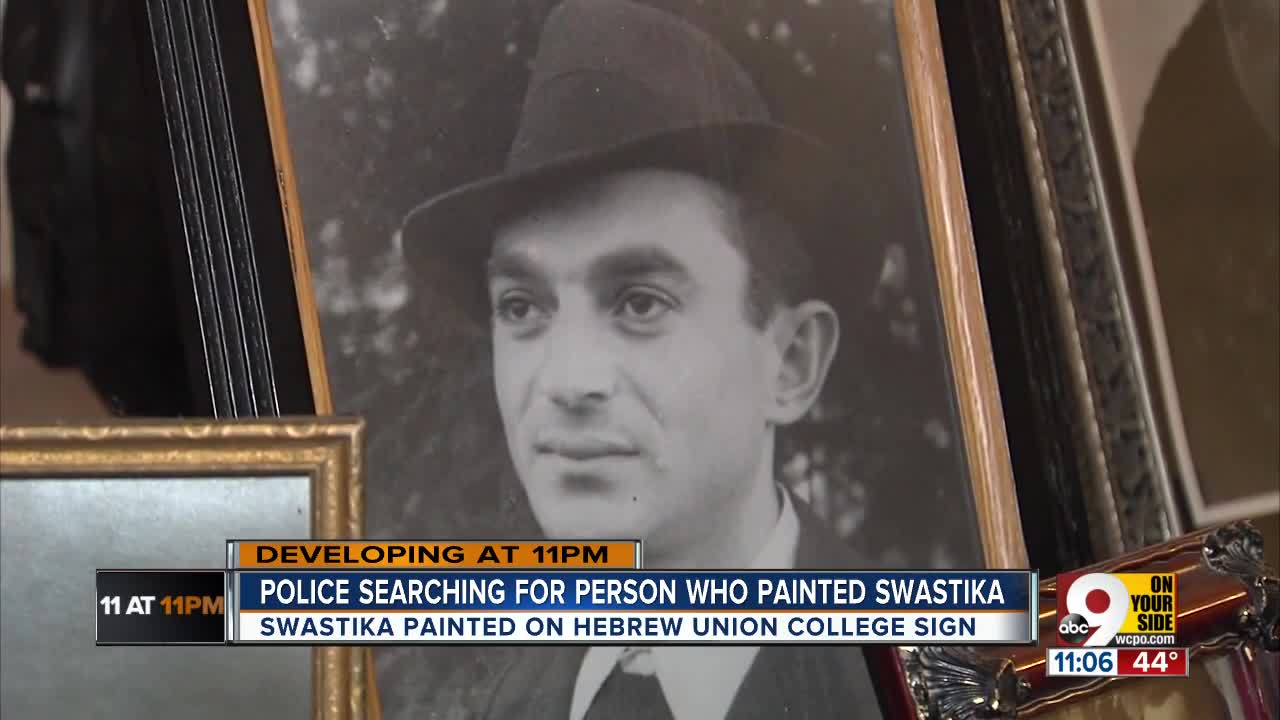 CINCINNATI -- Staff at a Jewish seminary filed a police report, then quickly and quietly removed anti-Semitic graffiti from a sign near the school's main entrance Tuesday.

But as word spread of the vandalism, Hebrew Union College was inundated with support from police, politicians and people around the country.

"It's an important moment, because it represents what our city should be and, in fact, what our reality often is: wonderful people, and at the same time, ugly moments that we experienced today," said Rabbi Kenneth Kanter, an associate dean.

Someone painted a white swastika on a campus sign, likely late Monday or early Tuesday. Ronald Regula, the college's director of operations, reported it to Cincinnati police at about 10:15 a.m. Tuesday.

The graffiti was gone by Tuesday afternoon. Hebrew Union's president, Rabbi Aaron Panken, said the paint was easy to remove.

Images captured on smartphones and shared through social media were more lasting: Kanter said someone driving on Clifton Avenue took a photo of the vandalized sign and sent it to a friend, who posted it on Facebook. From there, city politicians caught word and put out statements of condemnation.

Disgusting and absolutely unacceptable. I will do everything I can to find who did this and hold them accountable. pic.twitter.com/NqcYB9UUP3

"This act of hate perpetrated against our brothers and sisters at Hebrew Union College is an attack on our entire community," Mayor John Cranley said in a statement Tuesday afternoon. "I am deeply offended and disturbed by these actions."

The police report was filed as a case of criminal damaging with anti-Jewish bias. Cranley said the city was working with all its resources to find the vandal.

Cincinnati Police District Five is handling the investigation, and Kanter said officers were reviewing video surveillance footage from the area to see if it offered any clues.

Anyone with information is asked to call Crimestoppers at 513-352-3040. Callers can remain anonymous and could receive a reward.

"We will not let this act of hate alter our important work," Panken said in a statement. "We are indebted to the people of Cincinnati who have stood by us for generations and who have offered their support again today."

It's the second instance in as many months that the symbol, appropriated by Nazis in the 20th century and now viewed as anti-Semitic and racist, was used to vandalize property in Cincinnati. Last month, an interracial couple found swastikas and other vandalism at one of their rental properties in East Price Hill. One of their former tenants was arrested and charged in that case.

Despite that, Kanter said he couldn't recall any similar incidents at Hebrew Union College in recent years.

"It's so rare in the Cincinnati area. Let me say, hate crimes such as the defacement of property happens all over the country," he said.

Some have blamed President-elect Donald Trump, whose candidacy was cheered by white supremacist groups, for a nationwide spike in racial vandalism and threats.

One of the most widely-publicized instances came in New York City, where a playground named for the late Beastie Boys' star Adam Yauch also was vandalized with swastikas in November. Photos show the swastika and words "Go Trump!" were spray-painted on playground equipment in the Brooklyn Heights neighborhood. The city named the park for the late rapper, who was Jewish, in 2013. He died of cancer in 2012 at the age of 47.

A Southern Poverty Law Center survey of 10,000 educators, taken after last year's presidential election, found "an increase in the use of slurs and derogatory language, along with disturbing incidents involving swastikas, Nazi salutes and Confederate flags."

In a "60 Minutes" interview, Trump told any of his supporters who were harassing minorities to "stop it."