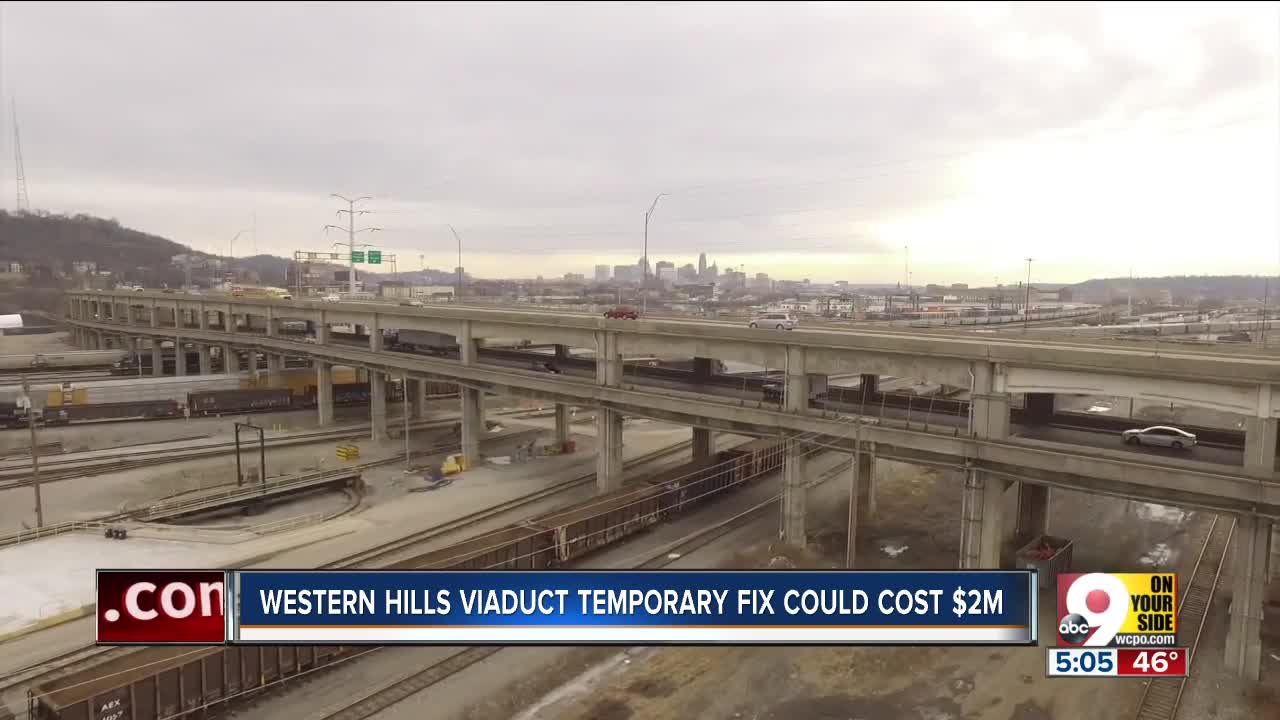 Crumbling concrete on the Western Hill Viaduct is a safety concern for many city council members, and it’s why the group is considering adding temporary safety netting as it awaits funds to replace the bridge.

CINCINNATI — Crumbling concrete on the Western Hill Viaduct is a safety concern for many City Council members, and it’s why the group is considering adding temporary safety netting as it awaits funds to replace the bridge.

The netting, though, could cost about $2 million. If the multi-million-dollar price tag sounds like a lot, that’s because it is — a similar fix for netting on the Roebling Bridge was less than $100,000.

But according to Vice Mayor Christopher Smitherman, when evaluated in context, it’s a $330 million project that could potentially save lives.

“The goal would be not to allow any pieces of concrete to fall and hit people’s car,” he said Thursday.

The Western Hills Viaduct is 88 years old and concrete chunks are falling off, endangering those who drive and walk on the bridge.

For those who travel on or under the Western Hills Viaduct, the need to replace the structure is evident.

“I don’t really feel like (a rock) is going to fall off and hit me in the head, but it is a possibility,” said Yoshua Yisrael, who walks under the bridge almost every day.

According to Smitherman, the viaduct’s lower deck area faces more problems in the cold winter months, when concrete could periodically fall. Netting would protect cars and pedestrians from the crumbling pieces, but the fix would be temporary.

City Council approved Smitherman’s motion to find the funds for the project, which he said is now an “emergency situation.”

The Ohio Department of Transportation (ODOT) gave the viaduct a condition score of 4 out of 9 — 9 being the best and 0 being the worst. The rating is considered “poor” by ODOT standards. Although Smitherman sees the temporary fix as urgent, ODOT has said the netting would make it difficult for them to keep an eye on the viaduct’s worsening condition.

“This is so serious for me, I have no problem pulling (the money) from our reserves,” Smitherman said. “That’s frowned upon, but when you’re talking about loss of life, I think this is where you pull money from.”

It’s unclear when a permanent fix could be on the way. Both the city and county have put aside millions, but total reconstruction will be hard to do without federal funding.

Voters will have the chance in November to vote on a transit levy which would help fund a replacement bridge.