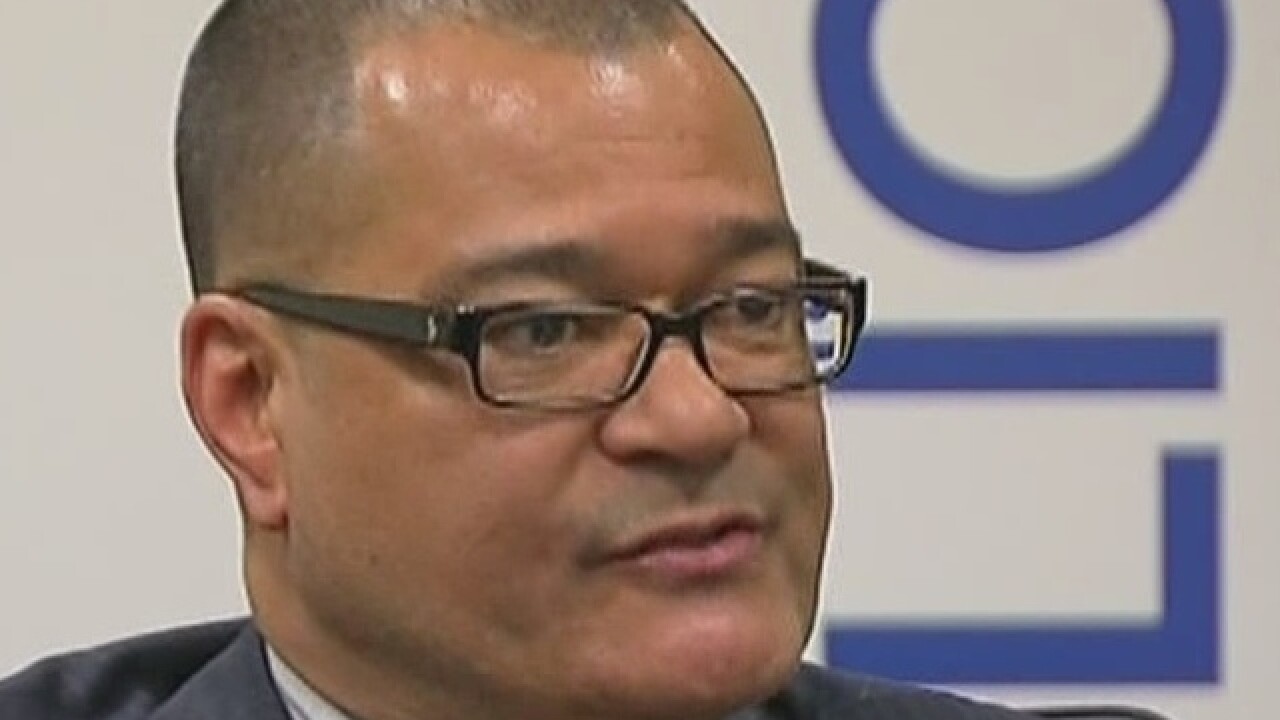 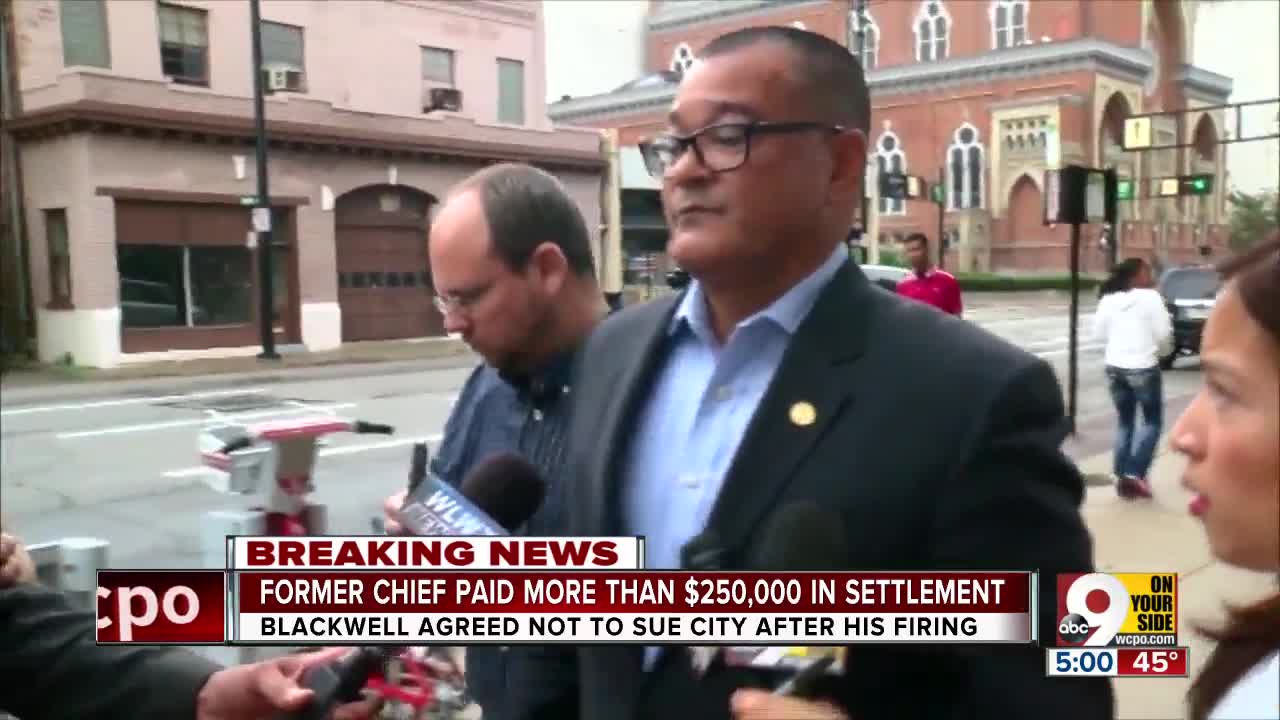 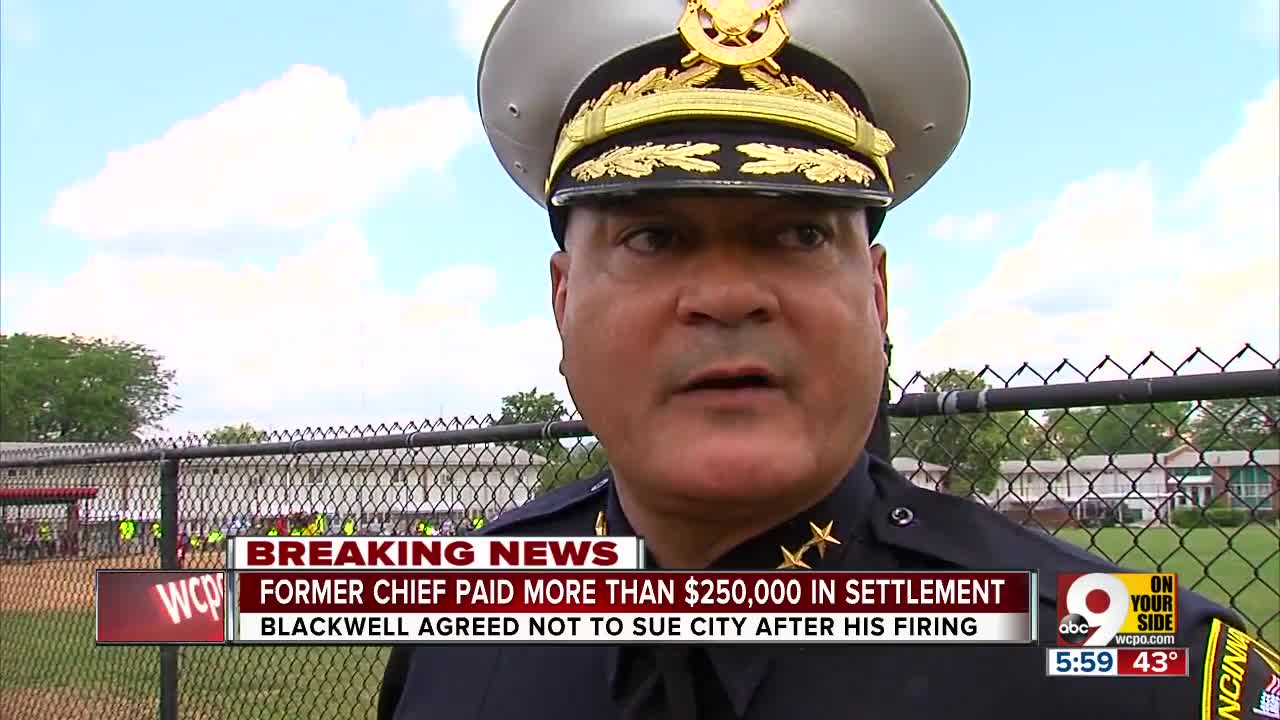 CINCINNATI -- The City of Cincinnati agreed to pay former Police Chief Jeffrey Blackwell 1.5 years' salary plus a $10,000 bonus and other costs as part of a settlement agreement over his termination from the police department.

The settlement was signed in August 2016, nearly a year after City Manager Harry Black announced that Blackwell was fired.

Under the terms of the agreement, which was released in response to public records requests, the city agreed to pay Blackwell $170,850, reimburse him for a year of health care and pay his attorneys $84,150, in addition to other terms.

In exchange, Blackwell agreed to not sue the city or file any other complaints related to his employment with the city. As late as April, Blackwell had said he planned to sue the city over the way he was dismissed.

"Jeffrey Blackwell asserted several claims against the city. None of these claims were considered meritorious by my office," City Solicitor Paula Boggs Muething said in an emailed statement. "Nevertheless, given the costs and inherent uncertainty of litigation, the city reached a favorable resolution of the issues and avoided a protracted lawsuit that would have burdened and distracted city officials from their mission of serving the people of Cincinnati."

In a tweet, City Council member Chris Seelbach said the council had never been informed of the settlement.

Individual settlements are never brought before the council unless a settlement exceeds the amount budgeted because the authority to settle claims rests with the law department and city manager, according to Black. Officials appropriated $900,000 for settlements this year.

"There is no process or requirement that settlements be sent to the city council for approval or notification," Black said in an expanded revision of an earlier emailed statement. "However, while not part of our formal process, in light of the extraordinary nature of this particular settlement we should have thought to provide notice.

"Moving forward, if the council were to request periodic updates on legal settlements, this would be viewed as a reasonable request and we would be glad to oblige," Black said.

Vice Mayor David Mann said he had also been unaware of the settlement and was "very upset."

"Several times I inquired whether there was going to be a settlement," Mann said. "I was told directly by the city manager that there will not be a settlement. Having asked that, I would have expected to be told when that position was changed, but I wasn't."

Mann questioned why the city would need to settle with an employee who "was appropriately terminated for poor performance."

"If you settle for over a quarter of a million dollars, that raises questions whether the original decision was supported or not," Mann said.

A spokeswoman for Mayor John Cranley said he had no part in the settlement, but had been aware of it when it was reached.

Councilmember Kevin Flynn wrote in an email that the final agreement was similar to one negotiated in May 2015, but Blackwell "repudiated it."

In a copy of an eight-count complaint Blackwell sent to the city but never filed, he laid out his issues with city officials.

Blackwell accused Cranley of "abuse of power" and Black of "illegal conduct," alleging a "conspiracy that resulted in the destruction of [Blackwell's] long and distinguished career as a law enforcement professional."

The complaint states that, during meetings in May 2015, Black pressured Blackwell to resign and said that Cranley was "the boss" who wanted his "own man" and believed Blackwell was a "bad fit" for police chief.

After Blackwell refused to resign, Cranley and black "began a campaign to assassinate his character," according to the complaint.

Blackwell was then terminated in September 2015 "without warning and due process," the complaint states.

After Blackwell's termination, officials named Eliot Isaac as the new chief "to avoid public pressure from the African-American community," according to the complaint. Isaac, like Blackwell, is African-American.

In a statement released Thursday, Black reiterated the reasons for Blackwell's dismissal that he had released in a memorandum at the time: "disarray" and low morale in the police department.

"All of this not only jeopardized the overall effectiveness of a nationally renowned police department, but also put in jeopardy the overall safety and well-being of our residents," Black said.

At a news conference Thursday, Cranley also called the allegations in the complaint "all categorically false."

"Mr. Blackwell's failing leadership of the police department was putting the safety of our citizens at risk," Cranley said.

Blackwell's name returned to headlines recently after emails between Cranley and Chicago Mayor Rahm Emanuel were released as part of a settlement with a government watchdog group seeking Emanuel's emails.

In one email, Cranley referred to Blackwell as "a bad chief." However, that email was dated Dec. 4, 2015, prior to the signing of the settlement agreement promising to not disparage Blackwell.

Read the full agreement below:

Release and Settlement Agreement - Blackwell by James on Scribd