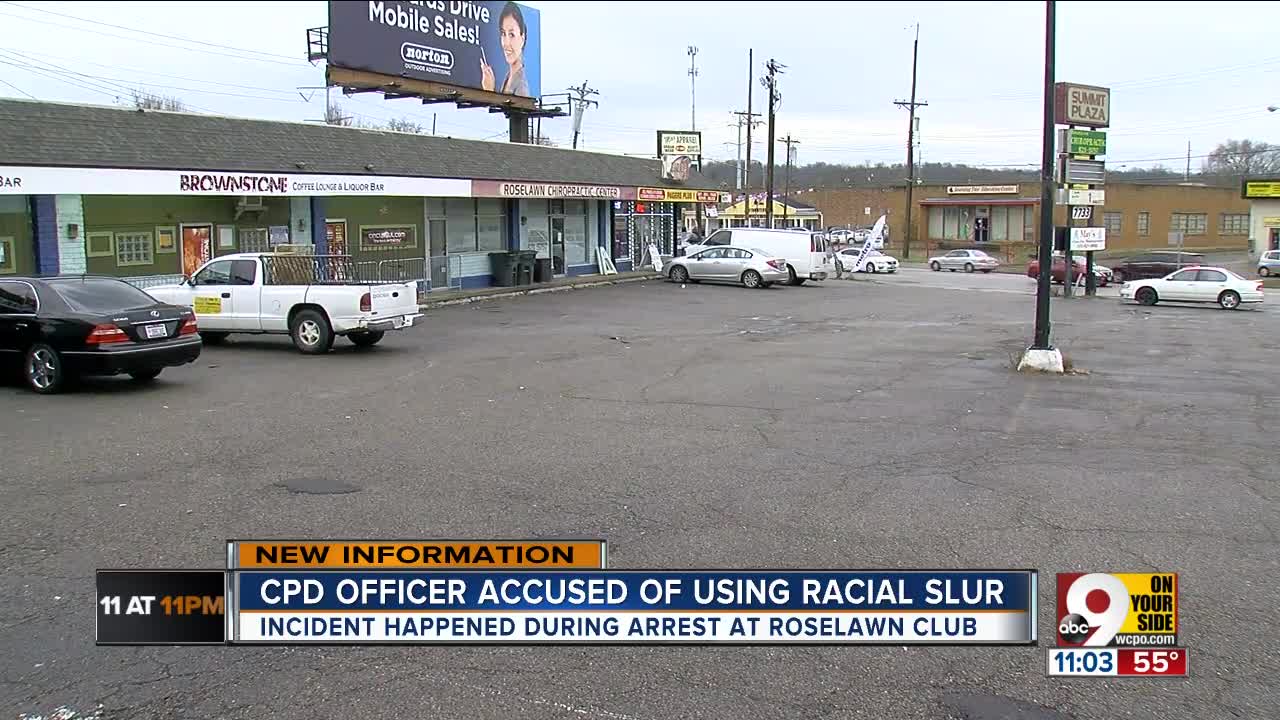 A Cincinnati police officer is being investigated and has been restricted to desk duty after he was heard using a racial slur during an arrest, according to city officials.

CINCINNATI — A Cincinnati police officer is being investigated and has been restricted to desk duty after he was heard using a racial slur during an arrest, according to city officials.

In an email to City Manager Patrick Duhaney, Police Chief Eliot Isaac wrote that Officer Dennis Barnette said "the 'N' word" while arresting a woman at the Brownstone Nightclub in Roselawn Saturday night.

The woman was resisting arrest and pushed an officer before Barnette said the slur, Isaac wrote.

Barnette could be heard saying the slur on a recording from another officer's body camera, according to the email. Isaac referred the incident to the Internal Investigations Section. While on desk duty, Barnette's policing powers have also been suspended.

"This type of behavior is unacceptable and will not be tolerated inside the department," Isaac wrote.

In another email to the City Council, Duhaney wrote that he shares Isaac's concerns about the incident.

"It is unacceptable and not in line with the standard of conduct we expect from City employees," he wrote.

At a City Council committee meeting Thursday, Councilman Chris Smitherman shared similar sentiments, and added that the actions of one officer should not reflect on all others.

"If an officer did use that, it is absolutely unacceptable," he said.

Yolanda Miller, the mother of the woman at the center of this investigation, is on the executive board of the Cincinnati NAACP, and says what happened to her daughter at the Brownstone Nightclub cannot happen again.

"He was wrong," she said. "He does not deserve to be a police officer in Cincinnati, Ohio, but not only in Cincinnati, anywhere, because if that came out with her, it's in his heart."

Her daughter is facing charges of assaulting an officer, but Miller says no matter how the event unfolded, there's no excuse for this language.

The Cincinnati chapter of the NAACP issued a statement as well, stating they "strongly condemn the racist comment from Cincinnati Police officer Dennis Barnette."

Miller and the NAACP are calling for Barnette's termination. "The use of a racial slur has no place in society," the NAACP's statement says. "The word is hateful, and coming from someone with the authority to use deadly force, is dangerous tho those whom he is sworn to serve and protect."

WCPO has reached out to the Cincinnati Police Department for the body camera video in question, but have been denied as the investigation is ongoing.