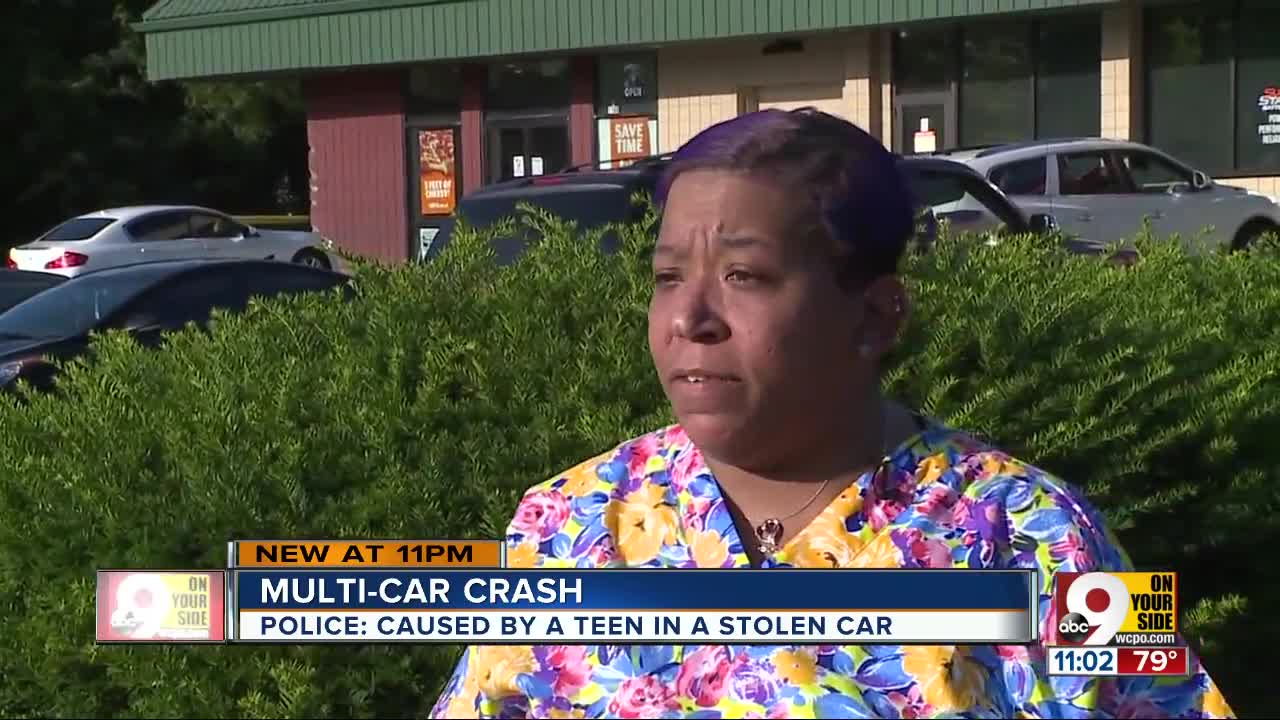 A teenage boy’s joyride in a stolen car ended in a police chase and a four-car pileup at the intersection of West Galbraith and Daly Roads Thursday afternoon. The driver and one victim were hospitalized in the aftermath, according to police. To the admitted surprise of two witnesses, no one was killed.

CINCINNATI — A teenage boy’s joyride in a stolen car ended in a police chase and a four-car pileup at the intersection of West Galbraith and Daly Roads Thursday afternoon.

The teen now faces a dozen charges including resisting arrest, operating a vehicle without a license and reckless operation.

The teen driver and one victim were hospitalized in the aftermath, according to police. To the admitted surprise of two witnesses, no one was killed.

Sabrina Meadows said she had just picked up her 3-year-old from daycare when the teen in the red Honda Civic came flying down the wrong side of Winton Road. Police said he had originally stolen the car from Forest Park.

Meadows moved out of the way in time to dodge him, she said, and to watch a Springfield Township police car speed by on his tail.

“'He’s about to cause an accident,'” she recalled saying to her mother. “No longer than I said that, boom.”

Boom was the teen striking the first car in his path hard enough to knock the axles and front wheels off. Pure momentum carried him into the second and third before his own vehicle capsized.

He tried to pull himself out of the wreck through a broken window as police converged on the scene, according to both Singh and Meadows.

He didn’t make it far.

“(Police) snatched him up off the ground, cuffed him, threw him in the back seat of the car,” Meadows said. “They had every right. He had the whole seatbelt indentation in his chest.”

One of the victims was driven to a nearby hospital for evaluation, although police said they were not seriously injured. The teenager was taken to Cincinnati Children’s Hospital.

The teen, who WCPO isn't naming because of his age, appeared in Hamilton County Juvenile Court Friday. His next court hearing was scheduled for July 8. Until then, he'll be held at the juvenile detention center.

“He could’ve just killed people,” Meadows said. “He almost hit me with a baby in the car. He didn’t even care.

“He had to do 100 miles per hour in that little Honda Civic,” she added. “I didn’t even know they moved that fast.”