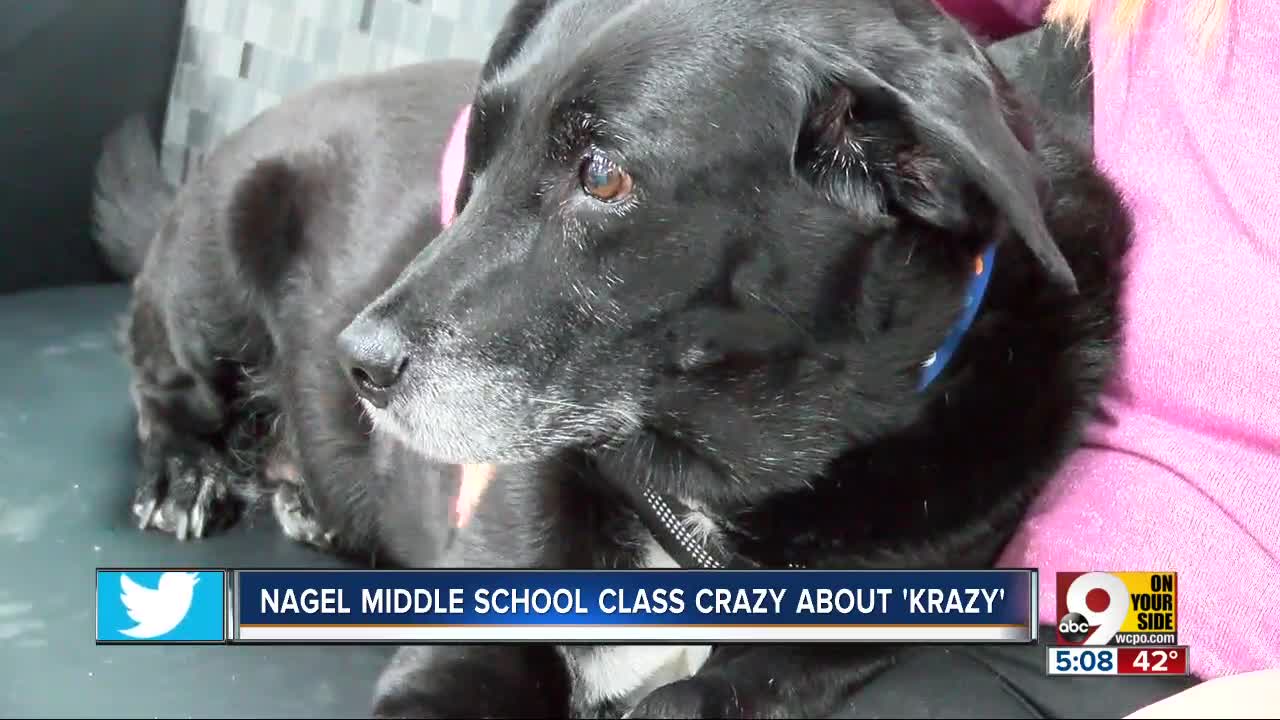 When the seventh graders learned that dogs can help decrease anxiety and loneliness, they wanted to bring one into their classroom. Enter Krazy — their new most popular (or is it pup-ular?) classmate.

ANDERSON TOWNSHIP, Ohio — Being the new student in class can be hard, but if you have four paws and a wagging tail, you're sure to be the school's top dog.

“Every day is, ‘Can Krazy come? Can Krazy come? Is Krazy here today?’" said Tonia Kincaid, imitating the students she teaches at Nagel Middle School.

That’s because “Krazy,” the 10-year-old black lab mix that Kincaid brings to her seventh-grade math class, is a hit with students. But she’s far more than a class pet — she’s a calming presence that helps students focus and recenter.

"The kids are really calm with her,” Kincaid said. “They'll work, she just roams around the classroom, and they pet her. She'll sit on the couch with kids."

Seventh-grader Ashley Huebner said she gathered her classmates to research the benefits of having a dog in the classroom. They learned that dogs decrease anxiety and reduce feelings of isolation, issues that many preteens are already experiencing.

"I definitely think it makes people a lot happier and a lot more excited to come to school,” Huebner said. “And also I think she's pretty calming."

The students presented their research proposal to the school principal, and after meeting with the school nurse — and 109 permission slips later — Krazy got the green light to come to the classroom.

Seventh-grader Connor Bergman agrees that Krazy helps calm him down and forget stress.

“I feel like a lot of different people have different stresses and stuff like that from school, so I think it's really nice for her to come in and people can calm down on her, especially if they don't have such a great home life," Bergman said.

“I had a student, had a bad day literally about throwing things — really shaking upset. I said, ‘Hold on,’ pulled Krazy out in the hall, and we were sitting on the floor petting, and that kid went from a 10 to a 2,” Kincaid said. “It was pretty great."