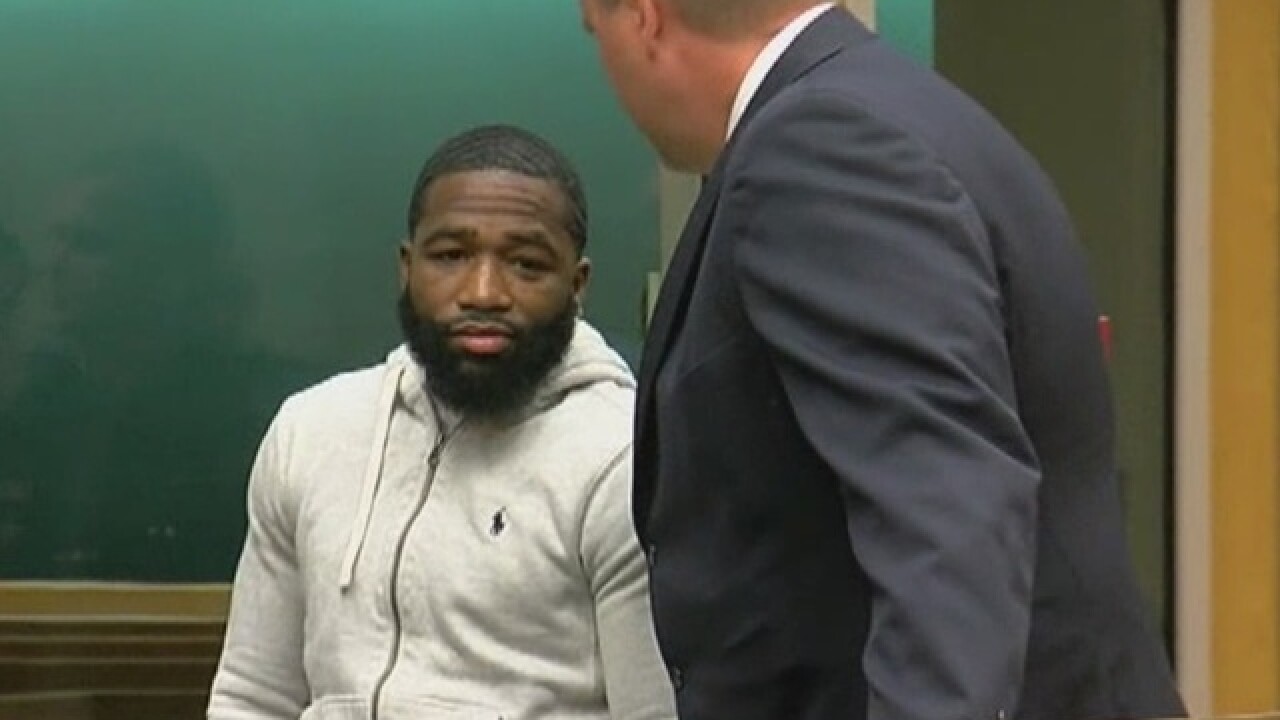 Broner, a champion boxer, was arraigned in Hamilton County Tuesday after turning himself in on Monday morning. He was a walk-in to court and is not custody, his attorney said. He was given a $50,000 bond.

Broner is accused of assaulting a man outside of Madison Bowl in Oakley.

Christopher Carson of West Chester Township said Adrien Broner beat him up in the parking lot of Madison Bowl in Oakley in January. Carson said the boxing star lost thousands of dollars to him on bets over the course of an evening, according to a lawsuit filed last month in Hamilton County Common Pleas Court.

The lawsuit accuses Broner of assault, battery, civil theft and intentional infliction of emotional distress for the January incident.

Court documents obtained by WCPO said the most recent accusations made against Broner is corroborated by video and witnesses.

"Broner struck [Christopher] Carson in the face with a closed fist causing injury. Broner then retrieved a handgun from his vehicle, approached the victim, demanded money, then struck Carson in the face with a closed first a second time, this time causing Carson to be rendered unconscious. Broner was then observed taking money out of Carson's pockets while he was unconscious before fleeing the scene."

Broner was training in Washington, D.C., when the Hamilton County Prosecutor's Office issued a warrant for his arrest.

He still went through with the fight on Friday night -- although he missed weight and had to change opponents -- and won, but his attorney said he planned to turn himself in to police on Monday.

After he bonded out Monday morning, Broner's only remarks for WCPO's cameras was "Vote Donald Trump." (Watch the video below)

Broner's unsolicited Trump endorsement wasn't too out there when considering the boxer's history; he's garnered attention not just with wins, but with his brash and flamboyant personality.

Broner also notoriously left with Paulie Malignaggi's ex-girlfriend (and bragged about it) after beating him in a fight. That incident earned Broner a spot on the list of "most loathed athletes in the world" at the time, penned by Bleacher Reporter writer Joseph Zucker.

Not unlike other athletes, Broner loves to show off stacks of money on social media.

Mixtape out right now on @mymixtapez "About Time" ... Song playing is called "on the hush" #Aboutbillions

A video posted by Adrien Broner (@adrienbroner) on

But people love to watch him -- literally. More than a million people watched his fight on Friday night.

Records are made to be broken #AboutBillions I wanna thank all my fans I couldn't have done it without you ......

A photo posted by Adrien Broner (@adrienbroner) on