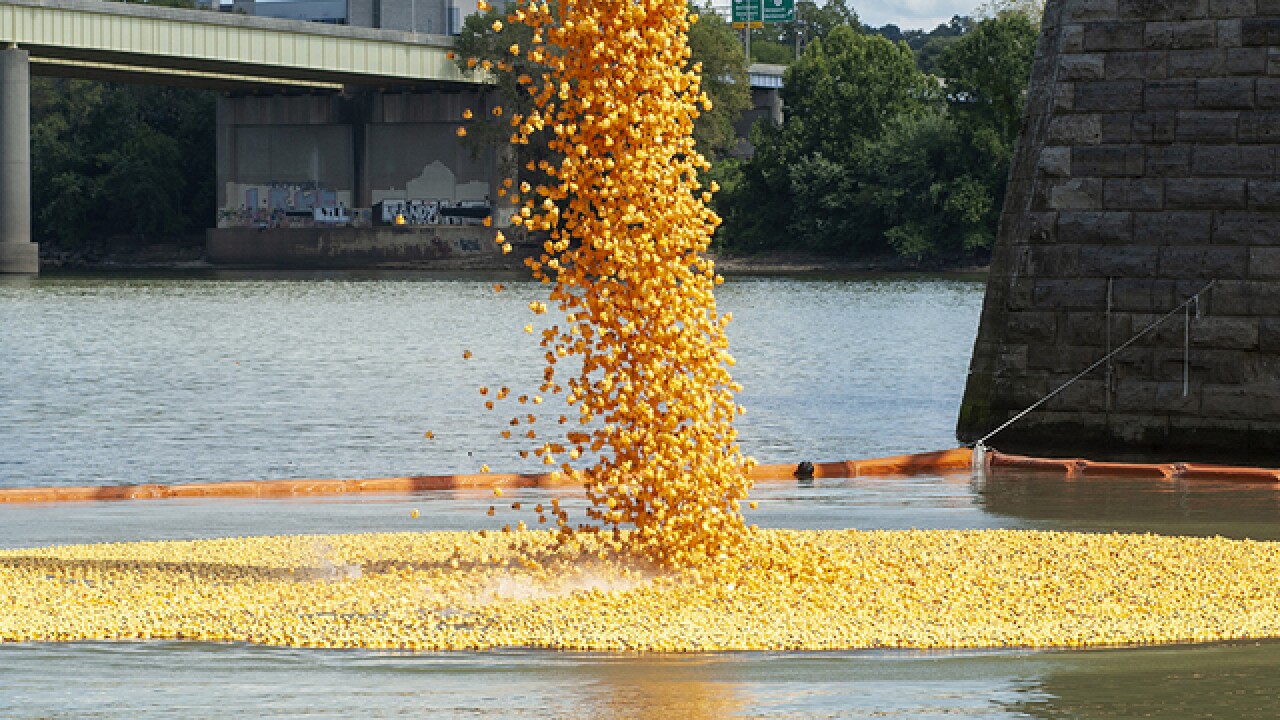 Copyright 2018 Scripps Media, Inc. All rights reserved. This material may not be published, broadcast, rewritten, or redistributed.
JOSEPH FUQUA II
In Cincinnati, Labor Day weekend is synonymous with Riverfest, an all-day party of 500,000 people at Sawyer Point and Yeatman's Cove Sunday September 2, 2018. Rubber Duck Regatta poured from the truck into the Ohio River. Photo by Joseph Fuqua II for WCPO

CINCINNATI — UPDATE: Due to storms, the duck drop has been moved to 2:30 p.m. Sunday.

For the 25th year, rubber ducks will drop into the Ohio River this Labor Day weekend.

The Freestore Foodbank will drop as many as 200,000 rubber ducks off of the Purple People Bridge Sunday in the country’s largest Rubber Duck Regatta, where the ducks will "race" along the Serpentine Wall.

Proceeds from each duck sold (and ceremoniously dropped from the bridge) help feed children who don’t know where they will get their next meal, which the Freestore Foodbank says is over 80,000 children in the Tri-State.

Last year’s event raised over $1 million, or the equivalent of 3 million meals, for Tri-State children. Since 1995, the event has raised enough money to give away more than 36 million meals.

The first prize duck will win a Honda CR-V and, if it's the “KEMBA Million Dollar Duck," a cool $1 million. Second place wins a year of free Kroger groceries, and five other winners will receive KEMBA Credit Union cash prizes.

Read more: 9 things to know before you go to Riverfest 2019

While it's a long-held Riverfest tradition, the Rubber Duck Regatta also helps kick-off Hunger Action Month, when Feeding America food banks “unite to urge individuals to take action in their communities throughout September to help fight hunger in America,” according to a release.