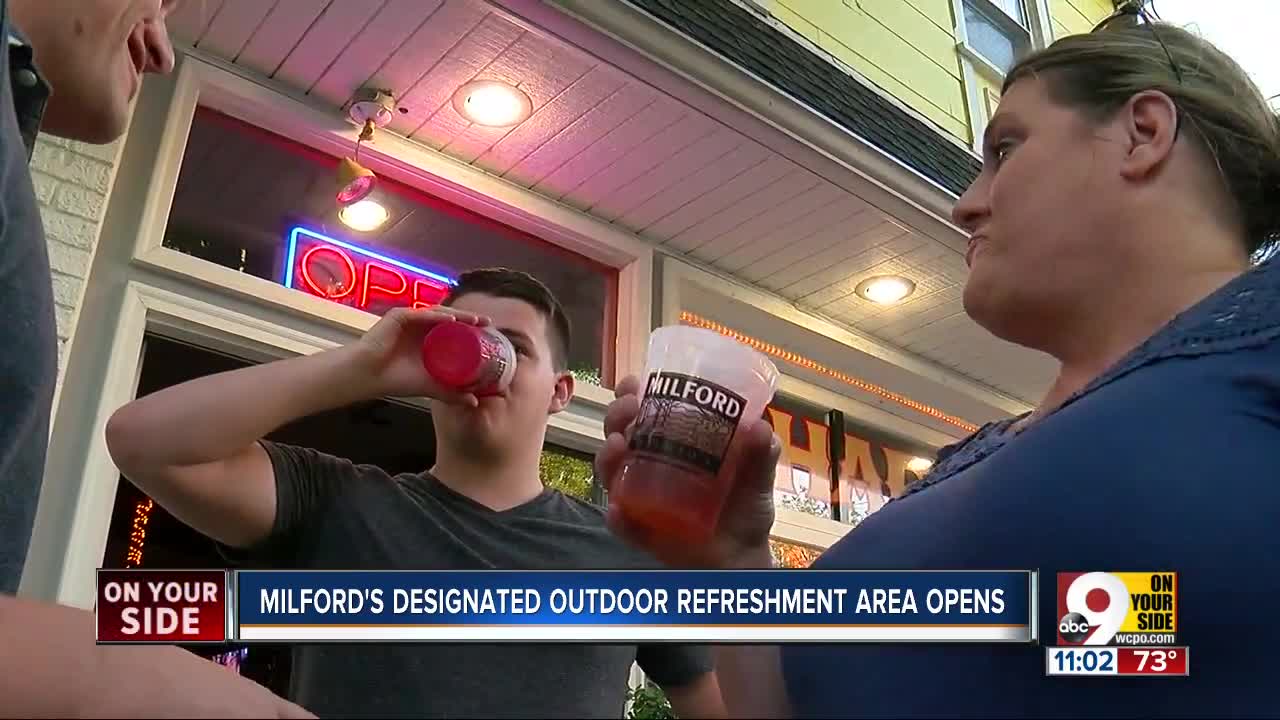 “It’s 5 o’clock somewhere” starts at 11 a.m. in Milford. That’s when the city’s Designated Outdoor Refreshment Area (DORA) started Friday. The area will allow people to drink alcohol outside from an approved cup.

The small city spent Friday launching what downtown businesses hope will be a traffic-booster: The designated outdoor refreshment area, or DORA, where anyone can drink alcohol outside if they purchase a special $1 cup from participating businesses.

“It’s super relaxing,” customer Kevin Boggs said Friday evening, DORA cup in hand. “It’s nice to watch the sun start to set over the Little Miami, have a sip of beer. A cop rolled by, and I didn’t feel paranoid.”

The DORA encompasses Main Street from Little Miami Brewing Company to Copper Blue as well as parts of Lila Avenue and Water Street. (For those who struggle with geography, signs mark its boundaries.)

Cheril Baker, who manages Chappy’s Bar on Main, said she believes it will help draw people to the city and create a positive atmosphere downtown.

“They love it,” she said of her Friday night patrons. “They see that it’s fun and festive, and everybody’s coming and going and talking to each other and carrying on and having fun.”

The Milford DORA isn’t the first open-container entertainment district in Greater Cincinnati. The city of Hamilton launched its own DORA in 2018 and saw immediate positive results, according to city officials. Bar and restaurant patrons purchased about 6,000 cups in the programs in its first three months of existence.

Milford, like Hamilton, is chasing growth — more people out patronizing local businesses, more outside visitors coming to see what Milford has to offer.

Greg Reynolds, who works in the city, said he believes it will work.

“It’s great,” he said. “Being able to enjoy warm weather like this, walking around outside — it’s got to bring more people in the city, so I think it’s a great idea.”

DORA is in effect from 4 to 10 p.m. Monday through Thursday and 11 a.m. to midnight on Friday through Sunday.