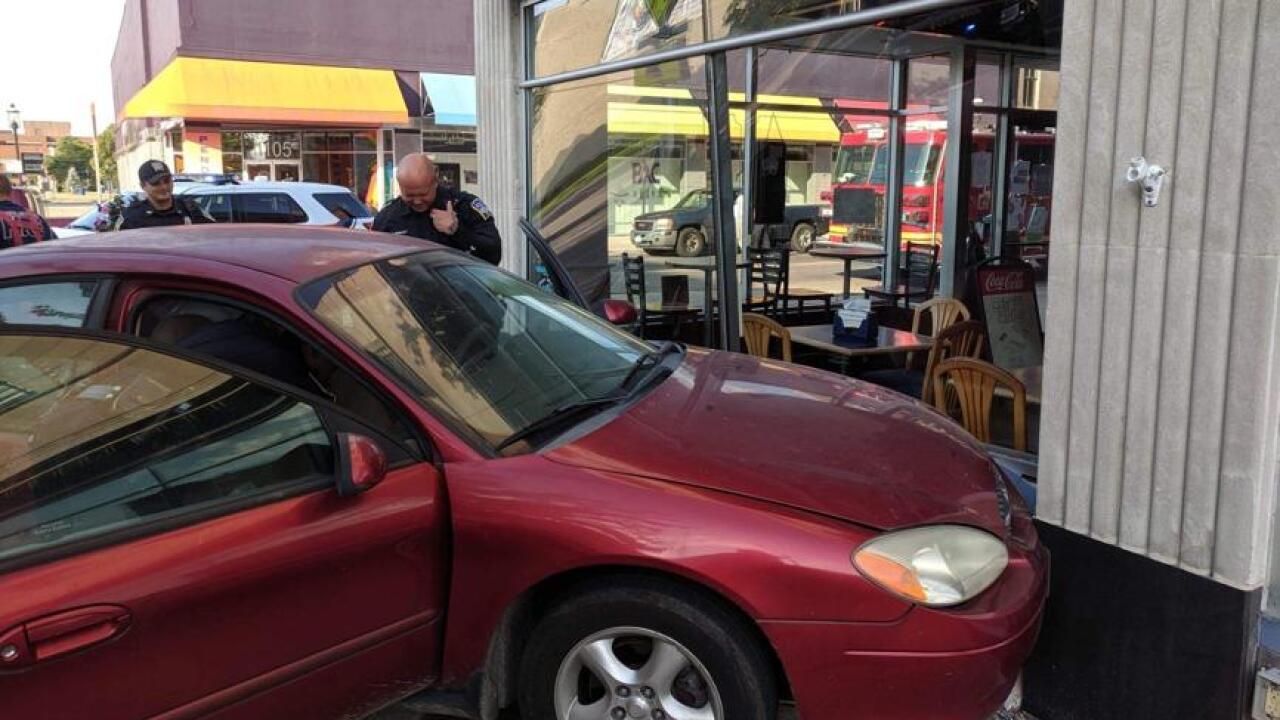 A car crashed into Triple Moon Coffee Company, 1100 Central Ave., around 5 p.m. Sunday after the male driver and female passenger were involved in a domestic violence situation at Hueston Woods State Park.

MIDDLETOWN — A $10,000 cash or surety only bond was set this morning for a Middletown man who jumped out of his car with his girlfriend and daughter inside seconds before it crashed into a popular Middletown business.

Estiv Guevara, 31, was charged with a domestic violence warrant, driving under suspension, reckless operation, obstructing official business, unlawful restraint, and motor vehicle unattended, according to a police report obtained by the Journal-News.

Estiv Guevara, 31, faces multiple charges after arrested when his vehilce crashed into a Middletown coffee shop.Visiting Judge William Wolff Jr. set Guevara’s bond during his arraignment in Middletown Municipal Court. His case was continued until Aug. 5, according to court documents.

Middletown police were dispatched to the area of Central Avenue and Carmody Boulevard at 6:41 p.m. Sunday after a caller alerted the Butler County Sheriff’s Office about a possible disturbance in a vehicle. Police said when they made eye contact with Guevara, the driver of the 2001 Ford Taurus, he “accelerated at a high rate of speed,” according to the police report. He began “driving recklessly” toward downtown, the report read.

While the car was rolling, Guevara got out and started running through downtown, police said. His vehicle crashed into the northwest corner of Triple Moon Coffee Company, 1100 Central Ave. There were two people in the car, a 34-year-old woman and a 10-year-old girl, police said.

Guevara was quickly taken into custody.

The woman told police that Guevara was being aggressive, grabbing her and holding her “against her will,” the report read. The child told police she hit her head on the passenger head rest.

A domestic violence incident at Hueston Woods State Park in College Corner led to a car crashing into a popular Middletown downtown business Sunday night, according to the Butler County Sheriff’s Office.

The sheriff’s office received a call about the domestic incident and was en route to catch up with the suspect’s vehicle, said Sgt. Kim Peters. She said the BCSO was unable to get to the car before it drove into Middletown.

The car hit Triple Moon Coffee Company, 1100 Central Ave., shortly before 5 p.m. leaving a hole at the bottom front of the building and pushing in the front window. The building, owned by Triad Investment Group, was inspected Sunday night, and Heather Gibson, the shop’s owner, was allowed to open as usual this morning.

After crashing, the driver of the car, a male, fled with Middletown police giving chase, according to Peters. A female passenger was transported to a local hospital with unknown injuries.

Triple Moon Coffee Company, 1100 Central Ave., opened this morning after it was hit by a car Sunday night. Heather Gibson, the owner, said she felt “blessed” the was shop was closed when the accident occurred.

Gibson said the incident could have been much worse if the coffee shop was open. Triple Moon closes at 3 p.m. on Sundays. She said the car could have hit people sitting on the patio or inside the booth next to the window.