Read the full report, response from captains' attorney below 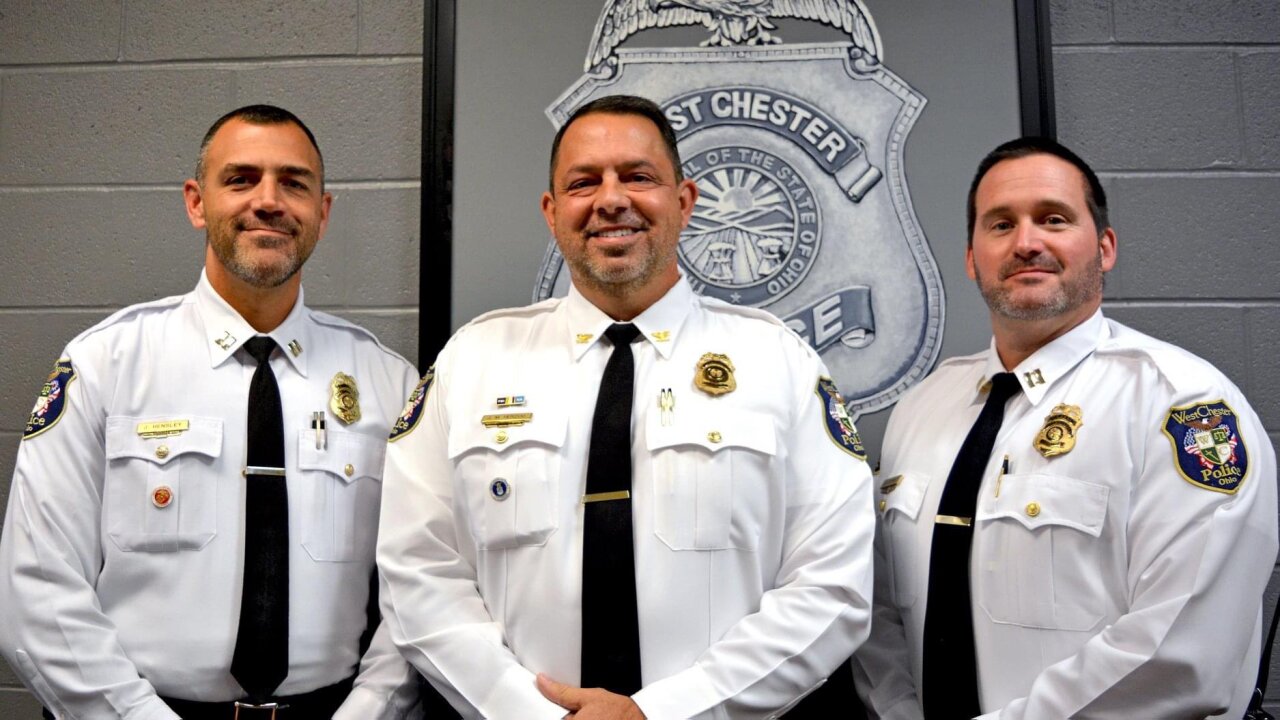 Copyright 2020 Scripps Media, Inc. All rights reserved. This material may not be published, broadcast, rewritten, or redistributed.
West Chester Police Department
West Chester Police Chief Joel Herzog is flanked by Captain Jamie Hensley and Captain Joe Gutman, two commanders in his department who are now accusing him of misconduct including racism, sexism and retaliation. Capt. Hensley has since resigned from his position.

An independent investigation into complaints that West Chester police Chief Joel Herzog had been racist, sexist and retaliatory toward a pair of high-ranking subordinates found slim evidence of such behavior, attorney Douglas Duckett wrote in a report to the township’s board of trustees.

Instead, according to Duckett, it uncovered dysfunction, resentment and “a near-total breakdown in communication” within the department’s command structure – some of which had motivated one of the complainants, former Capt. Jamie Hensley, to retaliate himself by spreading a false story of Herzog wearing blackface in a deleted Facebook photo.

West Chester’s trustees will decide what happens next.

The report recommends a performance improvement plan for Herzog, who admitted to making careless and insensitive comments to people he considered friends within the department, but finds he did not retaliate against his captains, appear in blackface or mishandle investigations as the two captains had claimed.

Duckett wrote that Hensley lied to investigators about the blackface photo but can no longer be disciplined because he retired on June 23.

The trouble started simply – with Hensley, co-complainant Capt. Joe Gutman, and a female civilian employee who winked at Gutman during a celebration of Peace Officers Memorial Day.

The employee was known for winking at male and female colleagues in a friendly manner, Duckett wrote, but Gutman and his wife interpreted her behavior as flirtatious.

“An unmarried woman should never wink at a married man,” Gutman said in his 2018 complaint against her, according to the report.

Gutman and Hensley would later raise unspecified and unsubstantiated claims that the employee had “issues” in her background, complain that she stayed too late at the office and that walking out at the same time as male officers created the appearance of impropriety, and would claim that she dressed inappropriately for an office environment by wearing particular skirts and high heels.

In an interview with Duckett, Hensley made the false rumors about her background plain: “About promiscuity, that she had cheated or had affairs with other people’s husbands, had broken up marriages and that she couldn’t wait to work for a police department to find a husband,” according to Duckett’s report.

No other worker recalled seeing the woman in inappropriate clothing. Duckett described all of the complaints as “antiquated and sexist” at best, “frankly disgusting” at worst. Herzog asked the woman to stop winking but did not act on the complaints otherwise.

Shortly afterward, however, a social schism began to form at the department. The female employee perceived that Gutman and Hensley were deliberately avoiding her and leaving her out of conversations, including those that were work-related. Gutman and Hensley, in turn, began to believe than Herzog and Assistant Chief Brian Rebholz were retaliating at them for complaining. Herzog and Rebholz stopped inviting them to off-site lunches.

“I feel under-appreciated. I feel undervalued,” Hensley said in a Jan. 28, 2019 HR meeting. “I feel like I'm not trusted to do my job. I feel like I had more authority and decision-making power as a sergeant than I do now.”

However, the investigation found that neither captain could provide specific examples of exclusionary behavior that affected their work.

“Neither captain alleges any action that affected his pay, his rank, his continued employment or any other impact on his career with the West Chester police department,” Duckett wrote.

The growing fracture in Herzog’s relationship with the captains led to the tense HR meeting in January, to broader complaints about his behavior — including allegations that he had been racist and sexist in private conversations — and then to the investigation, announced in late June 2020.

Duckett’s final write-up of the investigation recommends performance improvement plans for Herzog, who did make casual comments that could be interpreted as racist or sexist, and for Gutman, who should be instructed to treat the female employee who unknowingly started the drama “in a warm, collegial, polite and kind manner.”

It also recommends a larger commitment to open communication in the department, which could prevent a repeat of the months-long conflict between Herzog and the two captains.

“Unless this dysfunction and ‘guerrilla war’ among the Police Department's command staff is stopped, and all involved commit to the hard work of making the individual changes necessary for that to happen, the situation is completely untenable,” Duckett wrote. “All involved need to understand that each person's continued employment depends on making the changes necessary to rebuild an effective work team.”

Elizabeth Tuck, attorney for Gutman and Hensley, called the report a "malicious, offensive, and defamatory" attempt to "discredit (the captains) publicly and destroy their impeccable reputations" after they made the "gut-wrenching decision to jeopardize their careers and expose racism, sexism, retaliation, and other wrongdoing at the highest level of the West Chester, Ohio Police Department."

Instead of addressing misconduct with the state attorney general, Tuck said West Chester Township "engaged a hired gun at taxpayer expense to defend itself" and the chief against claims of unlawful conduct.

"Captain Gutman and Captain Hensley stood up for what was right and legal. They cooperated fully over five days of exhaustive and often threatening, accusatory, and combative interviews - and they told the truth. In return the Captains got slammed. And the Chief will not even get a slap on the wrist, because he apparently did not understand why anyone would be offended by his patently offensive remarks and conduct," the statement read.

Read the full response from the attorney for Captains Gutman and Hensley: